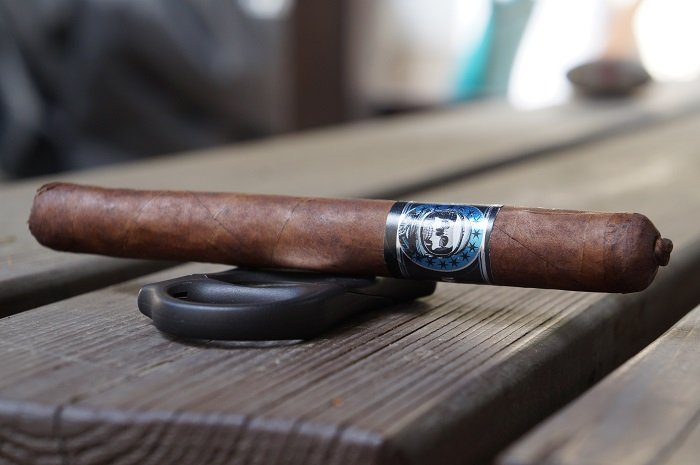 Aaron: The wrapper on the Black Works Studio Intergalactic Corona Larga is a mottled medium brownish-red with some decent sized veins that are well pressed. The seams are a bit raised while the caps are very well applied and finished with a tightly wound pigtail. The foot is also rounded off where the wrapper is just slightly longer the foot and folded over, but not anywhere close to creating a closed foot. The band is black, silver and blue and has an image of a skull in a space helmet along with the line and brand names. The aroma from the wrapper is a mix of wood, earth and stewed fruit while the foot brings wood and fig. The pre-light draw brings cedar and a very interesting floral perfume note along with a mid-level spiciness on my lips.
Seth: The Black Works Studio Intergalactic Corona Larga is constructed well, and it has a nice finish, but the wrapper itself is not attractive. The foot appears to have a subtle bell on the finish, and the cap has a lovely pigtail finish. Natural to Colorado Maduro in coloring, the cigar is soft and there are medium sized veins throughout. Aromas of cedar, cocoa, coffee beans and herbs. Strong coffee bean notes.
John: The Black Works Studio Intergalactic Corona Larga comes in cellophane and has a UPC sticker on the main body of the cellophane so it doesn’t get torn when the cellophane is opened. The cigar has a single band, and the wrapper is quite dark in appearance. For additional artisanal complications the cigar has both a curly pigtail cap and a partially closed food. Aromas from the cigar included bread, sweet tobacco, hay, old wood and a general barnyard underneath. From the foot, all I could pick up on was dry wood and sweet tobacco.
Jiunn: The Black Works Studio Intergalactic Corona Larga has a lot of flare: man bun, partially closed foot. The only thing missing is band(s) covering the entire wrapper. Speaking of the wrapper, the coloration is a cross between Colorado and Colorado Red with great oil content. Veins are well pressed, seams tight, bunch and roll even and head neatly finished off. Aromas from the wrapper and foot tell rich nuttiness, cedar and hay. Cold draw gives earl grey tea and dry red pepper spice. 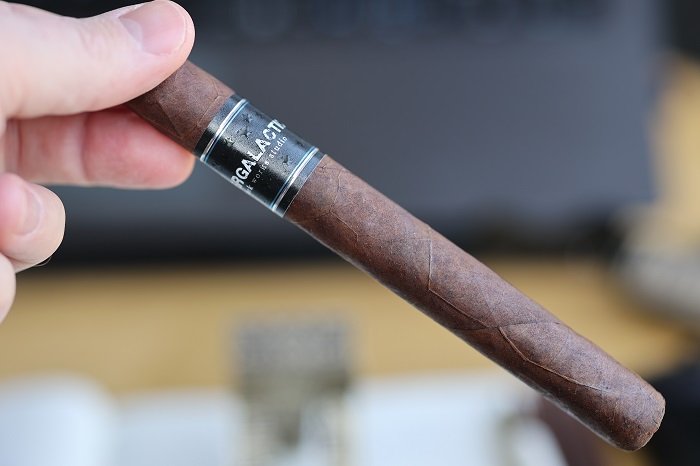 Aaron: The cigar begins with slightly dry toasted oak and a bold crushed red pepper spice. At a half inch in, the red pepper has morphed into black pepper and is not as bold. The retrohale brings slightly creamy oak with a bit of a black pepper bite. At an inch and a quarter, the pepper mellows some more as some dry earth joins the profile. As the third comes to a close, the profile is toasted oak slightly ahead of the dry earth with black pepper a bit behind. The strength was slightly below medium.
Seth: The first third starts out with this lovely herbal pepper flavor profile that is paired with some slightly sweet lemongrass qualities. Bits of dry wood as well. Very dry finish. Medium in strength and body.
John: The first third gets going with sweet wood, a vegetal flavor and delayed red pepper flake into the post draw. A medium strength earth comes through at the end of the draw after a few puffs. The red pepper flake migrates into the retrohale as it settles in. That red pepper flake continues to evolve, now present on the tip and sides of my tongue through the post draw. Some medium strength earth also joins the post draw to linger on my palate. Some time later, creaminess comes through on the retrohale to balance out the red pepper flake, and shortly after, citrus sweetness as well. There is more of an earth, almost toasted earth profile, as it continues towards the halfway point. Some wood takes up the center of the profile and lingers into the post draw at the halfway point.
Jiunn: There’s boldness of flavors to the first third in which if the draws are too intense, the profile can easily tip to harsh and acrid. But closely watching my draws, I’m getting big flavors of cedar, minerals, tongue lathering dry red pepper spice, leather and burnt toast. Full retrohales are rough but it’s the best flavor profile, providing subtle creaminess and sweetness of mixed nuts and intense dry red pepper spice. The finish leaves my palate salivating with toasted cedar. Strength is medium-full off the bat, and body is overall medium. 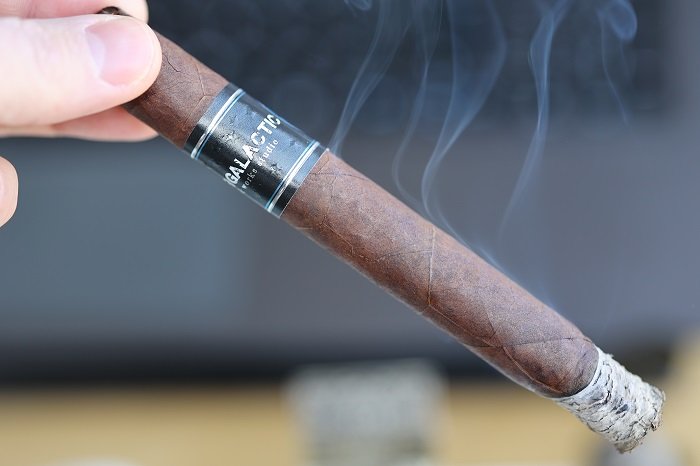 Aaron: The second third begins with the dry earth becoming even with the toasted oak. The retrohale is now a mirror image of the mouth draws. No changes through the third as the profile remains toasted oak and dry earth up front with black pepper a bit behind. The strength did bump up to medium.
Seth: The second third is in line with the first third. I am picking up this sweet herbal flavor that is paired with lemongrass and dry earth notes. There is some white pepper present on the finish, and it is still smoking at that medium level for strength and body.
John: A combination of baking spices and red pepper flake lead into the second third, as wood carries into the post draw with some dry components. Earth and red pepper flake join the post draw after a few puffs. Creamy wood comes through on the retrohale, and some subdued chocolate a few puffs later. As the second third continues, earth moves into the retrohale and post draw, becoming the primary flavor driver at medium to medium-plus strength.
Jiunn: The second third is equally bold in flavors, but the profile picks up a nice cherry note through the mouth draws. The cherries don’t deafen the boldness but more so adds an additional dimension to the profile. Strength ramps to full, while body is still overall medium. 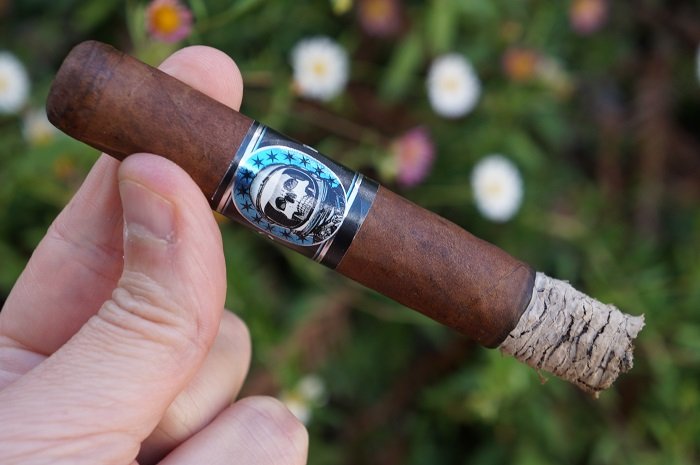 Aaron: As the final third begins, the toast level picks up a bit and a light chalkiness joins in. The retrohale is an even mix of toasted oak and dry earth with a slight black pepper bite. The cigar wraps up with the even mix of toasted oak and dry earth with black pepper a bit behind and light chalkiness in the background. The strength remained at medium.
Seth: The cigar finished in line with how the cigar had been smoking in the first and second thirds. Herbal notes with some white pepper and sweet lemongrass. Medium in strength and body.
John: Creamy red pepper flake leads into the last third, with earth and red pepper flake biting on the palate through the post draw. The earth almost immediately dominates the post draw once it has settled. Some bitterness is present by the halfway point, becoming earth focused with red pepper flake heat.
Jiunn: The final third becomes a bit too tinny in minerals and a burnt cedar shows. This creates a profile that is average and not as enjoyable as the first two thirds. Strength is still full tilt and body medium. 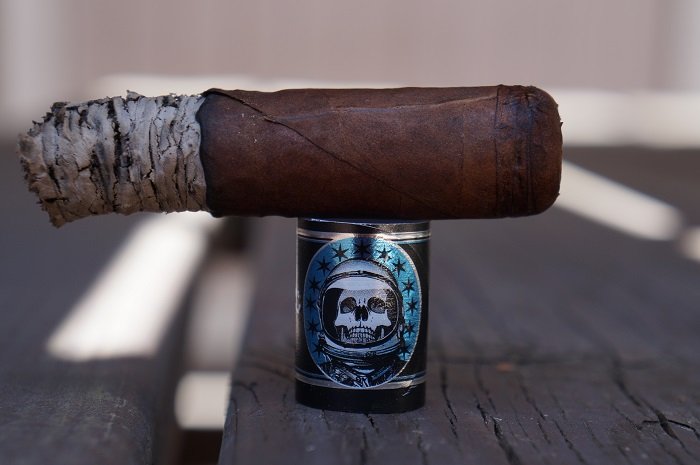 Aaron: The burn was straight throughout and the ash held on in inch and three quarter increments.
Seth: Burn was good throughout. At times a little off, but no real problems.
John: The burn was relatively straight through the first third, becoming offset halfway in. That offset burn resulted in unburned wrapper requiring a touch-up. No issues through the remainder of the review.
Jiunn: Flawless burn performance. Even burn, tight ashes, ample smoke production and cool burning temperature. 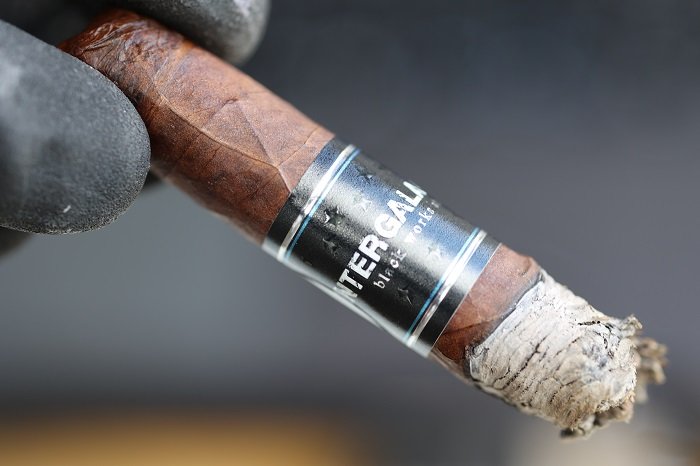 Aaron: The draw was slightly tighter than I prefer, but didn’t cause any issues with the smoking experience.
Seth: Draw was very nice.
John: The draw was perfect, right in the ideal zone between resistant and open.
Jiunn: Flawless draw performance. The ideal air flow and resistance.