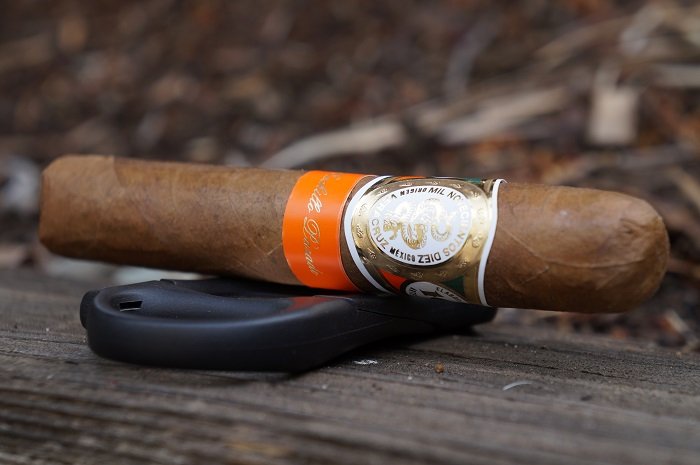 Aaron: The wrapper on the Casa 1910 Cuchillo Parado is a dull brown with some wrinkles and knotty veins. The seams are raised while the caps are well applied. There are two bands, with the primary being gold, green, white and orange and spelling out the company name. The secondary band is orange with gold writing designating the line. The aroma from the wrapper is a mix of dry cedar and dry earth while the foot brings wood, earth and smokiness. The pre-light draw brings cedar and smoky wood.
Seth: The Casa 1910 Cuchillo Parado is beautiful in hand. The wrapper has this lovely marbling to it, and there are some aspects that are Maduro, some Colorado, and some Natural. It has this light brown coloring with orange qualities. The cigar is firm in hand and the wrapper has a soft, gritty texture. Aromas of mesquite barbecue, oak barrels, dry earth, leather and pepper.
John: The Casa 1910 Cuchillo Parado comes in cellophane and has a UPC sticker that tears in half when the cellophane is opened. The cigar is double banded with a complex Casa 1910 primary band of gold on white, green and orange, and a secondary band that indicates ‘Cuchillo Parado’. Aromas off the wrapper included hay, dry plywood and dry earth. From the foot, I was getting sweet tobacco and hay.
Jiunn: The Casa 1910 Cuchillo Parado has a dull Colorado wrapper shade. Veins are decently pressed, seams tight, bunch and roll even but slightly lopsided and head well wrapped. Aromas from the wrapper tell cedar and hay. Aromas from the foot give amplified cedar and hay, as well as white pepper spice. Cold draw reveals hay, cedar, musk and a hint of metal. 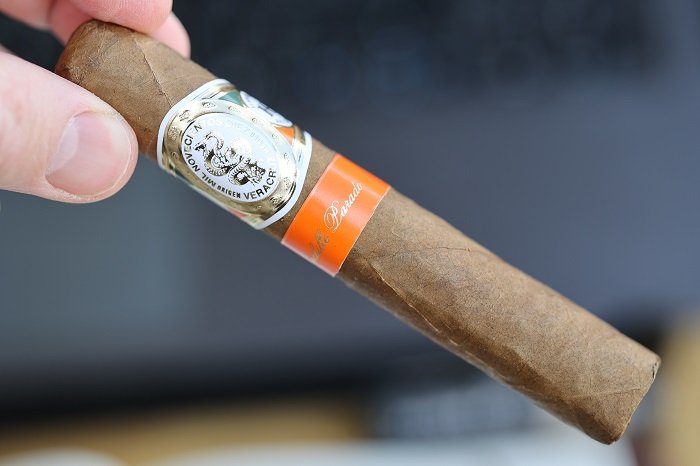 Aaron: The cigar begins with dry earth, bitter wood and sharp black pepper. At a quarter inch in, a light smokiness appears as the black pepper has lost its sharpness. The retrohale is dry earth, slightly smoky wood and mild black pepper. The third wraps up with dry earth up front, slight smoky and slightly bitter wood right behind and black pepper a little further behind. The strength was right at medium.
Seth: The first third has this lovely citrus and cream quality that is paired with floral and herbal notes. Some spice is present as well, along with some coffee. There is this lightness with the tobacco, but it still produces flavors, strength and body. Medium in strength and body.
John: The first few puffs brought flavors of dry wood, hay and a subdued, sweet chocolate. Hay and wood carry into the post draw each time. As the cigar progresses, bread, wood and mild baking spices develop through the retrohale. There are no more flavor evolutions through the first third.
Jiunn: The first third’s flavor profile is unique and weird. There’s bitter and dry dehydrated vegetables, synthetic sweetness and bitter cedar. Retrohaling gives dry red pepper spice without any of the weird and unique flavors. The finish is long with dry cedar. Strength and body is medium. 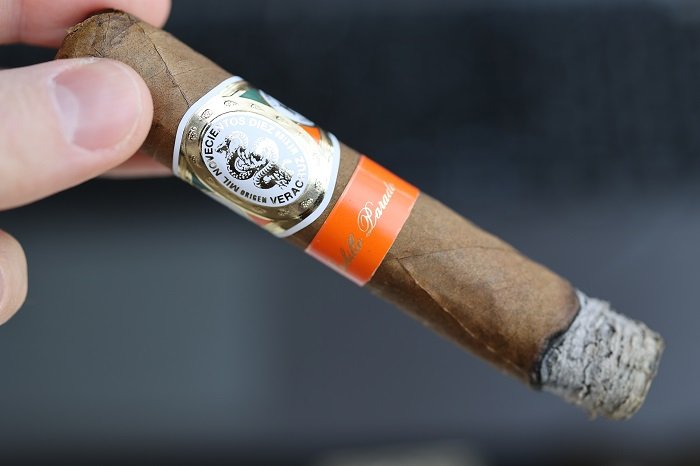 Aaron: As the second third begins, the bitterness departs. At a half inch in, the smoky wood gains a heavy toast. The overall profile is pretty dry. The retrohale is now dry earth, toasted wood and mild black pepper. At an inch in, the wood bitterness returns at a light level. As the third comes to a close, the dry earth is now even with the toasted, smoky wood, black pepper a bit behind and light amounts of bitterness and creaminess in the background. The strength remained at medium.
Seth: The second third delivers a flavor profile that has some musty wood, mushroom, floral and herbal qualities. There are cloves and sweet spice notes present, and it has some citrus and nutty notes on the finish. Medium in strength and body.
John: The second third begins with chocolate, wood and hay as the wood and hay carry into the post draw with some dryness on the palate. Sweet wood starts to define the center of the profile as it settles in. As the second third continued, light wood begins to drive the profile. Some mild chocolate and bread come through on the retrohale.
Jiunn: The second third tastes less unique and weird. But the overall profile is full of bitter cedar and generic synthetic sweetness. The mouthfeel has increasingly more tannins. Strength and body is still medium. 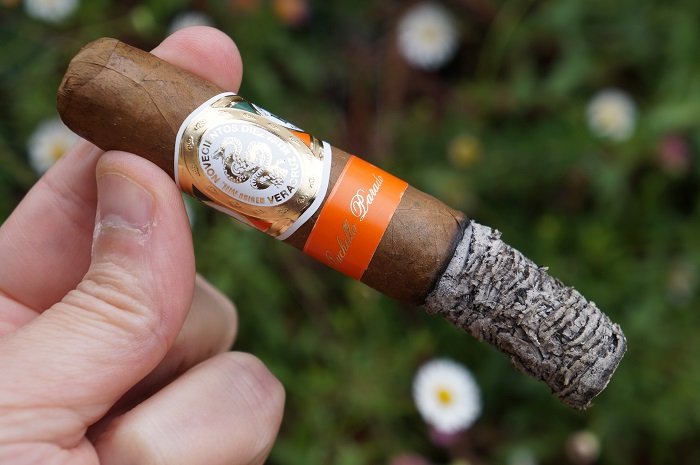 Aaron: The final third begins with a continuation from the second, with a slight uptick in the bitterness. The retrohale remains dry earth, toasted wood and mild black pepper. At three quarters of an inch in, the cigar warms up a bit and brings a light vegetal note to the profile. As the cigar comes to a close, the dry earth and toasted, smoky wood are even up front, black pepper a bit behind and light amounts of bitterness, vegetal and creaminess in the background. The strength bumped up to slightly above medium.
Seth: The final third delivers a flavor profile that has some musty wood, floral, citrus, cream and wood qualities. There are some pepper notes here and there as well, and it finishes around a medium level with coffee notes.
John: Light chocolate starts things in the last third, as hay and wood combine with dry wood making up the post draw. As the last third continued, the post draw hay picked up to medium strength. By the halfway mark, mild chocolate is the main flavor on the retrohale.
Jiunn: I feel the same way about this third as the second third. Full of bitter cedar, generic synthetic sweetness and mouth full of medium plus tannins. No changes to the strength and body, as it finishes the same medium. 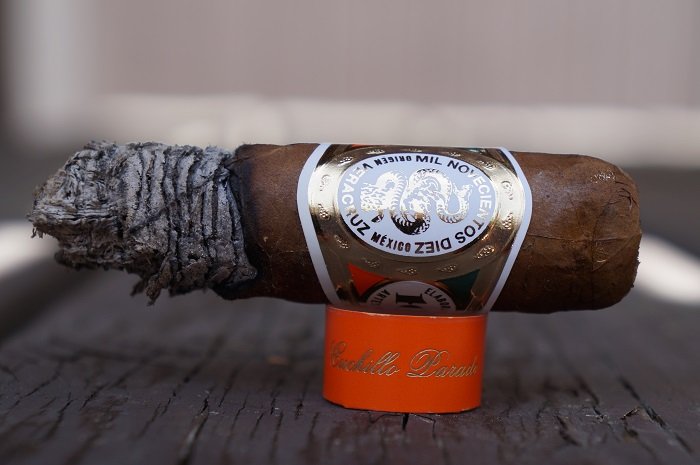 Aaron: Other than some waviness at the start of the first third which self corrected, the burn was straight the rest of the way. The ash held on in one inch increments.
Seth: Burn was off throughout. Never consistent.
John: The burn was fairly straight through the first third. A slight canoe formed moving into the second third, eventually requiring a touch-up. The remainder of the second third, and the last third were both straight. The ash held on up to one inch increments.
Jiunn: Burn performance was on point. Even burn, relatively tight ashes, good smoke production and cool burning temperature. 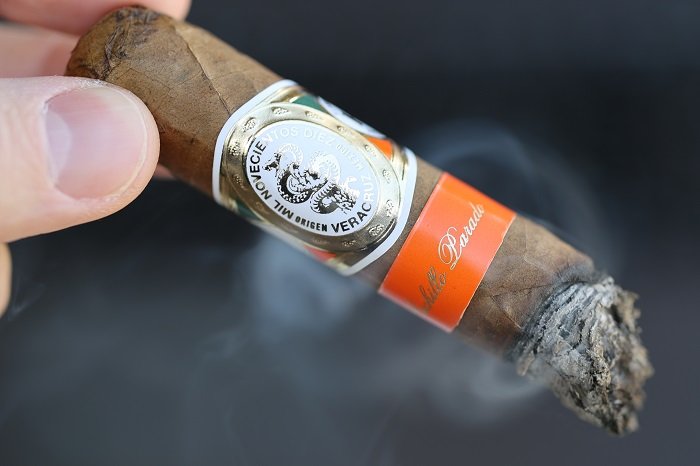 Aaron: The cigar began with dry earth, bitter wood and sharp black pepper. Some smokiness joined fairly quickly. The second third saw the bitterness depart for a bit and then return as well as the wood gaining a heavy toast. The final third saw a vegetal note join in as the cigar warmed up. Construction was near perfect. The Casa 1910 Cuchillo Parado had an average flavor profile throughout that is very rustic, focused around dry earth and wood. I appreciate the attempt at a Mexican puro, but it really needs something to break up the dryness and the earthy focus. While not off-putting, the profile isn’t all that attractive for me, so in combination with the very high price point, it isn’t likely that I’d return, but I would look for future Mexican forward blends from the brand.
Seth: This Casa 1910 Cuchillo Parado was a really fun smoking experience, and I enjoyed the blend thoroughly as well. I loved the complexities and profile delivered. The body and strength were perfect with the blend, and the whole profile had this lightness. It never felt to be too much. Balanced and not overwhelming. Truly enjoyable. I thought the blend was cruising in the second third, and the floral, coffee, nut, cream and citrus flavors were awesome. When you think of cigars, tobacco and Mexico; you think of a particular flavor profile. This cigar did not deliver that at all. It was the opposite. Very cool!
John: The Casa 1910 Cuchillo Parado started out with interesting flavor combinations in the first third that kept me engaged. As the review progressed, the profile became wood forward and pleasant but monotonous for the remainder of the second and last thirds. The draw was perfect, with the burn requiring a single touch-up to correct. Price point aside, there wasn’t much in the cigar that would put the cigar higher than just above average. Once you factor in the price point, I’d be unlikely to return to this offering. Total smoking time was much faster than I would have expected for a Robusto, at 1 hour and 25 minutes.
Jiunn: A cigar that is priced relatively high at $15 using all Mexican tobacco in itself is very intriguing and unique. But after smoking through the Casa 1910 Cuchillo Parado, I still think it was intriguing and unique but it does not taste good. The flavors are off centered and at parts strange. Rarely do I get notes like bitter and dry dehydrated vegetable. But after tasting this note so prominently, I know that it’s not an enjoyable note. A cool offering but not something I would care to revisit.