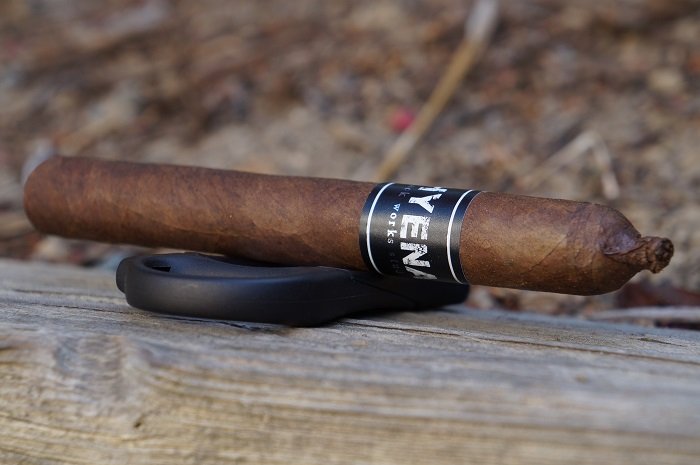 Aaron: The wrapper on the Black Works Studio Hyena Corona Gorda is medium brown with some darker marbling present. The seams are a bit raised while the caps are well applied and the head is finished with a thick nipple. The foot is half covered with excess wrapper folded over. The band has the brand and line name on one side and some artwork on the other side. The aroma from the wrapper is musty and smoky wood while the foot brings slightly sweet cedar and faint smokiness. The pre-light draw brings a light and airy cedar.
Seth: Toothy and marbled, the Black Works Studio Hyena Corona Gorda has this Natural, Colorado and Maduro coloring that is great. The wrapper is bumpy in texture and smooth. Not oily, but smooth. The cigar is firm throughout and I like the closed foot and man bun finish. Aromas of fruit and tobacco.
John: The Black Works Studio Hyena Corona Gorda comes in cellophane, with a UPC sticker placed on the main cellophane so it can’t tear in half when opened. Additional complications on the cigar included a twisted cap, along with a closed food. Nosing the cigar, I was able to pick out aromas of aged tobacco, mild mustiness and earth. Since the foot was closed, I wasn’t able to pick up anything unique there.
Jiunn: The Black Works Studio Hyena Corona Gorda has a rustic Colorado maduro wrapper shade. Veins are well pressed, seams tight, bunch and roll even and head well wrapped. Aromas from the wrapper give cedar and minerals. Aromas from the partially enclosed foot are the same as the wrapper with some added white pepper spice. Cold draw reveals airy cedar and dried nuts. 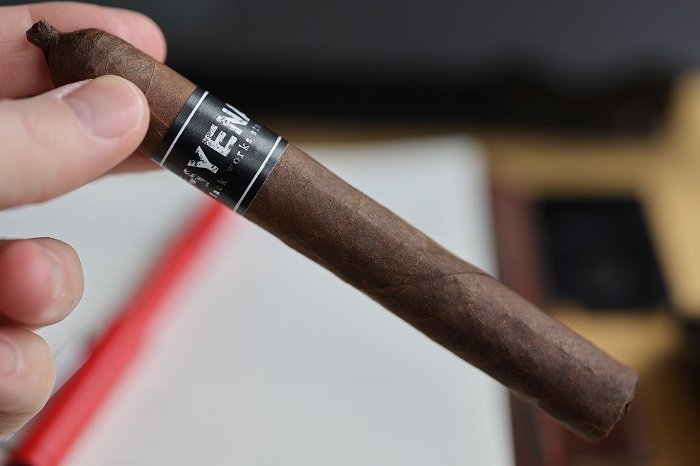 Aaron: The cigar begins with dry and lightly smoky oak along with mild black pepper. At a half inch in, the oak isn’t as dry and is now quite detailed in its delivery. The retrohale brings a musty and smoky oak. At an inch in, light amounts of mustiness and creaminess join the profile. As the third comes to a close, the lightly dry and smoky wood is up front with the black pepper a bit behind and light mustiness and creaminess in the background. The strength in this third was right at medium.
Seth: The first third opens with sharp spice notes. There is some cinnamon and red pepper up front. There are some floral, rich earth and coffee notes as well, and it is quite smooth. There is a long finish, and I would classify the cigar as full in strength and body.
John: My initial flavor impressions included mild sweetness, cocoa, a baking spice and cocoa combination, finishing with a creamy wood. There is a curious and interesting mildly sour citrus mixing into the finish as the cigar progressed. The baking spices moved up to medium, maybe medium-plus strength on the retrohale. I’m surprised at how mild this started out, considering much of the Black Works offerings I would describe as full or full plus. Brown sugar sweetness is identifiable on the retrohale, approaching the 15 minute mark. The post draw takes on a drying aspect on the palate by this point. That post draw dryness steps up in the bottom half.
Jiunn: The first third provides a nice contrast of sweet and spicy. A generous portion of cedar, game, baking spices, sweet roasted nuts, slight effervescence and minerals. The retrohale brings added baking spices. The finish captures a mixture of cedar and baking spices. Strength is near medium plus, body is medium. 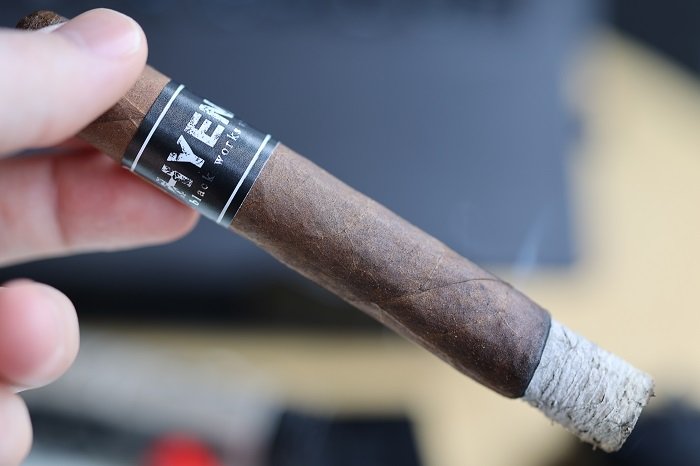 Aaron: As the second third begins, the creaminess and smokiness have dropped out and the mustiness is now attached to the dry oak and the overall profile is fairly dry. The black pepper is in the background and has a long finish. The retrohale is now musty, dry oak. The third finished up with the musty, dry oak with mild black pepper in the background. The strength remained at medium.
Seth: The second third shows a rise in stone fruit notes and they are pairing well with the red pepper and cinnamon spice. I am not getting many floral notes in this third, but I am getting that earth and coffee with some dry wood as well. Like before, full in strength and body.
John: The second third kicked things off with chocolate, mustiness, wood and baking spices that had some sharpness to it moving into the post draw. The dryness is still present on the post draw, but sweetness on the retrohale pushes back. As the second third progressed, citrus returned to the retrohale, and the overall profile is quite similar to the first third.
Jiunn: The second third continues to impress. Still every bit sweet and spicy. Still getting cedar, game, baking spices, sweet roasted nuts and minerals. The only (minor) change is the finish carrying a deeper cedar note along with baking spices. Strength moves up to a consistent medium plus, and the body remains medium. 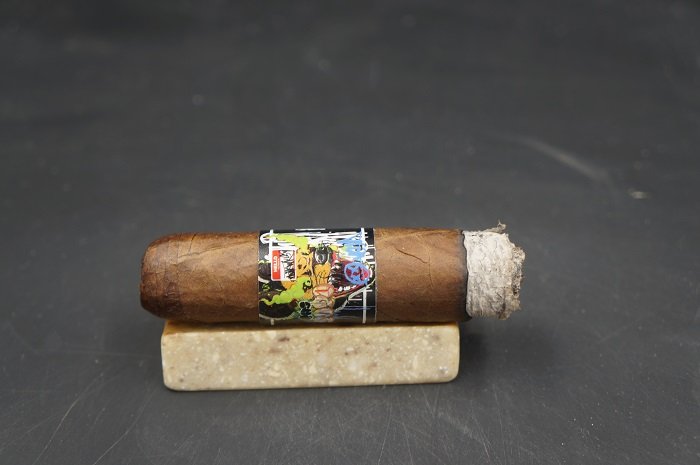 Aaron: The final third is a continuation of the second third. At a half inch in, the oak gains a light toast. The retrohale remains musty, dry oak. At three quarters of an inch in, the black pepper has departed. As the cigar wraps up, the profile is musty and toasted oak. The strength in this third remained at medium.
Seth: The final third delivers a strong spice, tobacco and earth profile. I am getting a lot of pepper notes, and they are pairing with pronounced tobacco notes. It is rather earthy and there is a very long finish to the cigar. Easy full for strength and body.
John: I go into the last third experiencing flavors of dry mustiness. The next few puffs bring earth, mustiness, baking spices, with wood to finish. A few more puffs and some tannins join that wood on the finish. As the cigar settled in, the profile consisted of wood, mustiness and baking spices.
Jiunn: The final third leans towards more baking spices and minerals, but the sweetness in roasted nuts is still kept intact. The finish is starting to show some bite to it, with a rawness in baking spices, but it works and doesn’t irritate my palate. Strength and body finishes medium plus and medium, respectively. 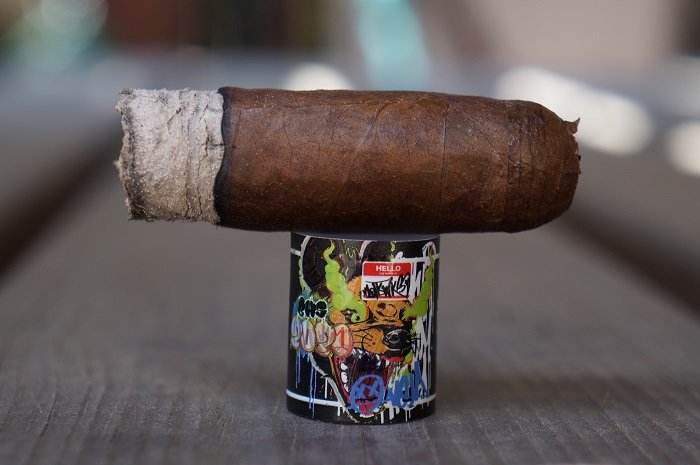 Aaron: The burn was slightly wavy at times, but always kept up with itself. The ash held on in inch and a quarter increments.
Seth: Simply perfect.
John: The burn was consistently straight, with a bright, white ash. I kept knocking the ash off around the 1-1/2 inch mark to avoid wearing it.
Jiunn: Burn performance was nearly flawless. Everything went great aside from some flaky ashes and a quick touch-up to get the burn back on track. 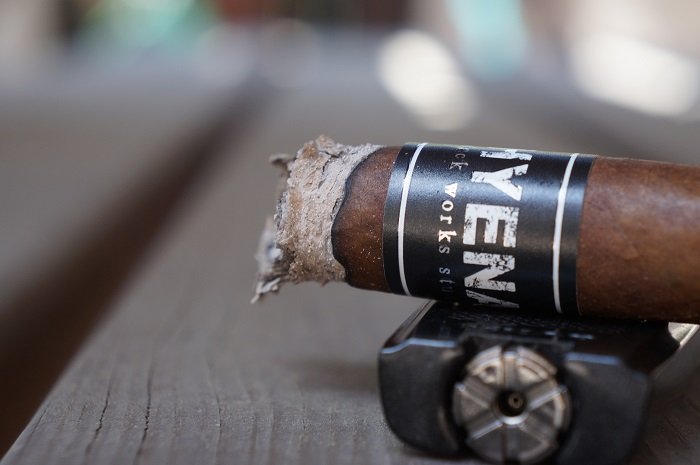 Aaron: The cigar started with a nice combination of flavors, but lost complexity as it reached the second third and was fairly average the rest of the way. Construction was great, allowing me to just focus on the flavors. I would be interested in trying the other vitola in this line to see if it smokes any differently, maybe extending the complexity a bit longer. The overall dryness in the profile just put a damper on the Black Works Studio Hyena Corona Gorda and has me on the fence as to whether I’d come back to it.
Seth: The Black Works Studio Hyena Corona Gorda was an average cigar that was close to amazing. I really do not see middle ground with this cigar. I loved the strength on the cigar, I do not want that gone from the cigar, but I would love for the cigar to deliver some more flavors and complexity. The strong spice notes delivered that strong Cameroon spice flavor, and this is now the strongest Cameroon I have had to date. I liked that the cigar was pressed but would be interested in seeing a larger ring gauge offering. Amazing construction and burn.
John: The Black Works Studio Hyena Corona Gorda is another winner from Black Works Studio. At this point, I would rank Black Works Studio near the top of manufacturers with new releases that I look forward to. Although the dryness on the profile did at times distract me, I was engaged and pleased with the flavors delivered in the first and second thirds. Construction was impeccable. Total smoking time was 1 hour and 25 minutes.
Jiunn: Pigs must be flying. This is two cigar reviews in a row that I actually enjoyed. And on top of that, it’s from Black Works Studio, a brand that I rarely enjoy. The Black Works Studio Hyena Corona Gorda was a different offering from the company. Instead of typically showcasing overt strength and a punchy flavor profile, this cigar showed full flavors and some strength, but in a more composed and balanced way. Hands down will smoke more of these.