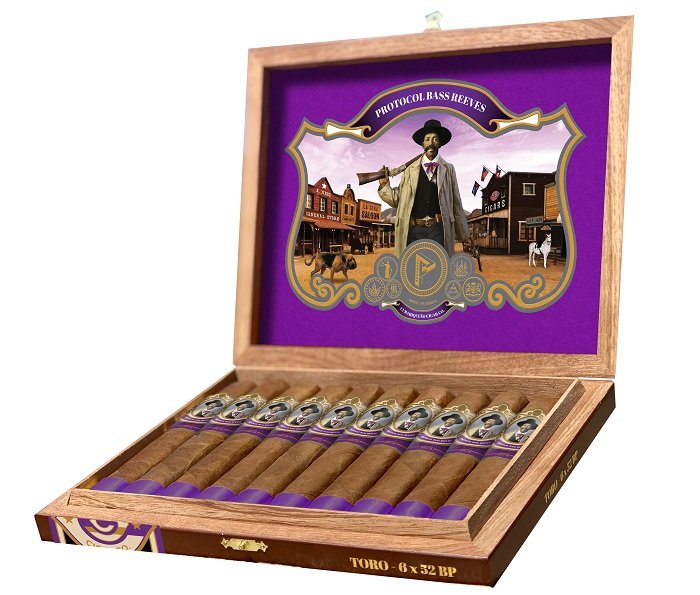 Protocol cigars is proud and honored to announce the third installment in the Lawmen series that will debut at the 2021 PCA Trade Show, The Protocol Bass Reeves. The Protocol Bass Reeves, like the other installments in the Lawmen Series, is being offered in both in natural and maduro. The Lawmen Series is a more classic, traditional, refined, and regal look Protocol Cigars has been offering since it’s launch of the Protocol Sir Robert Peel. The Lawmen Series is the company’s concept where they pay homage to the men and women of law enforcement who spend hours working tirelessly to catch the bad guys.

Bass Reeves was one of the first Black Deputy U.S. Marshals in history. During his long career in Arkansas and the Oklahoma Territory, Bass Reeves arrested more than 3,000 dangerous criminals. In 1875 he was sworn in as a U.S. Deputy Marshal. “Bass Reeves was the inspiration for The Lone Ranger and we tried to incorporate that into the design of the packaging. We added a white horse and incorporated silver into the design on the vista and band because The Lone Ranger’s horse was named silver. We can not think of a more deserving historical law enforcement figure to get a cigar in their honor!” Said Kevin Keithan.

The Protocol Bass Reeves comes in a 6×52 box pressed toro in a 10 count box. It is being produced at the San Lotano Factory in Ocotal, Nicaragua under the watchful eye and tutelage of Erik Espinosa. The MSRP is $119.50 per box. “Bass Reeves was blended with tobacco leaves from the different growing regions of Nicaragua. Both were blended to have incredible taste and balance. The maduro is a dark habano with sweet subtleness. The natural is a nutty sumatra with a delicious underlying spice note.” Added Hector Alfonso Sr. Espinosa’s Master Blender. Juan Cancel added, “We are proud to feature Bass Reeves as the newest addition to the Lawmen Series. I feel it truly shows the diversity of the law enforcement community as a whole, that men and women from all races and ethnicities come together to serve the public at large.”