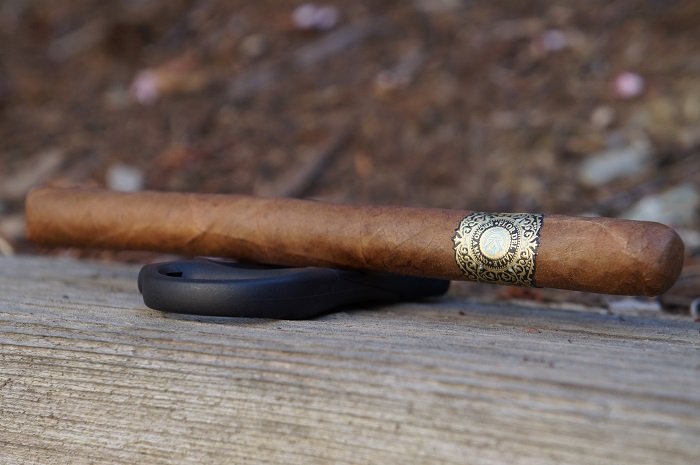 Aaron: The wrapper on the Warped Flor del Valle Sky Flower Lancero is light brown, but is a bit darker towards the head than the foot. There are a network of veins present, some slightly raised as well as some lumpiness from under the wrapper. The seams are smooth and very hard to detect while the head is very well finished. The band appears to be the traditional design for the line. The aroma from the wrapper is quite faint and took a couple of attempts to really find the light mix of wood and earth. The foot brings a lightly sweet cedar note. The pre-light draw brings a lightly musty cedar along with a subtle spiciness on my lips.
Seth: The Warped Flor del Valle Sky Flower Lancero is simple but inviting in appearance. (It is not a Lancero.) The cigar comes with a nicely applied triple cap and the wrapper sports a lovely light Colorado coloring. There are veins present throughout, small to medium in size, and the cigar is silky in texture. The foot of the cigar gives off an aroma of cherry cordials, and the wrapper has some oak, spices and tobacco.
John: The Warped Flor del Valle Sky Flower Lancero is cellophaned and has a brand and QR code sticker. The QR code is an odd choice since I would assume most retailers are only set up for UPC code scanning at best. The wrapper appearance was concerning. There were different colored splotches and mottling randomly across the wrapper, along with visible lumps protruding. I also detected various soft spots where the cigar was underfilled. Not at all what I would find acceptable for a cigar at this price point. Aromas from the cigar included dry cedar, bread, with raisin, hay, and cedar coming from the foot.
Jiunn: The Warped Flor del Valle Sky Flower Lancero isn’t much of a looker given its inconsistent shade of wrapper along with a couple tears. Veins are well pressed, seams tight, bunch and roll even and head well wrapped. Aromas from the wrapper give an abundant wet barnyard. Aromas from the foot tell a blast of white pepper and rich nuttiness. Cold draw reveals minerals and nuts. 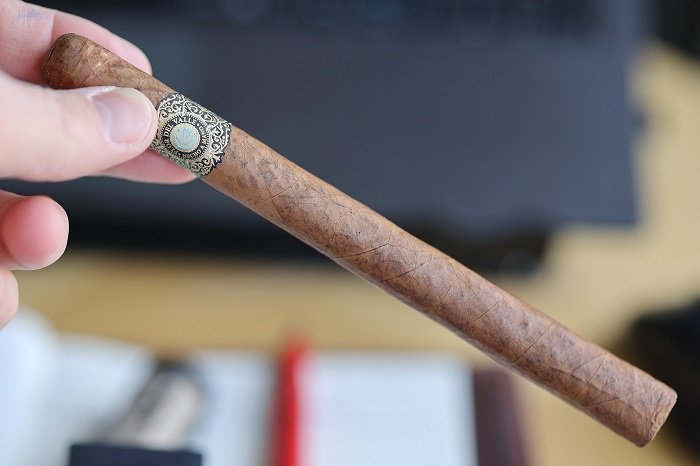 Aaron: The cigar begins with cedar, black pepper and light mustiness. At a half inch in, the mustiness has increased and become even with the cedar while the black pepper is in the background but then has a long and full finish. The retrohale is musty cedar with light black pepper. At an inch and a quarter, the cedar is a bit dry. At an inch and three quarters, the cedar gains a toasted note. The strength in this third was slightly below medium.
Seth: The first third opens with some sharp spice notes. I am getting some pepper qualities, and it has some mineral aspect with that a well. Eventually, there is this earth, cream, coffee and nut quality, and the finish shows more spice and tobacco notes. In terms of strength and body, I would classify the cigar as being medium-full.
John: I was greeted with wood up front, baking spices to finish that lingered well into the post draw. Some fresh wood, baking spices and graham cracker settled into the middle of the profile. As the cigar settled in, bread and baking spices joined the retrohale. Graham cracker joined shortly after, mixing with the cedar on the finish. Roughly an inch into the first third, chocolate joined the retrohale. By the halfway point, fruit sweetness adds complexity to the middle of the profile.
Jiunn: The first third’s flavor mix highlights sharper minerals, red pepper spice and acidic espresso. Retrohaling gives sharper tones of the red pepper spice. The finish presents a long and lingering stale cedar and sharp minerals. Strength is medium-full, body is medium. 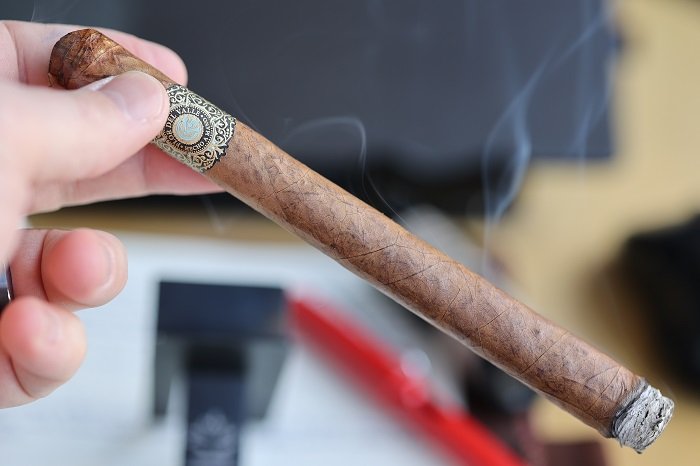 Aaron: As the second third begins, some dry earth joins the profile. At a half inch in, the black pepper remains in the background, but the full and long finish has diminished. At an inch in, the musty and toasted cedar is even with the dry earth while the black pepper remains in the background. The retrohale is now musty and toasted cedar and dry earth. The third finishes with the even mix of musty and toasted wood and dry earth with black pepper in the background. The strength in this third bumped up to medium.
Seth: The second third delivers those sharp spice notes, and I am getting lots of black pepper. There are mineral qualities present as well, and the finish shows touches of floral and tobacco notes. There is this hint of coconut shaving present, but it is subtle. Like before, the cigar is medium-full in strength and body.
John: The second third kicked things off with baking spices at medium strength, and bread underneath. Those baking spices lingered long after each puff. Graham cracker sits on the post draw, with some mild tannin accents. Cedar joins not long after. As the second third settled in, chocolate joined the retrohale to add some sweetness and complexity.
Jiunn: The major change from the first third to second third is the strength level increasing from medium-full to full tilt. It’s doing a number on my dome, creating a near nicotine sickness. In terms of flavors, it’s still a highly mineral and red pepper spice based combination. 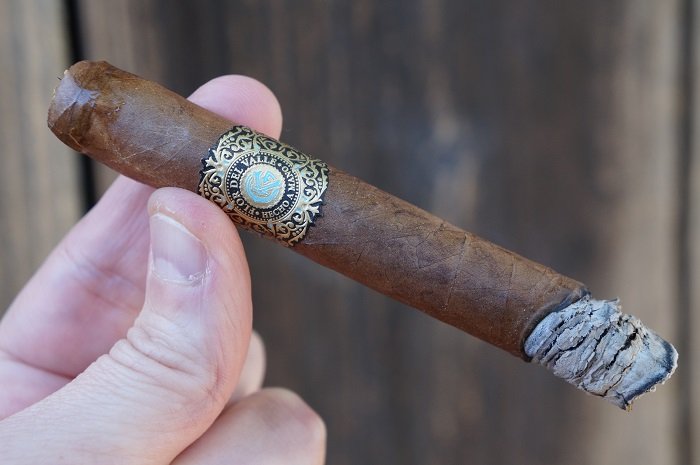 Aaron: The final third is a continuation of how the second ended aside from the black pepper becoming very faint. The retrohale remains musty and toasted cedar and dry earth. At an inch and a quarter, the toasted note transitions to a light char. The cigar wraps up with musty and lightly charred cedar and dry earth with faint black pepper. The strength in this third bumped up to slightly above medium.
Seth: The final third delivered a flavor profile that has that peppery spice quality but was paired with those coconut peel and floral notes from before. It is still sharp and spicy, but nowhere near the level it was in the first and less than the second. There are tobacco notes present as well, and the cigar smokes at a medium to medium-full level for strength and body.
John: Cedar and graham cracker take the review into the last third, with trailing cedar into the post draw. Tannins join the post draw cedar as it settles in, and move up to medium strength.
Jiunn: The final third is still full of head aching strength (body finishing the same medium). The flavor profile shows slight improvement, showcasing a bit more softness in bread. But the overall vibe is still full of sharp minerals and red pepper spice. 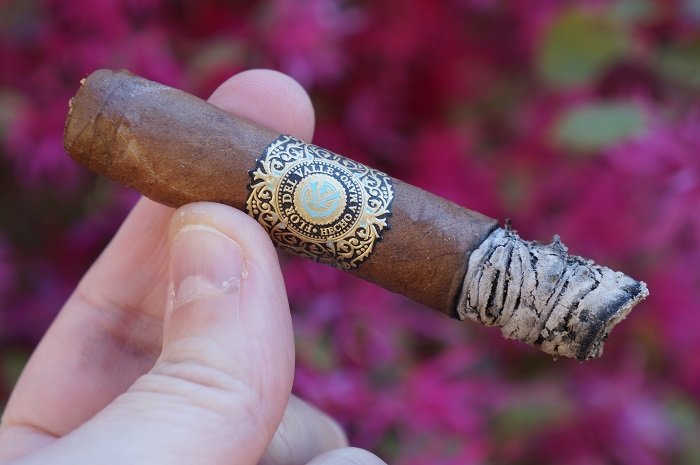 Aaron: The burn was pretty straight throughout, but the big issue was that the cigar went out on me four times, requiring re-lights.
Seth: Good burn from start to finish.
John: The burn was straight through the review experience with the ash holding on up to 2 inches at times.
Jiunn: The burn performance was atrocious. Once it got towards the halfway point, the cigar randomly completely went out three times. Further, the burn line was uneven at all times, requiring a couple quick touch-ups. 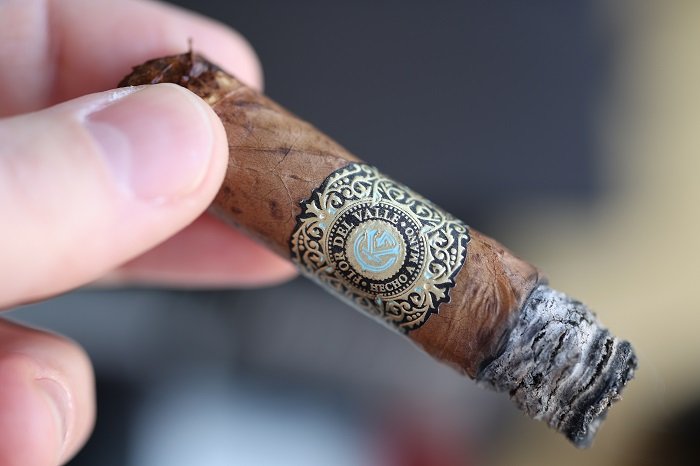 Aaron: The draw was slightly tighter than I prefer, but I don’t think it led to the burn issues.
Seth: Great draw. Perfect level of resistance from beginning to end.
John: I initially rated the draw to be average, as it was 3-1/2 to 4 notches into the resistant spectrum. The draw opened up to 2 to 2-1/2 notches halfway through the first third, giving it a good rating.
Jiunn: The draw was a couple notches below perfect, being tight.

Aaron: The cigar was a bit out of balance in the first third as the black pepper had a long and full finish which masked the cedar and mustiness a fair amount between draws. It settled down in the second third, but was just an average flavor profile. The burn issues were a bit of a letdown and I’m hoping that’s not a trend for the others. The Warped Flor del Valle Sky Flower Lancero carries a hefty price, so I’ll temper my expectations of revisiting until I find out how the burn was for the others to see if it’s worth my time to come back to.
Seth: Besides the fact that this is not a true Lancero, the Warped Flor del Valle Sky Flower Lancero was an okay cigar. It was truly average. While this was an improvement for a lot of recent Warped releases, TABSA releases too, it was still lacking those great qualities that were present in the original and even early Sky Flower releases. I do not know why Kyle went away from the Grand Corona offering, I think it is a better vitola and more appealing to cigar smokers, but that is neither here nor there. Nicely constructed, the cigar presented no problems from start to finish. If those sharp spice notes were not as present throughout, and the flavors were slightly more harmonious, this would have been a good release. Not something I am going to track down or something I would recommend, but hopefully this is a sign of further improvement for Warped and TABSA.
John: Overall, I found the Warped Flor del Valle Sky Flower Lancero to be a good experience, although a noticeable step down from the original Sky Flower release. No doubt some of that could be attributable to the reduction in ring gauge from the original release which constrains the amount of tobacco that can be used in the filler. I would smoke these again, however the price point would probably make me choose the original release or another Warped offering to get a flavor experience that matched. Draw was resistant to start, but opened up. Burn was great throughout the review. Total smoking time was 2 hours and 18 minutes.
Jiunn: This is another example of a once popular and good cigar from Warped, but executed poorly for the newest rendition of the sub-brand. The Warped Flor del Valle Sky Flower Lancero was unbalanced and sharp with minerals, acidic espresso and red pepper spice. For the most part, it entirely missed out on delivering softness and sweetness. Highly disappointing.