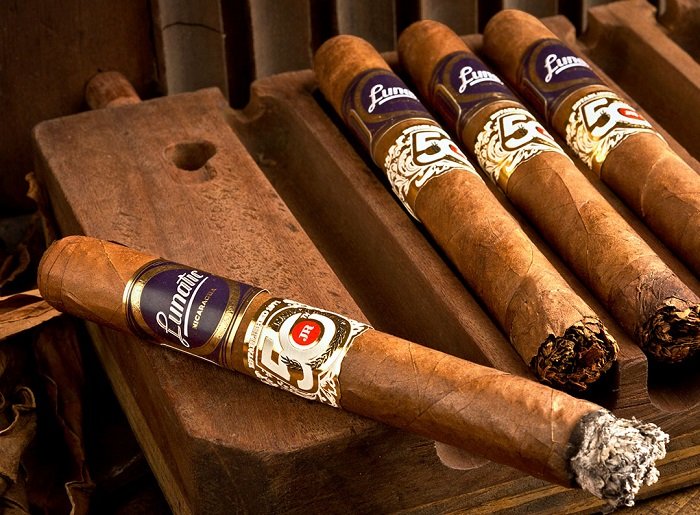 BURLINGTON, N.C. – For the next major release celebrating its 50th Anniversary, JR Cigar is collaborating with legendary manufacturer Aganorsa – the result is a spin on the Aganorsa Lunatic.

Widely known for its intense flavor and bigger ring gauge, this Limited Release Aganorsa Lunatic will be offered in an exclusive, smaller size, the 46 X 6 Toro.

“This is a tremendous celebration for JR Cigar and we are so proud to be a part of it,” says Terence Reilly, vPvof sales and marketing for Aganorsa. “The Lunatic has always been one of our most popular lines and to bring in the smaller vitola is really going to give everyone an amazing smoking experience.”

The Aganorsa Lunatic JR 50th is hand-rolled in Nicaragua at Tabacos Valle de Jalapa S.A., Aganorsa’s main facility. The filler and binder are constructed of the legendary, sweet and smooth Aganorsa tobacco, grown on Aganorsa’s own farms in Nicaragua. The wrapper is a silk smooth Ecuadorian Habano leaf. The cigar also features a fringed foot, exposing portions of the binder and filler on the end.

This blend is well-known to adult smokers who enjoy a Nicaraguan cigar with notes of pepper, leather and tobacco sweetness prominent throughout. What makes this particular release special, however, is the thinner ring gauge. While the traditional Lunatic is known for its larger ring format, this thinner vitola enhances the flavor tremendously while reducing the strength slightly.

Offered in a 10-count box, The Aganorsa Lunatic JR 50th is available in one size: 46 X 6 Toro. Only 250 boxes were made for this project.

Priced at $9 per cigar – $81 per box – this cigar will be released Thursday, April 29th exclusively at www.JRcigars.com.