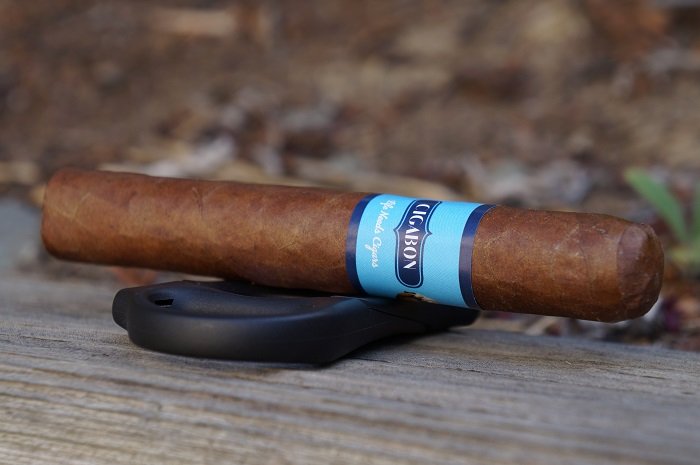 Aaron: The Cigabon has a medium brown wrapper with a network of lightly raised veins and lumpiness from beneath the wrapper. The seams are a bit raised and the caps are a bit sloppily applied. The band is two shades of blue and uses the same logo as Cinnabon. There are also cinnamon rolls on each side of the logo. It’s lazy branding under the guise of clever branding that the craft beer industry is so guilty of. The aroma from the wrapper is the faintest wood note I can imagine detecting. The foot brings breadiness and light spice, which doesn’t quite hit me as cinnamon, but I think does a close enough job to liken itself to the name of the cigar. The pre-light draw brings a mix of wood and soapiness along with a mild spiciness on my lips.
Seth: Finished with a Colorado wrapper, Cigabon is silky in texture with tooth and veins present. It is firm and oily throughout, finished with a simple cap. It has a soft aroma of cedar, hay and pepper.
John: The Cigabon comes cellophaned, with no UPC sticker on the cellophane. Pulling the cigar reveals some residual glue near the band and cap. The cap has a lumpy appearance and is sloppily applied. The cigar band appears fairly simple. Aromas from the cigar included sweet raisin and mild wood. Similar aromas are present from the foot.
Jiunn: The Cigabon has a tanned leather brown with various black marks. The band itself looks pretty cheaply made. Veins are well pressed, seams tight, bunch and roll even and head well wrapped. Aromas from the wrapper give barnyard. Aromas from the foot tell white pepper and hay. Cold draw provides musty grapes and hay. 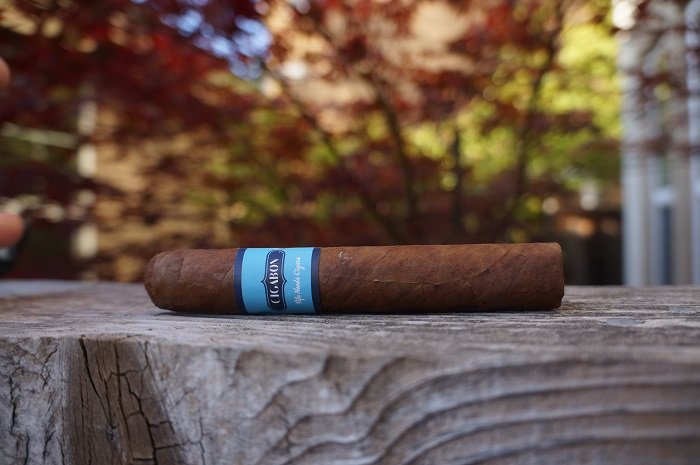 Aaron: The cigar begins with a mix of musty wood and baking spice. At a half inch in, the wood has become more defined as oak and has gained a toasted note while the baking spice is now a bit duller but has a long finish. At three quarters of an inch in, the profile becomes a bit dry. The retrohale is musty, dry oak. As the third comes to a close, the profile is musty and dry oak with a light, dull baking spice in the background. The strength in this third was slightly below medium.
Seth: The first third delivers a flavor profile that is of tobacco, cedar and soft Asian spices. There are some dough qualities with the flavor profile, but they are very subtle. In terms of strength and body, the cigar is just below medium.
John: The first third opened with sweet hay and mild wood with spices to finish. My initial impressions are that it’s quite flat, and the first half inch is really struggling to stay lit. Some mild citrus adds complexity as it settles in, at the 20 minute mark. Mild baking spices develop through the retrohale, and are medium strength through the finish. Nearing the halfway point, light plus chocolate joined, and worked its way up to medium strength.
Jiunn: The first third initially has plenty of bread sweetness and consistency. At a half inch in, a zippy black pepper spice joins the profile. Retrohaling takes away from all the sweet bread, giving mainly a hit of black pepper spice and baking spices. The finish has a mild black pepper and cedar on the rear palate. Strength and body is medium. 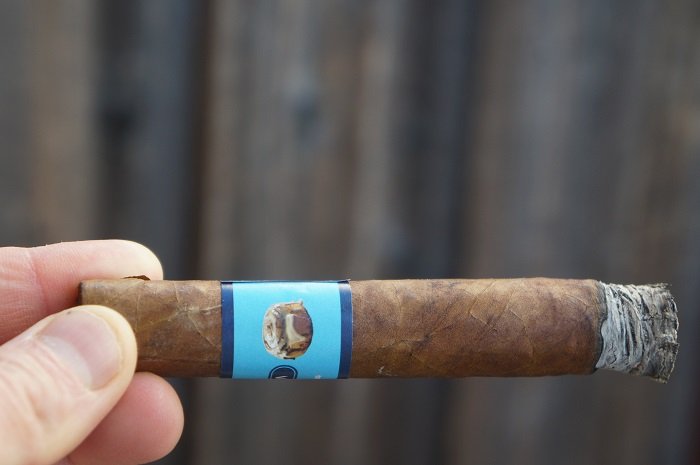 Aaron: The second third continues on with the musty, dry oak, but the baking spice has picked up a bit. At a half inch in, the dull baking spice has morphed into a dull black pepper and maintains its long finish. The retrohale is musty, toasted, dry oak. As the third comes to a close, the musty, toasted, dry oak remains up front as the dull black pepper has become a bit lighter. The strength in this third remained at slightly below medium.
Seth: The second third delivers a flavor profile that is right in line with that of the first third. I am picking up some soft Asian spice notes that are paired with cedar and tobacco. I am getting faint cinnamon notes, and the cigar smokes right around medium in strength and body.
John: Chocolate and baking spices move the cigar into the second third, finishing wood and red pepper flake well into the post draw. Lingering dry cedar defines the post draw as it settles in. Some tannic cedar is present in the bottom half to finish the draw.
Jiunn: The second third deteriorates. The flavors are noticeably less sweet. The profile gains a sour and bitterness reminiscent of citrus rind. Other than that, the black pepper spice and baking spices are still ongoing. Strength and body remains medium. 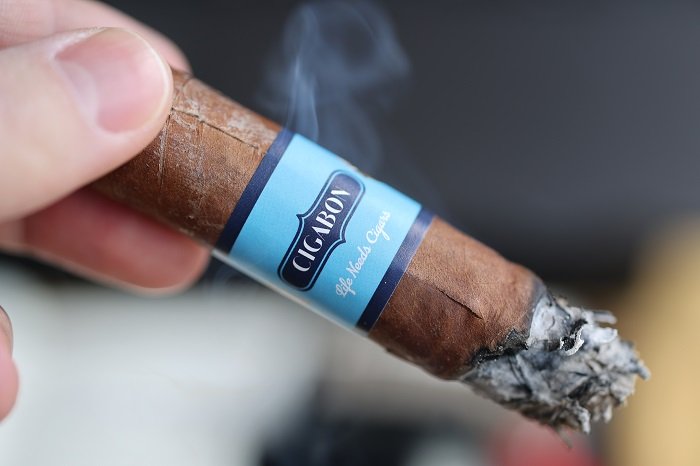 Aaron: As the final third begins, some ashiness joins the profile as the black pepper has departed. The retrohale remains musty, toasted, dry oak. At three quarters of an inch in, the toast transitions to char and there is a light bitterness that joins in. The cigar wraps up with the musty, charred, dry oak with light ashiness and bitterness in the background. The strength in this third bumped up to medium.
Seth: Right in line with that of the second third. Almost identical.
John: Chocolate, wood and a tannic wood finish greeted me in the last third. As the cigar settled, it was primarily wood forward.
Jiunn: The final third is all about the black pepper spice and baking spices. There’s also a hint of char, overshadowing the entire profile. Strength and body finishes the same medium. 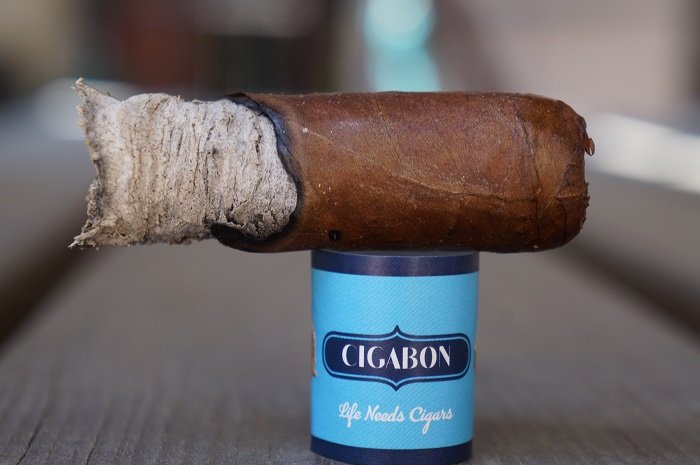 Aaron: The burn was a bit wavy throughout and cigar went out once in the second third and twice in the final third, requiring re-lights.
Seth: Very good burn line.
John: The cigar was offset as it started, and threatened to go out through the first inch or so. Eventually, I touched it up as it was clear a large portion of the wrapper was not combusting. The burn was offset going into the last third, but did not require a touch-up.
Jiunn: Minus a couple quick touch-ups to get the burn back on track, the burn performance was great. Overall solid ashes, cool burning temperature and ample smoke production. 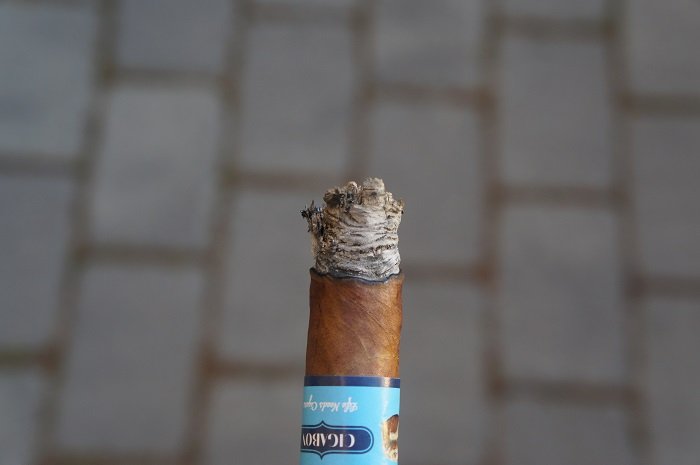 Aaron: The draw was a bit tighter than I prefer, and I’m not sure if it contributed to the cigar going out.
Seth: Very nice draw from beginning to end.
John: The draw had some minor amount of resistance to it, roughly 1-1/2 to 2 notches into the resistant spectrum.
Jiunn: The draw was perfect, giving the ideal air flow.

Aaron: The flavor profile was pretty basic and monotonous. Other than the the pre-light aroma from the foot, there was nothing that reminded me of a cinnamon roll, which is fairly disappointing. The burn issues didn’t help things either. For what I expect the origins of the Cigabon to be, the price point is fairly high and definitely isn’t something I would return to.
Seth: The Cigabon is an average blend with a terrible band and high price tag. The flavors are lacking and there is no depth or transitioning. It is not bad, but the fact that the cigar is priced where it is and these are the flavors delivered make this cigar terrible. Do not waste your time picking up this cigar. If you are thinking about buying this cigar, please reach out to me so I can offer more productive suggestions.
John: Given the amount of fanfare online around the Cigabon, I was curious to see what my experience would be. As is often the case, the cigar could not live up to the hype. While pleasant, the complexity wasn’t particularly engaging, with a presentation that didn’t rise much above a bundle cigar experience. I would likely pass on another Cigabon smoking experience and reach for something more interesting. Total smoking time was 1 hour and 45 minutes.
Jiunn: When you call a cigar Cigabon and image cinnamon buns, you’re making some very suggestive, high claims. Based on the first third, I can actually see it though. I can see how the sweetened bread and black pepper can resemble cinnamon rolls. But given that the following two thirds didn’t match this experience, the naming convention in my opinion fails. Fun to smoke nonetheless.