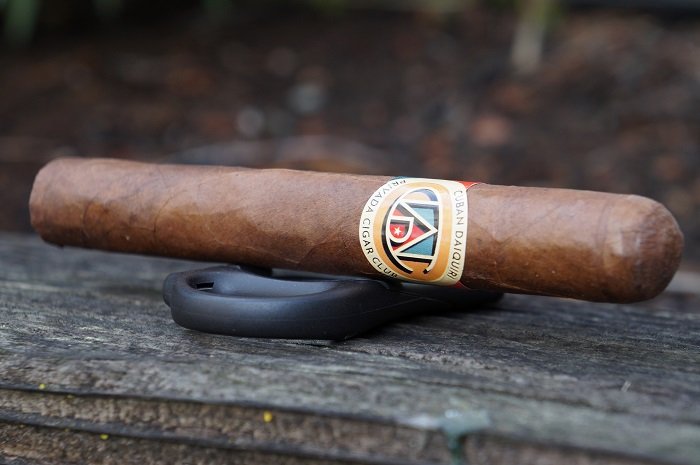 Aaron: The wrapper on the Privada Cuban Daiquiri is medium brown with a network of lightly raised veins. The seams are smooth and the caps well applied. The band is red, orange, green, black and white with the brand and line names on the front and an image of Leonardo DiCaprio as Jay Gatsby raising a glass on the back. The aroma from the wrapper is cedar and a slightly synthetic cherry sweetness. The foot brings more cedar along with tobacco sweetness. The pre-light draw brings cedar and a light vanilla sweetness.
Seth: Simple in appearance, the Privada Cuban Daiquiri has a Natural coloring with small veins throughout. Cigar is smooth in texture, and has a nicely applied cap. Firm throughout, the cigar has an aroma of fruits, spices, leather and dry wood. Sweetness present as well.
John: The Privada Cuban Daiquiri comes in cellophane and does not have a UPC sticker. The cigar has a rainbow colored band with a picture of Leonardo DiCaprio from the movie the Great Gatsby which I’m assuming is a reference to the novels author Fitzgerald popularizing the word daiquiri. For aromas, the wrapper has an almost infused intense sweetness approaching syrup levels. From the foot, a strawberry sweet infused type of aroma, along with tobacco.
Jiunn: The Privada Cuban Daiquiri has a quality wrapper. An oily Colorado with fine traces of tooth. Veins are neatly pressed, seams tight, bunch and roll even and head well wrapped. Aromas from the wrapper tell of rich cedar and nuttiness. Aromas from the foot give the same with added white pepper spice. Cold draws reveal cedar and faint cherries. 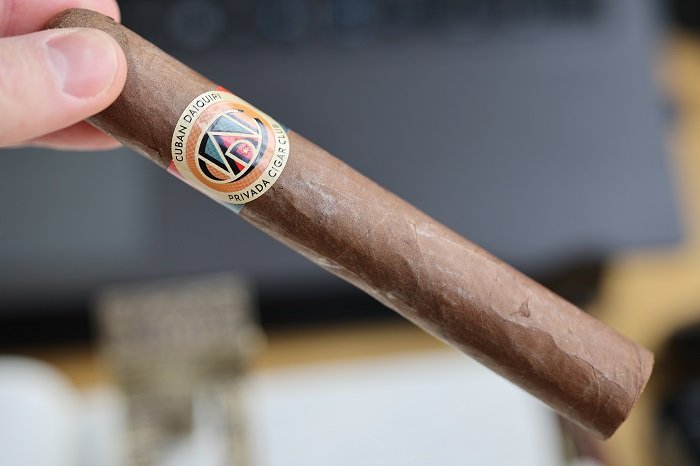 Aaron: The cigar begins with dry, toasted cedar and mild baking spice. At a quarter inch in, a faint creaminess becomes present while the baking spice picks up in fullness. The retrohale is musty, toasted cedar with a baking spice zing. At an inch and a quarter, some dry earth joins the profile. As the third comes to a close, the toasted cedar is just ahead of the dry earth, with baking spice a bit behind and faint creaminess in the background. The strength was right at medium.
Seth: The first third delivers this dry wood and lemon profile that is paired with some sweet spices. There are leather qualities present as well, and it has this sour fruit flavor on the finish. Medium in strength and body.
John: The first third starts with tobacco, sweet wood and black pepper that carries into the post draw. Creamy wood takes up in the retrohale. As it progresses, some of the fruit sweet aroma I was getting from the foot joins in the post draw. Dry wood joins the post draw medley as it proceeds, as hay comes through at the end of the draw. I’m still getting some sort of artificial sweetness at the end of the draw as it progresses. Some mild chocolate is present on the retrohale approaching the halfway point.
Jiunn: The first third shows some good flavors and flavors that tips off the general flow of the profile. There’s some nice black pepper on the tongue, sweet nuttiness, cedar and cherries, but there is also a staleness behind the spice and nuts. Retrohale is highly driven by black pepper and cedar. The staleness is most evident on the finish, being very long and drawn out. Strength is medium-full, and body is medium. 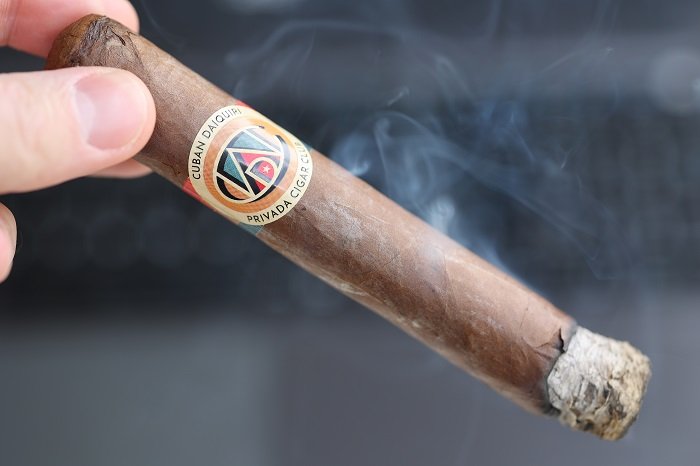 Aaron: As the second third begins, the toast level increases. The retrohale is musty, toasted cedar, dry earth with light baking spice and creaminess. At an inch and a quarter, the toasted cedar and dry earth have become even. As the third comes to a close, the profile is toasted cedar and dry earth even up front with baking spice a bit behind and light creaminess in the background. The strength bumped up to slightly above medium.
Seth: The second third is fairly in line with the first third. I am picking up sour fruit notes with some lemon peel, sweet spices, dry wood and leather. Medium in strength and body.
John: Sweet wood combines with hay to lead off the second third. Some creaminess joins the retrohale as it settles in. Tannins are present on the post draw as it progresses. Some time later, hay joins the post draw as well. In the bottom half, each draw is finishing with a dry wood.
Jiunn: No material changes to note in the second third. It’s still the same black pepper, sweet nuttiness, cedar, cherries, being over casted by staleness. Strength and body remains medium-full and medium, respectively. 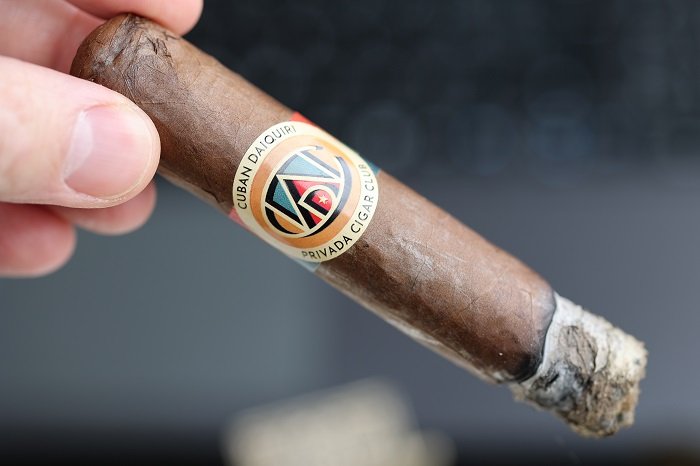 Aaron: As the final third begins, the dry earth takes a slight lead over the toasted cedar. At a half inch in, the baking spice has transitioned to black pepper and picked up in fullness. The retrohale is now an even mix of toasted cedar and dry earth with mild black pepper. At an inch in, the toast level transitions to a light char. As the cigar wraps up, the profile is lightly charred cedar even with the dry earth with black pepper right behind. The strength remained at slightly above medium.
Seth: The final third delivers that flavor profile of fruits and spices, but there is some unpleasantness with that. Mineral and sour qualities. Harsh finish that was medium in strength and body. Bits of pepper and wood as well.
John: Sweet wood again leads off in the last third. Dry wood defines the center of the profile along with the finish. Dry hay joins the post draw as it settles in. The dry wood and hay becomes fatiguing on my palate as the last third continues.
Jiunn: The final third shows a significant increase in sharper cedar, which also diminishes the flavors of sweet nuttiness and cherries. The profile continues to be stale. Strength and body finishes the same at medium-full and medium, respectively. 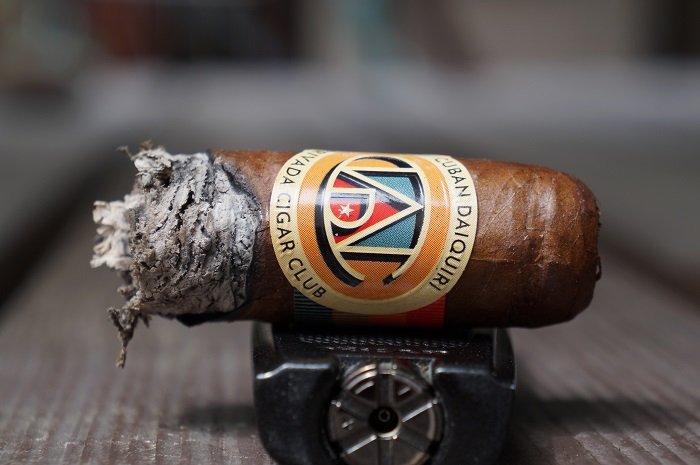 Aaron: The burn line was wavy at times, but never needed any intervention. The ash held on in near two inch increments.
Seth: Burn was good throughout.
John: The burn was straight through the first third. Unfortunately, some wrapper tears off when the band is removed, resulting in the wrapper falling apart around the area.
Jiunn: Aside from quite flowery ashes and a couple touch-ups, the burn caused no issues. Still overall good, given the negatives were not a huge draw from the flavor experience. 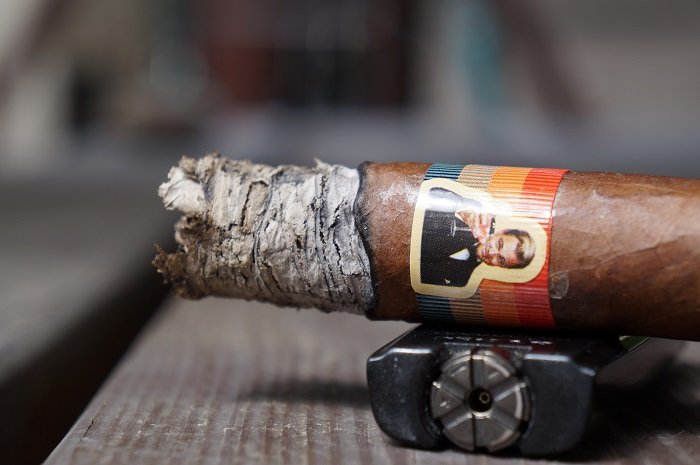 Aaron: The draw was slightly tighter than I prefer, but didn’t cause any issues with the smoking experience.
Seth: Draw was solid.
John: The initial draw was extremely resistant, 4-1/2 to 5 notches, just below the level of plugged. As the cigar progressed, it opened to 3-1/2 to 4 notches halfway into the first third giving it an average rating.
Jiunn: Perfect draw, providing the ideal air flow and resistance.

Aaron: The cigar began with dry, toasted cedar and mild baking spice. A faint creaminess joined in fairly quickly and some dry earth a bit later. The final third saw the baking spice transition to black pepper and the toast transition to a light char. The Privada Cuban Daiquiri had an average flavor profile throughout that was a bit drying on my palate. Not a lot of transitioning, so pretty linear. I don’t see this as a cigar that I would come back to as the flavor profile didn’t provide anything to really keep my attention.
Seth: This Privada Cuban Daiquiri reminds me of a blend I have smoked in the past from Costa Rica. Not the same, or even as good, but it has some qualities that remind me of a past blend I have smoked. Other than that, this cigar really did nothing. Aaron will have to remind me that I smoked it in about two months. If I knew nothing about cigars, and this was the first cigar I ever smoked from Costa Rica, I would make a comment as to why cigars are not made in Costa Rica.
John: The Privada Cuban Daiquiri didn’t seem to offer much in the way of engaging or complex flavors. The first and second thirds were average, with the last third having enough dry wood and hay that it became unpleasant to smoke. The burn was perfect, with a minor issue when the band was removed, but the draw started out almost plugged, eventually opening to an average level. This cigar was a hard pass for me and the resistant draw couldn’t have helped. Total smoking time was 2 hours and 20 minutes.
Jiunn: I’m starting to dislike cigar names suggesting a certain flavor profile almost as much as barrel aged cigars. They have never worked and it’s deceiving. I get that it’s entirely marketing but it never plays out the right way because it never truly tastes like what’s suggested. This Privada Cuban Daiquiri certainly does not taste anything like a daiquiri, let alone a Cuban one. The profile itself has a mixture of flavors that doesn’t work (especially given the stale nature of the cigar). This is a pass for me.