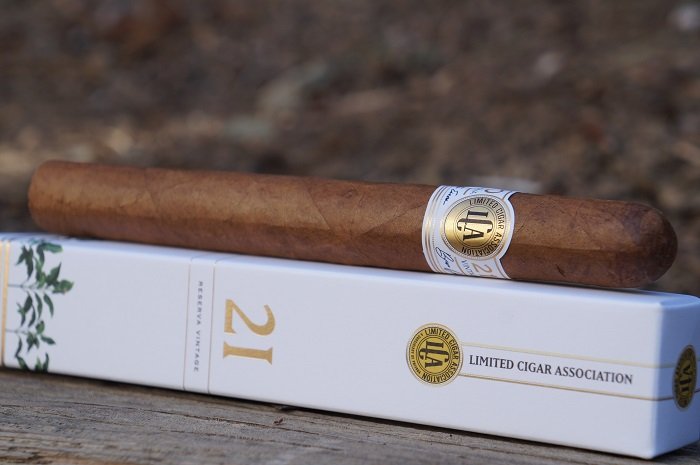 Aaron: The LCA Reserva Vintage 2021 comes in a very nice cardboard coffin. After removing it, the cigar has a light brown wrapper with a network of raised veins. The seams are a bit raised and the caps have some lifting edges while the top cap has a section where the circle wasn’t cut correctly and there is a flap that goes over the cap that is below it. The band is gold and white with the LCA logo, the year of the release and the signatures of the blender and brand owner. The band appears to have been designed for a larger ring gauge as the back of the band that is on top covers part of the components on the left side of the band. The aroma from the wrapper is very subtle hay. The foot aroma is also very light and is a mix of wood and hay. The pre-light draw brings aged cedar.
Seth: Slightly firm in hand, the LCA Reserva Vintage 2021 is finished with a silky wrapper that is Natural in coloring. Few veins present throughout the wrapper, and it has this faded light brown color. Aromas of aged wood, old potpourri and old tobacco. Some earthy notes present as well.
John: The LCA Reserva Vintage 2021 comes in cellophane, and does not have a UPC sticker. My cigar appeared to have minor wrapper damage near the cap. Aromas from the wrapper included a barrel aged wood and hay combination. There was light strength raisin sweetness along with mild wood and hay from the foot.
Jiunn: The LCA Reserva Vintage 2021 doesn’t have the most attractive wrapper. It’s a bit lifeless and dull, with an overall Colorado wrapper color variation. Veins are well pressed, seams tight, bunch and roll even and head well wrapped. Aromas from the wrapper tell of barnyard, apricots and cedar. Aromas from the foot give rich toasted nuts and spicy white pepper. Cold draw reveals soft, toasted nuts and a hint of cedar. 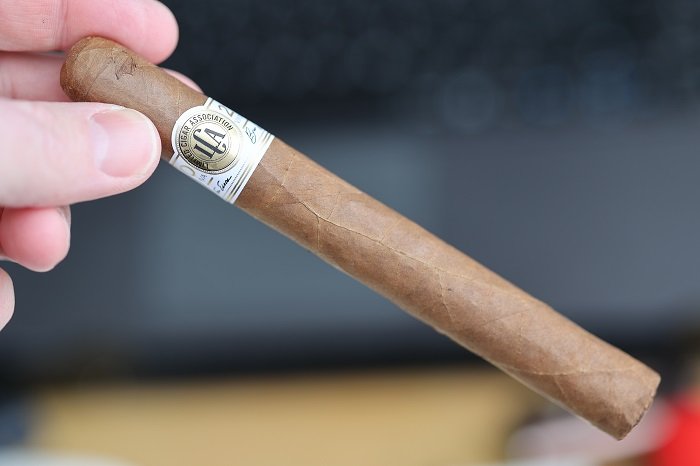 Aaron: The cigar begins with musty, toasted cedar. At a quarter inch in, some black pepper joins the profile. At three quarters of an inch in, the pepper has transitioned to baking spice. The retrohale is musty, toasted cedar and baking spice that brings a mid-level zing. At an inch and a quarter, a faint cocoa powder note joins. As the third wraps up, the profile is musty, toasted cedar up front, baking spice a bit behind and light cocoa powder in the background. The strength was slightly below medium.
Seth: The cigar starts out with a nice creaminess, and it is paired with some white pepper qualities. I am getting bread notes as well, and that is with the cedar and tobacco. There are some nutty qualities with the cigar, and it has a smooth black coffee like finish. I would classify the cigar as medium in strength and body.
John: The first third gets started with sweet baking spices and wood, as cocoa and wood complete the finish into the post draw. A medium lingering wood develops through the post draw as it settles. Cocoa moves to the center of the retrohale as the cigar progresses. The cigar settles into a wood forward profile with baking spices and cocoa offering more complexity.
Jiunn: The profile opens with soft candy cherries, sweet Hawaiian bread and cedar. With roughly an inch in, surprisingly, all the fruit and candy-like aspects are gone, leaving me with a combination of Hawaiian bread and cedar. Strength and body is medium. 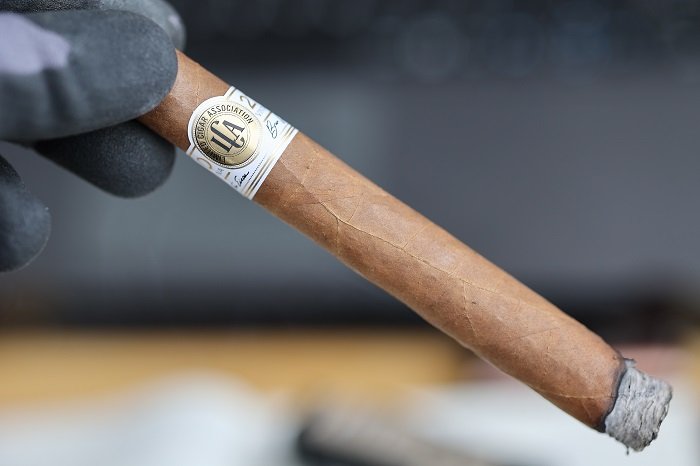 Aaron: As the second third begins, light amounts of wood bitterness and creaminess have joined in. At a half inch in, the baking spice has mellowed a bit. The retrohale is musty, toasted cedar with light amounts of baking spice and creaminess. At an inch and a half in, the toast level and wood bitterness both pickup a bit. As the third wraps up, the profile is musty, toasted cedar with wood bitterness, baking spice and creaminess in the background. The strength bumped up to medium.
Seth: The second third delivers a flavor profile of bread, cream, tobacco, cedar, hay and white pepper spices. I am picking up some celery notes as well, and the finish is that of salted wood and coffee. Medium in strength and body.
John: Dry wood greets me at the front of the draw. Some muted cocoa is present in the middle of the profile as lingering wood defines the post draw. As it progresses, mild dryness and tannins join the post draw.
Jiunn: The second third’s flavor profile is more vague. The sweetness is less identifiable as Hawaiian sweet bread. Instead, it’s more of a generic yeasty note with a little sweetness. The cedar however is still a main driver. Strength and body continues to be medium. 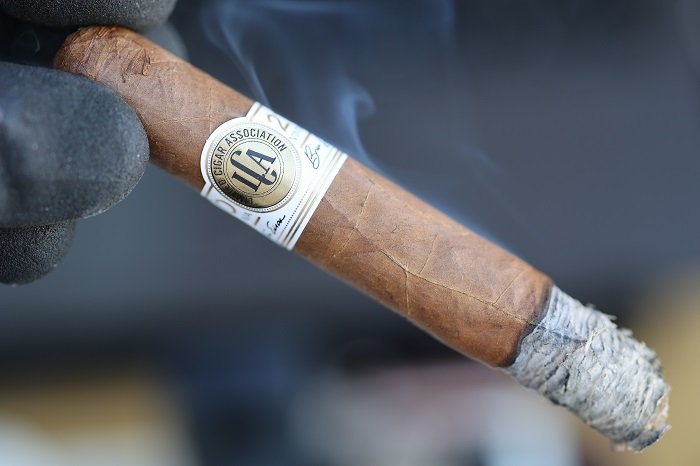 Aaron: As the final third begins, the wood bitterness is right behind the musty, toasted cedar. At a half inch in, the creaminess has departed and the wood bitterness and baking spice are very mellow. The retrohale is now musty, toasted cedar with light bitterness. At an inch in, a vegetal note joins the profile and the bitterness picks back up. As the cigar wraps up, the vegetal and wood bitterness is right behind the musty, toasted cedar with some baking spice remaining in the background. The strength remained at medium.
Seth: The final third was right in line with the first and second third. I was picking up lovely cream, hay, tobacco and bread notes. There was some white pepper present, but it was not at the level that it was in the first two thirds. Like before, there are coffee notes on the finish. Medium in strength and body.
John: Mild cocoa and wood lead the cigar into the last third. Lingering, dry wood is still present on the post draw. As it progresses, tannins join the post draw as the wood builds to medium strength. Some time later, hay joins the middle of the profile, as mild cocoa tries to break through. At some point before the middle third the hay also joins the post draw.
Jiunn: The final third is the same as the second third. Still a generic yeasty sweetness with plenty of cedar to match. Strength is a tad stronger but I would still tag it as medium. Body is unchanged at medium as well. 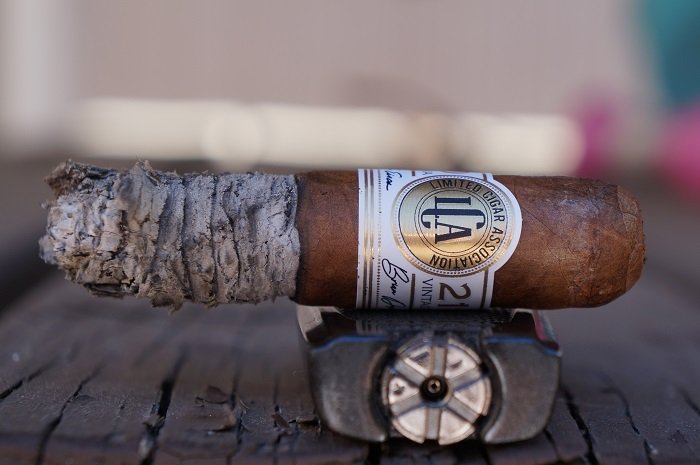 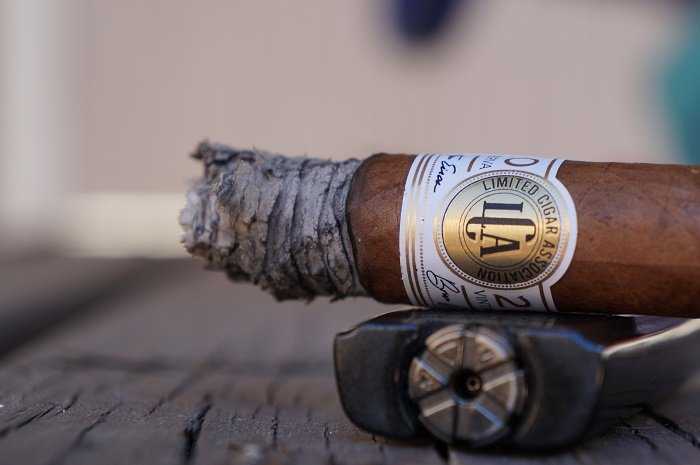 Aaron: The cigar began with musty, toasted cedar. Some black pepper joined in fairly quickly and then morphed to baking spice. Some faint cocoa powder joined a bit later. The second third saw some wood bitterness and creaminess join in. The bitterness built up a bit later. The final third saw a vegetal note join and the bitterness increase some more. Construction was absolutely perfect. The LCA Reserva Vintage 2021 had a nice start with a good combination of flavors and low strength. The second third walked the line of good/average but finished average due to the bitterness and maintained that level the rest of the way. If the cigar could have just dodged the wood bitterness, it could have been good throughout. Not sure if some time might help to alleviate that. The price isn’t bad for something dubbed as a limited. Overall, the performance has me right on the fence of if I’d come back to this, but I would guess it would be hard to track down any more of these anyway.
Seth: This is a cigar, that with a few tweaks, could potentially be very good in all categories. A little more depth and I probably would have loved this LCA Reserva Vintage 2021. Instead, the cigar seemed too light and lacking some pronounced flavors. That’s saying something if I’m saying it! It’s like they blended the cigar on eggshells. Too light and gentle throughout. Medium in strength and body with great construction. Really disappointing.
John: The LCA Reserva Vintage 2021 started out compelling in the first third, combining sweet baking spices, wood and cocoa. Through the second and last thirds the profile was largely wood forward, losing the complexity from the first third. The construction and burn were perfect. If the first third had been more represented through the second third then I would see myself returning to it, but as it stands the profile was fairly generic with a premium price tag. There are numerous other offerings from CLE I would happily reach for. Total smoking time was 1 hour and 58 minutes.
Jiunn: So far in 2022 reviews, if I smoked just the first third of the cigar, it would be a banner year. The LCA Reserva Vintage 2021 beginning was blissful, giving me awesome soft candy cherries, sweet Hawaiian bread and cedar. But past that, it was pretty disappointing, settling down to a lot of vagueness and an average passable experience. This is a no for me.