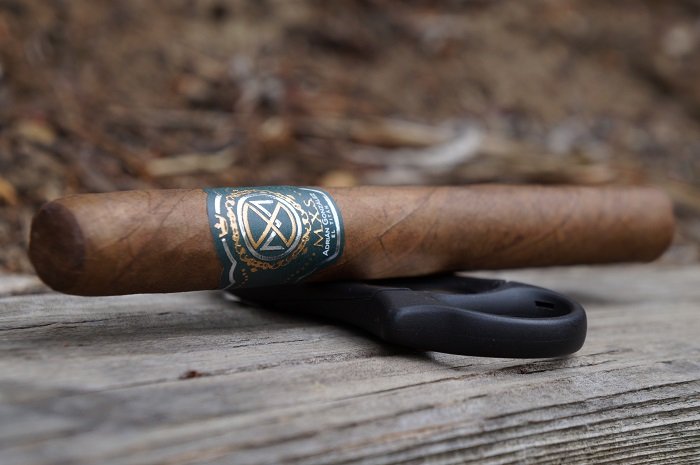 Aaron: The wrapper on the A.C.E. Prime M.X.S. Signature Adrián González El Titán is a marbled medium brown and has a network of well pressed veins. The seams are very smooth and the head is finished off with a well applied set of caps. The band is Hunter Green along with some gold and silver. It denotes the line name and has Adrian’s signature on the side. The aroma from the wrapper is a mellow fire cured note while the foot brings a sweet and smoky wood. The pre-light draw brings and aged cedar with very light mustiness. There is also a mild spiciness on my lips.
Seth: With a faded dark marbled wrapper, the A.C.E. Prime M.X.S. Signature Adrián González El Titán sports Colorado and light Maduro qualities. Veins are noticeable, medium in size and the wrapper has a finely shaved wood texture. The cigar is firm throughout and I am picking up sharp peppery spice qualities on the wrapper and foot.
John: The A.C.E. Prime M.X.S. Signature Adrián González El Titán is cellophaned, with a space designed to leave a tearpoint for the UPC code. The cigar has a single band, and a wrapper that is chocolate brown in color, and with firmly pressed veins. Aromas from the cigar included aged wood, chocolate, stewed fruit and a general mustiness. From the foot, an intense citrus, approaching tropical fruit, along with hay accents.
Jiunn: The A.C.E. Prime M.X.S. Signature Adrián González El Titán has a rather dull wrapper shade with the consistency of fine sandpaper. Veins are well pressed, seams tight, bunch and roll even and head well wrapped. Aromas from the wrapper give white pepper and plums. Aromas from the foot tell dried nuts. Cold draw gives a hint of white pepper and slight metallic tones. 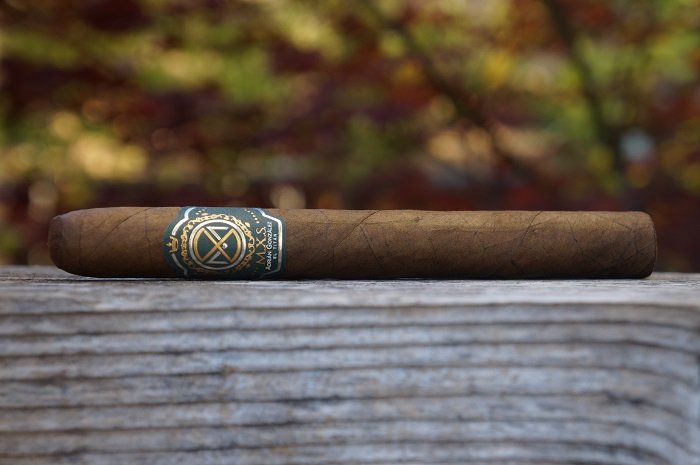 Aaron: The cigar begins with lightly musty oak, earth and mild black pepper. At a half inch in, the mustiness and black pepper have both increased a bit. The retrohale is a mix of musty oak and earth. At an inch and a quarter, the earth has a very long finish. At an inch and three quarters, the musty oak and earth are even, while the black pepper is light in the background. The strength in this third was slightly below medium.
Seth: The first third opens with sweet spice, cedar and plum notes. There are some tobacco and earth qualities present as well, and the finish shows some earth and pepper. It is smoking around a medium-full level, and that is for strength and body.
John: My first few puffs brought citrus, musty wood, sweetness, with a finish of baking spices and wood. The baking spices had a medium length finish through the post draw. As the cigar progressed, wood pushes into the post draw as well. As it settles in, roughly the 10 minute mark, chocolate comes through the retrohale. In the bottom half, fresh wood was the primary flavor driver.
Jiunn: The first third is a pepper bomb, especially through the nasal passages. Outside of the white pepper, there’s cedar and hay. The finish has the white pepper sitting on my entire tongue, but not in an uncomfortable manner. Strength is medium plus, body is medium. 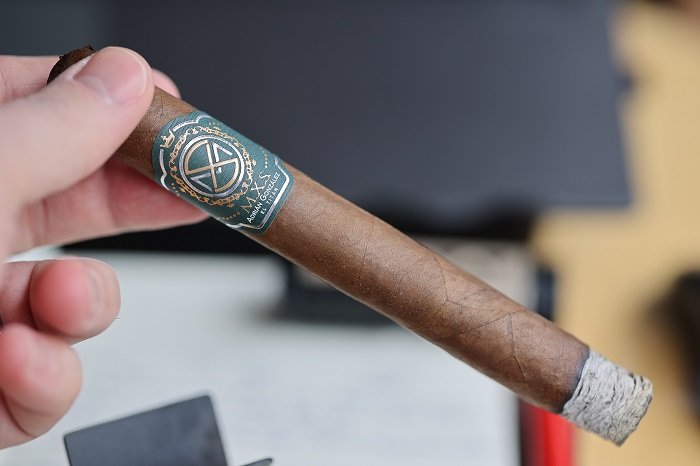 Aaron: As the second third begins, the black pepper has picked up and is just behind the musty oak and earth. At a half inch in, the earth now has a slight lead in the profile and a decent toast level has joined in which goes across both the earth and oak. The retrohale is musty and toasted oak just ahead of the earth. As the third comes to a close, the toasted earth has a slightly larger lead over the toasted and musty oak while the black pepper is right behind and has a long finish. The strength in this third bumped up to medium.
Seth: The second third delivers a flavor profile that is softer than before, and I am getting tobacco and cedar notes. There are still some plum qualities, spice as well, but no pepper. I would classify the cigar as smoking just between medium and medium-full.
John: Wood opens the second third, mild citrus in the middle and a finish of musty wood and baking spices. Mild chocolate comes through the retrohale as it settles in. Approaching the halfway point, the profile settles into a wood and citrus combination.
Jiunn: The second third’s pepper dies down considerably. As a result, the cedar and hay notes blend better. But on the retrohale, the pepper is still overwhelming such that it’s honestly difficult to perform a full retrohale. Strength and body is still medium plus and medium, respectively. 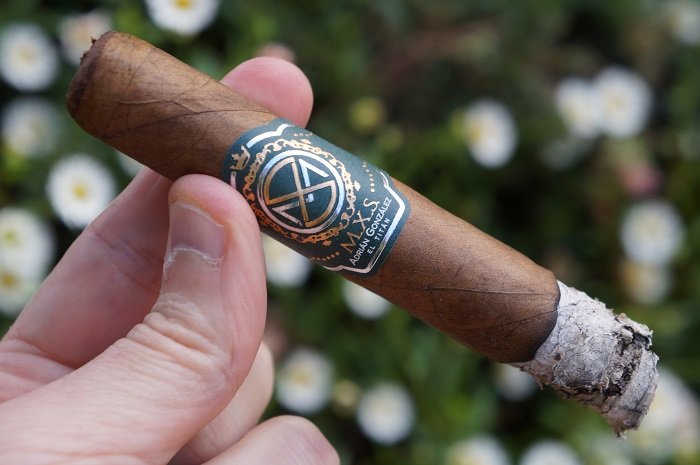 Aaron: As the final third begins, the heavy toast transitions to a light char across both the earth and oak. At a half inch in, some bitterness joins the profile. The retrohale is an equal mix of toasted oak and earth. At an inch and a quarter, the black pepper has departed. The cigar wrapped up with charred earth up front and musty and charred oak a bit behind, The strength in this third bumped up to slightly above medium.
Seth: The final third goes downhill quickly. Lots of rough earth and pepper notes. There are some charcoal qualities present as well, and the finish is of leather. In terms of strength and body, I would classify the cigar as medium-full.
John: Mildly tannic cedar moves the cigar into the last third. The finish was sweet, with musty wood that carried into the post draw. Some mildly toasted wood joins as it settled in. Earth moved into the center of the profile as it progressed.
Jiunn: The final third is the same as the second third. An overall staleness to the flavors of white pepper, cedar and hay. Strength and body is unchanged at medium-full and medium. 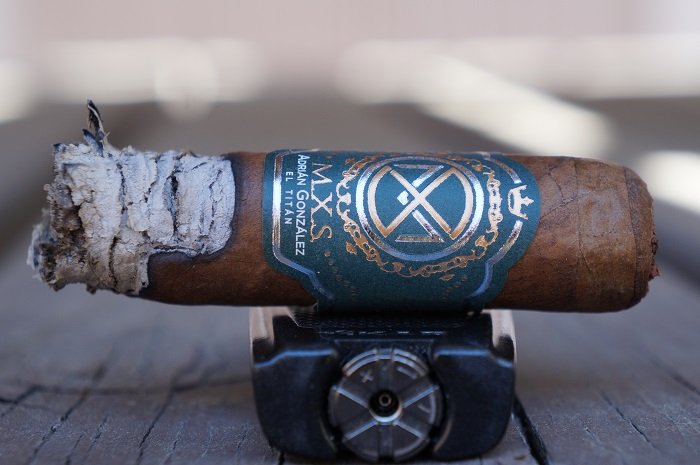 Aaron: The burn was a bit wavy throughout, but did go out twice, requiring re-lights.
Seth: Nice burn from beginning to end.
John: The burn was straight, with a bright white ash. Burn was offset slightly in the second third, self correcting. The cigar struggled to stay lit in the last third, possibly because of the tight draw.
Jiunn: Burn performance was spot on. Even burn, tight ashes, cool burning temperature and ample smoke production. 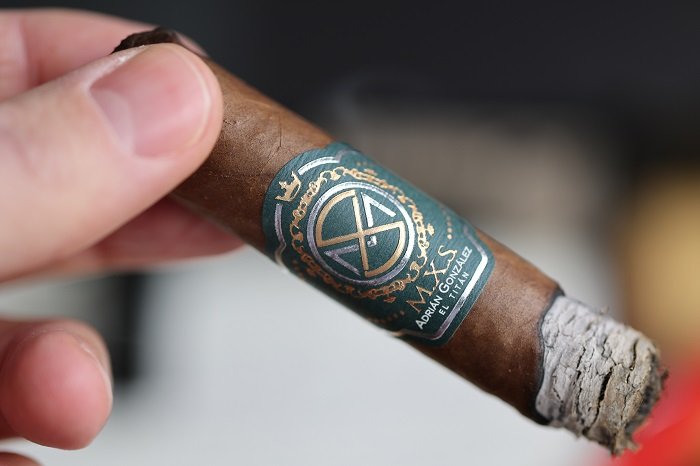 Aaron: The draw was slightly tighter than I prefer, but didn’t cause any issues with the smoking experience.
Seth: Very good draw throughout.
John: The draw initially started out as a poor rating, tight to the point of almost being plugged. As the cigar progressed into the first third, it opened up to 4 to 4-1/2 notches resistant, resulting in a subpar rating.
Jiunn: The draw was also spot on, providing the ideal air flow.