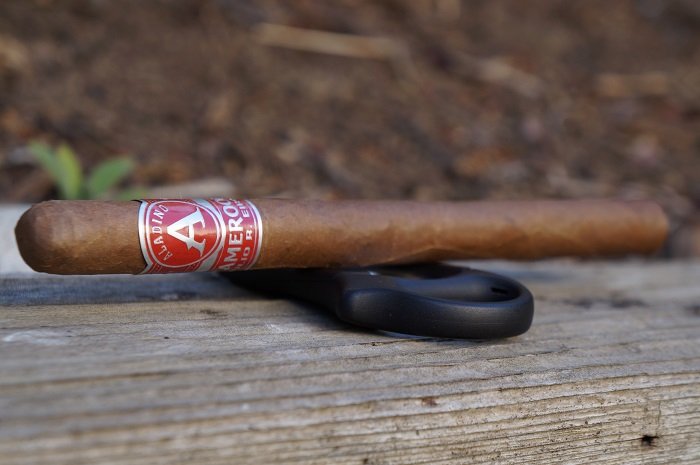 Aaron: The wrapper on the JRE Aladino Cameroon Elegante is light brown and has some raised veins present as well as some from below that are showing through. The seams are smooth and the head is very well finished. The band is the traditional design for the line in the brick red and silver color combination which denotes the brand and line. The aroma from the wrapper is a mix of dry hay and earth while the foot just brings a light cedar. The pre-light draw is musty cedar along with a mild spiciness on my lips.
Seth: Firm throughout, the JRE Aladino Cameroon Elegante is well constructed. The wrapper has this faded brown coloring, and it has a faint silky texture. Solid Natural coloring. There are few veins present throughout and I am picking up aromas of cedar, leather and hay. The foot is giving off similar cedar and hay qualities, but I am getting some earth as well.
John: The JRE Aladino Cameroon Elegante comes cellophaned, and has a large single band. A UPC sticker keeps the cellophane closed, and has a tear point integrated, which unfortunately was set too high and ripped in half opening the cello. Aromas from the cigar included a combination of musty tobacco sweetness. From the foot, there was sweet raisin and tobacco.
Jiunn: The JRE Aladino Cameroon Elegante has a light caramel Colorado Claro wrapper shade. Veins are for the most part well pressed, seams tight, bunch and roll even but on the loose end and head well wrapped. Aromas from the wrapper give high levels of barnyard stank and hay. Aromas from the foot tell white pepper and cedar. Cold draw gives muted hay. 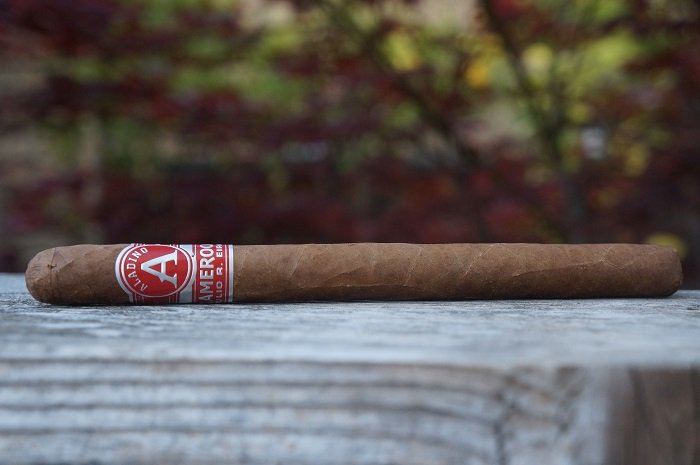 Aaron: The cigar begins with a musty and toasted general wood note along with black pepper. At an inch in, the wood becomes more defined as cedar. The retrohale is very similar but has a delayed black pepper. At an inch and a quarter, the musty and toasted cedar has become pretty detailed as the black pepper has mellowed a bit. As the third comes to a close, a slight creaminess joins the profile of musty and toasted cedar and mild black pepper. The strength in this third slightly below medium.
Seth: The first third opens with some peppery spice notes and burnt marshmallows. There are some dark roasted coffee bean qualities present as well, and the finish is that of cedar and lemon peel. In terms of strength and body, the cigar is smoking around a medium-full level.
John: The first third kicks things off with sweet biscuit and musty wood. Dry wood takes up home in the post draw. As the first third settles in, cocoa comes through on the retrohale, roughly 15 minutes in. As the cigar progressed, wood took up the center of the profile at medium strength.
Jiunn: The first third gives a surprising peppery experience. I typically don’t find lanceros this peppery at all. The white pepper meshes well with a roasted nuttiness and pencil lead minerality (sounds weird but it tastes good). Retrohaling is the best part, as it gives big notes of white pepper and sweet nuttiness. The finish is quite lengthy with a white pepper and cedar mixture. Strength is medium-full and body medium. 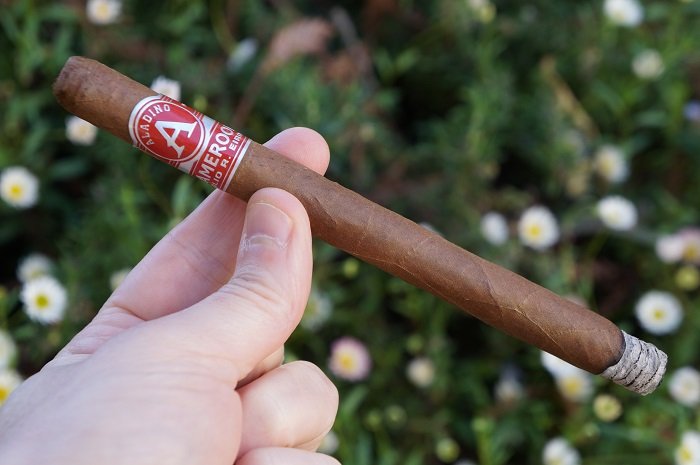 Aaron: As the second third begins, the creaminess has faded away. At an inch in, the toast level of the cedar picks up a fair amount. The retrohale is musty and toasted cedar with mild black pepper. As the third comes to a close, the toasted cedar is up front as the mustiness is now a bit behind and the black pepper light in the background. The strength in this third bumped up to be right at medium.
Seth: The second third delivers those same qualities from the first third and I am picking up some coffee bean, cedar, peppery spice and citrus notes. It is still smoking at that level of medium-full, and it has a long finish. The marshmallow note has faded though, and that takes away some complexity.
John: Sweet, musty wood takes the profile into the second third. Mildly sharp tannic wood finishes each draw. As the first third settles, cocoa begins to finish each draw. Halfway through the second third, musty wood takes up the center of the profile, along with sweet wood to finish the draw.
Jiunn: The second third’s profile becomes sharper. Both the white pepper and pencil lead minerality increases, while the softness of the sweet nuttiness dissipates. This sharpness is especially prevalent on the finish, making it still lengthy but not in the best way. Strength and body remain medium-full and medium, respectively. 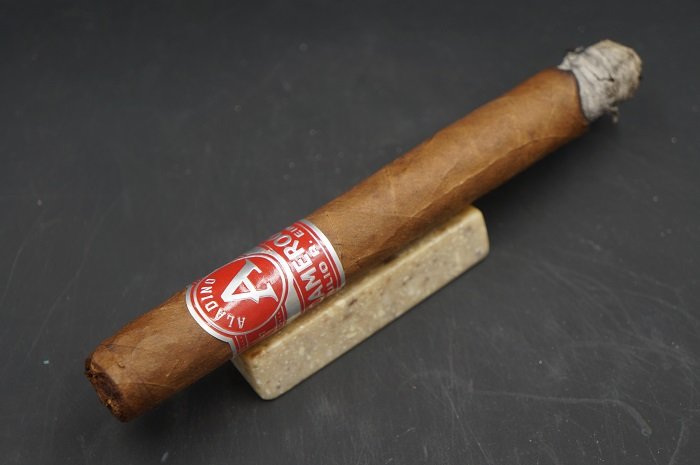 Aaron: As the final third begins, the cedar now has a heavy toast. The retrohale remains musty and toasted cedar with mild black pepper. At an inch in, the toast note has transitioned to a light char. The cigar wraps up with lightly charred cedar, with mustiness right behind and light amounts of black pepper and a metallic note in the background. The strength in this third remained at medium.
Seth: The final third delivers a profile of cedar, hay and lemon peel. There are some faded earth notes, but the peppery spice has faded, and it has become a little flat. There are subtle coffee bean notes, but they are quite faint. In terms of strength and body, I would classify the cigar as being between medium and medium-full.
John: Initial puffs in the last third consist of wood, along with sweet accents, finishing with dry wood. Light plus baking spices come through as it progressed. By the bottom half, sweet wood is driving the profile.
Jiunn: The final third stays pretty true to the second third. The only change is a gaminess/meatiness to the profile. But it’s still pretty much the same white pepper and pencil lead minerality. Strength and body is unchanged at medium plus and medium. 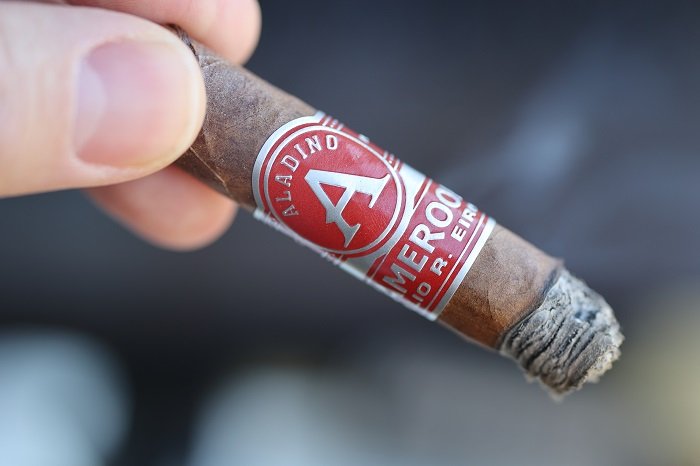 Aaron: The burn was straight throughout. Interestingly though, twice when the ash dropped, the cigar immediately went out and required re-lights.
Seth: Perfect burn from beginning to end.
John: The burn was fairly picture perfect through the entire review. I consistently tapped the ash off as it reached the one inch mark to avoid wearing it.
Jiunn: Burn performance was almost perfect. A couple touch-ups were required. Aside from that, smooth sailing. 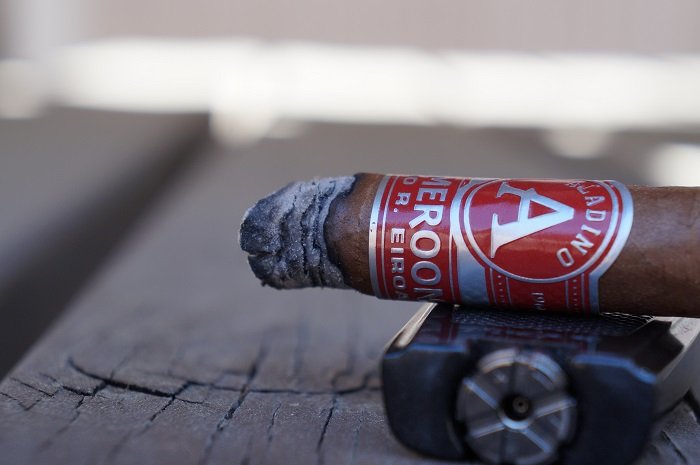 Aaron: This Lancero smoked pretty similarly to the Lonsdale. A nice flavor profile through the first two thirds with a bit of a drop in the final third as the toast transitioned to char. The odd issue of the cigar going out when the ash dropped is really the only things that makes this cigar fall slightly lower than the Lancero. Overall, the JRE Aladino Cameroon Elegante is another good offering for the company and for fans of Lanceros, another one they should put on their must try list. I would gladly return to this cigar and the price point is quite attractive for the vitola and the smoking experience. Track some of these down.
Seth: Looking back on the JRE Aladino Cameroon Elegante, I believe the 38 ring gauge was a bridge too far. The flavors never popped and I felt the wrapper was too weak for the blend. The wrapper can be fun and unique, but it needs the right proportion of filler tobacco.
John: The JRE Aladino Cameroon Elegante was a good cigar throughout, with perfect burn and construction. The natural comparison will be with the Lonsdale release last year, and while the Elegante was enjoyable, it did lack the layers of complexity that the Lonsdale release delivered. I would smoke the Aladino Cameroon Elegante again. Total smoking time was 2 hours on the nose.
Jiunn: Providing a full flavor first third and lacking subsequent two thirds, this was an overall average experience. The first third was bold in flavors with powerful white pepper meshing well with roasted nuttiness and pencil lead minerality. But past that point, the sweetness and nuttiness was lost, which tipped the scale to being too peppery and mineral driven. I’d give the JRE Aladino Cameroon Elegante a few more tries in the hopes of finding consistency.