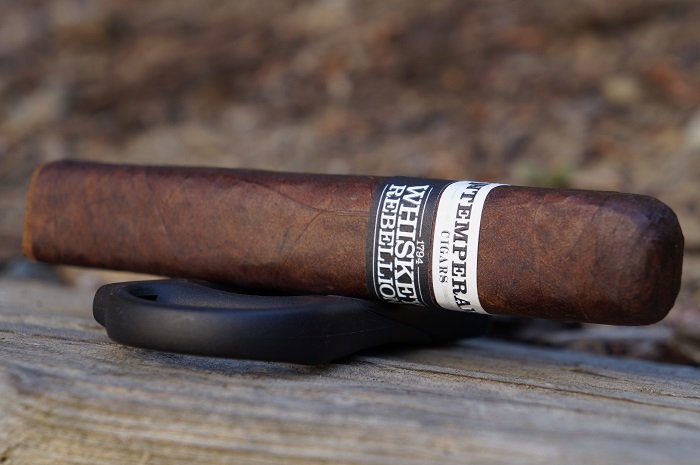 Aaron: The wrapper on this box pressed offering is between medium and dark brown and has a bit of marbling to it. The RoMa Craft Intemperance Whiskey Rebellion 1794 Tarred & Feathered has a network of fine veins present and the wrapper stops short of the foot about an eighth of an inch, exposing the binder. The seams are quite smooth, and the caps are applied very well. There are two bands, with the primary being black on white and denoting the brand and the secondary being white on black and denoting the line. The aroma from the wrapper is a light mix of wood and earth, while the foot brings some grape sweetness and black pepper. The pre-light draw is creamy leather and wood with a decent level of spice on my lips.
Seth: Finished with a lovely press, the RoMa Craft Intemperance Whiskey Rebellion 1794 Tarred & Feathered sports a dark Colorado wrapper that has a marbled coloring. There are some veins present throughout and they are medium in size. Like other releases it has a slightly unfinished foot. As Tyga would say, “taste, taste.” The wrapper is coarse in texture and I am picking up aromas of manure, coffee grinds, spices and leather. The foot is giving off sharp pepper, rich earth and currant notes.
John: The RoMa Craft Intemperance Whiskey Rebellion 1794 Tarred & Feathered, besides having one of the longest cigar name introductions yet, is box pressed, presented in cellophane, double banded and does not have a UPC sticker on the cellophane. Additionally, one of the interesting complications RoMa Craft adds to some of their cigars, is they’ve left roughly 1/8″ of the foot exposed so you can taste the cigar flavor profile prior to the wrapper burning. For aromas, I was able to pick up from the wrapper a light barnyard, and aged wood. From the foot, tobacco, wood and earth.
Jiunn: The RoMa Craft Intemperance Whiskey Rebellion 1794 Tarred & Feathered has a rustic and hearty habano wrapper. Veins are roughly pressed, seams tight, bunch and roll even and head well wrapped. Aromas from the wrapper give cedar and minerals. Aromas from the foot tell the same as the wrapper, with added white pepper. Cold draw reveals chocolate and cedar shavings. 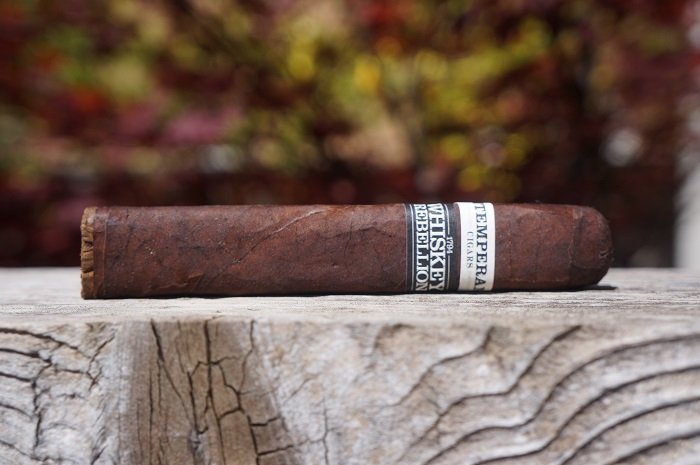 Aaron: The cigar begins with a mix of wood, black pepper and a bit of mustiness. At a half inch in, the black pepper mellows a bit. The retrohale has wood up front and light earth in the background. At an inch in, the pepper picks back up and now has a slight lead over the wood as the earth remains in the background. As the third wraps up, the black pepper is slightly ahead of the wood and mustiness which are even while the earth is in the background. The strength in this third was medium-full.
Seth: The cigar starts out with a lot of cayenne and paprika notes. I am picking up some dry earth and leather qualities, and there is a meaty finish. It is not a charred meat, but there is some smokiness with the flavor. In terms of strength and body, easy full. You can feel the tobacco.
John: The first third kicked things off with sweet wood, a creamy retrohale and a mild nutmeg finish. My initial flavor impressions are that this is milder than I expected. A red pepper flake joins the retrohale at medium strength and has a long finish. A few more puffs showed a lingering light plus sweetness joining the post draw. Once the burn line hit the wrapper, there was a big punch of medium strength chocolate on the retrohale, with a medium lingering musty wood on the post draw. As the cigar progressed, the sweetness on the retrohale became more defined as raisin sweetness, with a short finish. Approaching the 15 minute mark, the relative strength of the various flavor components comes together at a medium level. Sweet creaminess drives the profile by the 20 minute mark, as the post draw musty wood falls to light plus.
Jiunn: The first third wastes no time being medium-full in strength out of the gate (medium body). In terms of flavors, it’s pretty rustic. Lots of white pepper, sharp minerals and baking spices, but there is also a gentle bread-like sweetness. Retrohaling shows the raw strength of the white pepper but also captures more of the bread-like sweetness. The finish is rather short with cedar. 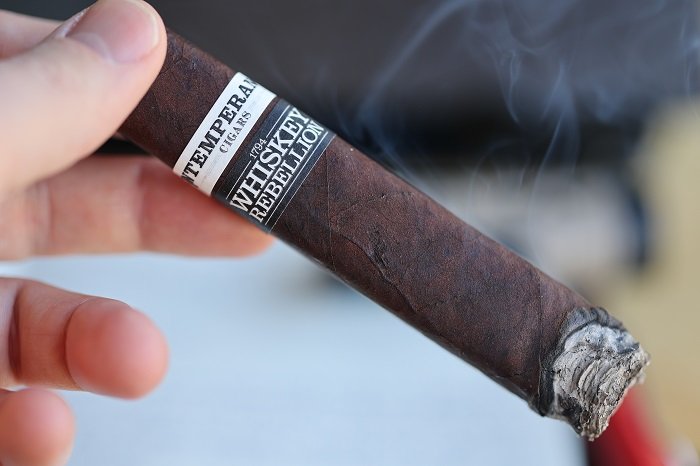 Aaron: As the second third begins, the musty wood and earth are even and now have a slight lead over the black pepper. At an inch in, all of the components are even. The retrohale is musty wood and earth with light black pepper. As the third comes to a close, the musty wood and earth are even, just ahead of the black pepper. The strength in this third remained at medium-full.
Seth: The second third shows some slight transitioning, and I am picking up some chili pepper paste flavors. It is paired with those earth notes from before, and it has some cocoa powder qualities as well. There is a finish of wood and leather as well, and that adds some depth. In terms of strength and body, the cigar is still smoking around a full level.
John: A syrupy, raisin sweetness with chocolate, and a musty cedar finish take the cigar into the second third. Cedar defines the post draw, and pushes into the main profile as the second third progresses.
Jiunn: The second third is the same as the first third. Still medium-full strength, medium body, with loads of white pepper, sharp minerals, baking spices and a soft bready sweetness. 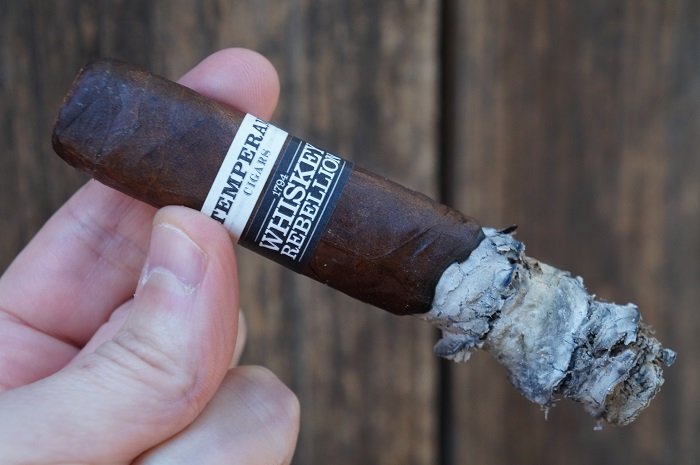 Aaron: The final third continues on with the musty wood and earth up front and the black pepper right behind. At a half inch in, the wood gains some char which brings a slight bitterness to the profile. The retrohale is now musty and lightly charred wood and earth. The cigar wraps up with the musty and charred wood, even with the earth, and the black pepper in the background along with light bitterness. The strength remained at medium-full.
Seth: The final third is the best part of the cigar. It is in this third that I am picking up black and red pepper notes, chocolate cake, stone fruit and earth. There are strong tobacco notes as well, but the blend is balanced, and flavor focused to the end. There are some sweet meat qualities as well. Tasty! Goodness is happening. In terms of strength and body, I would classify the final third as medium overall. Tons of depth and complexity.
John: Chocolate and wood move the profile into the last third. Earth takes home in the center of the profile at medium strength as the cigar settles in. Trailing sweetness comes through at the end of the draw. By the halfway point, citrus joins the flavor medley. A light plus bitterness is present on the post draw.
Jiunn: The final third loses some flavor complexities such that it’s now just white pepper, sharp minerals and baking spices. Strength and body finishes the same medium-full and medium, respectively. 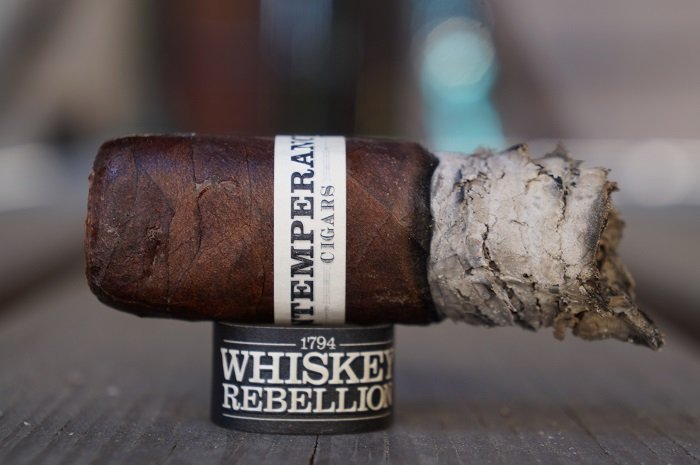 Aaron: The burn was a bit of an issue as it was wavy throughout. It required one touch-up as the burn got way off for half of the wrapper along with a single re-light.
Seth: The cigar was all over the place. The cigar went from wavy to even throughout.
John: The burn started out mildly uneven, correcting itself. The burn became uneven in the bottom of the first third, requiring a touch-up. It was uneven again in the second third, requiring a touch-up. The cigar went out in the last third requiring a re-light. The ash held on in one inch increments. I will note that the smoking conditions were some of the most favorable of the past 6 months of reviewing, with warm weather and no wind.
Jiunn: Burn performance had it’s share of issues. There was quite a bit of wrapper burn issues, causing multiple touch-ups and one total re-light. 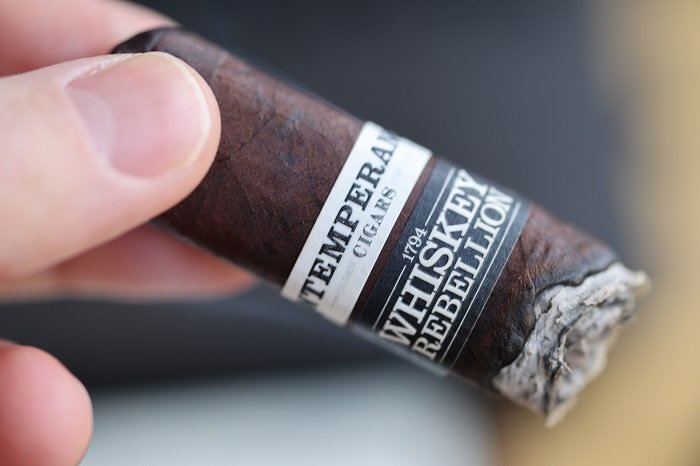 Aaron: The first third had a nice flavor profile with some pop. In the second third, as the earth played a bigger role and the black pepper eased back, it became average and the final third saw some char and light bitterness which knocked things down even more. There is definitely some strength to this blend as I was feeling towards the end of the first third. I was really hoping that profile from the first third would be where the RoMa Craft Intemperance Whiskey Rebellion 1794 Tarred & Feathered maintained itself, but it seemed to run out of steam on the flavor side of things. Probably not something I see myself coming back to, but for fans of the brand and those that like that strength punch, it might be a good fit.
Seth: The RoMa Craft Intemperance Whiskey Rebellion 1794 Tarred & Feathered was an average cigar for the first two third that turned into an enjoyable final third. If it smoked like the final third throughout, this cigar would have done very well for me. I think when the strength and body came down, the flavors were able to pop and turn into a cigar that I can fully get behind. The wrapper is too strong for me, and I think it takes away from the flavor profile in the blend. With that being said, if you love the Aquitaine, you will and should get behind this cigar.
John: The RoMa Craft Intemperance Whiskey Rebellion 1794 Tarred & Feathered was a good cigar experience, with the first and second thirds providing the best flavor experiences for me. It was interesting to taste the filler and binder first, and then get a big flavor injection of chocolate and musty wood once the wrapper added its influence. The draw was perfect, with the burn requiring attention in the form of two touch-ups and a re-light. I would definitely smoke more Intemperance Whiskey Rebellion 1794 Tarred & Feathered if I had them readily available. Total smoking time was a laid back 1 hour and 53 minutes.
Jiunn: I just smoked a lot of manbacco. Manbacco being defined as a strong cigar with heavy handed spice and earth. It’s not my jam as it was too much spice and earth without enough other sides of the flavor spectrum to round it out and keep it interesting. However, if you are a fan of what RoMa Craft typically provides, the RoMa Craft Intemperance Whiskey Rebellion 1794 Tarred & Feathered is yet another one that you will surely enjoy.