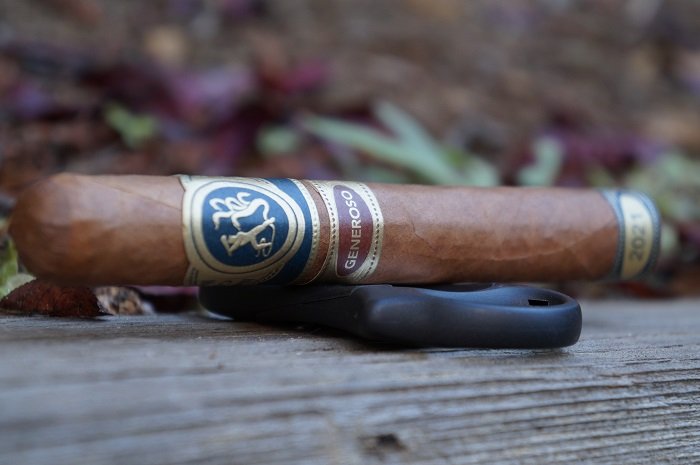 Aaron: The Ferio Tego Generoso has a wrapper that is light brown with a few decently raised veins present. The seams are very smooth and the caps expertly applied. There are three bands, with the primary and foot bands carrying the same navy blue and gold color combination. The primary carries the company logo and name while the foot denotes the year. The secondary band is gold and brown and denotes the line. The aroma from the wrapper is a light mix of wood and earth while the foot brings wood, tobacco sweetness and light spice. The pre-light draw brings aged cedar and an airy cotton candy like sweetness along with a mild spiciness on my lips and the tip of my tongue.
Seth: The Ferio Tego Generoso has a lovely Colorado wrapper. Classic and beautiful red clay coloring. Veins are small to medium in size. Few throughout. Firm cigar with a slightly oily and hide like texture. Aromas of earth, cherries and tobacco on the foot. Wrapper producing qualities of leather and spices.
John: The Ferio Tego Generoso comes in cellophane, and has a UPC sticker placed on the main body of the cellophane which avoids it being torn when opened. The cigar is triple banded, with the secondary band reading ‘Generoso’ and a foot band indicating ‘2021’. Aromas from the wrapper included bread and wood. From the foot, I could detect sweet, mild raisin and faint wood.
Jiunn: The Ferio Tego Generoso has a near natural Colorado cafe wrapper shade. Veins are well pressed, seams tight, bunch and roll even and head well wrapped. Aromas from the wrapper give plentiful wet barnyard and cedar. Aromas from the foot give a pop of dry red pepper spice and nuts. Cold draw tells of hay, cedar and plastic bags. 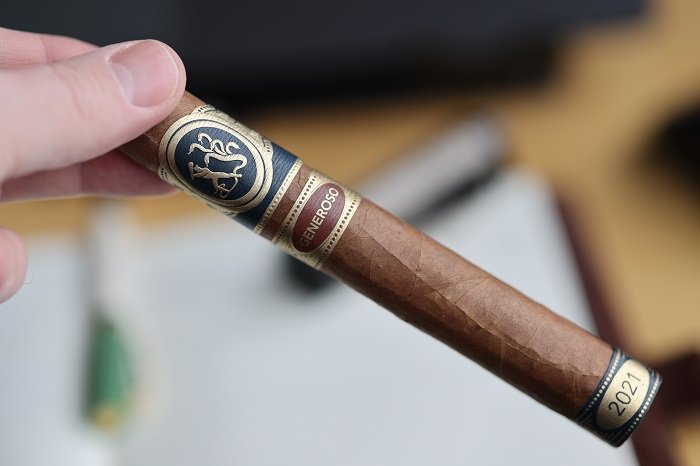 Aaron: The cigar begins with toasted cedar and sharp cinnamon. At a half inch in, the cinnamon has morphed into a bold black pepper. At three quarters of an inch, some mustiness joins the profile. The retrohale is toasted cedar along with a black pepper zing. At an inch and a quarter, some dry earth joins the profile. As the third comes to a close, the profile is toasted cedar up front with dry earth just behind and then mustiness and black pepper a bit further behind. The strength in this third was slightly above medium.
Seth: The first third begins with a lot of red pepper. I am picking up some leather and earth qualities as well, but it keeps coming back to the pepper. There are faint licorice and coffee notes on the finish. Medium-full in strength and body.
John: Wood and cocoa open the first third with a medium strength wood to finish. A delayed red pepper flake sat on my lips. Some mild astringency joined the post draw as it settled in. Not long after, graham cracker joins the retrohale. Leather moves into the post draw at medium-minus strength. I’d described the post draw after taste as chewy. There’s an interesting barley cereal that moves into the middle of the profile. Approaching the halfway point, cinnamon and baking spices are on the retrohale. The astringency has largely fallen off at this point, as the leather on the post draw has moved down to light-plus strength. Moving towards the second third, leather intensifies again back to medium, bringing earth with it.
Jiunn: The first third starts with a heavy dose of palate sticking red pepper spice. The spice is all the way towards my rear palate, lasting for minutes. Along with the spice comes an overall dryness, cedar bitterness and roasted nuts. Retrohaling is rough, as the red pepper spice comes through way too fierce. Strength is medium-full, body is medium. 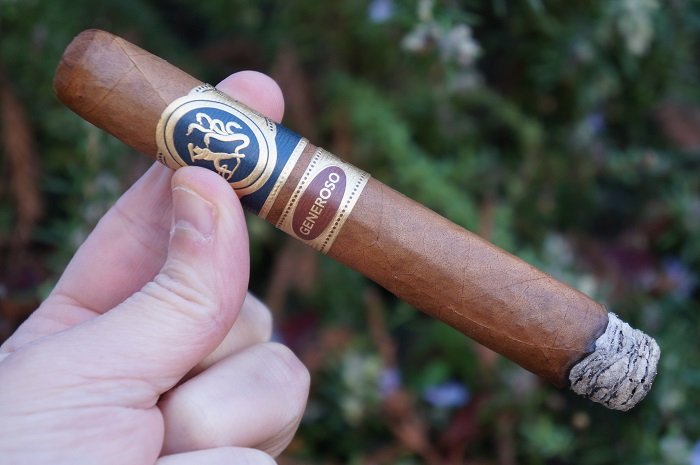 Aaron: As the second third begins, the black pepper has lessened a bit. At a half inch in, the toasted cedar and dry earth are even. The retrohale is now toasted cedar, dry earth and mild black pepper. As the third wraps up, the toasted cedar and dry earth are even up front with mustiness a bit behind and black pepper in the background. The strength remains at slightly above medium.
Seth: The second third shows some transitioning. I am getting cream notes now, they are on top of the pepper that is still present from the first third, and it is paired with this burnt Texas toast quality. Leather and dry wood and earth on the finish. Medium-full in strength and body.
John: The second third started out earth and leather forward, as the earth rapidly moves up to medium-full strength, taking over the profile. Sweetness eventually replaces the earth at the front of the profile, as the earth intensity falls back to medium-minus. The leather is down to light-plus strength by this point. Approaching the halfway point, creamy wood joined in.
Jiunn: The second third tapers back the spice levels. What I’m left with is the existing dryness, cedar bitterness and roasted nuts. Strength and body remains medium-full and medium, respectively. 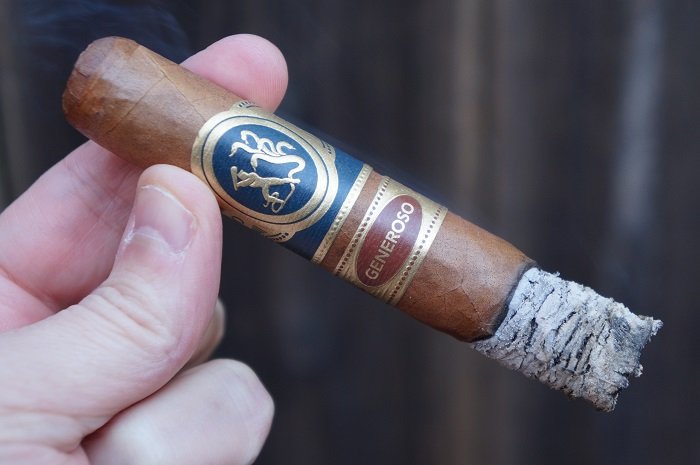 Aaron: As the final third begins, the dry earth takes a slight lead over the toasted cedar. At a half inch in, the toast level becomes very heavy and a light bitterness joins in. The retrohale remains toasted cedar, dry earth and mild black pepper. At an inch in, the toast transitions to char. The cigar finishes up with dry earth slightly ahead of the charred cedar with mustiness just behind that and black pepper and bitterness in the background. The strength remained at slightly above medium.
Seth: The final third delivers that peppery and creamy flavor profile, and it is paired with tobacco and herb notes. The finish is that of leather and wood, and there is a faint mineral finish. Medium-full in strength and body.
John: Creamy wood and light-plus baking spices take the retrohale into the last third. Light-plus leather and wood combine into the post draw, as the earth component moves to be a background flavor. Leather moves to the front of the profile by the halfway mark. Some tannins join the wood on the post draw. In the bottom half, mild cocoa moves into the center of the profile.
Jiunn: The final third shows no material changes. The dryness felt all along is now paired up with leather. Other than that, it’s still the same cedar bitterness and toasted dried nuts. Strength and body finishes the same medium-full and medium. 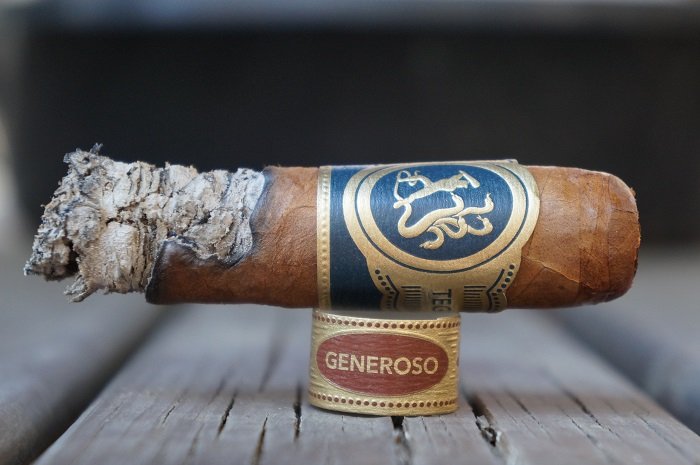 Aaron: The burn was a bit wavy throughout and the cigar went out once, requiring a re-light. The ash held on in inch and a quarter increments.
Seth: Nice burn throughout.
John: The burn started out straight, but by the halfway mark of the first third, a section of wrapper wasn’t burning and the cigar went out, necessitating a re-light. The burn continued to struggle in the second third, and again in the last third going out again, requiring another re-light. It went out again in the last third requiring another re-light. In total, three re-lights were required through the review which no doubt impacted the flavor performance.
Jiunn: The wrapper refused to burn evenly, creating a few touch-ups to get it back on track. Other than that, no concerns. 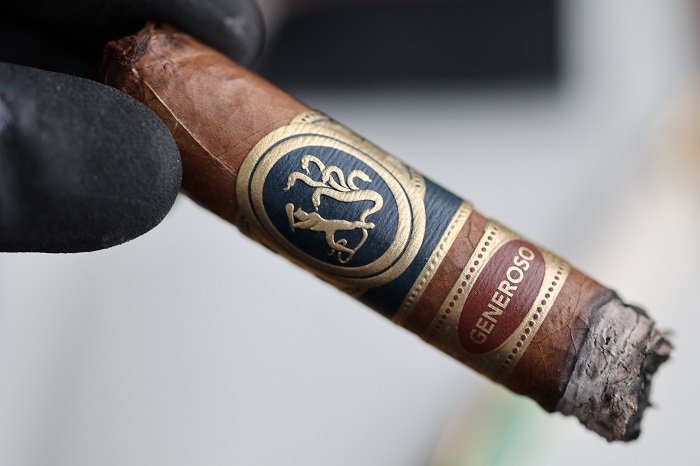 Aaron: The cigar began with toasted cedar and sharp cinnamon which quickly morphed into bold black pepper. Some mustiness and dry earth joined a bit later. The dry earth increased, eventually taking the lead while the toasted cedar built up to char and added some bitterness. The flavor profile of the Ferio Tego Generoso was average through the first two thirds and dropped down in the final third due to the char and bitterness. I wasn’t impressed with this release as the flavor profile was too dry an unexciting. Couple that with the high price point and I don’t see revisiting this cigar.
Seth: I was disappointed with the Ferio Tego Generoso. The cigar showed some transitioning throughout each third, but overall, there was a lack of complexity and depth. I thought the cigar had a finish that was slightly off, and it had me trying to identify a flavor that I did not like. There was a nice burn and draw throughout, but the cigar just came up short. Looking at the blend, it came off as something new and different, but it failed to deliver something enjoyable.
John: The Ferio Tego Generoso started out promising with some medium-full flavors playing off of each other, but as the cigar progressed the balance fell apart and I didn’t find it as engaging. The draw was nearly flawless, with a small amount of resistance. The burn was a bit of a disaster with three re-lights which are three more than I would find tolerable on a cigar at this price point. Given the slightly above average flavor profile, combined with the breakdown of burn performance, I would find it very difficult to justify another $21 purchase. Total smoking time was a value forward 2 hours and 28 minutes.
Jiunn: Unlike the Elegancia, the Ferio Tego Generoso is not for me. The only thing generous about the cigar was the first third spice and leather dryness. These flavors are not by any means bad flavors. But if it’s just mainly these components (which it was), then it becomes a bit unpalatable, especially for $21. I’ll save my money for the Elegancia and future blends.