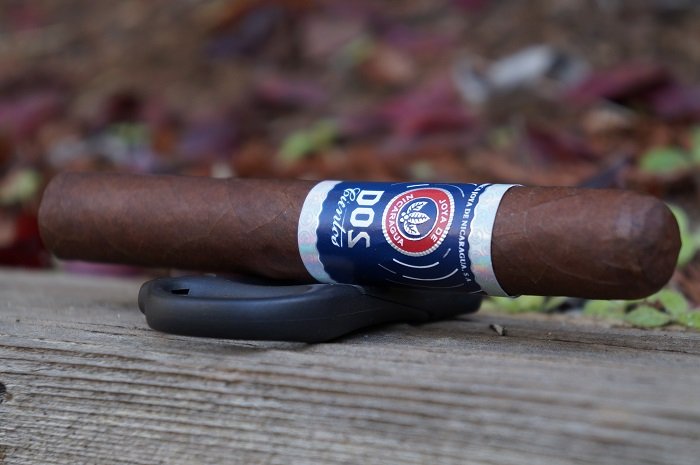 Aaron: The wrapper on the Joya de Nicaragua Dos Cientos is a uniform medium brown and has a few lightly raised veins present. The seams are slightly raised while the caps are very well applied. The band is blue, red, white and silver with holographic borders and strip in the back. It denotes the company, series and line. The aroma from the wrapper is a mix of dark earth and cardboard while the foot brings wood, stone fruit sweetness and mild baking spice. The pre-light draw is an interesting combination of cedar, floral notes and sweetness.
Seth: With small veins and tooth throughout, the Joya de Nicaragua Dos Cientos has a nice Colorado Maduro coloring with a slightly oily shine. It is very firm throughout, and it has an aroma of nuts, leather, wood and earth. Well constructed cigar.
John: The Joya de Nicaragua Dos Cientos is cellophaned, and has a UPC sticker with an integrated tear point to leave it intact when the cellophane is opened. The cigar has a singular, wide band of blue on metallic silver, with a holographic Joya de Nicaragua symbol embedded. Aromas from the wrapper included molasses, a spirit barrel aged sweetness and barnyard. From the foot, I could detect aged tobacco, burlap and a musty quality.
Jiunn: The Joya de Nicaragua Dos Cientos has a quality oily Colorado Maduro wrapper shade. Veins are well pressed, seams tight, bunch and roll even and head well wrapped. Aromas from the wrapper give over ripe plums and campfire. Aromas from the foot give the same over ripe plums, cedar and a hint of white pepper spice. Cold draw reveals persimmons, light campfire and hay. 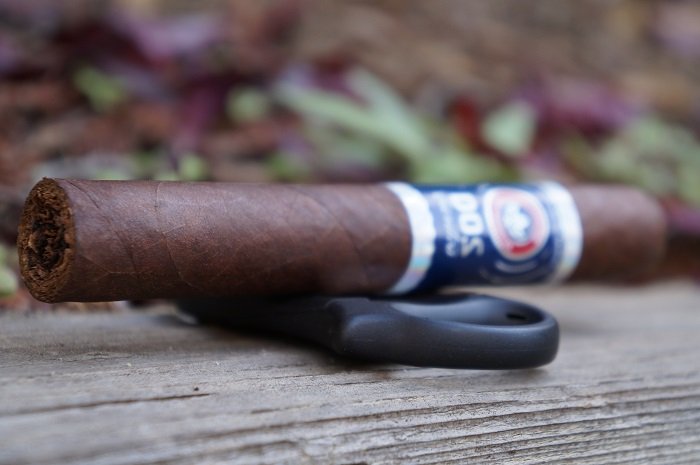 Aaron: The cigar begins with a very mellow combination of cedar, floral and light mustiness. At a half inch in, a light chalkiness joins the profile. The retrohale is musty cedar and the floral note. At an inch in, the chalkiness is very faint. As the third comes to a close, the musty cedar is up front with the floral note just behind and a very faint chalkiness in the background. The strength was slightly below medium.
Seth: The first third is great and I am picking up herbal notes with spices, and leather. There are some pepper, cream and chocolate chip qualities as well, and the finish has some nuts, tobaccco and green apple. Complex while smoking at a medium-full level for strength and body.
John: The first few puffs were flavors of sweet, aged wood and wood to finish. The aged wood comes through the retrohale, and brings with it barrel aged sweetness at light-plus intensity. Sweet wood settles into the middle of the profile. By the halfway point, some mild milk chocolate comes through. I found the first third to be far more delicate than I was anticipating.
Jiunn: The first third is great. Prunes, baking spices, sweet bread and a little bit of semi-sweet chocolate. Retrohaling shows greater baking spices and also some nice tart cherries. The finish is relatively clean, with cedar, toast and prunes. Strength and body is medium. 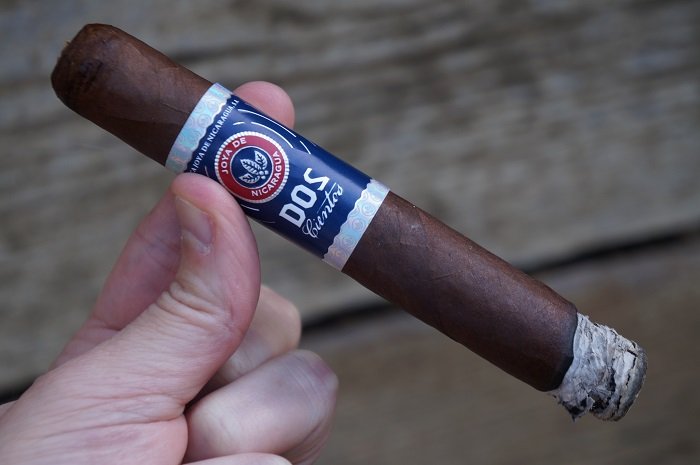 Aaron: As the second third begins, the cedar gains a light toast. At a quarter inch in, the chalkiness is now in combination with dry earth and this combo picks up a bit in fullness. I’m now also getting an interesting dried banana chip note. At a half inch in, the chalk/earth combination is even with the floral note behind the musty, toasted cedar and the banana note is gone. The retrohale is musty, toasted cedar with light amounts of floral and dry earth. The third wraps up with musty, toasted cedar up front with the chalk/earth combo right behind and the floral note a bit behind that. The strength in this third remained at slightly below medium.
Seth: The second third is good. I am picking up herbal spices, and it has some cinnamon, pepper, curry and cumin as well. Lots of spices. Leather, tobacco and nuts on the finish. Meidum-full in strength and body.
John: Chocolate combines with wood to lead into the second third. The post draw still consists of a mild, aged wood finish. The profile becomes wood forward approaching the halfway mark, with mild tannins on the post draw.
Jiunn: The second third shows effervescence to the baking spices. Also, the stone fruit changes a bit to less prunes and more of a sweet cherry note. The other notes of sweet bread and semi-sweet chocolate are still intact. Strength and body remains medium. 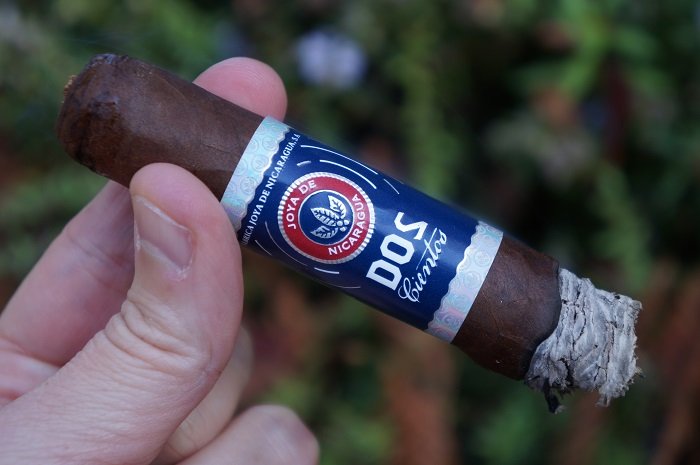 Aaron: As the final third begins, the toast level picks up. At a half inch in, the chalk/earth combo is now even with the musty, toasted cedar and the floral note is in the background. The retrohale is now musty, toasted cedar and dry earth. As the cigar wraps up, it maintains the profile of musty, toasted cedar and chalk/earth combo up front with the floral note in the background. The strength in this third bumped up to medium.
Seth: The final third is right in line with the second third. Herbal notes with lots of spices. Peppery while deliveirng cinnamon and curry. Lots of wood and earth notes with finishes of cocoa powder. Medium-full in strength and body.
John: Light-plus strength wood moves the profile into the last third. The cigar still finishes with wood, and it does not linger long on the palate. Moving towards the halfway point, mild tannins come back to the finish of each draw. Not long after, mild earth moves into the middle of the profile.
Jiunn: Final third shows less stone fruits but what replaces that note is equally tasty. There’s greater influence in sweet bread. This note paired with semi-sweet chocolate and baking spices creates a well balanced formula. Strength and body finishes medium. 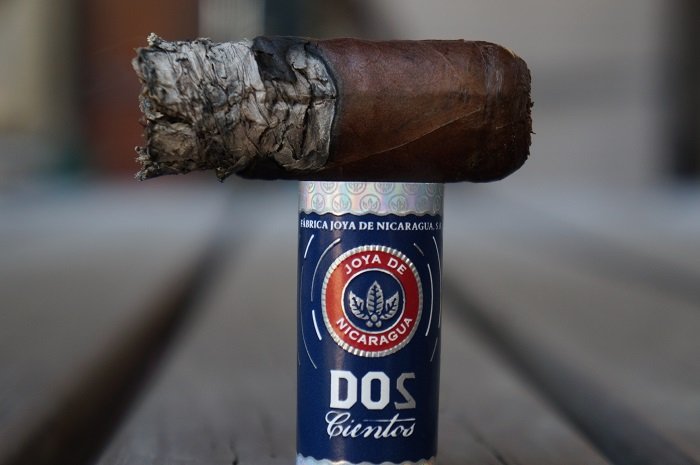 Aaron: The burn line was a bit wavy throughout. The cigar did go out once in the second third, requiring a re-light. The ash held on in inch and a half increments.
Seth: Very good burn from start to finish.
John: On all the samples reviewed, the burn was consistent and required no intervention. Ash held on up to 1-1/2 inch increments before I would tap it off.
Jiunn: Perfect burn performance. Even, solid ashes, cool burning temperature and ample smoke production. 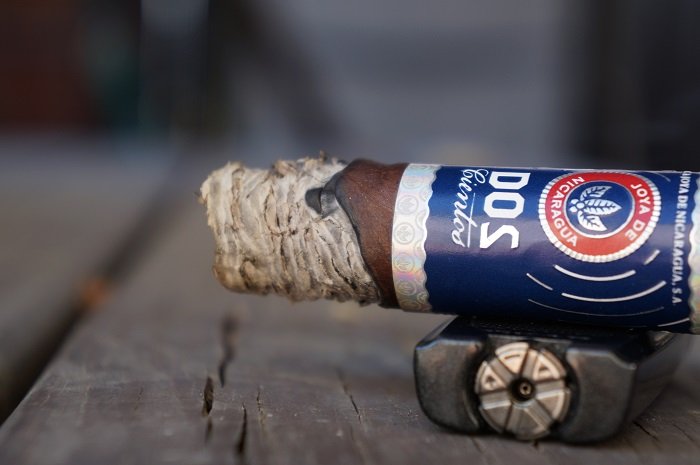 Aaron: The draw was fairly snug throughout and a draw tool provided no relief.
Seth: Perfect draw.
John: The draw had some resistance to it, roughly 2-1/2 to 3 notches into the resistant spectrum.
Jiunn: Perfect draw performance as well, giving the ideal air flow.

Aaron: The cigar began with a very mellow combination of cedar, floral and light mustiness. Some chalkiness joined in fairly quickly. The second third saw the cedar gain a toast note and some dry earth paired up with the chalkiness. The Joya de Nicaragua Dos Cientos had an average flavor profile throughout. It had a good base, but didn’t provide any supporting notes to really elevate it. The tight draw may have had some effects on the flavor with needing consistently deliberate draws. I will come back to this cigar down the road to see if time helps the blend and I can get a better constructed version, but as of now with the experience and the price point, it’s hard to recommend as something to try.
Seth: The Joya de Nicaragua Dos Cientos is a balanced cigar that is complex from beginning to end. Nice bit of depth with wonderful flavors. Fantastic start. Would have loved to smoke the first third from beginning to end with all that is delivered. Excellent construction. What is there to say except that Joya de Nicaragua knows what they are doing. A fantastic multi-nation blend that one may not think Joya would or could create. They continue to produce fantastic new blends when released, great vitola expansions, and keep the quality up on their existing brands. Job well done!
John: I found the Joya de Nicaragua Dos Cientos to be a nuanced and elegant blend, which seems all too appropriate for a Limited Edition. The burn was flawless, and the draw had some resistance to it. I have a few Dos Cientos remaining, and I look forward to revisiting them in the coming weeks. Total smoking time was 2 hours and 1 minute.
Jiunn: Surprisingly, I’ve had all misses this year when it comes to Joya, until now. I’ve had the opportunity to smoke three of these Joya de Nicaragua Dos Cientos and all have been consistently good. There’s nothing to dislike here. It has stone fruit, sweetness, spice and earthiness, all in a well melded manner. I’ll take dos more.