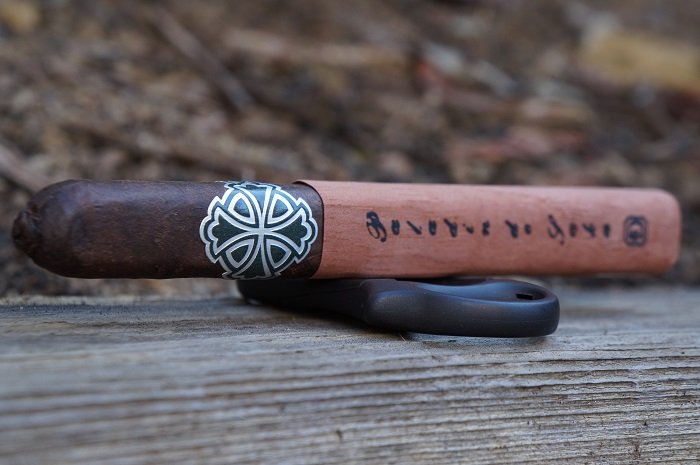 Aaron: The soft rectangle pressed Dunbarton Tobacco & Trust Sin Compromiso Selección Paladin de Saka has the dark green and silver band that is typical of the line along with a cedar sleeve that runs from just under the band down to the foot and denotes the vitola. After sliding off the cedar sleeve, a dark brown, marbled wrapper with some tooth is present. The seams are a bit raised while the head is finished off with a tightly wound pigtail. The aroma from the wrapper is slightly damp wood and bakers chocolate while the foot brings wood smokiness. The pre-light draw brings cedar and wood smokiness.
Seth: Finished with an oily wrapper, the dark maduro coloring gives off an oily dark chocolate bar appearance. The pigtail cap is fantastic and there is a fine coarse texture with the Dunbarton Tobacco & Trust Sin Compromiso Selección Paladin de Saka. Small to medium sized veins are present throughout. Aromas of rich earth, leather, tobacco and stone fruit.
John: The Dunbarton Tobacco & Trust Sin Compromiso Selección Paladin de Saka comes in cellophane, and does not have a UPC sticker. Additional complications included a cedar wrap covering two-thirds of the cigar and indicating Selección Paladin de Saka. Additionally, the cap on the cigar is a pigtail cap, and the cigar has a soft box press. Aromas from the wrapper included sweet tobacco, and a combination of mild earth and peat. Sweet tobacco and hay are present from the foot.
Jiunn: The Dunbarton Tobacco & Trust Sin Compromiso Selección Paladin de Saka has an even, gorgeous Colorado Maduro wrapper shade, also showing even traces of tooth. Veins are well pressed, seams tight, bunch and roll even and head well wrapped. Aromas from the wrapper tell of smoked meat, campfire and hay. Aromas from the foot give subtle campfire and cedar. Cold draw tell cedar, hay and slight metallic notes. 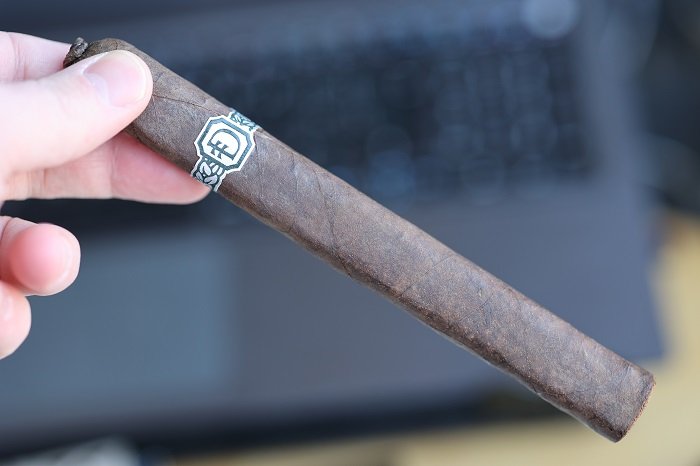 Aaron: The cigar begins with lightly toasted cedar along with some mellow earth and smoky notes. At a half inch in, some creaminess joins the profile. The retrohale brings toasted cedar and mustiness. At an inch and a half in, the toasted cedar is up front with some mustiness and creaminess a bit behind along with earth and smokiness in the background. As the third comes to a close, the cedar becomes very detailed. The strength was slightly below medium.
Seth: The first third opens with bits of nuts and creamy qualities. I am picking up some cashew notes. There are spice notes present as well, and it has some red pepper traits. Bits of coffee and cocoa notes are there, and I am getting raisins on the finish. Medium-full in strength and body.
John: A rich, sweet tobacco greets me on the first few puffs. Sweet food finishes, as pepper, baking spices and creamy tobacco develop on the retrohale. It doesn’t take many more puffs before powdered cocoa joins the retrohale flavor party. As the cigar progresses, a light-plus strength pepper shows up on the post draw. Moving towards the halfway mark, wood joins the finish. In the bottom half, that wood moves to the front of the draw profile. Not long after, the powdered cocoa, along with a mild, dry wood join the post draw.
Jiunn: The primary item I think about is the mouthfeel. It provides mouth layering tannins. The tannins are complemented by dry cocoa, fine dirt, cedar and subtle dry red pepper spice. Retrohaling gives a Mexican hot chocolate vibe. Strength and body is medium. 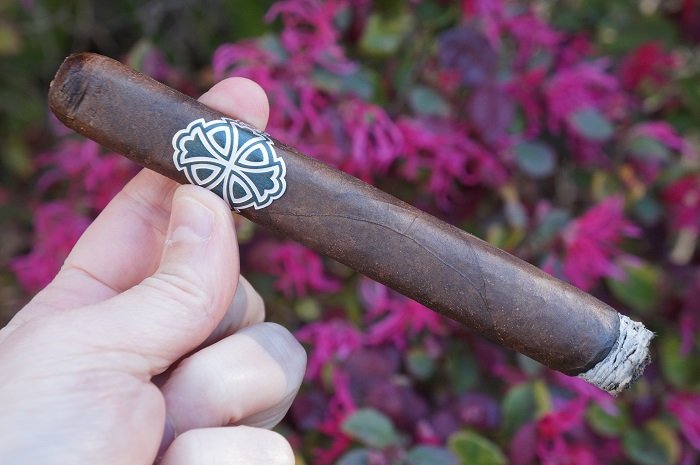 Aaron: As the second third begins, a mild baking spice joins the profile. At a half inch in, the creaminess has become very light while the mustiness is now up front with the toasted cedar. At an inch in, the musty, toasted cedar is becoming a bit dry. The retrohale remains musty, toasted cedar. At an inch and a half in, the creaminess has departed. As the third comes to a close, the profile is musty, toasted cedar up front, with earth and baking spice a bit behind and mellow smokiness in the background. The strength bumped up to medium.
Seth: The second third delivers that flavor profile of cream, cocoa and raisins. I am picking up those spice notes from before, and there is some sweetness and red pepper present. Like before, medium-full in strength and body.
John: Dry wood, cocoa and light-plus strength baking spices and pepper lead the cigar into the second third. Sweet tobacco takes home in the center of the profile after just a few puffs. Tannins combine with the dry wood into the post draw by the halfway point. As the bottom half progresses, mild leather and earth join the post draw as well.
Jiunn: The second third is a continuation of the first third, but with a couple minor tweaks. The profile is still full of tannins, giving the same dry cocoa. But, the red pepper spice upticks a notch, and there is also some nice minerality to the profile. Strength and body remains medium. 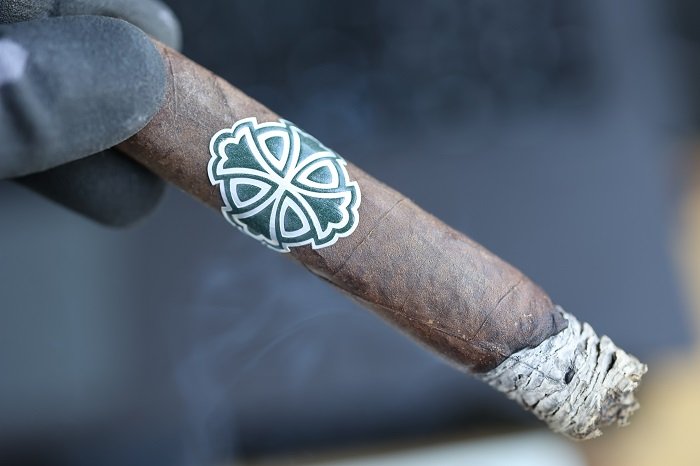 Aaron: The final third begins, with a slight bitterness joining the profile. At three quarters of an inch in, the earth is now even up front with the musty, toasted cedar. The retrohale is now musty, toasted cedar and dry earth. At an inch in, the toast level becomes pretty heavy. As the cigar wraps up, the toast has transitioned to char, which increases the bitterness level. The strength remained at medium.
Seth: The final third shows some improvement from the second third, and I am getting nice flavors of cream, cocoa, earth and raisins. There is some sweetness present with the cigar, and it has this baking spice with red pepper finish. Medium-full in strength and body.
John: Baking spices, earth and wood make up the retrohale in the last third. A mild chocolate joins shortly after as the last third settles in, but I find it’s largely run over by the earth. One or two puffs later and some minerality is coming through. By the halfway point, the earth has moved to the front of the profile.
Jiunn: The final third flavor profile becomes less distinct and sort of just meshes with each other. The only distinctive part is the retrohale, which is still the same as the first two thirds. Strength and body is unchanged at medium. 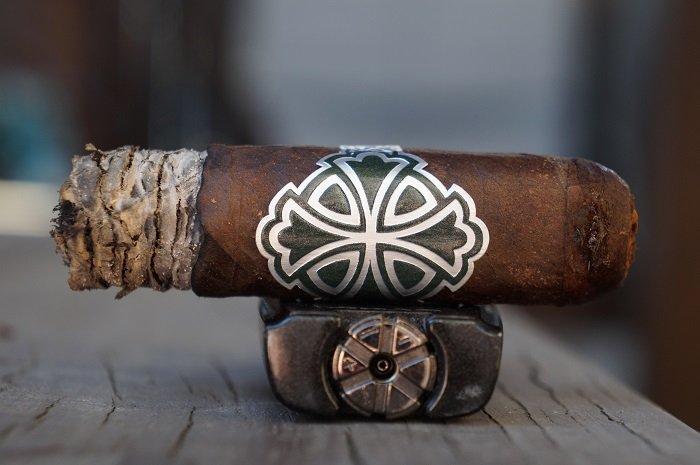 Aaron: The burn was perfect throughout. The ash held on in about one inch increments.
Seth: Very nice burn throughout. Well-constructed cigar.
John: The burn is straight through the entire review with the ash dropping fairly consistently at the half inch mark.
Jiunn: Burn was flawless. Even burn, solid ashes, cool burning temperature and good smoke production. 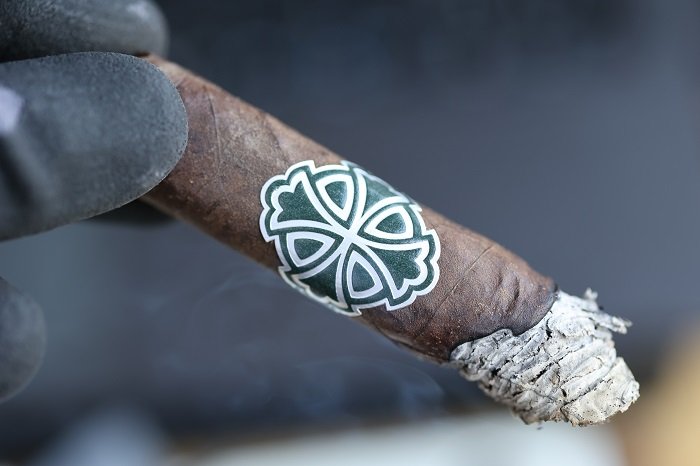 Aaron: The draw was slightly tighter than I prefer, but didn’t cause any issues with the smoking experience.
Seth: Wonderful draw from beginning to end.
John: The draw has a mild amount of resistance to it, starting at roughly 2-1/2 to 3 notches, which would have been a good rating. After a few puffs in the first third, the cigar opens to 1-1/2 to 2 notches which is a very good rating.
Jiunn: The draw was slightly too snug. Most importantly, it did not hinder the flavor experience.

Aaron: The cigar began with lightly toasted cedar along with some mellow earth and smoky notes. Some creaminess joined a bit later. The second third saw some baking spice join in and the creaminess depart. The final third saw the toast level increase and then transition to char and had some bitterness. Construction was great aside from a slightly firm draw. The Dunbarton Tobacco & Trust Sin Compromiso Selección Paladin de Saka started well with a mellow strength level and nice combination of flavors. Things dropped to average in the second third as the creaminess departed and some dryness settled in and maintained this level the rest of the way. This cigar performed very similarly to the previous iteration we reviewed. In terms of just the smoking performance, this is right on the border of something I’d come back to, but the very high price point kind of discourages it.
Seth: If you know me as a smoker, then you know that I am not one that typically likes when a blend I enjoy gets “upgraded” in the sense that this new vitola has more ligero or higher priming tobacco overall in the blend. That typically results in me liking it less. To no surprise, that is the case with the Dunbarton Tobacco & Trust Sin Compromiso Selección Paladin de Saka. I thought the new vitola was too in your face, and lacking complexity. There was little transitioning throughout, and besides not having a strong start, it went downhill in the second third. It tried to resurrect itself in the end, but it was too little too late. I will be interested in seeing how I score this cigar compared to the others, I was higher on Sin Compromiso initially, but I am not sure where I will land now. This did not impact the score, but I did not like the vitola. I am not a fan of a pressed 7” by 52 offering.
John: I’m puzzled at my experience with the Dunbarton Tobacco & Trust Sin Compromiso Selección Paladin de Saka, as the experience I had during the review is a step down from the experience I had casually smoking the cigar in Las Vegas during the TPE convention. The first third was the same, offering up a dark and rich medley of flavors that was engaging. That complexity was lacking from the second and last third, but still provided a pleasant experience. The draw had a mild amount of resistance to it, and the burn was perfect. Since the cigar I smoked in Vegas was much better I’m inclined to sit down with the Paladin de Saka a third time to see which experience lines up closer. Total smoking time was 2 hours and 1 minute.
Jiunn: Having smoked (I think) three iterations of Sin Compromiso, one main theme is clearly evident. The mouthfeel of tannins is superb. The flavors are overall on point too, providing a finer earthiness of cocoa, cedar, minerals and dry red pepper spice. The price point of the Dunbarton Tobacco & Trust Sin Compromiso Selección Paladin de Saka is tough to swallow though. But I guess excluding the subjectivity of flavors, the look and technical performance may warrant it?