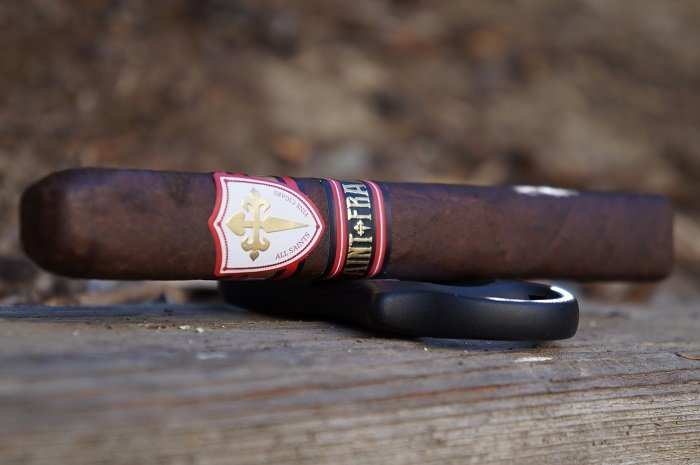 Aaron: The rectangle pressed All Saints St. Francis Toro has a wrapper that is a uniform dark brown with some lightly raised and knotty veins. The seams are smooth and the caps are well applied aside from some slight lifting at the edges. There are two bands, with the primary carrying the company logo and having a white, gold, black and red color combination. The secondary band has the same color combination and denotes the line. The aroma from the wrapper is wood and dark earth while the foot brings stewed fruit and tobacco. The pre-light draw brings lightly spicy cedar and faint stewed fruit along with a mild spiciness on my lips.
Seth: Beautiful in appearance, the All Saints St. Francis Toro has a maduro wrapper that is marbled in coloring with minor tooth, veins and oils. It has this coloring of damp warm coffee grinds. Aromas of rich earth, manure, sweet spices, stone fruit and leather.
John: The All Saints St. Francis Toro comes in cellophane and has a UPC sticker with a space designed to allow it to tear when the cellophane is opened, leaving the UPC intact. The cigar is box pressed, and I get aromas of baking spices, dates and wood off the wrapper. From the foot, I was smelling sweet tobacco, dates, hay and wood.
Jiunn: The All Saints St. Francis Toro has a rustic Colorado Red wrapper shade. Veins are well pressed, seams tight, bunch and roll even and head well wrapped. Aromas from the foot tell of cedar and milk chocolate bars. Aromas from the foot give dark chocolate and assertive white pepper spice. Cold draw gives (surprise) milk chocolate bar and a hint of baking spices. 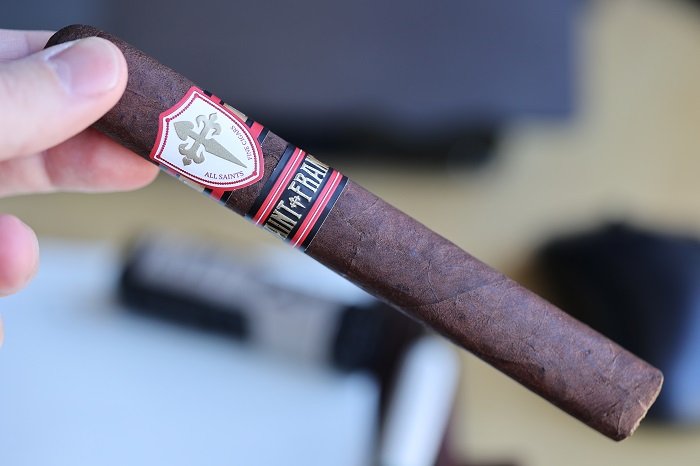 Aaron: The cigar begins with dark earth and black pepper. At a quarter inch in, an oak note joins the profile. At a half inch in, the dark earth and black pepper are fairly heavy and have a long finish. The retrohale is an even mix of oak and dark earth along with a mid-level black pepper zing. As the third comes to a close, there is a little bit of toastiness for both the oak and the dark earth while the black pepper is just slightly behind. The strength in this third was slightly above medium.
Seth: The first third begins with soft spice notes, and it has this Asian spice quality. I am picking up some cream, cocoa, coffee, earth and wood notes as well. It is balanced while at the same time rich. As the third finishes, it becomes spicier as well. In terms of strength and body, I would classify the cigar as a solid medium-full.
John: The profile kicks things off with a mildly toasted, dark chocolate and wood profile. Some espresso forms on the retrohale, along with creaminess that balances it out. Caramelized brown sugar takes up the center as the cigar progresses. Dark espresso and cream move to the front of the profile as the cigar continues. In the bottom half, some earth joins the espresso on the retrohale.
Jiunn: The first third is full flavored. A great balance of naturally sweet and roasted nuts, cocoa and surrounding dry red pepper spice. Retrohaling highlights both the nuttiness and red pepper spice. The finish is a bit non-eventful though, being mainly faint dry red pepper spice driven. Strength is medium-full, body is medium. 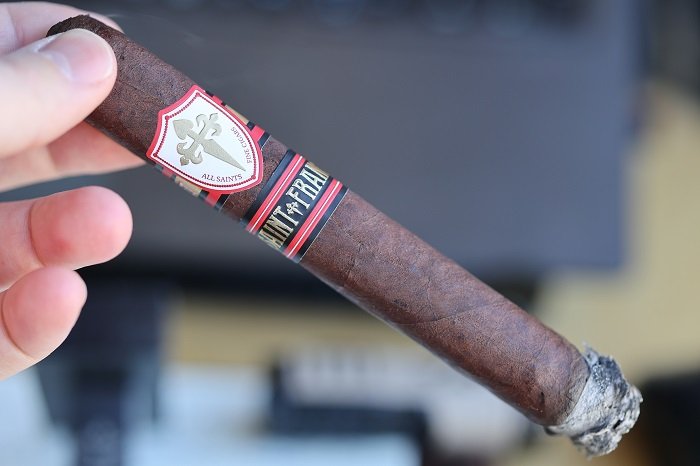 Aaron: The second third continues with the lightly toasted oak and dark earth while the black pepper has lightened up a bit. The retrohale is toasted oak up front, dry earth in the middle and black pepper in the background. The third wraps up with the toasted oak and dark earth even and the black pepper a bit behind. The strength remained at slightly above medium.
Seth: The second third delivers a flavor profile of earth, cream and nuts. There are some wood and leather notes as well, and the finish has this pepper spice quality. In terms of strength and body, the cigar is smoking around a medium-full level.
John: I would describe the start in the second as earthy espresso, followed by cream, which is then run over by wood and earth on the finish. By the halfway point, the wood has taken the lead with creamy espresso and earth moving into the center. As the second third continues, the earth fades with the espresso leading towards the end of the third.
Jiunn: The second third continues to be full of flavors. It’s shifted a slight bit to being more cocoa and red pepper spice, but I still get a subtle sweet and nuttiness. Strength has ramped to full bore max, while body remains medium. 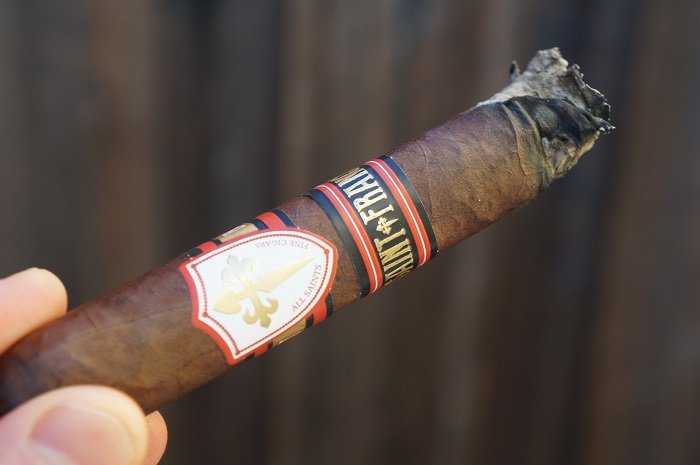 Aaron: The final third sees some mustiness join the profile. The retrohale is now musty, toasted oak and dry earth. At an inch in, the black pepper is very mild. The cigar wraps up with toasted oak and dark earth with some mustiness in the middle and black pepper in the background. The strength remained at slightly above medium.
Seth: The final third is fairly similar to that of the second third. I am picking up earth, leather and wood notes, and it is paired with that peppery spice and cocoa flavor profile. Like before, medium-full in strength and body.
John: The final third starts as creamy earth with a cedar finish that carries mild tannins into the post draw. Some mild char is present in the center of the profile as it progresses. Dark chocolate also joins the middle of the profile by the halfway point.
Jiunn: The final third shows no changes from the second third. Still full strength and medium bodied, with full flavors of cocoa, red pepper spice and subtle sweet and creamy nuttiness. 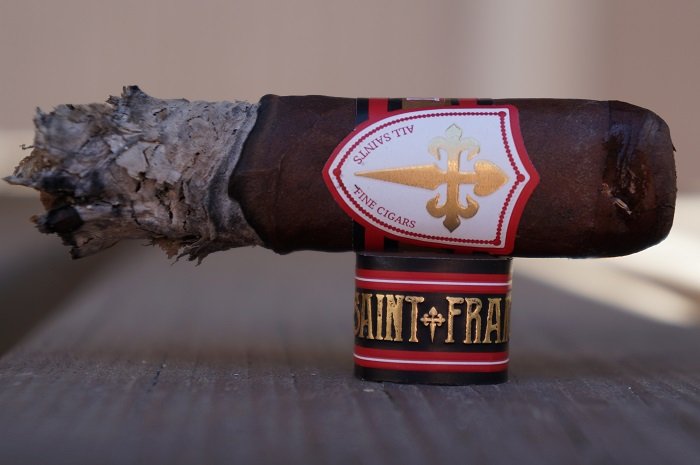 Aaron: The burn line was fairly wavy throughout. One touch-up and one re-light was required.
Seth: Solid burn line throughout. Not great, but solid.
John: The cigar started out uneven with a section of wrapper not burning. Eventually, I touched it up. It was uneven again in the second third, requiring another touch-up. The cigar went out in at the halfway point, requiring a re-light. The cigar struggled to stay lit in the last third, and did require another touch-up due to lopsided burn issues.
Jiunn: Burn performance was a nightmare. I lost count how many times I had to either touch-up or perform full re-lights. 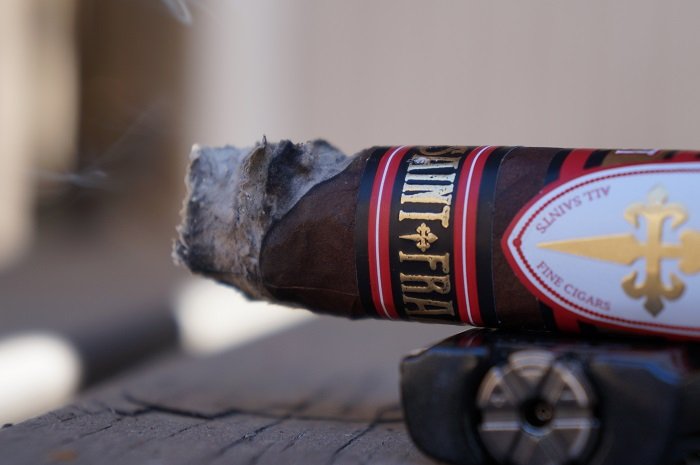 Aaron: The draw was perfect, with just the right amount of resistance that I prefer.
Seth: Nice draw from start to finish.
John: The draw was towards the open spectrum, roughly 1-1/2 to 2 notches which puts it into the very good rating for a draw.
Jiunn: The draw on the other hand was perfect, giving the ideal air flow.

Aaron: The flavor profile was focused around toasted oak and dark earth along with black pepper. Some mustiness joined in the final third. The burn had some flaws, but nothing too drastic. The All Saints St. Francis Toro had a nice start with a full flavor combination, but lost some of it’s richness going into the second third and maintained that level the rest of the way. If you’re a fan of oak and earth, this will be right up your alley. I don’t really see coming back to this cigar all that frequently as it just couldn’t deliver the richness throughout the entire smoking experience.
Seth: I really thought the All Saints St. Francis Toro was beautiful in appearance, but the overall blend was average. It delivered a core flavor profile that was somewhat lacking, and there was very little depth and transitioning throughout. Nice strength and body, and solid construction. Not a blend that is going to grab a lot of smokers in my opinion, and an offering that is similar to a lot of other offerings in humidors.
John: Despite the poor burn performance, which had to have had a negative impact on the flavor profile, the All Saints St. Francis Toro delivered a dark, espresso and chocolate forward profile that was engaging through most of the review process. I’d be eager to try another St. Francis to see how it would perform without touch-ups or re-lights. All Saints clearly has a winner here with this release. Total smoking time was 1 hour and 53 minutes.
Jiunn: Full flavored and deceptively strong. I don’t mind the full strength when the flavors are so abundant. An equal balance of sweet, nutty and spice. The only let down is the annoying burn. But luckily, it didn’t affect the flavors. But for the flavors, I’d gladly smoke the All Saints St. Francis Toro again and again.