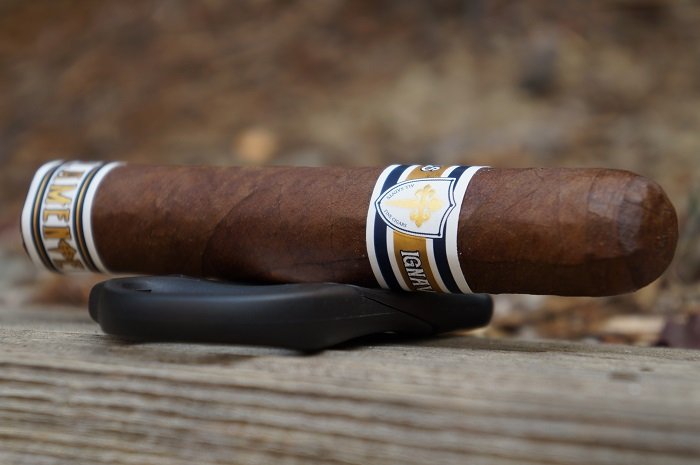 Aaron: The wrapper on the All Saints Solamente is a slightly reddish dark brown and has a few decently raised veins present. The seams are smooth and the caps are well applied. The cigar feels fairly light for its size. There are two bands, with the primary being the traditional design for the company in a white, gold and navy blue color combination. The foot band carries the same color combination and denotes the line. The aroma from the wrapper is a mix of musty wood, dry earth and light cocoa powder. The foot brings a mix of stone fruit sweetness and spicy cedar. The pre-light draw brings stone fruit sweetness and light cedar along with a mild spiciness on my lips.
Seth: The overall pre-light appearance of the All Saints Solamente is average. However, I am a sucker for the color combination of white, dark blue and gold. Because of that, I reward your house 50 points. Colorado to Colorado-Maduro wrapper. Toothy with small sized veins throughout. Oily in texture with aromas earth, wood, cherries, chocolate and coffee.
John: The All Saints Solamente comes in cellophane, and has a UPC sticker that tears in half when the cellophane is opened. The cigar comes double banded, with the secondary band on the foot. Aromas from the cigar included sweet bread and mildly spicy wood. From the foot, I could pick up on distinct sweet raisin, tobacco and hay. 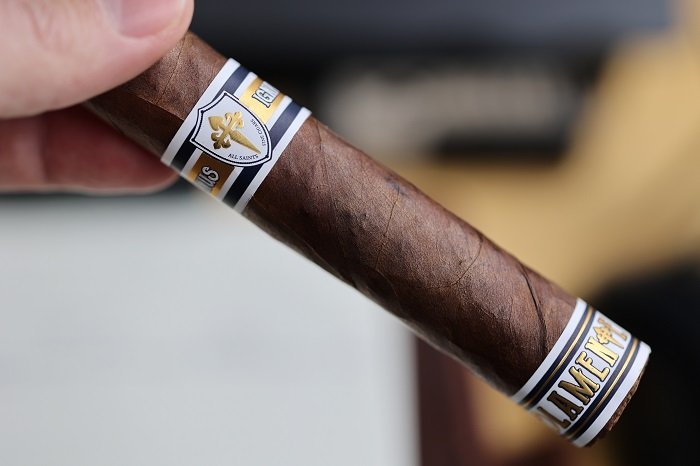 Aaron: The cigar begins with toasted wood and a slightly dull cinnamon. At a quarter inch in, a light creaminess joins the profile. At three quarters of an inch in, some mustiness joins in and the profile is now toasted wood up front, with a mix of mustiness and creaminess in the middle and a dull cinnamon in the background. The retrohale is toasted and musty wood. At an inch and a quarter, the creaminess drops out of the profile as the mustiness becomes even with the toasted wood. The strength in this third was slightly below medium.
Seth: The cigar begins by producing rich earth and cocoa notes. There are spice notes as well, and there is some sweetness with sharp red pepper. I am picking up faint cream qualities on the finish, and it is smoking at a medium to medium-full level for strength and body.
John: The first third presents with powdered cocoa, hay and wood. From there it finishes with a tannic wood that lingers for a fair amount of time in the post draw. A honey and vegetal combo make up the retrohale. As the cigar progresses, cocoa moves to the front of the profile around the 25 minute mark. 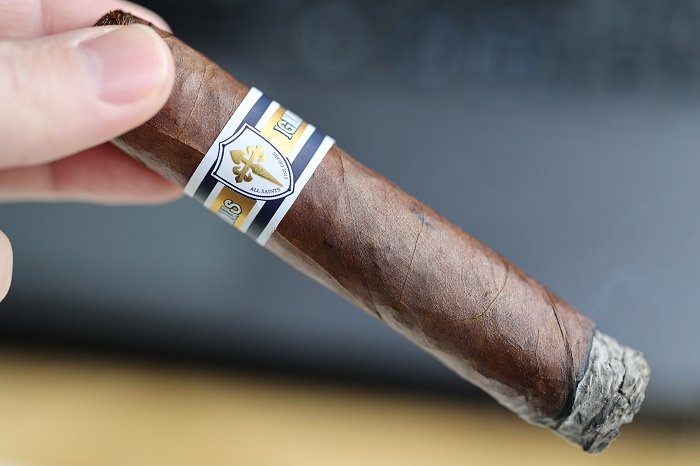 Aaron: As the second third begins, the light, dull cinnamon transitions to a light, dull general baking spice. The retrohale remains toasted and musty wood. As the third comes to a close, the cigar has maintained the profile of musty, toasted wood with light, dull baking spice in the background. The strength in this third remains at slightly below medium.
Seth: The second third delivers a nice earth, coffee, cocoa and raisin quality. There are spice notes present as well, touches of pepper, and I am picking up some leather and meaty qualities. The finish is strong, and I would classify the cigar as being medium-full in strength and body.
John: Cocoa is still at the front of the profile by the time the cigar reaches the second third. Wood has moved into the center, and is still present through the post draw. As the cigar settles in here, wood takes on some dryness on the palate. By the halfway point, the profile is wood forward. 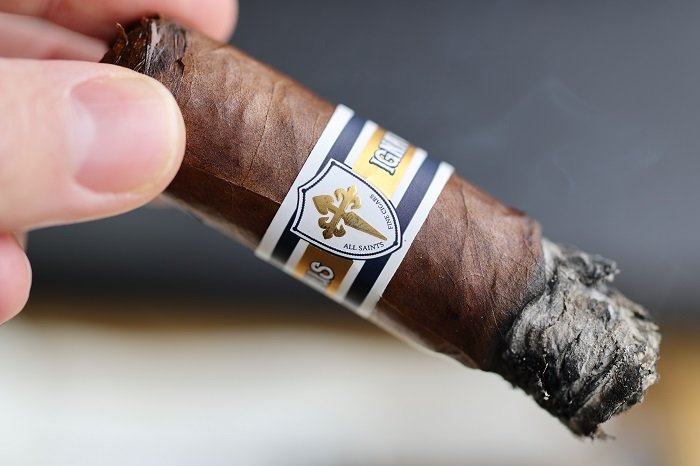 Aaron: The final third continues on with the profile from the second. At a quarter inch in, the toast level increases a bit and the wood becomes more defined as cedar. The retrohale remains toasted and musty wood. The cigar wraps up with heavily toasted and musty cedar with mild baking spice in the background. The strength in this third bumped up to medium.
Seth: The final third delivers a profile of rich earth, damp wood and mineral notes. I am picking up some black pepper qualities as well, and it has a slightly rough finish. I would classify the cigar as a solid medium-full, maybe even full for strength and body.
John: The cigar is still wood forward migrating into the last third. The center is a combination of hay and dry wood, which carries into the finish. Some toasted wood joins the center as the cigar progresses. Some time later, chocolate returns to the center of the profile to add some needed complexity. 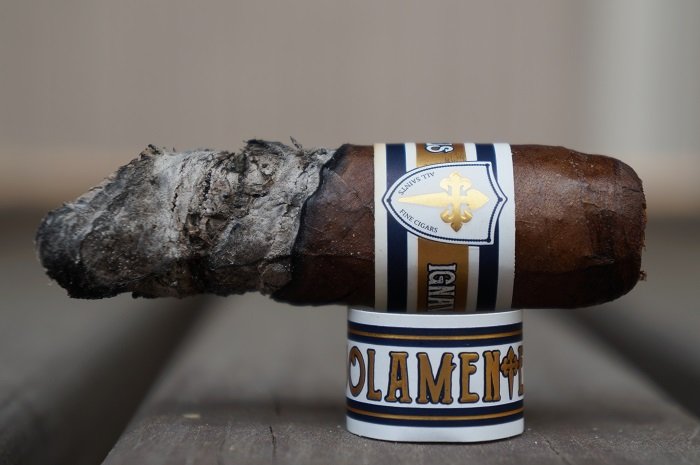 Aaron: The cigar was wavy throughout. The cigar went out once in each third and also required a single touch-up to keep things in line.
Seth: Good burn throughout.
John: The burn was slightly uneven to start, but evened out without intervention. The burn had a mild canoe in the second third, which corrected itself. 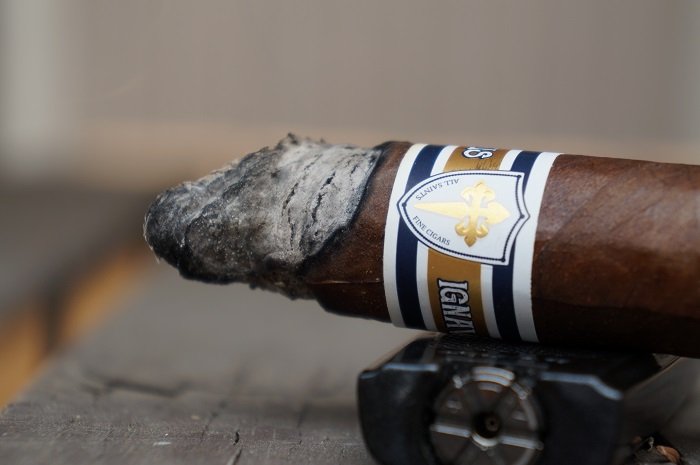 Aaron: The draw was fairly loose, which I had expected with how light the cigar felt. A loose draw on a large ring gauge cigar seems to compound the effect for me and it may have had some effect on the burn.
Seth: Solid draw from start to finish.
John: The draw was in the ideal zone between resistant and open.

Aaron: The cigar started well, with a profile of toasted wood, cinnamon, creaminess and mustiness. By the second third, the profile had pared down to musty toasted wood and light baking spice and was average the rest of the way. Construction was a bit of an issue for the cigar due to the loose draw and burn issues. Overall, the All Saints Solamente was fairly average. After the first third, the profile was just too basic to be all that interesting. I did like this cigar better than the Dedicación and I’m looking forward to trying the new cigars the company launches this year.
Seth: I have not smoked a lot of All Saints, but I have sampled throughout their portfolio. This All Saints Solamente is the best All Saints I have smoked, but I was not a fan of the size. I really wonder how they ended up with this vitola. The second third was really enjoyable, and the build up to that from the first third was really nice, but the finish was lacking. Decent burn and construction. I was not aware that this was a limited release when I smoked it, and while I could knock it for not being a mind-blowing limited release, All Saints is not the only one in that boat. They are one of the few though that has a decent price on their limited release.
John: The All Saints Solamente was a pleasant review experience, with the largest range of flavors delivering in the first third. The second and last third were largely defined by a wood profile. The draw and burn were flawless. Overall, this is something I could see myself returning to, as the cigar was fairly medium-minus in terms of strength, but I’d like to see more flavor delivery in at least the second third. Total smoking time was 1 hour and 31 minutes.