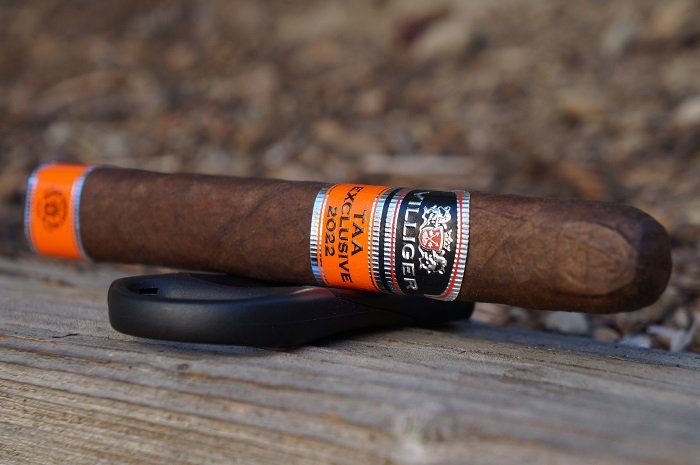 Aaron: The Villiger TAA 2022 has a rectangle press with a wrapper that is medium brown with a network of lightly raised veins. The seams are smooth and the caps well applied. There are two bands, with the primary being the traditional design for the company with the lower half being orange for this release. The foot band is orange and silver and has the TAA logo on it. The aroma from the wrapper is a mellow mix of wood, earth and cocoa while the foot brings cedar, tobacco sweetness and mild spice. The pre-light draw brings a cotton candy like sweetness along with cedar.
Seth: The orange and silver bands made me think of a Rocky Patel whenever I saw this cigar. The fact that is was Mexican San Andres and pressed did the same. Decent looking maduro with pronounced bands. The Villiger TAA 2022 has a light maduro coloring, and it has this coffee with cream coloring. Aromas of nuts, earth, wood, coffee beans and chocolate.
John: The Villiger TAA 2022 comes in cellophane and has a UPC sticker that tears in half when the cellophane is opened. The cigar is double banded, with the primary band giving the appearance of a double band, and the secondary foot band featuring the TAA logo. Additionally, the cigar is box pressed. For aromas, I was picking up on sweet earth and tobacco, with a barnyard and old wood combining as background notes. The foot had aromas of sweet prune and tobacco.
Jiunn: The Villiger TAA 2022 has a Colorado Maduro wrapper shade, reminiscent of roasted coffee beans. Veins are well pressed, seams tight, bunch and roll even and head well capped. Aromas from the wrapper tell pungent dry red pepper spice, followed by hay. Aromas from the wrapper give the same pungent spice, barnyard and cedar. Cold draw tells dry red pepper spice on the tip of the tongue, hay and cedar. 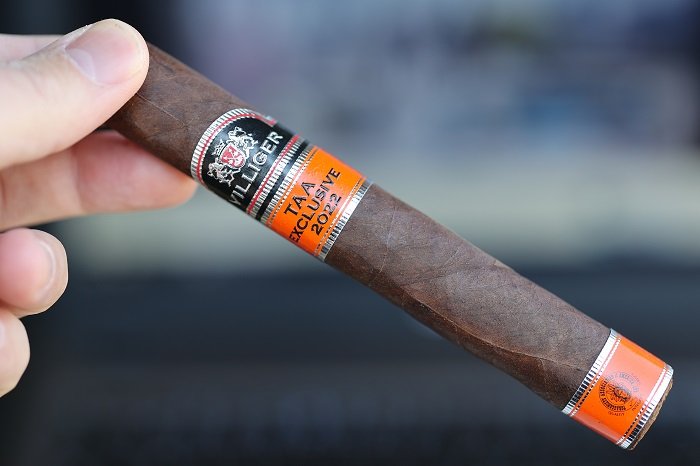 Aaron: The cigar begins with lightly toasted oak and a potent creamy black pepper. At a half inch, the creamy black pepper mellows and a light cinnamon note joins in. The retrohale is toasted oak and mild black pepper. At an inch and a quarter, the cinnamon note has gone away. As the third comes to a close, the profile is toasted oak up front with creamy black pepper just behind. The strength was slightly above medium.
Seth: The first third starts out with this mineral and earthy quality that is paired with some mocha, wood, nuts and pepper flavors. Medium to medium-full in strength and body.
John: The initial flavors here are a smoky earth and tobacco combination as earth lingers through the post draw. Creamy earth and wood settle right into the retrohale. As the first third continues, light plus strength spices break through the retrohale, and linger into the post draw. I’m picking up a sweet raisin background note some time later. As it starts to settle in, the spices have picked up on the post draw to medium strength and linger on my lips. All the flavors seem to find a balance by the 20 minute mark.
Jiunn: The first third starts with undeniably the La Zona style dry red pepper spice pop. There’s also a star anise-like spice component as well. In conjunction to these spices, meatiness, barnyard, naturally sweet and creamy roasted nuts. Retrohales show dry red pepper spice and associated heat. The finish has the red pepper spice on the tip of the tongue and rear palate, and roasted mixed nuts. Strength is medium-full, and body is medium. 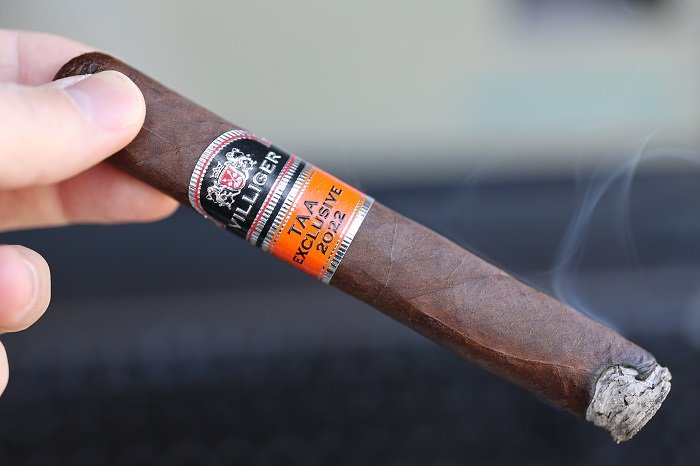 Aaron: As the second third begins, the cigar now has a light meatiness to it. The retrohale is now toasted oak, black pepper and some meatiness. At an inch and a quarter, the meatiness has departed and the toasted oak has become a bit dry. As the third comes to a close, the dry, toasted oak now carries a light wood bitterness with it and the black pepper is a bit behind and lost the creaminess. The strength has dropped to medium.
Seth: The second third is fairly in line with the first third. I am picking up those strong mineral earth notes that are paird with some nutty, wood, mocha and pepper qualities. Medium-full in strength and body.
John: Baking spices lead off with secondary flavors of wood, earth and creaminess. Creamy wood and spices combine on the post draw. The middle of the profile is a robust combination of mild leather and earth, along with sweet spices. The flavors here are quite balanced, with no specific flavor running roughshod over the profile. Approaching the halfway point, a dry earth develops on the finish.
Jiunn: The second third accentuates the gaminess/meatiness and red pepper spice of the cigar. But it’s also important to note the softer side of sweet and creamy roasted nuts is not lost at all. Strength and body remains medium-full and medium, respectively. 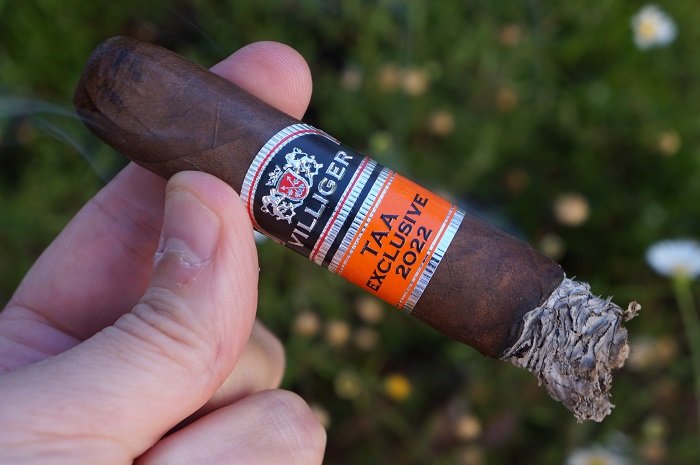 Aaron: As the final third begins, the wood bitterness picks up a bit. At a half inch in, a light vegetal note joins in. The retrohale is now toasted oak and light black pepper and vegetal notes. As the cigar comes to a close, the profile is toasted oak and some wood bitterness up front with black pepper and a vegetal note a bit behind. The strength bumped back up to slightly above medium.
Seth: The final third is slightly earthier and harsher than the second third, but for the most part identical. Earth, minerals, pepper, mocha, nuts and wood. Medim-full in strength and body.
John: Things start with a cinnamon forward baking spice and earth combination, as dry wood and earth take root in the center of the profile. As the last third continues, the earth moves up to medium strength. Not long after, chocolate is present just under the earth flavors.
Jiunn: The final third’s flavor profile brings it down a notch. Less fullness within the same flavors, but no signs of any harshness or sharpness. Strength is making its way to full but I still tag it as overall medium-full. Body finishes the same medium. 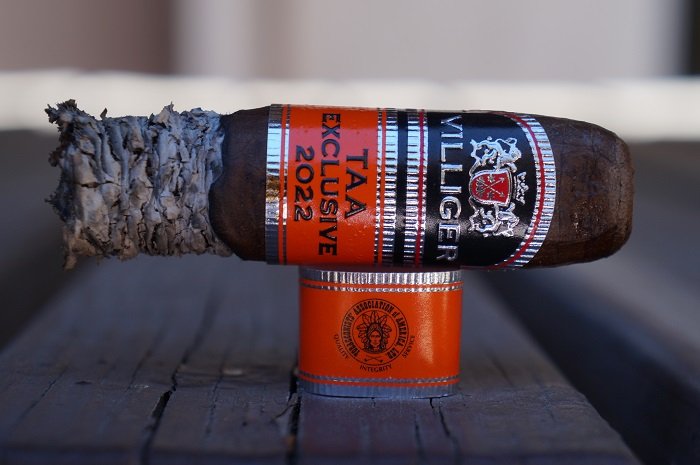 Aaron: The burn was a bit wavy through the first third and then straight the rest of the way. The ash held on in inch and half increments.
Seth: Average burn. Problems here and there.
John: The burn was slightly uneven in the first third, with a section of wrapper not burning. Eventually it required a touch-up. In the second third, there was a section of wrapper not burning again, but it self corrected. No issues through the last third.
Jiunn: The only issue with the burn was the wrapper’s performance. Not a big deal as it only took a couple quick touch-ups. 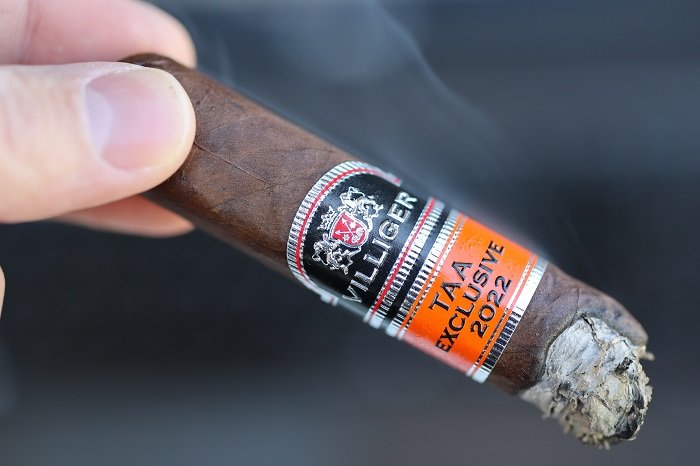 Aaron: The draw was perfect, with just the right amount of resistance that I prefer.
Seth: Good draw throughout.
John: The draw was into the resistant spectrum, roughly 2-1/3 to 3 notches.
Jiunn: The draw was slightly tight. Not a major deal, but it is just shy of perfection.

Aaron: The cigar began with lightly toasted oak and a potent creamy black pepper. Some cinnamon joined for a bit and then went away. The second third saw a light meatiness join for a little bit and the oak became a bit dry and gained some light wood bitterness. The final third saw a vegetal note join in. The Villiger TAA 2022 started well, but as the meatiness departed and the profile became a bit dry, the profile dropped down a level and maintained that the rest of the way. I was glad to see another cigar coming out of La Zona, but it just couldn’t maintain it’s flavor profile throughout the smoking experience. I probably don’t see myself coming back to this one.
Seth: This Villiger TAA 2022 is an average cigar with a great price. There was a lack of complexity and depth with the flavor profile, and the burn was off throughout. Perhaps that is why it is priced so well? Consistent from cigar to cigar, the cigar produced this mineral, earth, pepper and mocha quality. I thought the earth notes were too heavy, but there may be some that really dig the flavor profile delivered. With this being a TAA, I can see this being availble for a while. I know I smoked my share of them for this review.
John: The Villiger TAA 2022 offered up complex, engaging and thoroughly balanced flavors through the first and second thirds. The last third was still pleasant, but not quite up to the same levels as the rest of the cigar. The draw had some resistance to it, and the burn was quite good with a single touch-up required to correct the burn. This is a solid TAA offering from Villiger and I would happily smoke this again. Total smoking time was a relaxed 2 hours and 25 minutes.
Jiunn: More of these TAA releases please. These in the sense of a good blended cigar using good tobacco. Not in the sense of collaborating with other brands per se. This Villiger TAA 2022 is all about the expected goodness of a Hector Alfonso blended cigar. Punchy, yet flavorful and balanced. Well done.