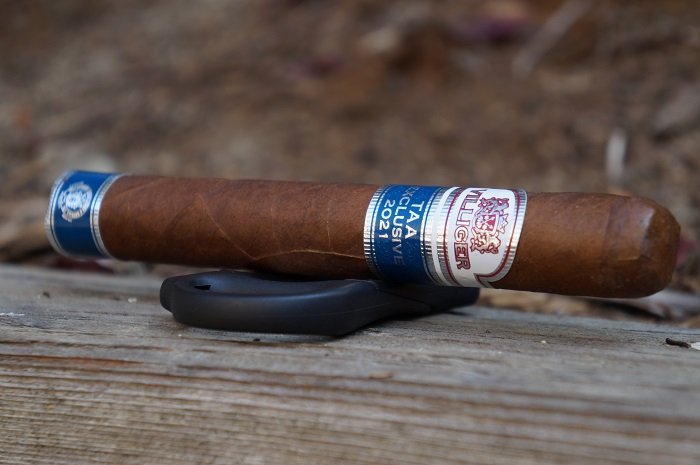 Aaron: The wrapper on the Villiger TAA 2021 Exclusive is medium brown and has a couple of decently raised veins present The seams are very smooth and the caps are applied well. There are two bands, with the primary being the traditional, newer design for the company and carrying a white, red, silver and blue color combination and denoting the company and line. The foot band is blue and silver and has the TAA logo. The aroma from the wrapper is wood and light earth while the foot brings wood and stone fruit sweetness. The pre-light draw brings a lightly musty and airy cedar along with a mild spiciness on my lips.
Seth: Nice looking cigar with a classic Colorado wrapper. Great little bit of tooth with small to medium sized veins. The Villiger TAA 2021 Exclusive has that classic dried tobacco appearance and coloring. Aroma of earth, tobacco, dark spices, coffee beans and raisins. 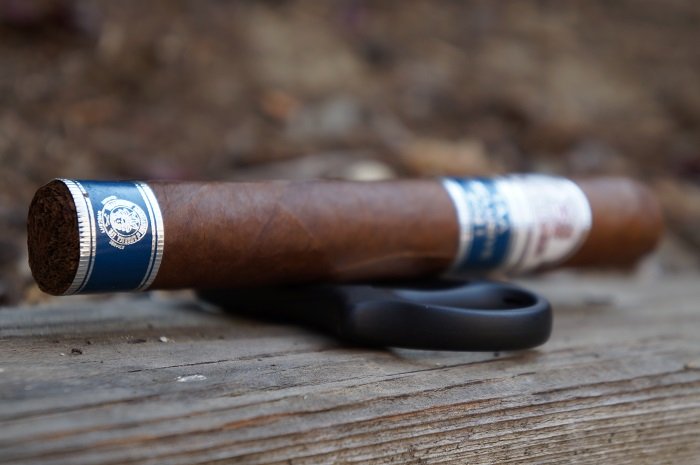 Aaron: The cigar begins with musty and light creamy cedar along with a mid-level baking spice. At a half inch in, a light chalkiness joins the profile. The retrohale is lightly musty and chalky wood. At an inch in, the baking spice has mellowed a bit while the musty and creamy cedar has become a bit fuller. As the third comes to a close, the baking spice picks back up to its previous level. The strength in this third was slightly below medium.
Seth: The first third starts out with soft wood, cream, hay and spices. There are some cinnamon and red pepper notes as well, and the finish is that of coffee and graham crackers. Nice medium body and strength cigar. 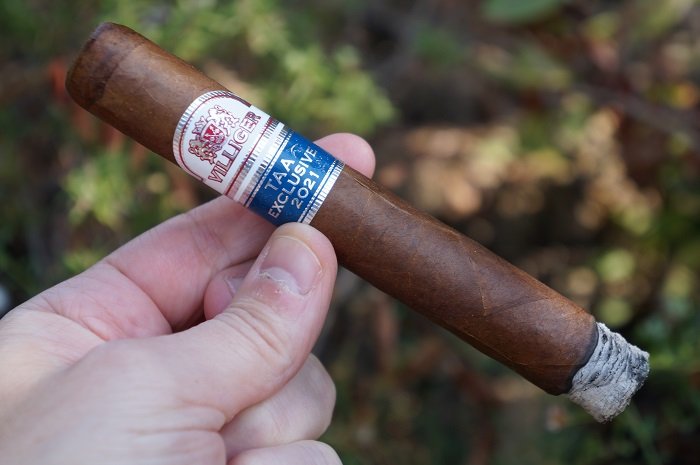 Aaron: As the second third begins, the cedar gains a light toastiness. At a half inch in, the toast level increases as the creaminess has departed. The retrohale is musty, toasted wood. As the third comes to a close, the toast level is fairly heavy as the cedar maintains the mustiness and chalkiness while the baking spice is now in the background. The strength in this third bumped up to medium.
Seth: I am in the second third now and finding the flavor profile to be somewhat in line with the first third. I am picking up herbal and hay notes, and they are paired with leather and dry wood qualities. I am picking up a lot of spice as well, and the finish has some nutty qualities to it. In terms of strength and body, I would classify the cigar as just below medium-full. 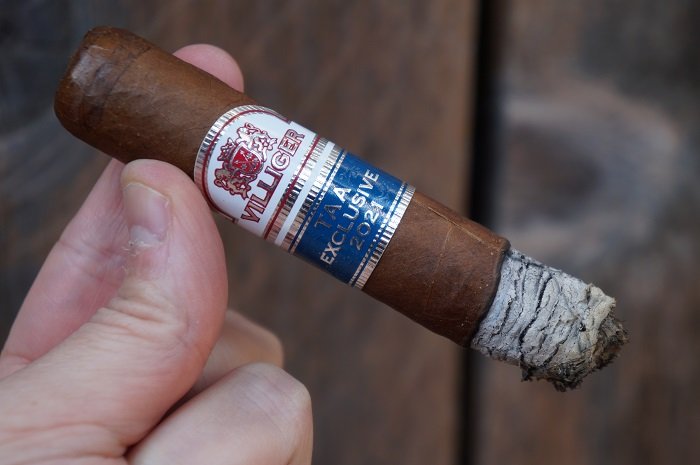 Aaron: The final third continues with the musty, chalky, heavily toasted cedar while the baking spice is no longer detectable. The retrohale remains musty, toasted wood. The cigar wraps up with the profile of musty, chalky, heavily toasted cedar. The strength remained at medium.
Seth: The final third was really a continuation of the first and second third. I am picking up some nice hay, cedar and barnyard notes. There are some wood and pepper spice notes present as well, and the finish has this soft cream and coffee flavor profile. Like the first third, medium in strength and body. 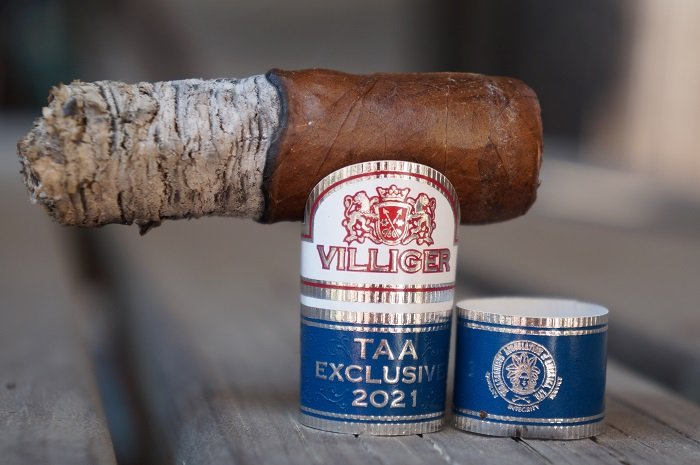 Aaron: The burn was perfectly straight throughout. The ash held on in inch and a half increments.
Seth: Great burn throughout. 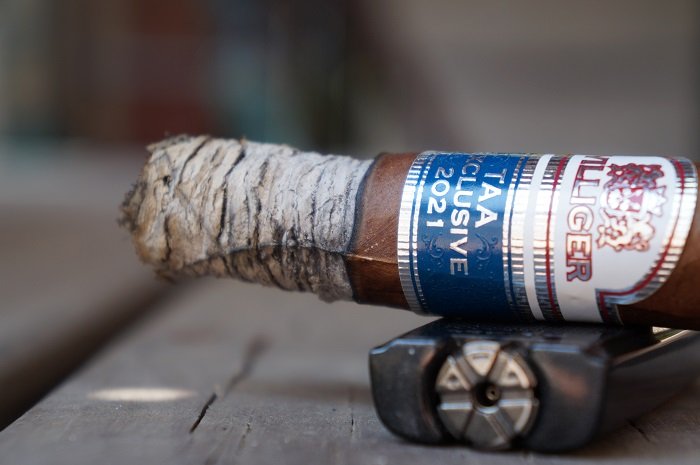 Aaron: The draw was perfect, with just the right amount of resistance that I prefer.
Seth: Nice draw throughout. At times it seemed loose though.

Aaron: The cigar began with musty and light creamy cedar and baking spice. As it progressed, some chalkiness joined in as the creaminess and baking spice faded out at various points and the cedar gained an increasing toastiness as it went along. Construction was perfect. Overall, the flavor profile of the Villiger TAA 2021 Exclusive was fairly average. The cigar never really brought an interesting flavor profile, just one that is easily found in many cigars. Not something I really see myself coming back to.
Seth: The Villiger TAA 2021 Exclusive is an average blend. It is not bad, but I don’t think it is right for TAA. I think TAA releases need to be special, so the blends need to be better and the prices higher. I think this would be a better TAA shop blend. A blend you can only get at TAA stores, but you can get year round. I would love to smoke the blend with a different wrapper too. For some reason I think the blend would pop with a Connecticut or even something more rich. It needs something else.