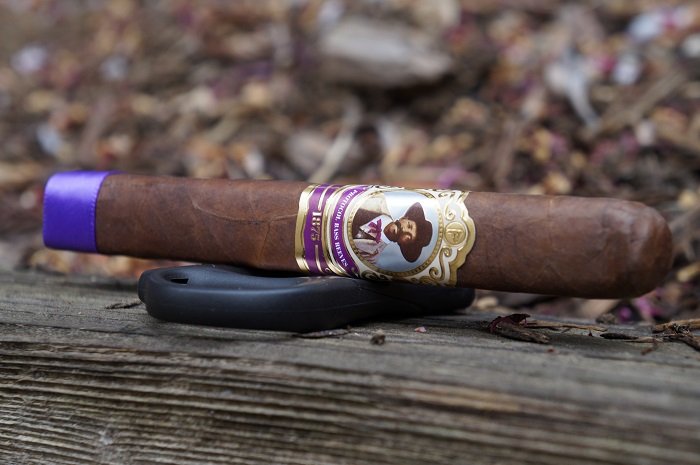 Aaron: The Protocol Bass Reeves Maduro is box pressed and has a medium brown wrapper with some light marbling. The veins are well pressed, seams slightly raised and caps well applied. There are three bands, with the primary and secondary overlapping each other as the previous offerings in the Lawmen Series have done. The color combination is gold, cream and purple, has an image of Bass Reeves on the top band and the year 1875 on the sub band. The foot ribbon is purple. The aroma from the wrapper is wood and damp earth while the foot brings wood, earth and mild spice. The pre-light draw brings a lightly musty cedar.
Seth: I like the purple. The Protocol Bass Reeves Maduro is a nicely pressed cigar that is smooth in texture. Medium sized veins throughout. Coloring is that of a soft maduro, and I would say it has a soft milk chocolate coloring. Firm throughout. Nicely constructed. Aromas of strong spices, rich earth, damp wood and raisins. Chocolate qualiteis as well.
John: The Protocol Bass Reeves Maduro comes in cellophane and does not have a UPC sticker. The cigar has a primary band with another band stacked underneath, along with a royal blue foot band indicating that it’s the Maduro version. Additionally, the cigar has an artisanal complication of being box pressed. Aromas from the wrapper were sweet bread and wood. From the foot, sweet tobacco that mixes with hay.
Jiunn: The Protocol Bass Reeves Maduro is far more Colorado Maduro than Maduro wrapper shade. Veins are well pressed, seams tight, bunch and roll even and head well wrapped. Aromas from the wrapper tell rich, sweet nuttiness and a hint of barnyard. Aromas from the foot give white pepper and rich nuttiness. Cold draws gives cedar shavings, white pepper and hay. 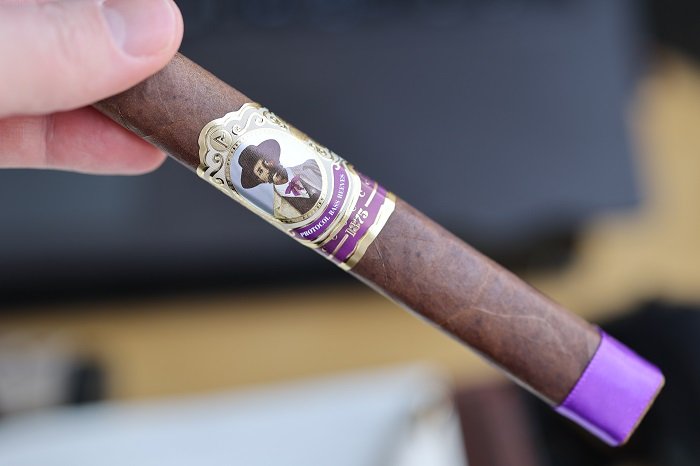 Aaron: The cigar begins with oak, dark earth and baking spice. At a half inch in, a light mustiness joins and the baking spice morphs into a punchy black pepper that comes on at the end of the draw with a long finish. The retrohale is musty oak and zinging black pepper. At an inch and a quarter, the dark earth is now even with the lightly musty oak up front. As the third comes to a close, the profile is musty oak and dark earth up front with black pepper a bit behind, The strength was slightly above medium.
Seth: The first third begins by delivering strong earth and pepper spice notes. I am getting faint cocoa powder qualities and espresso bean qualities, but it is mostly earth and pepper. Full in strength and body.
John: The first few puffs bring mildly tannic wood, medium strength baking spices, and a combination of dry wood and spices into the post draw. A strong espresso and mild chocolate take up the retrohale right off the start. Pepper joins the baking spices at medium-full and linger all the way in-between draws on the roof of my mouth. As the first third progresses, chocolate moves up to medium strength as the coffee moves down to light or light plus.
Jiunn: The first third gives off first and foremost all kinds of spices and minerals. Baking spices, celery seeds, white pepper spice and graphite minerals galore. Within all the spices, there’s also a softer side of sweet and creamy roasted nuts. Retrohaling gives nostril scorching white pepper, but also gives some nice tart cherries. The finish is incredibly long, with minerals. Strength is medium-full, body is medium. 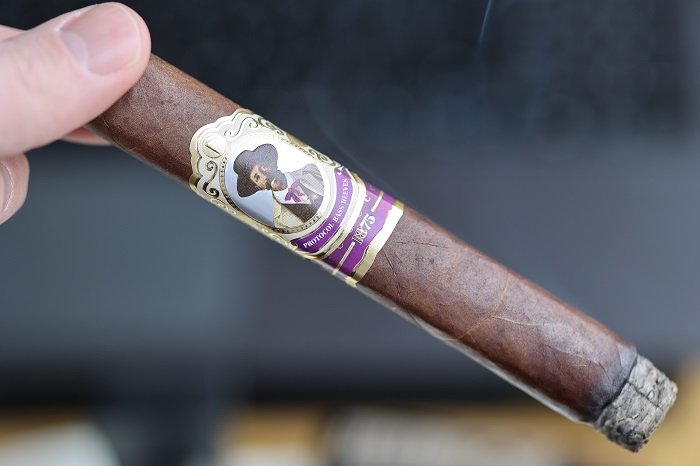 Aaron: As the second third begins, the earth becomes a bit dry. At a half inch in, the black pepper has again become a bit punchy. The retrohale is now musty oak and dry earth. At an inch and a quarter, the black pepper has mellowed back down. As the third comes to a close, the profile is musty oak and dry earth up front with black pepper a bit behind. The strength remains at slightly above medium.
Seth: The second third really went downhill. Lots of red pepper and dry earth notes. Coffee beans as well. Feels like I have rocks, dirt and pepper in my mouth. Full in strength and body.
John: The second third gets going with chocolate and creamy spices. Wood moves into the center and in the post draw as it settles in. Approaching the halfway mark, bread returns to the retrohale. Some earthiness comes through on the end of the draw in the bottom half.
Jiunn: The second third calms down and smooths out the flavors. It’s now more balanced, but still highlighting the various spices, minerals and softness of roasted nuts. Strength and body remains medium-full and medium, respectively. 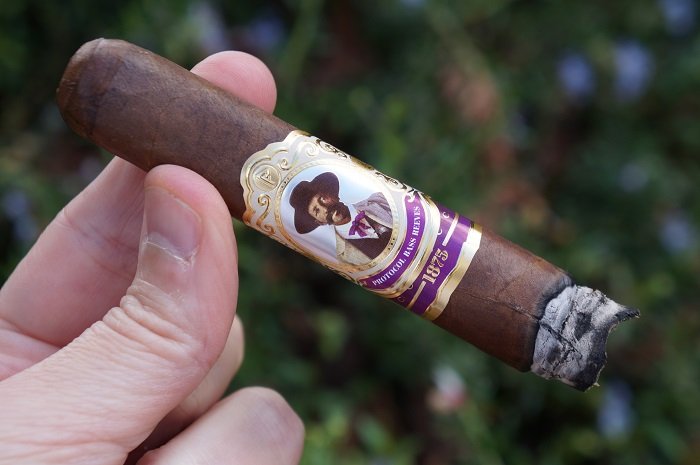 Aaron: As the final third begins, the mustiness increases a bit. The retrohale remains musty oak and dry earth. At an inch in, the black pepper has become very mild. The cigar wraps up with an even mix of musty oak and dry earth with very faint black pepper in the background. The strength remained at slightly above medium.
Seth: The final third is in line with that of the second third and I am getting lots of pepper, dry earth and mineral qualities. There is very little to the cigar, and what is present is far from pleasant and enjoyable. There is no complexity, depth or balance. Full in strength and body.
John: Earth, mild spices and bread combine here as earth and wood pair into the post draw. As it progresses, the profile becomes wood forward with earth providing an accent.
Jiunn: The final third loses out on some complexities. Namely, the softness of the sweet and creamy roasted nuts is gone, leaving me with minerals and spices. Strength and body is unchanged at medium-full and medium. 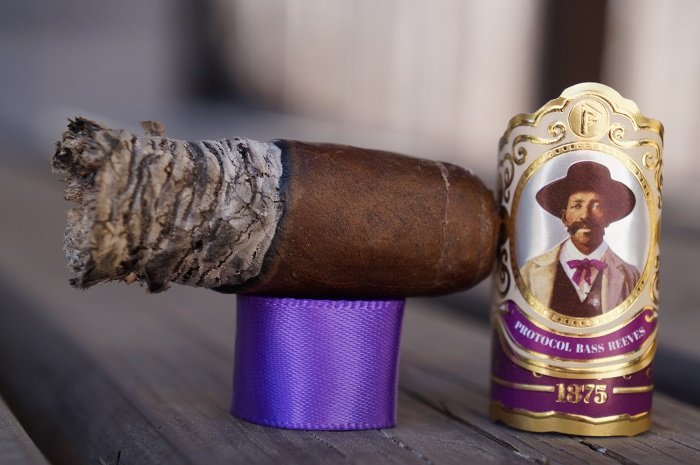 Aaron: The burn was a bit wavy at times, but never needed any attention. The ash held on in inch and a quarter increments.
Seth: Amazing burn from start to finish.
John: The burn was straight through the review, with an ash that was over an inch at times before I would tap it off.
Jiunn: Aside from a couple touch-ups and a random complete re-light, no issues with the burn. Overall, no material issues. 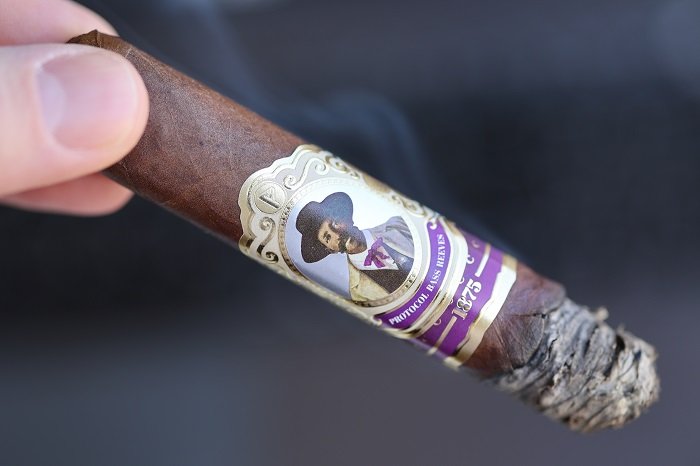 Aaron: The cigar began with oak, dark earth and baking spice. Some mustiness joined a bit later and the baking spice morphed into black pepper. The second third saw the earth become dry. The final third saw the pepper become very mellow. The Protocol Bass Reeves Maduro started with a decent flavor combination but as the earth dried out in the second third, it dropped the enjoyment level down a notch and maintained that level the rest of the way. In comparison to the Natural, this cigar was a bit better as the final third finished a notch above. I still don’t see myself coming back to this all that often, but I would choose the Maduro between the two.
Seth: I was not pleased with the Protocol Bass Reeves Maduro. This was a rough blend. The first third started out with some pronounced flavors that were paired with a lot of strength and body, but as the cigar progressed, the flavors fell to the wayside. The last two thirds were a cigar that had strength and body, but very little flavors. Rough earth throughout. Full in strength and body. No thank you.
John: The Protocol Bass Reeves Maduro delivered a palate intense experience in the first third that fortunately softened in the second third while still maintaining complexity and my engagement. The last third was fairly linear with a mostly wood forward profile, but overall this was a good cigar that I would happily smoke again. Having reviewed the Natural and the Maduro, I gravitate towards the Maduro and it isn’t even a contest. The draw and burn were flawless through the review. Total smoking time was 1 hour and 57 minutes.
Jiunn: I think this Protocol Bass Reeves Maduro is very well the first Protocol Lawmen Series that I truly enjoyed. I loved how the profile showcased La Zona style spices, but enough softer notes to not make it unbalanced with spice and minerals. No doubt, one that I would come back to again and again.