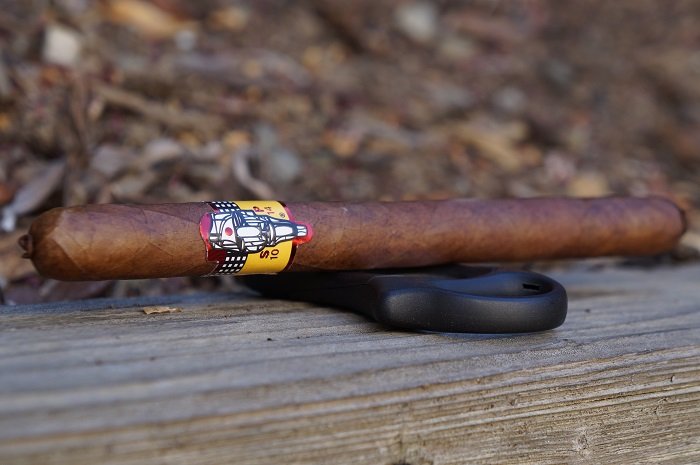 Aaron: The wrapper on the SP1014 Love n’ Passion 740 is light brown with some raised veins and a dense network of fine veins with all of the veins carrying a slightly darker color which makes for an interesting design. The seams are smooth, cap finished off with a small, tightly wound pigtail and the foot covered with folded over wrapper. The band is yellow, black, white and red and has a cartoonish old Cuban Cohiba design to it with a face and the line name in front and the names of the owner and the blender on the back. The aroma from the wrapper and closed foot are both a slight damp wood and earth combination. The pre-light draw brings a slightly sweet, aged cedar.
Seth: The SP1014 Love n’ Passion 740 is a nice looking lancero. There’s something about the band that I really enjoy. The wrapper itself has a nice Colorado coloring, and there are veins that are small to medium in size throughout. The cigar is firm in hand, and there is a bit of fine grit present to the cigar. Aromas of sweet, sugary cinnamon spice with bits of tobacco, leather and earth are present on the wrapper and foot. Quite lovely.
John: The SP1014 Love n’ Passion 740 comes without cellophane and does not have a UPC sticker. The cigar is single banded and for artisanal complications it has a curly tail cap, along with a closed foot. Aromas from the cigar included dry wood, mild moss, earth and hay. All I could pick up from the closed foot was indistinct sweetness.
Jiunn: The SP1014 Love n’ Passion 740 wrapper is incredibly fragile. I already see a couple tears above the band and the middle of the cigar. The bunch and roll however feels good, being evenly packed. Aromas from the wrapper give flowers and cedar. Aromas from the enclosed foot give the same but with added white pepper spice. Cold draws give cedar shavings. 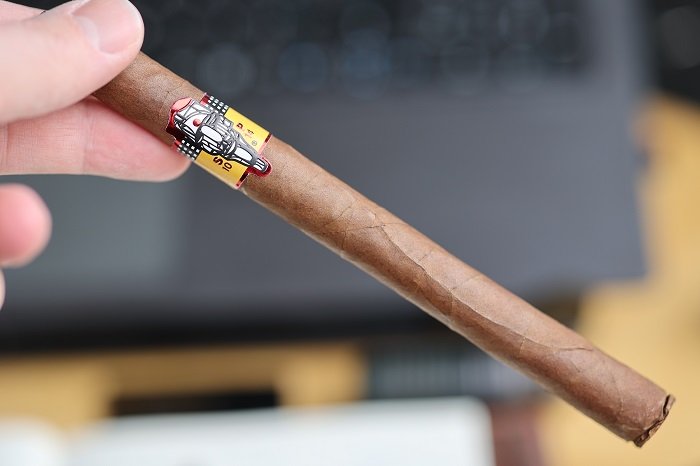 Aaron: The cigar begins with cedar, black pepper, mushroom mustiness and graham cracker. At three quarters of an inch in, the mushroom portion of the mustiness is now very light. The retrohale is toasted cedar, mustiness and light black pepper. At an inch and a quarter, the cedar gains a toast note and the black pepper mellows a bit. As the third comes to a close, the profile is toasted cedar up front, mustiness with a light mushroom note to it slightly behind and then some black pepper and graham cracker a bit behind that. The strength in this third was right at medium.
Seth: The first third has a lovely start. I am picking up some peppery spices that are paired with bits of cedar and coffee beans. There is some sweetness as well, and it has this rock sugar, green, and herbal quality. Medium in strength and body. Spearmint like flavor on the finish.
John: A creamy sweet wood starts the first third, pairing with mild baking spices, and dry wood into the post draw. That wood takes on some sharp tones as it lingers. Chocolate breaks through the retrohale after a few puffs, with muted baking spices not long after. The cigar continues to evolve as roughly five minutes in some strong pepper is present in the retrohale and post draw, approaching habanero peppers. By the fifteen minute mark, sweet graham cracker is present through the retrohale. By the halfway point, the pepper intensity has fallen back down to medium.
Jiunn: The first third is spice laden first, and woodsy next. Good amount of dry red pepper spice and cedar wood. There may be a little roasted nuts but that’s a bit far stretched. Retrohaling gives the true power of the dry red pepper spice, lingering in my nostrils. The finish is quite short, namely cedar. Strength is medium-full, and body is medium. 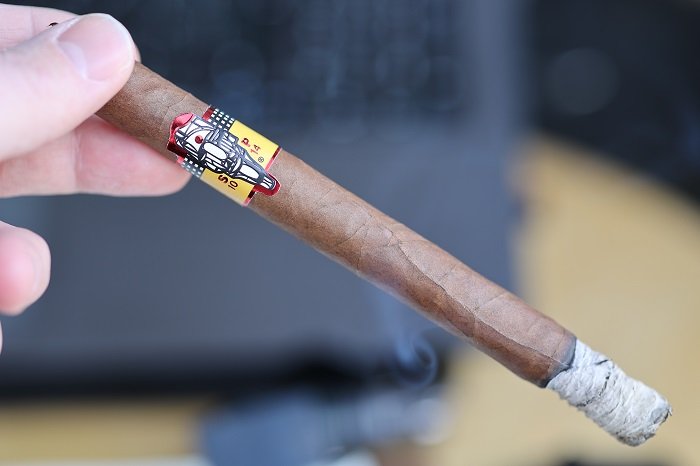 Aaron: As the second third begins, the black pepper becomes very mild. At three quarters of an inch in, the mustiness mellows and the mushroom note has departed while the graham cracker note has also departed. The retrohale is now musty, toasted cedar and mild black pepper. At an inch and a half in, a light, dry earth joins the profile. As the third comes to a close, the profile is musty, toasted cedar with light amounts of dry earth and black pepper. The strength remained at medium.
Seth: The second third delivers a flavor profile of cedar, coffee beans, cream, earth and barnyard qualities. There are still some herbal and green like qualities on the finish, but there is less sweetness now. Medium-full in strength and body.
John: Graham cracker takes the cigar into the second third, with some light-plus strength baking spices and wood to finish. Wood moves into the center of the profile as it settles in. Some acrid notes are present after the re-light, but largely go away after a purge.
Jiunn: Spice levels have slightly tapered down, now highlighting more cedar and introducing metallic minerals. Strength and body is still medium-full and medium, respectively. 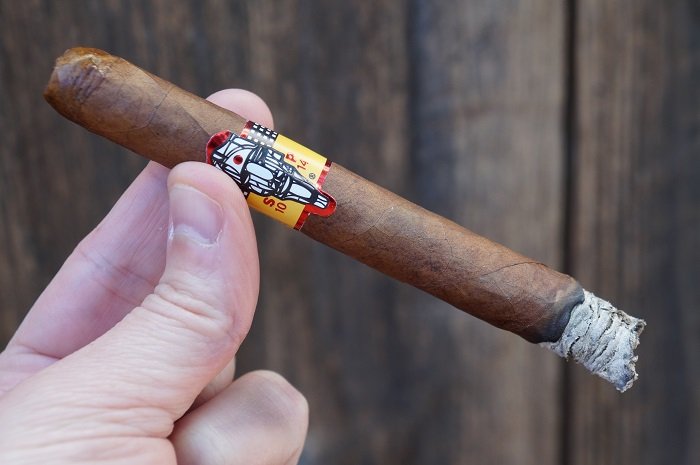 Aaron: The final third continues on with the musty, toasted cedar with light amounts of dry earth and black pepper. The retrohale is now musty, toasted cedar and light, dry earth. The cigar wraps up with the same profile of musty, toasted cedar with light amounts of dry earth and black pepper. The strength remained at medium.
Seth: The final third is fairly similar to that of the second third. I am picking up earth, coffee, cream and cedar notes, and the finish has bits of black pepper as well. Strength and body are still at that medium-full level. Dryer in the final third.
John: There is more graham cracker into the last third, but it’s muted and brings some wood with it. A mildly dry wood is present through the post draw. Some lingering char is present on the post draw as it progresses.
Jiunn: To my surprise, the final third is not a continuation of the second third. This third is more in line with the first third, being definitely cedar driven but not as much of a bite in dry red pepper spice. Strength and body finishes the same medium-full and medium. 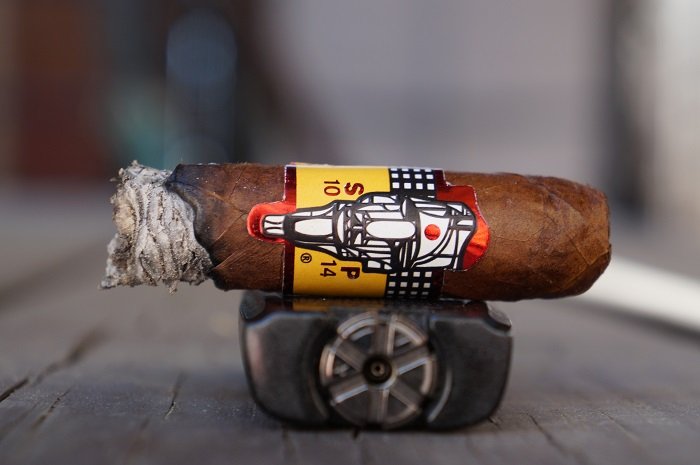 Aaron: The cigar went out four times through the first half of the cigar, requiring re-lights. There were no issues through the second half of the cigar.
Seth: Had to re-light the cigar a couple oftimes, but overall a nice burn.
John: The burn stalled almost immediately, after less than 5 puffs. After a re-light, the burn was straight, with a bright white ash that held on up to 1-1/2 inches at times. The cigar went out again at the halfway point, requiring another re-light. While a closed foot is a very interesting artisanal complication, it often will lock moisture in the filler and cause burn issues.
Jiunn: Burn performance was a bit annoying. Due to the wrapper being already split pre-light, there was a constant battle to touch-up the cigar. The smoke production was also meek, which was another result of the torn wrapper. 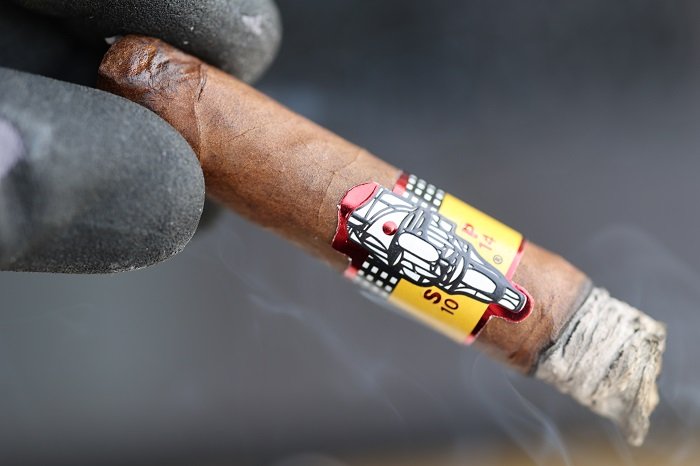 Aaron: The draw was slightly tighter than I prefer, but I don’t think it led to the burn issues.
Seth: Draw was very good from start to finish. Nice level of resistance.
John: The draw had a mild amount of resistance to it, roughly 1-1/2 to 2 notches into the resistant spectrum.
Jiunn: A bit too loose, but I do not believe it hindered the flavor experience.

Aaron: The cigar began with cedar, black pepper, mushroom mustiness and graham cracker. The cedar gained a toast note a bit later. The second third saw the mushroom portion of the mustiness depart as well as the graham cracker note. Some dry earth joined a bit later. There were some burn issues through the first half of the cigar where the re-lights may have played a role in the flavor profile. Overall, the SP1014 Love n’ Passion 740 started well even though the black pepper was a bit out of balance for a bit. The second third saw flavor components depart which lowered the enjoyment level and maintained an average profile the rest of the way. The flavor profile was unique in the first third, which was nice, but as those unique flavors departed, it just wasn’t as interesting. A nice cigar to try and maybe worthwhile trying in another vitola, but as it stands, I wouldn’t see myself coming back to this particular vitola unless the others had a better construction experience that showed a better flavor profile throughout.
Seth: I enjoyed the SP1014 Love n’ Passion 740. I thought this was a really nice Dominican blend that showed strength, body and flavors that you typically don’t get in all Dominican blends. I don’t think it will be everyone’s cup of tea, but those who get behind it will really enjoy it. Very new in what was delivered, and it showed qualities beyond the DR and the blends coming out of the DR. The profile itself was not one that I was expecting from this vitola, and in that case they did a great job. It’s great to come across a lancero that has some kick to it. It is a cigar for a serious cigar smoker in my opinion. A lancero crafted for seasoned smokers who truly appreciate lanceros. I appreciate that.
John: The SP1014 Love n’ Passion 740 had some great high points and some unfortunate low points. The first third was an engaging and intense medley of flavors, with the second third becoming wood forward and linear, and the last third becoming char forward and unpleasant. The draw was almost perfect, and the burn suffered, requiring two re-lights. I have no doubt that the closed foot impacted the burn, which in turn impacted the flavor profile. If these were given a chance to rest for many months, it’s possible the cigar would burn well which I think would result in a much more engaging flavor performance. As it is however, I cannot recommend it. Total smoking time was 2 hours and 3 minutes.
Jiunn: This was an unfortunate experience with the SP1014 Love n’ Passion 740. I believe the fragile wrapper played a significant part of the experience, constantly needing to pay attention and correct the burn, as well as battle with the meek smoke production, which subdued the flavor delivery. I’d like to perhaps try another down the road to see if I get a better experience. For now, I’ll have to see what my teammates thought on the technical performance.