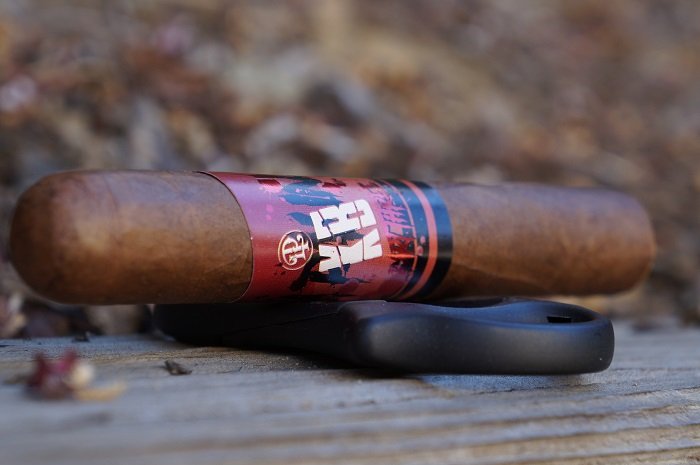 Aaron: The wrapper on the La Palina KB Series Part Three is medium brown, has a fine tooth to it along with raised veins that carry a darker color. The seams are smooth and the caps well applied. The band is various shades of red along with black and white and carries the company and line names. The aroma from the wrapper is light, musty cedar while the foot brings mesquite, milk chocolate and a mild spice. The pre-light draw brings wood and a floral honey sweetness along with a mild spiciness on my lips.
Seth: The La Palina KB Series Part Three has an average wrapper in terms of appearance. Light Natural to light Colorado coloring. Very antique brown. Few oils present. Veins are small and present throughout. Firm throughout with aromas of sweet spices, sweet tobacco, earth and cherries.
John: The La Palina KB Series Part Three comes in cellophane, and has a UPC sticker with the code high enough on it so it doesn’t rip in half when the cellophane is opened. The cigar has a single main band and no artisanal complications. Aromas from the cigar included wood and a subtle sweetness. From the foot, there was hay, mild wood and mustiness.
Jiunn: The La Palina KB Series Part Three has a dull Colorado wrapper shade. Veins are roughly pressed, seams tight, bunch and roll even and head well wrapped. Aromas from the wrapper tell of ample cedar and barnyard. Aromas from the foot give the same with added white pepper spice. Cold draws reveal airy chestnuts and cedar. 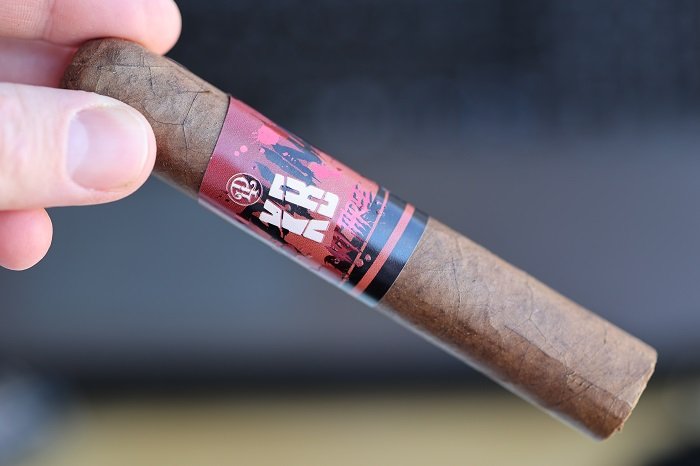 Aaron: The cigar begins with toasted oak with light amounts of earth and cinnamon. At a quarter inch in, the cinnamon is now a general baking spice that is fairly bold, even though it is at the back end of the draw with a long finish. At a half inch in, a faint chalkiness joins the profile. The retrohale is toasted oak, chalkiness and baking spice. At an inch in, the baking spice has mellowed. At an inch and a quarter, the profile is toasted oak up front with chalkiness and earth a bit behind with light baking spice in the background. The strength in this third was right at medium.
Seth: The first third starts out with black pepper, earth and cocoa notes. There are some hay and barnyard qualities with the cigar, and I am picking up lots of espresso bean notes as well. Medium-full in strength and body.
John: The initial puffs have a lot of meaty nuts along with supporting flavors of wood and mild baking spices. Sweet nuts and wood take up the post draw at the start. Some medium baking spices, wood and mild sweetness develop through the retrohale. As the first third progresses, wood picks up in intensity. Some dryness joins the post draw moving towards the halfway point.
Jiunn: The first third’s flavor profile tastes disorganized. Highly cedar and construction paper forward, combined with meatiness/game. Retrohaling gives abundant white pepper and tapered construction paper. The finish is medium in length with cedar and nuts. Strength and body is medium. 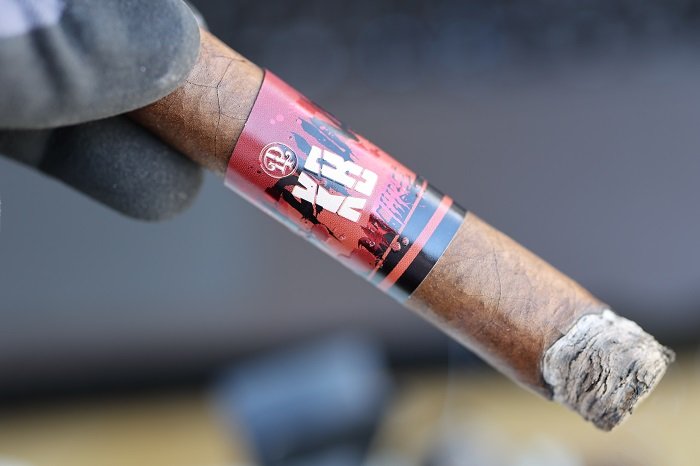 Aaron: As the second third begins, the baking spice is now very mellow. At a half inch in, the earth is now right behind the toasted oak while the chalkiness has mellowed a bit. The retrohale is now toasted oak with light amounts of mustiness and earth. At three quarters of an inch in, the mustiness has now reached the mouth draws and is paired with the toasted oak. At an inch in, the baking spice has departed while the toast level has increased. As the third comes to a close, the profile is musty, toasted oak with earth right behind. The strength bumped up to slightly above medium.
Seth: The second third is fairly in line with that of the first. I am picking up cocoa notes that are paired with black pepper, earth and wood notes. Less hay in this third though, and more wood qualities. Lots of black pepper and espresso bean notes on the finish. Full in strength and body.
John: A clean, wood forward profile here with hay and wood carrying into the post draw. Some light nuts take hold of the center of the profile. As the second third settles in, tannins join the wood. By the halfway point, there has been no more evolution of the flavors.
Jiunn: Mediocrity ensues. It’s still a highly disorganized mix of flavors, being cedar, construction paper and game. The profile is also starting to have a harsh bite to the cedar wood. Strength and body remains medium. 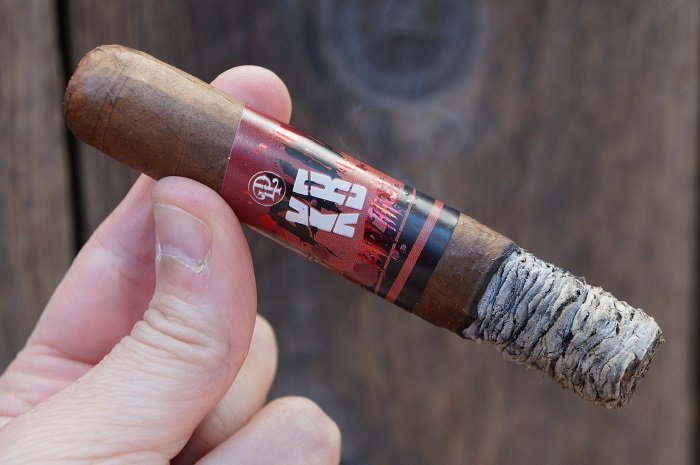 Aaron: The final third continues with the musty, toasted oak with earth right behind. The retrohale is now musty, toasted oak, earth and a light black pepper. At three quarters of an inch, a mild black pepper joins the profile. The cigar wraps up with musty, toasted wood up front, earth right behind and mild black pepper in the background. The strength remained at slightly above medium.
Seth: The final third delivers a flavor profile of earth, cocoa, espresso beans and black pepper. I am getting some faint wood notes, but they are faint. Somewhat down hill compared to the second third. Full in strength and body.
John: Some mildly dry wood carries the cigar into the last third. Mild earth and bitterness develops as it progresses.
Jiunn: Unfortunately, that hint of harsh cedar bite in the second third increased in intensity, making the profile that much more disorganized and downright displeasing. Strength and body finishes the same medium. 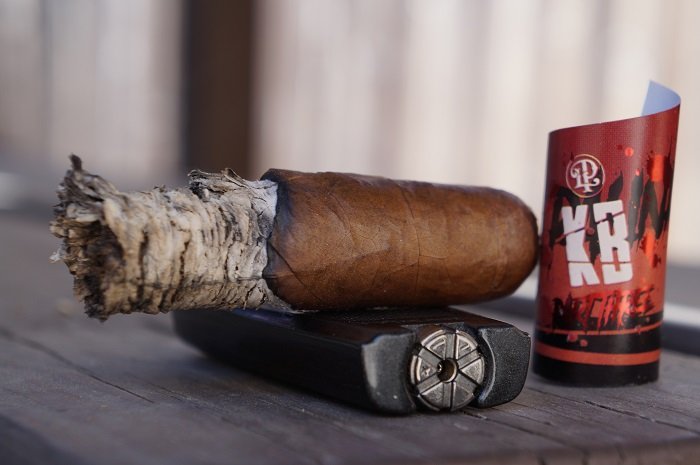 Aaron: The burn was a bit wavy throughout and the cigar went out once in the final third, requiring a re-light. The ash held on in near two inch increments.
Seth: Great burn throughout.
John: The burn line became uneven as it progressed, necessitating a touch-up as a canoe formed at the halfway point of the first third. The cigar canoed again at the halfway point of the second third, requiring another touch-up.
Jiunn: Perfect burn performance. Even burn, tight ashes, solid ashes and cool burning temperature. 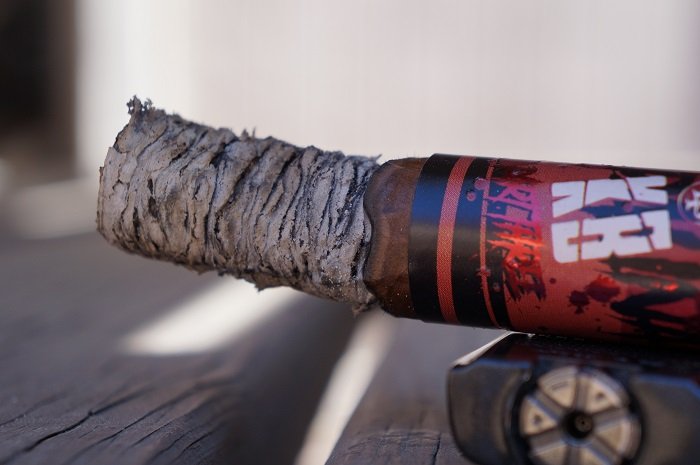 Aaron: The draw was slightly tighter than I prefer, but didn’t cause any issues with the smoking experience.
Seth: Lovely draw from start to finish.
John: The draw was quite good with some mild resistance to it, roughly 1-1/2 to 2 notches into the resistant spectrum.
Jiunn: The draw was also perfect, striking the ideal air flow.

Aaron: The cigar began with toasted oak with light amounts of earth and cinnamon. The cinnamon transitioned to general baking spice fairly quickly and some chalkiness joined a bit later. The second third saw the baking spice depart and the final third saw a mild black pepper join in. The first few draws of the La Palina KB Series Part Three were pretty nice, but it quickly fell to average as the cinnamon became a general baking spice and maintained that level through the rest of the cigar. Overall, it was a pretty mundane cigar with nothing that really got my attention. It’s not a cigar that brought back fond memories of the previous Kill Bill’s and it’s not likely something I’ll return to.
Seth: It has been some time since I smoked a cigar that had a good second third, but average first and final. You just wish there was a little more there at the beginning and the end for the La Palina KB Series Part Three to reach a higher level. I like the increase of strength and body from the first to second third, I thought the flavors were really jamming with that transition as well, but La Palina got too greedy and the final third was too much. The strength and body became too much and knocked the flavors out of the equation. It has been some time since I smoked a Kill Bill, so I would have to see how Part One and Part Two smoke, but I think someone looking for some strength and body would dig Part Three. The new packaging is probably more catchy, especially for the name and the blend, and the price is solid as well. I would be interested in smoking Part Four and seeing what the extra length and rg do to the cigar.
John: The La Palina KB Series Part Three was a fairly linear and paint by numbers flavor experience. I would describe the general profile as pleasant, but it never seemed to elevate the flavors or combination of flavors in a way that was particularly engaging for me. The draw had a mild resistance to it, and the burn required two touch-ups through the review to correct. La Palina makes a number of cigars that I find to be quite good and I would reach for those before another KB Part Three. Total smoking time was 1 hour and 34 minutes.
Jiunn: Disorganized, incohesive and unbalanced are the three words to sum up the overall experience with the La Palina KB Series Part Three. The only redeeming factor was the perfection in burn and draw performance. In no way are the flavors of harsh cedar, construction paper, white pepper, game/meat a combination that I will ever enjoy. I hope Part Four can redeem Part Three.