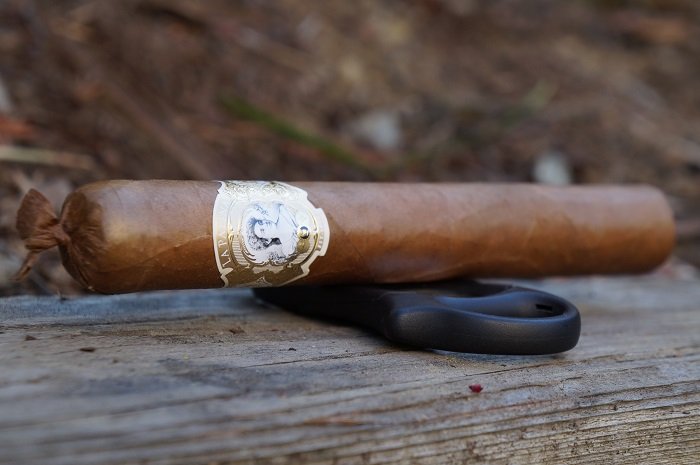 Aaron: The wrapper on the La Palina Goldie Laguito No. 6 is light brown and has a network of lightly raised veins present. The seams are easily visible as they are a bit raised while the head is finished off with a twist that has a large flag of tobacco protruding. For as beefy as this cigar is in size, it is quite light in hand. The band is the traditional design for this line. The aroma from the wrapper is a light hay while the foot brings a mix of cedar and soap. The pre-light draw brings more of the cedar and soap combination along with a mid-level spiciness on my lips.
Seth: The La Palina Goldie Laguito No. 6 is finished with an oily wrapper that is a true Colorado in coloring. There are some light brown and red clay notes throughout. There are small sized veins present as well, and the cigar is firm in hand. It is finished with a fantail cap, and I am picking up aromas of hay, cedar, barnyard, honey and sour fruits.
John: The La Palina Goldie Laguito No. 6 has a golden brown wrapper and a twisted cap. Nosing the cigar, I was able to pick out notes of sweet wood and hay with a faint graham cracker underneath. From the foot, I could pick out hay and some barnyard.
Jiunn: The La Palina Goldie Laguito No. 6 has a light caramel Colorado Claro wrapper shade. Veins are well pressed, seams tight, bunch and roll even and flared head well wrapped. Aromas from the wrapper give faint cedar and hay. Aromas from the foot give cedar and white pepper. Cold draw reveals cedar, sawdust and hay. 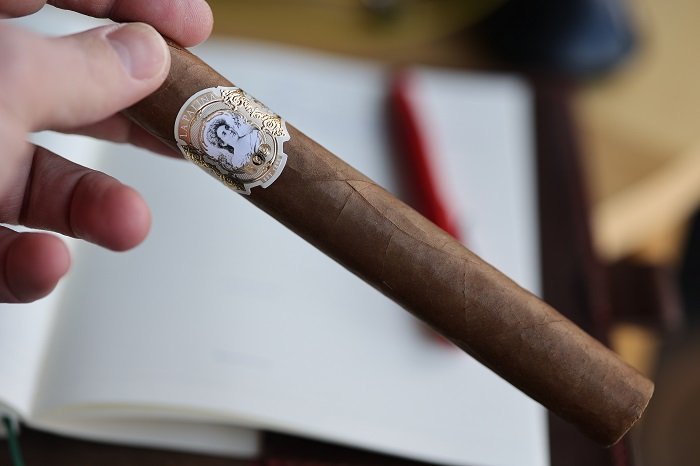 Aaron: The cigar begins with a mix of cedar, soap and baking spice. At a quarter inch in, a burning paper note with slight bitterness has joined the profile. At a half inch in, the burning paper and bitterness are gone as the profile is now toasted cedar with a mix of soap, mustiness and black pepper in the background. The retrohale is musty, toasted cedar. At an inch and a quarter, the soap note is no longer detectable. As the third comes to a close, the profile is musty and toasted cedar along with faint black pepper. The strength in this third was mild-medium.
Seth: The first third begins by delivering these sour fruit and sharp spice notes. There are some dry earth flavors as well, and they are overpowering the cedar, hay and honey notes. It’s really a shame. It is smoking around medium in strength and body, but some dryness and harshness make it seem stronger. There are some burnt paper notes as well.
John: The first third began with notes of chocolate, graham cracker, cinnamon, with a general baking spice and pepper medley moving into the post draw. Some creaminess and wood take up home in the center of the profile. Once the first third has settled in, a mild tannic graham cracker underpins the profile.
Jiunn: The first third has a pretty balanced profile. Flavors of accented white pepper, meatiness and stale roasted nuts. Retrohaling ramps up the white pepper spice as well as gives greater dried nuts. The finish is long and lingering with cedar and dried nuts. Strength is medium plus, body is medium. 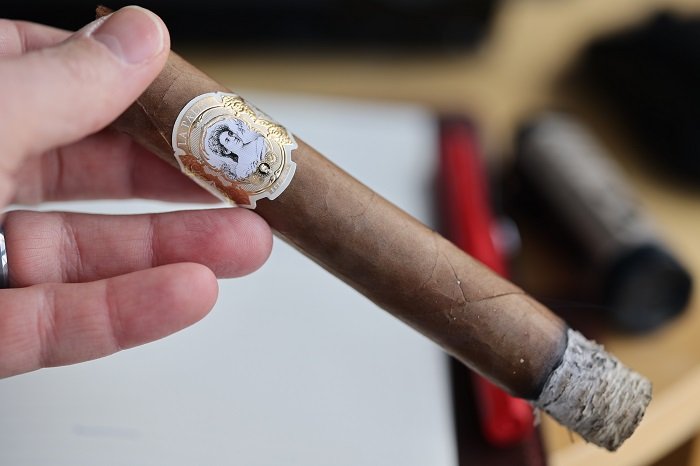 Aaron: As the second third begins, the toast level becomes a bit heavier and some dry earth has joined, creating a slight dryness to the overall profile. At a half inch in, the black pepper has left. The retrohale remains musty, toasted cedar. The third finishes out with the musty, toasted cedar and dry earth while a slight bitterness has joined in. The strength is now slightly below medium.
Seth: The second third shows a little bit of improvement in that the sharp spice notes are gone, but there is this mineral, dry earth and sour fruit quality that remains which takes away from the cedar, hay and honey notes. Still medium in strength and body.
John: Flavor impressions for the second third were sweet wood, graham cracker and a lingering slightly tannic wood on the post draw. A mild dryness forms on the palate as the cigar settles in. As the second third progresses, graham cracker pushes back on the retrohale. In the bottom half, a nutties moves into the center of the profile. Shortly after, a mild chocolate mixes with tannins on the post draw.
Jiunn: The second third loses out on some complexities. The meatiness within the first third is gone. At this point, it’s mainly cedar and white pepper driven with an overall staleness to the profile. Strength and body is unchanged at medium plus and medium. 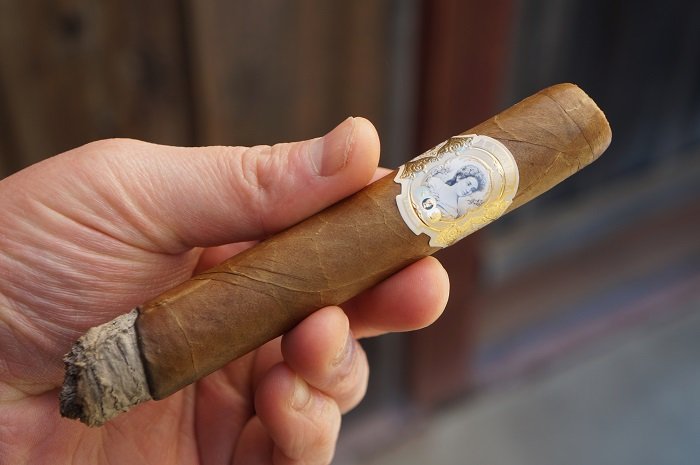 Aaron: The final third is continuing on with the musty, toasted cedar, dry earth and light bitterness. At a half inch in, the toast level is now quite heavy and the bitterness has increased a bit. The retrohale is now musty, toasted cedar and dry earth. The cigar wraps up with heavily toasted cedar, mustiness and dry earth. The strength in this third bumped up to medium.
Seth: I found the final third to be similar to that of the second third in every way. There is nothing new to report here.
John: The final third contained more sweet graham cracker, wood and a combination of mild earth with a tannic earth and wood to finish on the post draw. A toasted quality joins the post draw as it settles in. As it progressed, it became more tannic and wood forward.
Jiunn: Nothing has changed since the second third. Still medium plus strength, medium body, with flavors of overall staleness in white pepper and cedar. For how long the cigar is burning, it’s tasting a bit too monotonous. 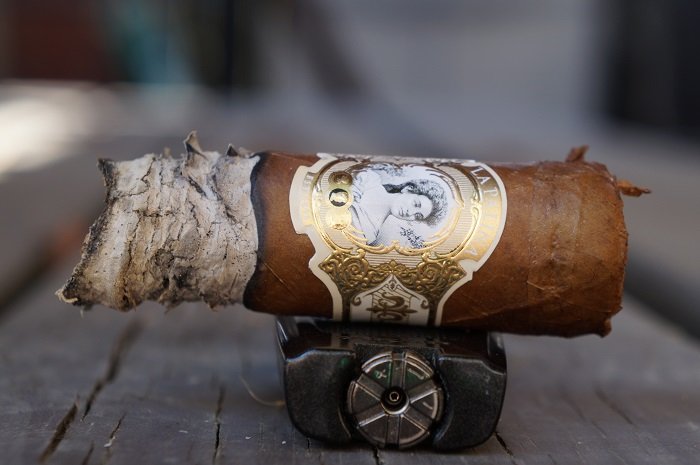 Aaron: The burn was slightly wavy throughout and the cigar went out twice, requiring re-lights.
Seth: Very good burn from start to finish.
John: The burn was fairly straight through the review with noticeable flakiness to the ash. The ash resisted being knocked off at several points. Burn was slightly uneven in the second third, ultimately correcting. The burn was offset again in the bottom half of the review, requiring a touch-up.
Jiunn: Burn performance was good. Negatives being a very uneven burn requiring three touch-ups and some loose ashes. 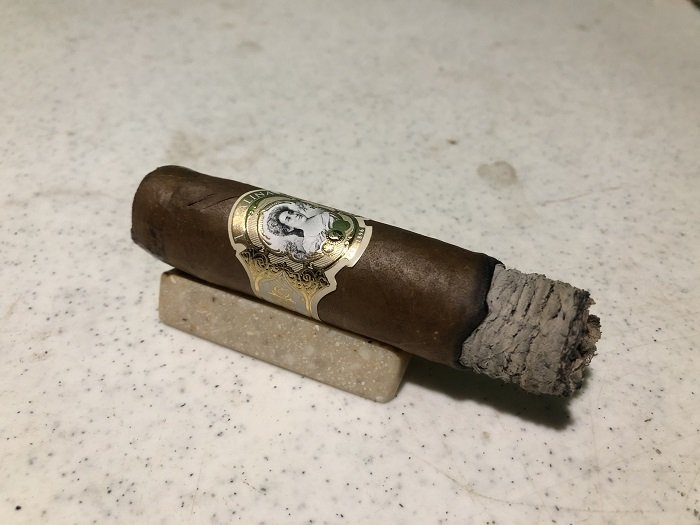 Aaron: The draw was a bit looser than I prefer, but didn’t seem to cause any issues with the smoking experience.
Seth: Very nice draw from beginning to end. Not too loose, despite the large ring gauge.
John: The draw was at most 1/2 to 1 notch into the open spectrum, putting it well within the ideal spectrum for an amazing draw.
Jiunn: Draw was perfect, giving the best balance of air flow and resistance.

Aaron: The cigar started with a similar profile to the pre-light draw and I found it interesting, but it didn’t last long until it settled into the musty and toasted cedar profile that had black pepper for a bit and then dry earth for a majority of the way. The burn issues and loose draw may be attributed to being a bit underfilled which I mentioned in the pre-light weight comment. Overall, the La Palina Goldie Laguito No. 6 had a pretty average profile and I feel that this line has become a shell of what it once was. I don’t think the large ring gauge does this blend any favors and with the very high price point, I don’t see myself returning to this cigar.
Seth: If this was not a Goldie, it would score better. I am not saying that it would be a great cigar, it would still be this cigar, but you can’t score this cigar without taking into account past Goldie releases. That’s the reality of the matter, and if you disagree with me I would be happy to debate. The truth is that the Goldie releases have gone downhill every year since the project began in 2012. Those who remember and appreciated the Goldie releases from 2012 to 2014 know what I am talking about and agree with what I am saying. This line used to be elegant. The blends were complex and the cigar showed transitioning and depth. Throughout the cigar you would discover something new. This is not a Goldie. The La Palina Goldie Laguito No. 6 is an average cigar at best. But, since this is classified as a Goldie, it is truly a disappointment and subpar.
John: After reviewing the La Palina Goldie Laguito No. 6, I found myself doing a comparison with the original and phenomenal releases of Laguito No. 2, No. 5, and the Especial. For me, the experience falls quite a bit short. That isn’t to say it was a bad cigar, it certainly isn’t, but a slightly above average experience isn’t going to be enough to motivate a second purchase on a $23 cigar. There are people who would look at the price tag and feel they were getting value based on the larger ring gauge format. Unfortunately, those are the same uninformed people that are driving the market towards larger sizes, placing more value on smoking time than overall flavor experience. Total smoking time was 2 hours and 13 minutes.
Jiunn: Oh how far the apple has fallen from the tree. This December 2020 release of the La Palina Goldie Laguito No. 6 is nothing like what it used to be. Past the initial third, it was boring and monotonous with overall staleness in white pepper and cedar. Can we please go back to 2014 where Goldies were good again? Make Goldies great again.