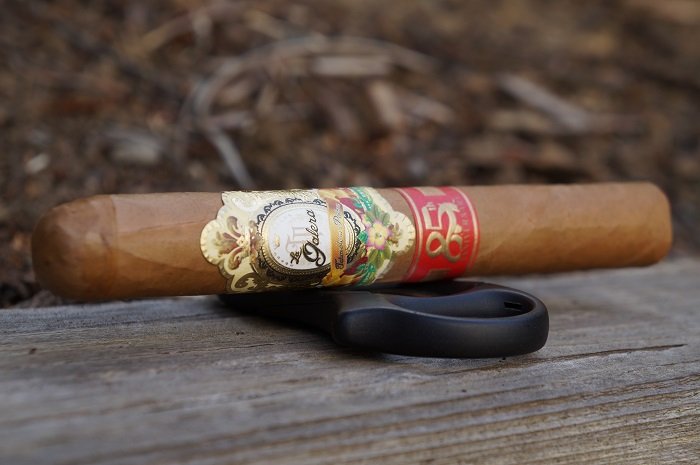 Aaron: The wrapper on the La Galera 85th Anniversary Jose “Jochy” Blanco is dark tan and has a few lightly raised veins present along with a single, small water spot. The seams are smooth and the caps well applied. There are two bands, with the primary being the traditional design for the brand while the secondary band is red and gold and denotes the special occasion. The aroma from the wrapper is a mix of cedar and dry hay while the foot brings graham cracker, jammy fruit and cedar. The pre-light draw brings cedar and dry hay.
Seth: A lovely Connecticut that has this light Colorado coloring with this dark Natural coloring, the La Galera 85th Anniversary Jose “Jochy” Blanco has this golden hay and red coloring that is great. Wrapper is silky in texture and the cigar itself sports veins that are small to medium in size. Beautiful bands, and a lovely cigar. Aromas of hay, soft earth, tobacco and grass.
John: The La Galera 85th Anniversary Jose “Jochy” Blanco comes in cellophane and has a UPC sticker attached to the main body of the cellophane so it doesn’t tear when the cellophane is opened. The cigar is double banded with a gold on red secondary band indicating ’85th Anniversary’. Aromas from the wrapper included sweet bread, and the sweetness was reminiscent of opening a jar of liquid honey, with mild hay underneath. From the foot, I picked up on hay, and more honey sweetness.
Jiunn: The La Galera 85th Anniversary Jose “Jochy” Blanco has a golden brown Colorado Claro wrapper shade. Veins are well pressed, seams tight, bunch and roll even and head well wrapped. Aromas from the wrapper give cedar and herbal tea. Aromas from the foot tell a mixture of hay and cedar. Cold draw gives the same as the foot aromas. 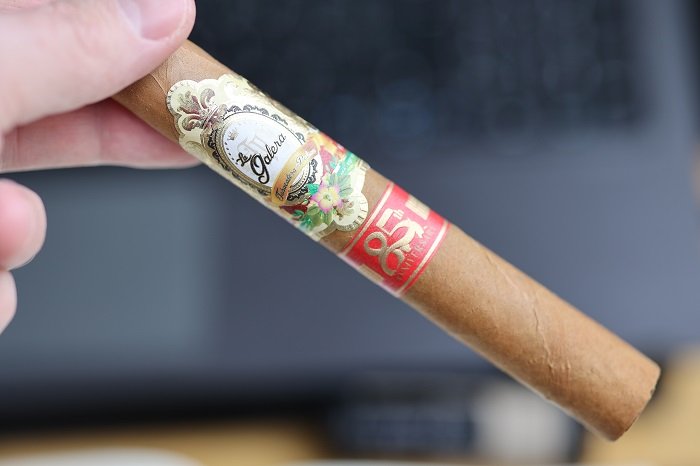 Aaron: The cigar begins with toasted cedar, dry hay and mid-level black pepper. At a half inch in, a light, dry earth has joined and the pepper has become a bit sharp. The retrohale brings toasted cedar and some black pepper. At an inch and a quarter, a light creaminess joins the profile. As the third comes to a close, the profile is toasted cedar and hay up front with sharp black pepper and dry earth a bit behind and light creaminess in the background. The strength in this third was right at medium.
Seth: The first third starts out with a lovely pepper cream profile that is paired with some tobacco and cedar notes. It is very smooth and approachable. Medium in strength and body. The cigar has this long lemon cream finish as well.
John: The first initial puffs were creamy hay with a very mild spicy wood finishing. A sweet wood joins the retrohale with dry wood on the post draw almost immediately. A subdued chocolate is buried in the retrohale as the first third settles in. Moving towards the halfway point, some hay joins the post draw.
Jiunn: The first third’s flavor delivery is as easy as butter. Dried nuts, toast, cream pastry sweetness, cedar and just a touch of red/black pepper spice to round it out. Retrohaling provides a nice black pepper and tart cherries mixture. The finish shows mild tannins and cedar. Strength and body is medium. 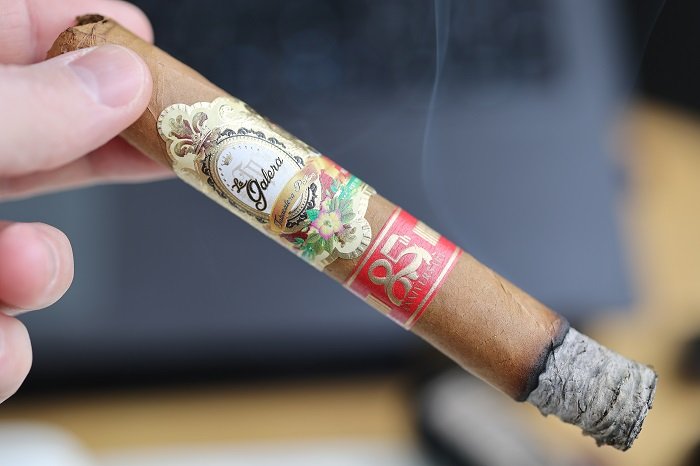 Aaron: As the second third begins, the black pepper loses its sharpness. At a quarter inch in, the dry earth picks up to become even with the toasted cedar and hay. The retrohale is now toasted cedar, dry earth and black pepper. At an inch in, the black pepper mellows a bit, the creaminess departs and the overall profile has become a bit dry. As the third comes to a close, the toasted cedar, hay and dry earth are even up front with the black pepper a bit behind. The strength remained at medium.
Seth: The second third delivers a continuation of that cream and citrus flavor from the first third, and it is paired with some tobacco and cedar notes. Bits of hay and pepper present as well on the finish. Medium in strength and body.
John: The second third starts out with a combination of creaminess and medium strength spices, toasted cedar combines with earth and cedar into the post draw. I also get a more intense spice through the post draw with a bit of a delay. As the cigar settles into the second third, the spices calm down to medium minus with hay joining the retrohale. Moving to the halfway point, the earth finishing the draw has moved to light levels. Soon after, chocolate returns to the retrohale and integrates with the baking spices.
Jiunn: The second third starts to show some pepper influence on the mouth draws as well as intensifies the cedar note. But the overall profile still has a ton of soft notes. Still abundant dried nuts, toast and cream pastry sweetness. Strength and body remains medium. 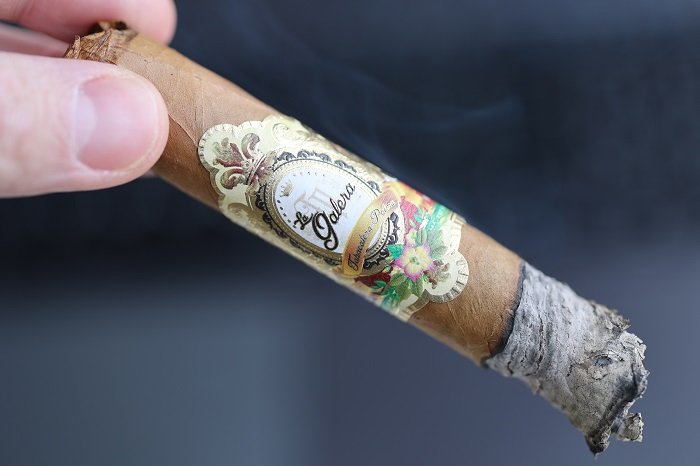 Aaron: As the final third begins, the toast level increases and a slight wood bitterness becomes present. At a half inch in, the toast transitions to char. The retrohale is now toasted cedar, dry earth and very mild black pepper. At an inch in, a mintiness has become present as the cigar has warmed up a bit. As the cigar wraps up, the profile is charred cedar, hay and dry earth up front with mintiness right behind and light black pepper in the background. The strength in this third bumped up to slightly above medium.
Seth: The final third is right in line with the second third. I am picking up lots of cream, hay and cedar notes. Bits of earth, pepper and soft lemon peel as well on the fiish. Medium in strength and body.
John: Hay and baking spices get things started, both at light-plus strength. As the cigar progresses, the hay lingers into the post draw, as chocolate returns to the retrohale. The post draw hay takes on some sweetness as it continues, eventually seeing the hay build up to medium strength.
Jiunn: The final third is a continuation of the second third. Still a bit more pepper and cedar while maintaining all the soft/white notes. Strength and body finishes the same medium. 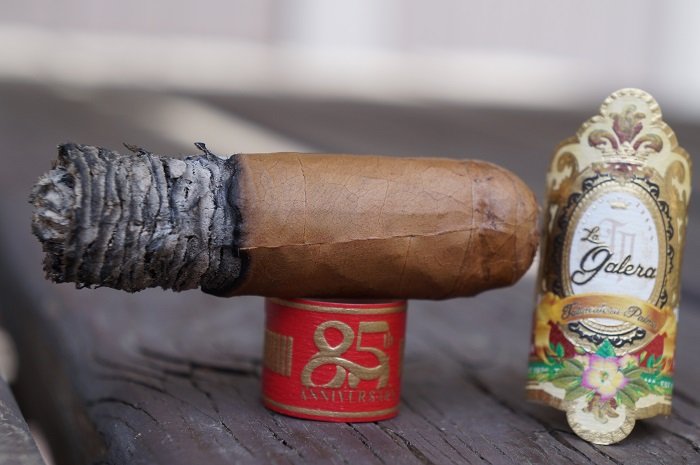 Aaron: The burn line was straight throughout and the ash held on in inch and a half increments.
Seth: Great burn thoughout.
John: The burn was straight through the review. I did find the burn stalling near the end of the first third, and a section of wrapper not burning for a time. No intervention was required.
Jiunn: Beautiful burn. Tight ashes, even burn, cool burning temperature and ample smoke production. 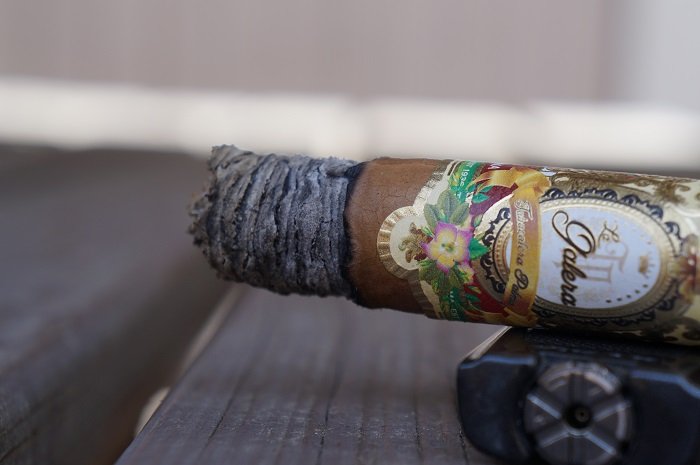 Aaron: The cigar began with toasted cedar, dry hay and mid-level black pepper. Some dry earth joined in fairly quickly and some light creaminess a bit later. The second third saw the creaminess depart. The final third saw the toast build up and transition to char along with a mintiness join in as the cigar heated up. Construction was perfect. The flavor profile of the La Galera 85th Anniversary Jose “Jochy” Blanco was a bit raw, with some in your face flavors, but never really finding any balance. The cigar finished on a down note with the char and mintiness. The price point isn’t out of line for an anniversary release, but the flavor profile doesn’t really intrigue me enough to revisit. I’m looking forward to see how the Broadleaf version fares.
Seth: The La Galera 85th Anniversary Jose “Jochy” Blanco is a good cigar, but I just don’t see it as a premium or limited edition cigar. This does not smoke like a $15.00 cigar. This smokes like a price friendly Connecticut. I enjoy price friendly Conneticut’s, but one of the aspects I enjoy about them is that they are price friendly. This was lacking complexity and depth. Transitioning as well. Great construction and solid flavors, but not really good or wowing.
John: The La Galera 85th Anniversary Jose “Jochy” Blanco was an enjoyable cigar to review, with nuanced and intense flavors that seemed to never overpower each other through the first and second thirds. The last third didn’t maintain the same level of complexity, but was still pleasant. Both the burn and draw were excellent. I would definitely smoke the La Galera 85th Anniversary Jose “Jochy” Blanco again, and I think a lot of people who find Connecticut cigars too light would appreciate the ramped up complexity present. Total smoking time was a bit quicker than I expected at 1 hour and 47 minutes.
Jiunn: This La Galera 85th Anniversary Jose “Jochy” Blanco was a well blended cigar showing quite possibly the best balanced profile so far this year. A great array of soft/white notes centered around nuts, toast, sweet pastry creaminess, with nuanced cedar and red/black pepper spice. Not crazy about the price point, but it is what it is. I’ll for sure put these through my rotation.