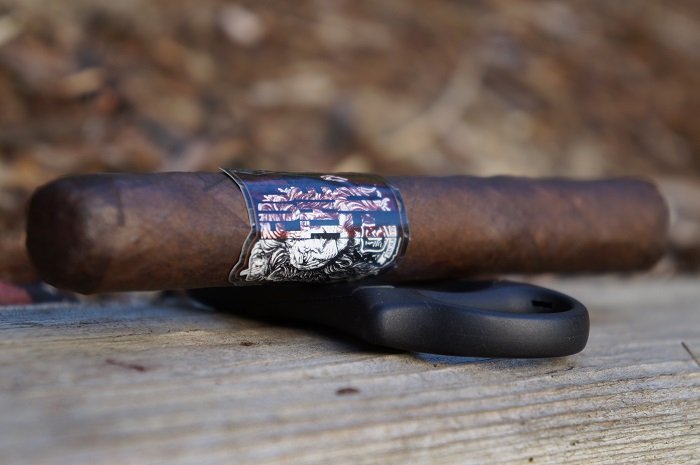 The wrapper on the Jas Sum Kral Fuck the FDA is marbled dark brown and has some slightly raised veins present as well as some protruding from underneath. The seams are fairly easily visible as they are raised in some areas and due to the wrappers color variation. The head is finished off with a well applied triple cap. Overall, the cigar feels a bit light in hand. The band is primarily black with the brands lion logo in white. The line name is faded in with a burgundy color and there are embossed hands with the middle finger up all along the sides and back. The aroma from the wrapper is a great mix of rich earth, cocoa and spicy cedar. The foot brings wood and tobacco sweetness. The pre-light draw consists of well aged cedar with a mild spiciness on my lips. 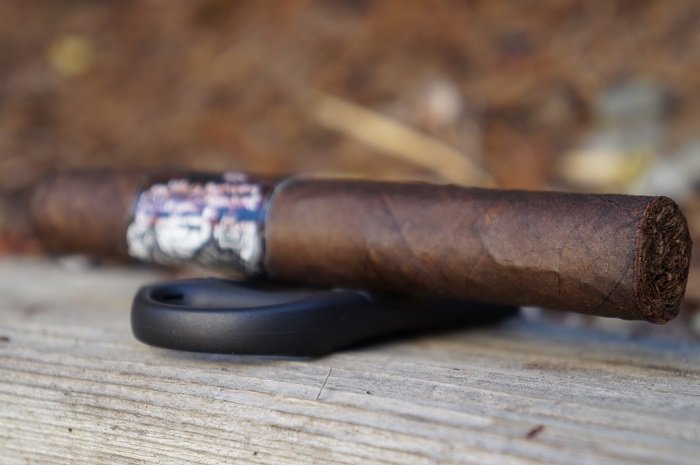 Firm in hand, the Jas Sum Kral Fuck the FDA is finished with a wrapper that is silky in texture. It has a light maduro coloring, milk chocolate candy baresque, and there are medium veins present throughout. The foot is giving off an aroma of manure, rich earth, dark cocoa and tobacco, while the wrapper has spice, leather and wood notes. While I don’t care for the band, I will say it is well done. When Protocol does releases like this, the bands/packaging are awful. JSK has done well here. 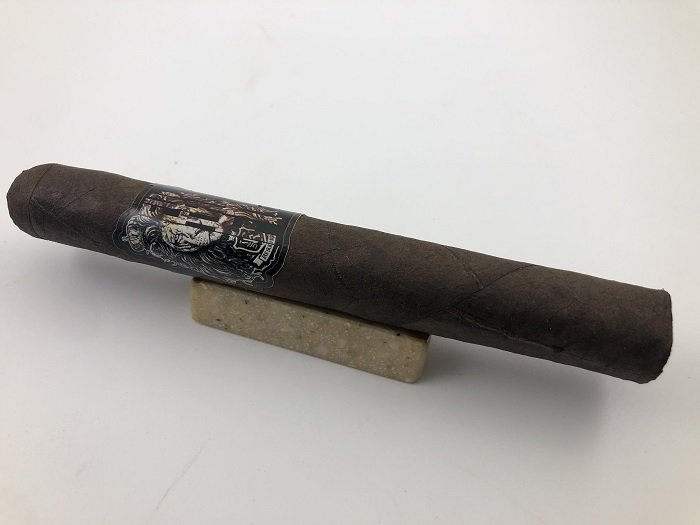 The Jas Sum Kral Fuck the FDA has a dark chocolate wrapper with firmly pressed veins. I was able to detect aromas of medium strength barnyard and fresh, green wood underneath. From the foot, I picked up toasted tobacco. I wasn’t a fan of the font design on the band. The ‘Fuck the FDA’ text blended in too much with the background making it difficult to read. 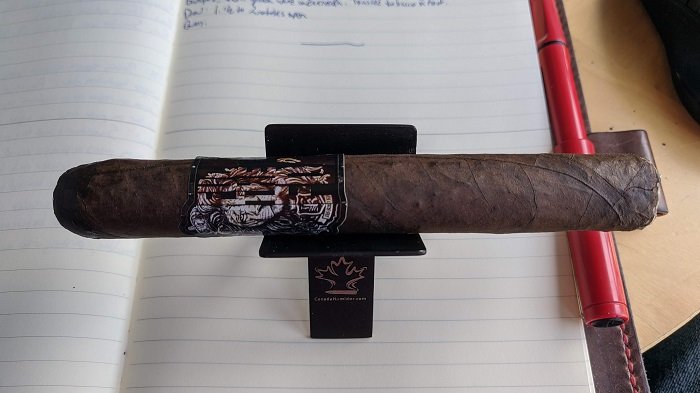 The Jas Sum Kral Fuck the FDA has a uniformed maduro wrapper shade. Veins well pressed, seams tight, bunch and roll even and head finished off with a multi-layered cap. Aromas from the wrapper and foot tell rich cedar and star anise. Cold draw reveals buttery and oily roasted nuts. 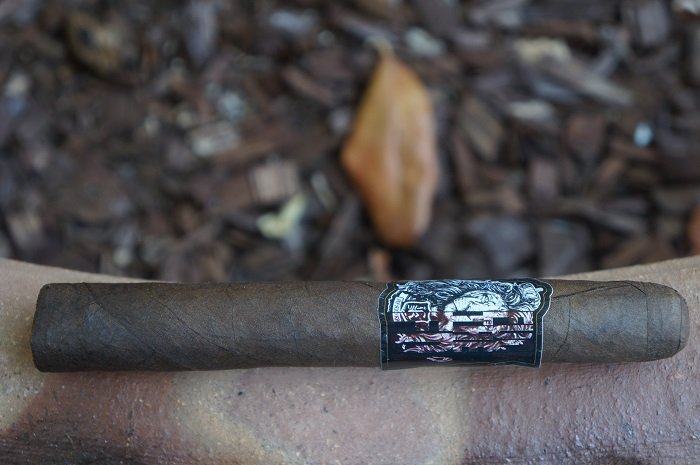 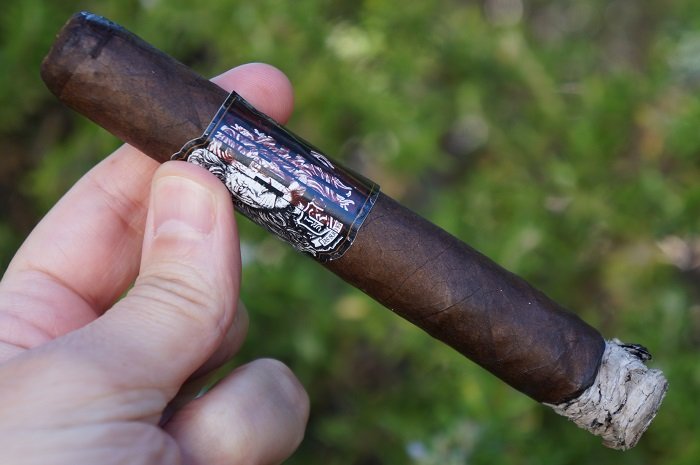 The first third begins with a nice spice level and I am getting this sweet Christmas spice quality. There are some sweet minty qualities present as well, and it pairs well with those nutmeg, cinnamon, clove and black pepper notes. It is paired with some faint earth and cocoa powder notes as well. In terms of strength and body, I would classify the cigar as being just above the medium level. 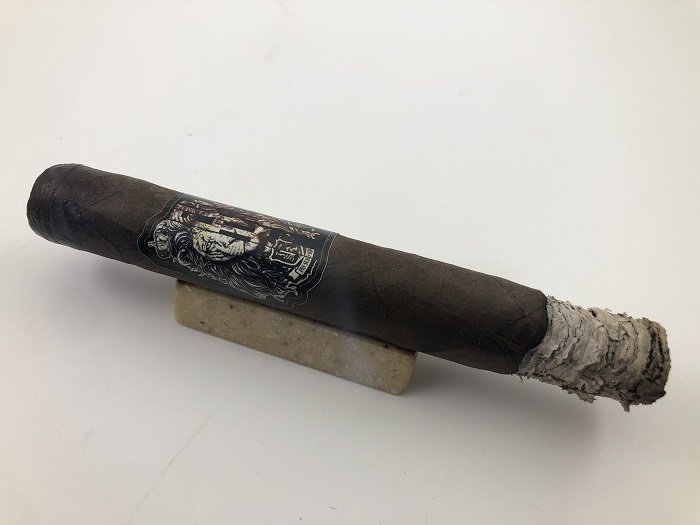 My first few puffs brought some light baking spices, wood and lingering wood on the post draw. The retrohale added baking spices and mild coffee. As the cigar settled in, sweet wood at light plus strength defined the middle of the profile. By the 20 minute mark, a dark fruit sweetness joins the retrohale. Approaching the halfway point, a mild toasted component adds to the complexity. 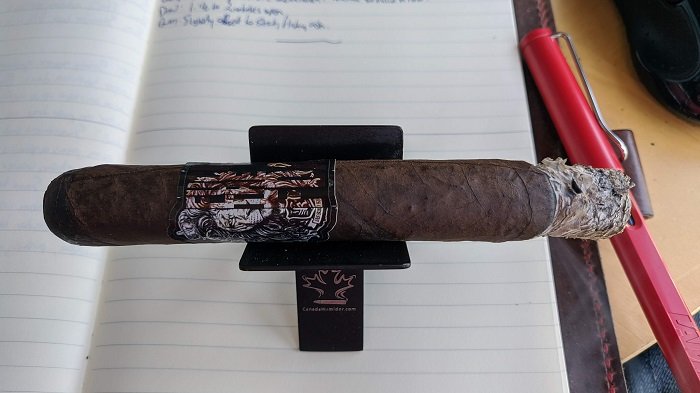 The first third has a mix of earth forward flavors. Ample roasted coffee, slightly bitter oak and natural sweetness from roasted nuts. Retrohaling shows some nice baking spices and greater sweet roasted nuts. The finish is long with a subtle bitter oak and nuts. Strength and body is medium. 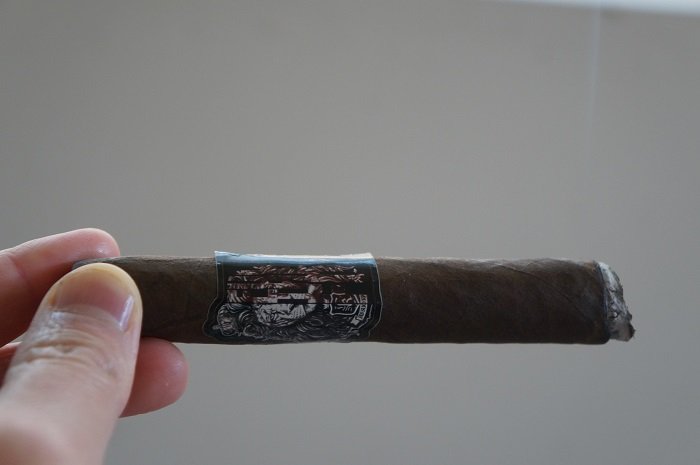 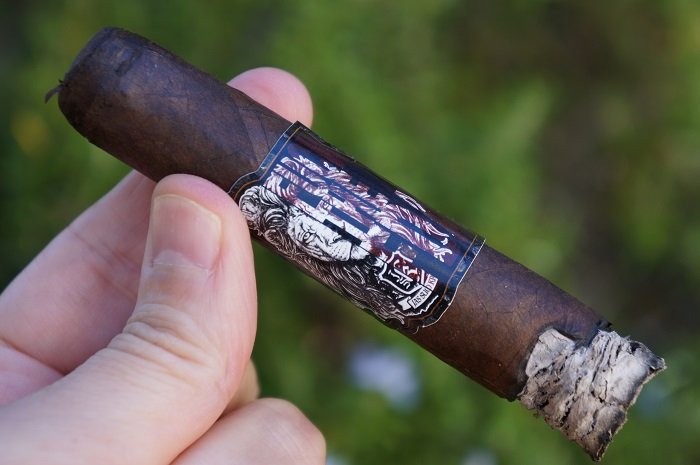 The second third shows some transitioning and I am getting a flavor profile that is predominately delivering this Mexican hot chocolate flavor. With that, I am picking up notes of black pepper, cinnamon and earth. Like before, the cigar is smoking at a medium level in strength and body. 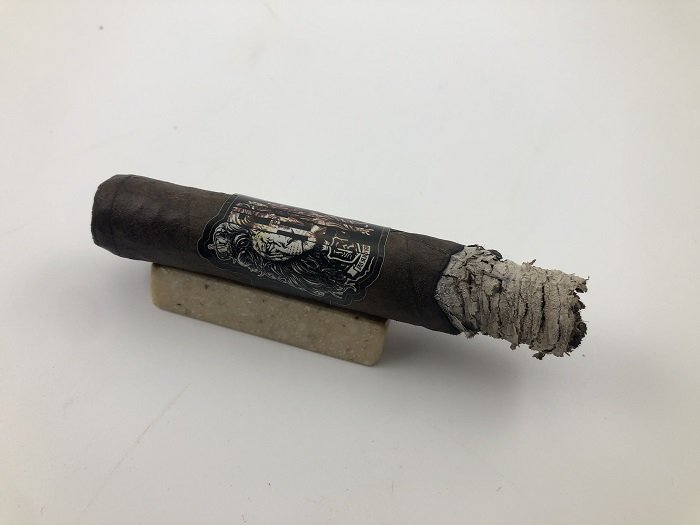 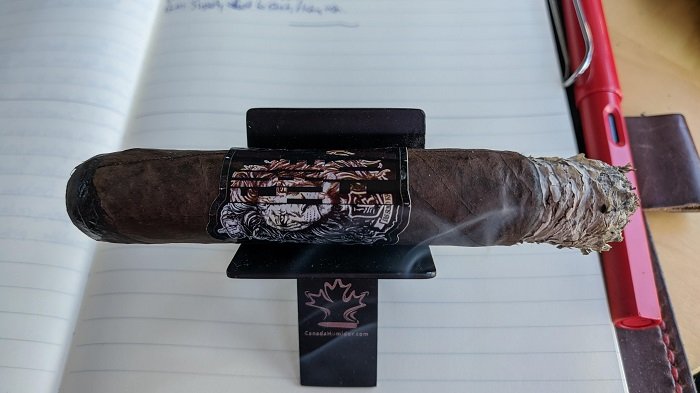 There’s a shift towards having the bitter oak take over. The bitter oak especially sits heavier on the finish and palate. The difference of bitter oak between the first third and second third is the first third was an accent, giving profile structure and the second third, overpowering. With this said, there’s less influence of baking spices, roasted coffee and sweetness. Strength and body remains medium. 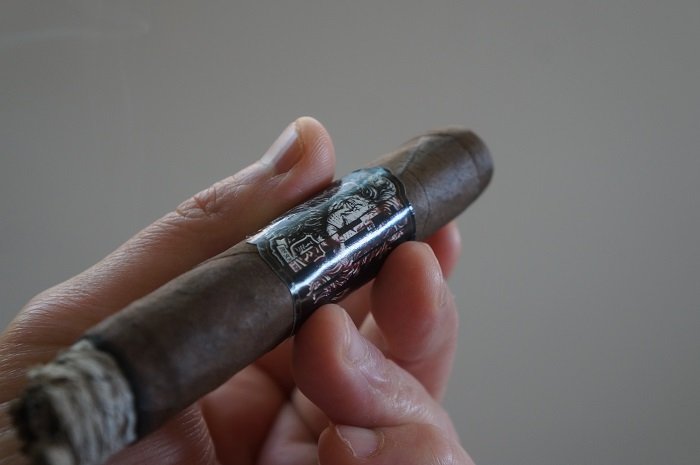 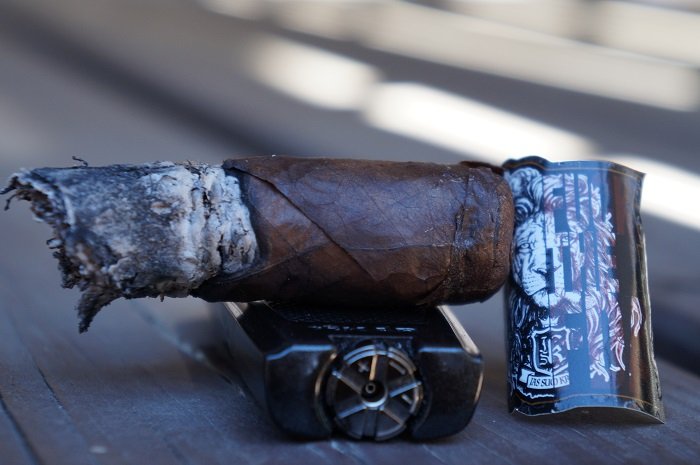 The final third shows a demise overall in the flavor profiles delivered and I am picking up notes of wood, harsh minerals and pepper spices. It is still smoking around a medium level in strength and body, but the flavors are lacking and not enjoyable. 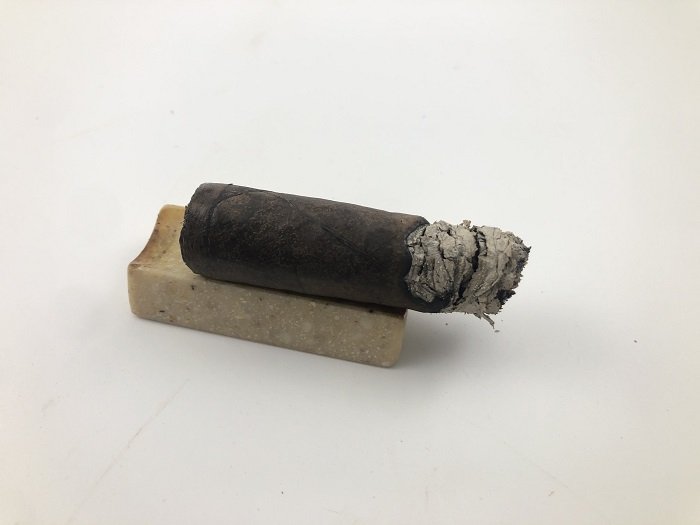 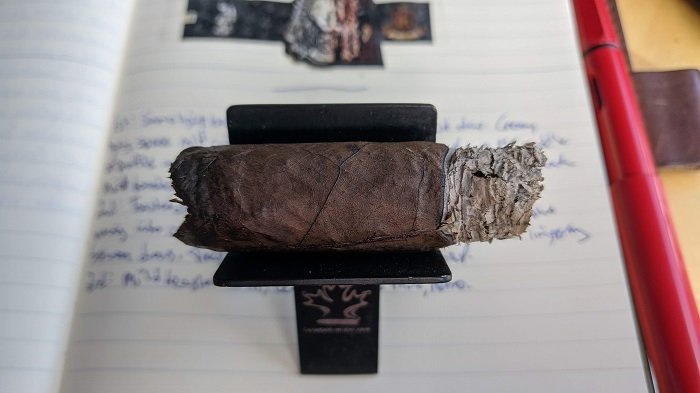 The last third is an extension of the second third. Bitter oak is still the dominant note with trailing baking spices, roasted coffee and sweetness. Strength and body finishes medium. 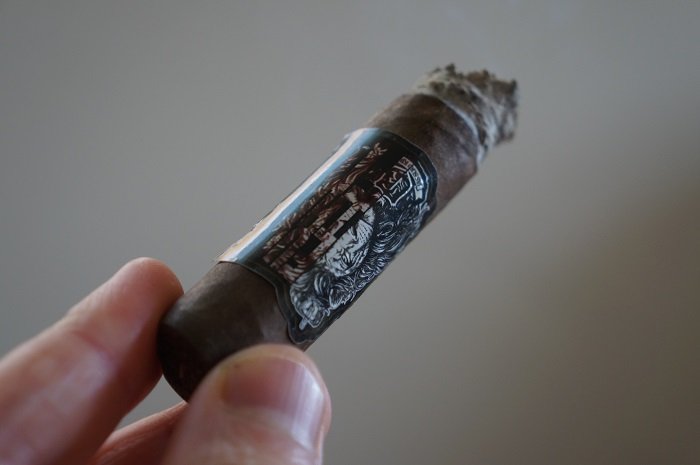 The burn was fairly wavy throughout. The cigar went out twice in the first third, requiring re-lights and required a fairly major touch-up in the final third. 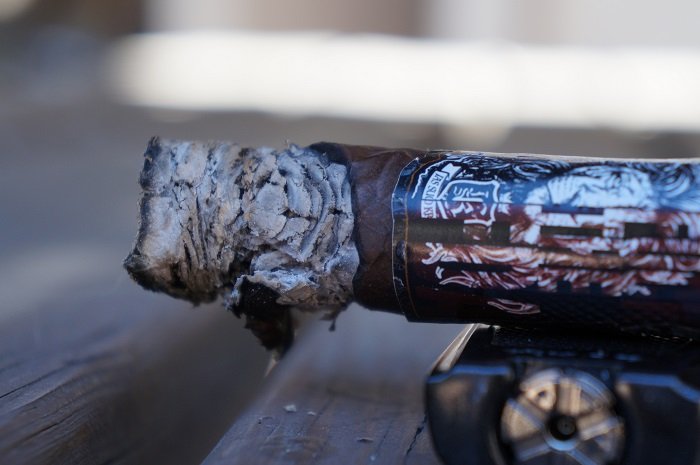 Throughout the cigar, the burn was solid. Fairly even and producing no waves. With that, I had to touch-up the cigar once. Nice burn. 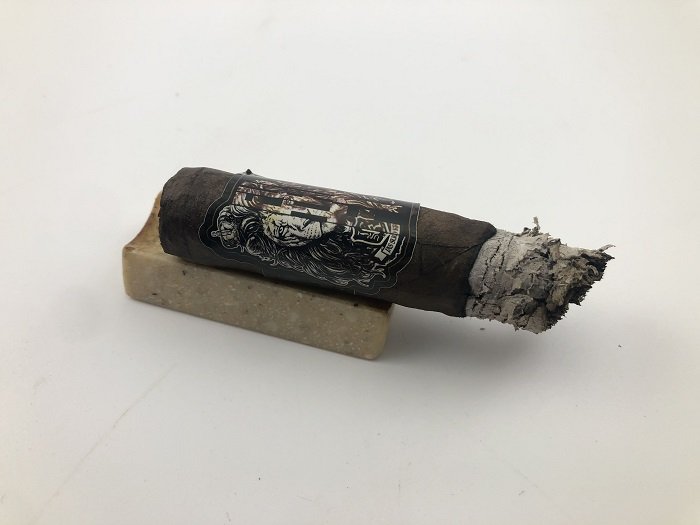 The ash held on well, up to 1-1/2 inch increments, with some flaky aspect to it. The burn was slightly offset in the first third but quickly self corrected. 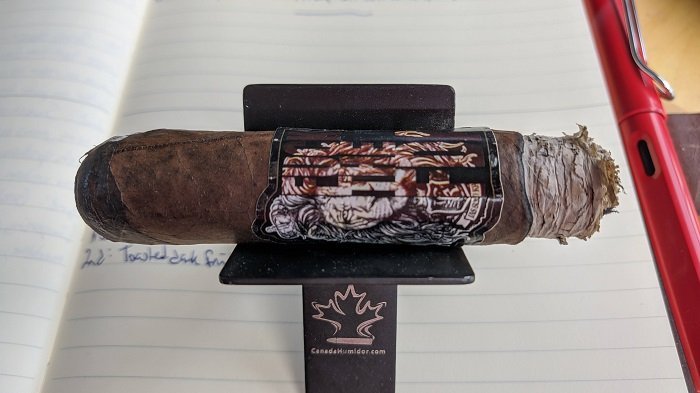 Burn performance was overall very good aside from some flowery ashes and a couple quick touch-ups. 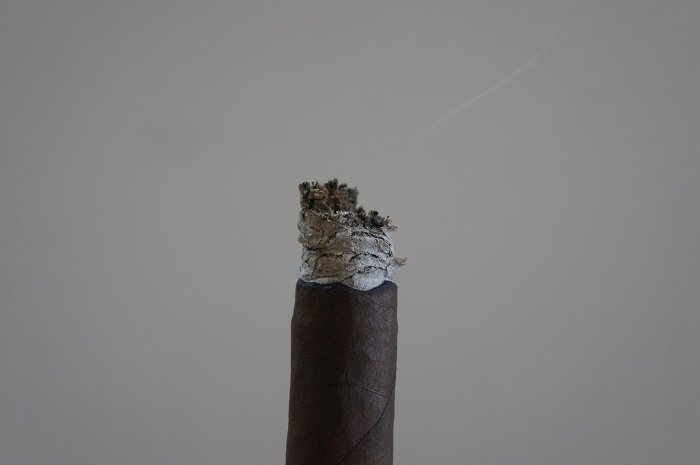 The cigar began with toasted cedar, rich earth and light black pepper. Some mustiness joined in fairly quickly. There was a short burst of cocoa powder as well. The final third saw the toasted note transition to char. The burn was a bit of a drag, but the draw was perfect. Strength was medium most of the way. The Jas Sum Kral Fuck the FDA had a nice start as the cocoa really brought things together. Once it left, things became average and maintained that enjoyment level the rest of the way. The name of the cigar is quite bold, but in regards to the enjoyment level, I felt it was a pretty standard offering on the market. It had some typical San Andres traits, but also some not so typical. It was an interesting cigar to smoke and would recommend others give one a try to see what they think.

Draw was very good from beginning to end. Nice level of resistance.

In keeping with the norm of the cigar industry, especially in 2020, this was a poor cigar. It wasn’t disappointing, but exactly what I was expecting. It started off nicely, but gradually went downhill to complete garbage in the final third. There were some nice Christmas spice flavors present in the beginning, some Mexican hot chocolate in the second third, and then nothing in the end. It showed consistency in strength, body, burn and draw, but it lacked enjoyable flavors and depth throughout. It just went downhill and you can’t get points for transitioning and complexity for flavors that are changing for the worse. That’s like congratulating Kamikaze pilots on their landing. The Jas Sum Kral Fuck the FDA was simply not a good cigar and not worth the money. One could say that this cigar, in all aspects, represents the industry’s response to FDA. When I think of the state of the cigar industry and this cigar at one time, I think of the skit by Bill Engvall, “Here’s Your Sign.”

The draw was towards the open spectrum, roughly 1-1/2 to 2 notches.

The Jas Sum Kral Fuck the FDA offered some interesting flavor complexity in the first third that I was getting into. The profile evolved through the second and last third to be toasted forward, which wasn’t bad, it just lacked the complexity and depth of flavor that the first third offered. Overall, I found the experience to be average. I would likely try this cigar again after a few months, if only to see whether the second and last thirds had changed over time. Total smoking time was 1 hour and 50 minutes.

The draw on the other-hand was perfect, giving the ideal air flow.

The Jas Sum Kral Fuck the FDA was an average tasting experience for me. The main negative factor was the bitter oak going from giving good structure within the first third to overpowering. This unfortunately allowed the other good flavors of baking spices, roasted coffee and sweet roasted nuts to take a back seat. The price point of this cigar is good at $10, but stacked against the plethora of Mexican San Andres available in the market, this wouldn’t be my first choice.