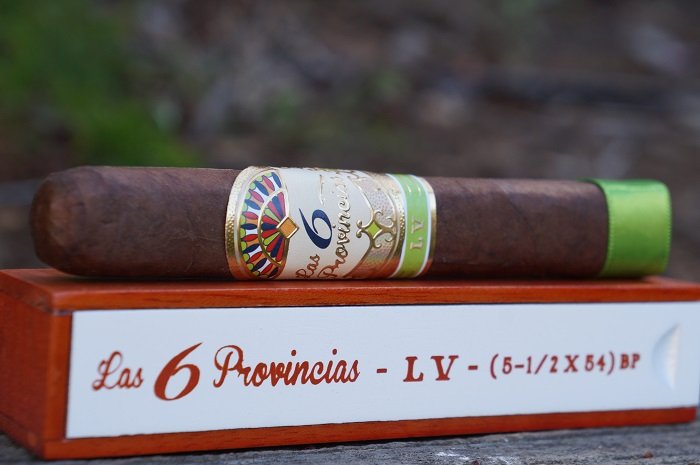 Aaron: The rectangle pressed Espinosa Las 6 Provincias LV has a wrapper that is medium brown with a couple of decently raised veins. The seams and edges of the caps are both a bit raised. There are two bands, with the primary being the traditional design for the line but having a supporting color of slightly pastel green and denoting LV. The foot ribbon is more of a neon green. The aroma from the wrapper is slightly damp wood while the foot brings lightly sweet cedar and a decent dose of pepper. The pre-light draw brings an airy cedar.
Seth: The wrapper on the Espinosa Las 6 Provincias LV has a nice marbled brown coloring and it sports tooth and minor veins throughout. It is firm in hand and nicely pressed. The coloring is that of Colorado Maduro, and I am picking up aromas of chocolate, graham crackers, spices, earth and cherries on the foot. The wrapper is giving earth, leather and manure notes.
John: The Espinosa Las 6 Provincias LV comes in cellophane, and does not have a UPC sticker. It has a large, single band that covers just over 20% of the cigar. I would discover later that the main band consists of two layers, as there is an additional band stacked underneath. Additionally there is a bright green ribbon as a foot band. For additional artisanal complications the cigar is box pressed. Aromas from the wrapper included light-plus strength wood, and sweet bread at light strength. From the foot, there was light baking spices, wood and hay.
Jiunn: The Espinosa Las 6 Provincias LV has a uniform Colorado wrapper shade. Veins are neatly pressed, seams tight, bunch and roll even and head well wrapped. Shout out to the green accents, it’s not only unique but it pops. Aromas from the wrapper tell of a pungent barnyard and white pepper. Aromas from the foot give the same vibe but a much larger dose of white pepper. Cold draw reveals cedar shavings and mild white pepper spice. 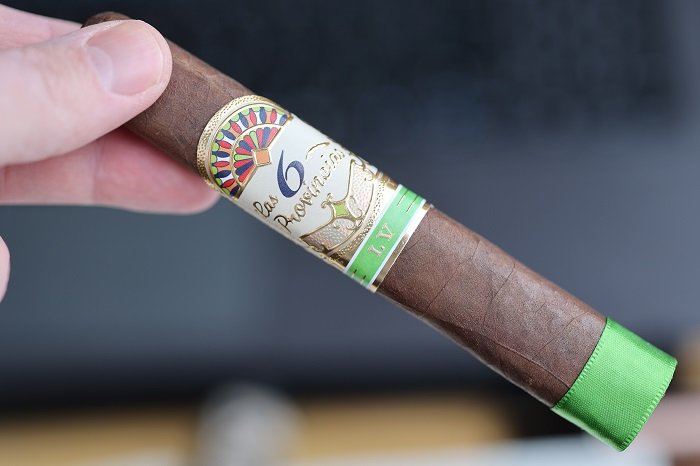 Aaron: The cigar begins with lightly toasted cedar and sharp black pepper. At a half inch in, the pepper has mellowed immensely as a light mix of mustiness and creaminess has joined in. The retrohale is lightly toasted cedar, mustiness and creaminess. At an inch in, the mustiness picks up and is paired with the toasted cedar. As the third comes to a close, the profile is musty, toasted cedar up front with mild creaminess and black pepper in the background. The strength was at mild-medium for most of the third.
Seth: The first third opens with strong black pepper notes that are paired with rich earth and dark chocolate flavors. There are some oak and coffee flavors present as well, and the finish is that of leather and more pepper spices. Medium-full to full in strength and body.
John: My initial flavor impressions are baking spices, wood and bread all at medium-minus strength. Some post draw medium strength pepper hits after just two puffs. As the first third settled in, some bread pushes through and brings with it some medium strength earth through the post draw. As the cigar progresses, the post draw baking spices move up to medium-full. Approaching the halfway mark, chocolate joins the retrohale. Not long after, some mild leather breaks through the post draw.
Jiunn: The first third, overall, has all the good traditional notes going for the cigar. It’s naturally sweet and nutty, good white pepper coming through, and toasted cedar. I do however need to keep an eye on the sharp finish. It has a seeded pepper spice on the back end, in which if it gets more prominent, it will throw off the balance and a general unpleasantness will ensue. Strength is medium-full, body is medium. 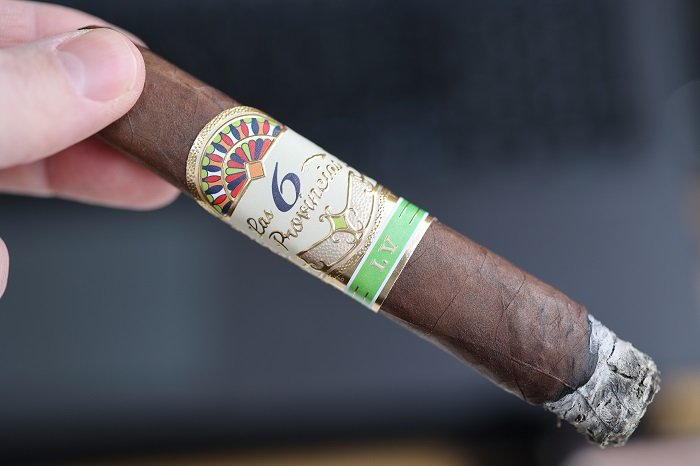 Aaron: As the second third begins, the creaminess is no longer detectable. At a half inch in, the black pepper picks up slightly as a light, dry earth joins the profile. The retrohale is now just musty, toasted cedar. At an inch in, the toast level increases a bit while a subtle floral note joins the profile. As the third comes to a close, the profile is musty, toasted cedar up front with dry earth behind and light amounts of black pepper and floral notes in the background. The strength bumped up to slightly below medium.
Seth: The second third delivers a flavor profile that is predominantly earth and black pepper. The earth notes have sweet qualities, and that balances out the pepper spice. Bits of peanuts, leather and wood are present as well, and like before it is medium-full to full in strength and body.
John: Sweet baking spices take the cigar into the second third, along with creaminess and graham cracker. Wood is present in the center of the profile from the start here. As the second third progresses, molasses sweetness joins the wood in the center of the profile. Moving towards the halfway point, the wood joins the post draw and brings with it some dryness.
Jiunn: The second third picks up a roasted stale char that you get off some over-extracted coffee. The spice is also more intense, especially on the finish. At this point, the retrohale is my favorite part, giving bumped up white pepper but also a really rich sweet nuttiness. Strength and body is unchanged at medium plus and medium. 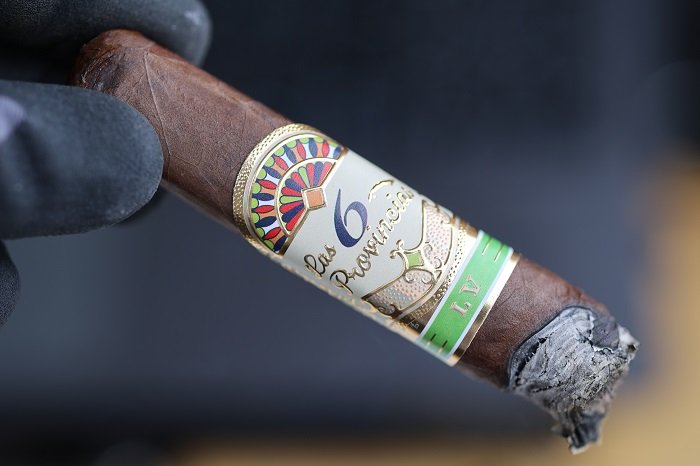 Aaron: As the final third begins, the toast level increases some more and a light wood bitterness appears. The retrohale is now musty, toasted cedar and dry earth. As the cigar wraps up, the profile is musty, heavily toasted cedar with dry earth right behind and light amounts of pepper, wood bitterness and floral notes in the background. The strength bumped up to medium.
Seth: The final third is fairly in line with that of the second third and this is a cigar that is delivering dark chocolate, earth and black pepper notes. There are some nutty and leather qualities as well, but it is chocolate, earth and pepper. Full in strength and body at the end.
John: Dry wood leads the cigar into the last third. That dry wood carries into the post draw and brings with it some mild earth. The post draw earth rapidly builds up to medium strength. As the last third progresses, bread and baking spices combine into the center of the profile.
Jiunn: The final third is a continuation of the second third. Still that over-extracted coffee, intense white pepper spice and toasted cedar. Strength and body finishes the same medium plus and medium. 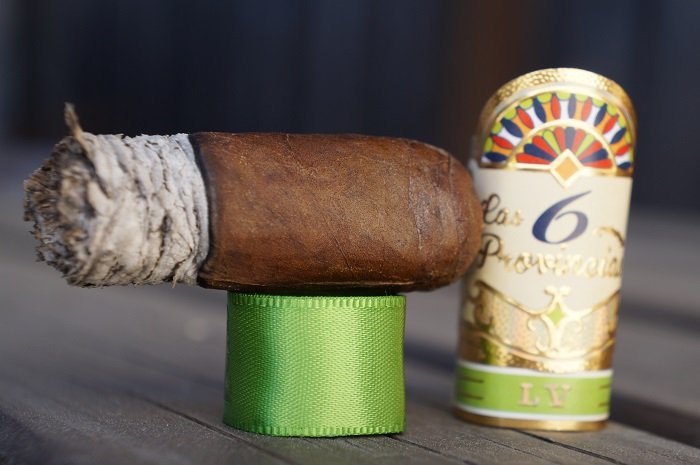 Aaron: The burn was wavy through the first half and then straight the rest of the way. The cigar also went out twice during the first half, requiring re-lights.
Seth: Nice burn from start to finish.
John: The burn started slightly uneven, correcting and then straight through the rest of the review. The ash held on well, just over the one inch mark before I tapped it off.
Jiunn: Wonderful burn performance. Even burn, ample smoke production, solid ashes and cool burning temperature. 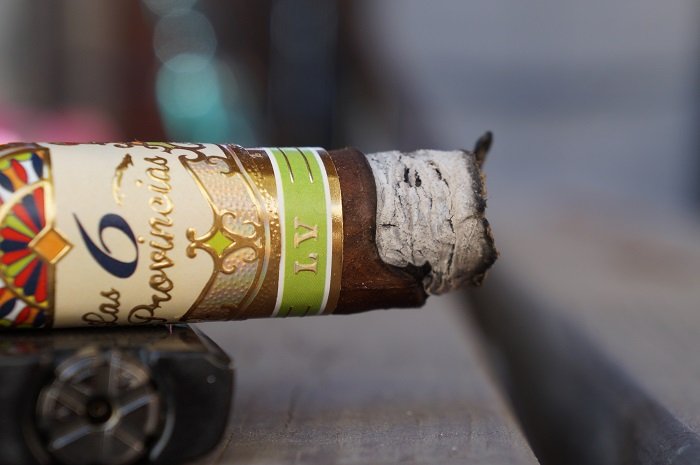 Aaron: The cigar began with lightly toasted cedar and sharp black pepper. After the early re-light, the black pepper mellowed a lot and some creaminess joined in. The second third saw the cream drop out and some dry earth and floral notes join. The final third saw the toast level increase and some wood bitterness join in. The Espinosa Las 6 Provincias LV started sharp, but the early re-light settled things down. The second third picked up in enjoyment and then dropped off again at the end. I’d put this on par with the MTZ, but a bit behind the LHB. The price point is quite high, and I don’t think I’d see myself returning to this one.
Seth: I found the Espinosa Las 6 Provincias LV to be an improvement over last year’s Las 6 Provincias release and the best Las 6 Provincias release to date. It was also the prettiest of the three cigars in terms of wrapper, bands and coloring. I am not sure it is a release that has me itching for next year’s release, or the two releases after that, but it is nice to see some improvement. The cigars tend to start out well, but quickly become average for the remaining two thirds. That needs improvement. I enjoyed the strength of the cigar and those rich earth, black pepper and cocoa notes.
John: The Espinosa Las 6 Provincias LV delivered consistently balanced flavors through the first and second thirds, with the last third still being pleasant but for me lacking the same complexity level to engage my interest. The draw and construction were perfect. I think the latest iteration of the Las 6 Provincias series might be the best or second best of the series so far, and I look forward to seeing how 2023 stacks up. Total smoking time was 1 hour and 51 minutes.
Jiunn: Beautiful packaging, looks are on par with a premium $22 price tag. However, none of this matters if the smoking experience does not deliver. Unfortunately, past the initial first third, the flavor profile did not deliver. I found the experience with the Espinosa Las 6 Provincias LVto be an over extraction of many things; coffee, spice and staleness. Given all this, I look forward to the fourth iteration of this series.