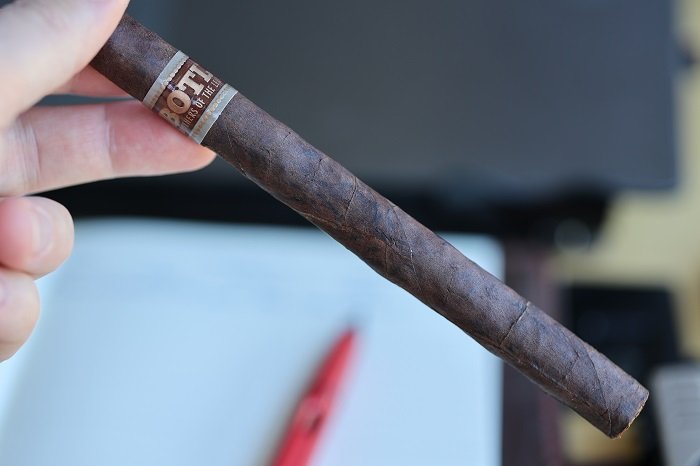 Aaron: The wrapper on the Drew Estate BOTL Brown Label 2020 Lancero is a marbled dark brown with a reddish hue. There are a few slightly raised veins and the seams are easily visible as they are a bit raised as well. The head is finished with a sloppily applied double cap. The band is the traditional design for the line with burgundy, gold and gray. The aroma from the wrapper is a mix of damp wood and damp earth while the foot brings wood and stone fruit sweetness. The pre-light draw brings a light and airy cedar with a mild spiciness on my lips.
John: The Drew Estate BOTL Brown Label 2020 Lancero comes in cellophane but does not have a UPC sticker. The cigar has a lumpy, rustic appearance. The wrapper on the cigar is quite dark. Nosing the cigar, I picked up on sweet barnyard, at medium to medium-plus strength. From the foot, there was sweet tobacco. 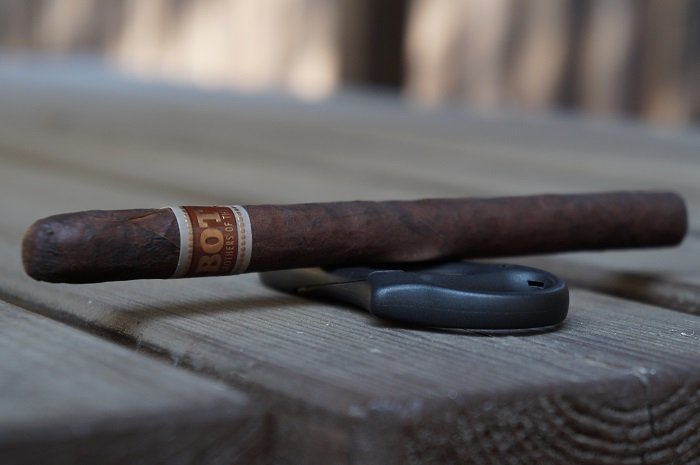 Aaron: The cigar begins with dark wood and baking spice. At three quarters of an inch, some mustiness joins the profile. The retrohale is also dark wood, mustiness and baking spice. At an inch and a half, the dark wood gains a light char. As the third comes to a close, the lightly charred wood is up front, followed by mustiness and the baking spice is in the background. The strength in this third was slightly below medium.
John: Sweet wood opens the first third, and carries into the post draw. Medium-plus strength baking spices are immediately present on the retrohale. Pepper takes over the post draw at full strength. As the first third settles in, medium strength chocolate joins the retrohale. As the cigar progresses, pepper calms a bit to medium-full. Some time later, a spirit-like sweetness joins the pepper on the post draw. Light-plus leather joins the main profile approaching halfway, as the chocolate starts to lead the profile. 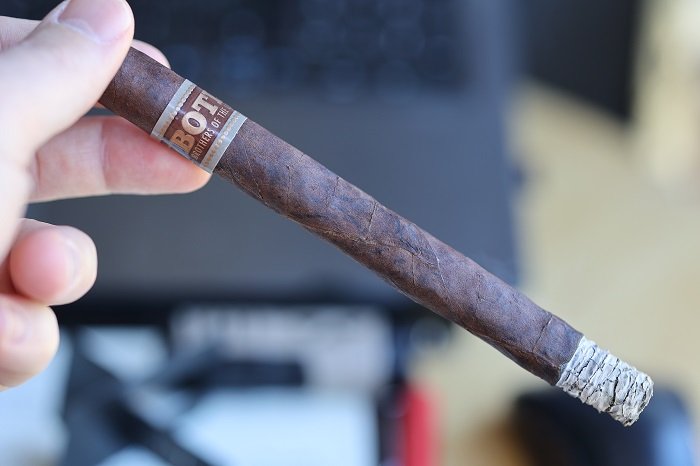 Aaron: As the second third begins, the baking spice picks up and is even with the lightly charred dark wood while the mustiness is just behind. The retrohale is dark wood and mustiness. At an inch and a half, the baking spice and mustiness are now even, just behind the lightly charred dark wood. The strength in this third bumped up to medium.
John: The second third gets things going with creamy wood, and light leather to finish, carrying wood into the post draw. Mild wood also takes home in the center of the profile. As the cigar progresses, earthiness comes through at the end of the draw. Sweet earth and wood are driving the profile in the bottom half. Medium pepper returns to the post draw shortly after. Some moss is present as the second third closes out. 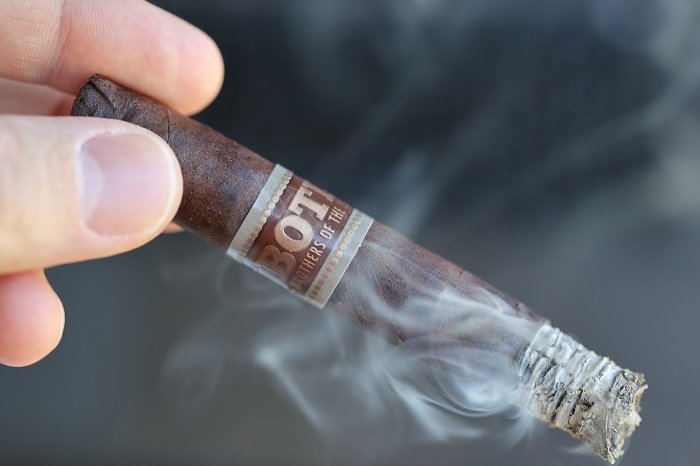 Aaron: As the final third begins, the lightly charred dark wood remains up front with the mustiness right behind and the baking spice now light in the background. At a half inch in, the char picks up a bit. The retrohale remained dark wood and mustiness. The cigar wraps up with charred dark wood up front, mustiness right behind and baking spice light in the background. The strength in this third remained at medium.
John: Sweet earth, combined with pepper and wood on the finish greet me in the last third. The pepper ramps up upon the retrohale immediately to medium-full. Earth and pepper sit heavy on the palate through the post draw, as it progresses. Cocoa returns to the retrohale at medium strength. Some creaminess is present by the halfway point, but run over by the strength of the earth, wood and pepper. 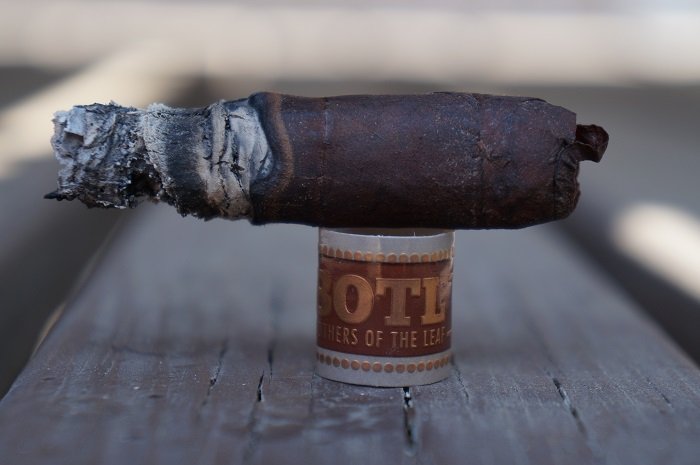 Aaron: The burn was a disaster, requiring five re-lights and two touch-ups to keep things burning.
John: Two cigars were reviewed and the burn was consistent for both. The ash held on up to 1-1/2 inch increments going out at the end of the first third, requiring a re-light. 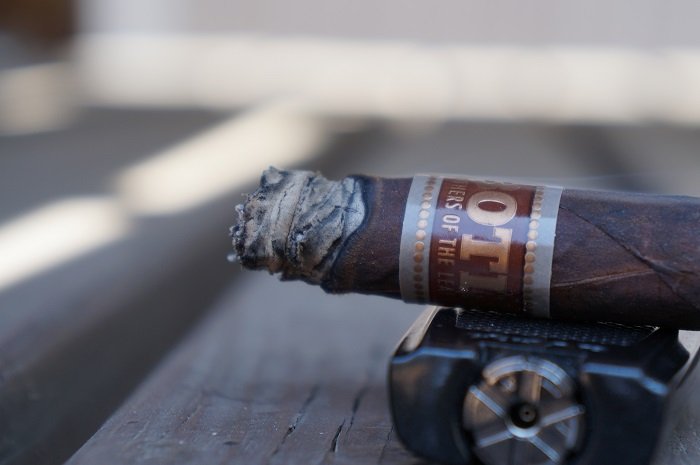 Aaron: The draw was slightly tighter than I prefer, but didn’t seem to cause any issues with the smoking experience.
John: The first cigar had a draw in the ideal zone, roughly 1 notch of resistance which would rate amazing. The second cigar had a resistant draw, roughly 3 to 3-1/2 notches in the resistant spectrum, which would rate average. Those scores combine for a good overall draw.

Aaron: The cigar began with dark wood and baking spice. Some mustiness joined a bit later as well as a light char. The final third saw the char pick up a bit. The burn was horrible but the draw was good and strength was medium most of the way. The Drew Estate BOTL Brown Label 2020 Lancero started with a profile that was simple but good. As the char joined, it knocked things down to average and maintained that level the rest of the way. The burn really put a damper on my experience and had to have an effect on the flavor with the constant re-lights. I’m interested to see how other samples fare in regards to the burn as it may make it worth a revisit, but based on my experience, I can’t recommend it.
John: The Drew Estate BOTL Brown Label 2020 Lancero delivered some consistently good flavors through the first and last third, missing out only slightly in the last third with some imbalance. The construction was inconsistent with the first cigar having an amazing draw and good burn, and the second cigar having an average draw and good burn. I smoked two for review, and I would happily return to another, as I think Drew Estate has done well with the BOTL series over the years. Total smoking time averaged 1 hour and 44 minutes.