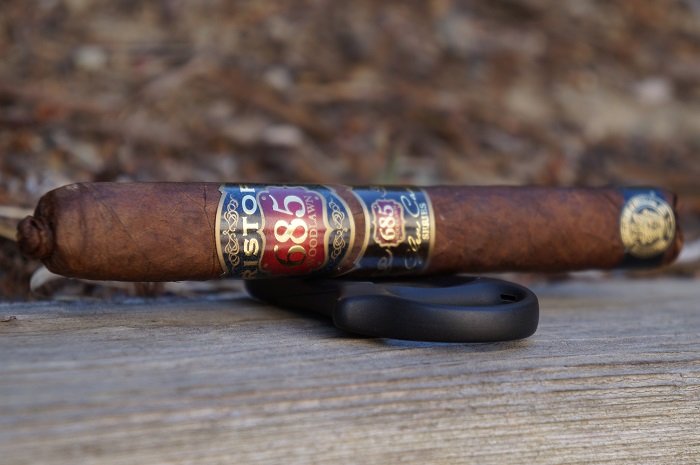 Aaron: The wrapper on the Kristoff 685 Woodlawn Box Pressed Toro TAA 2021 has a medium reddish-brown color to it with a network of fine, lightly raised veins. The seams are a bit loose while the head is finished well with a tightly wrapped pigtail bun. The foot is also covered with a fair amount of excess wrapper folded over. There are three bands, the primary being black, burgundy and gold and denoting the brand and line, the secondary having the same color combination and denoting the line and series while the foot band is black and gold and has the TAA logo on it. The aroma from the wrapper and closed foot is a mix of lightly musty wood and earth. The pre-light draw brings a nice sweet and musty aged cedar along with a mild spiciness on my lips.
Seth: From the get go, this looked like Kristoff. I think I would be more surprised if I picked up a Kristoff that did not have a closed foot and pigtail cap. The Kristoff 685 Woodlawn Box Pressed Toro TAA 2021 sports a marbled wrapper, and it has a dark Colorado and Maduro coloring. The wrapper itself is oily in texture and it is soft throughout. I am picking up notes of earth, cocoa, soft spices and tobacco.
John: The Kristoff 685 Woodlawn Box Pressed Toro TAA 2021 puts on quite the pre-light presentation. The cigar is cellophaned, with a UPC sticker that tears partially when opened. The cigar is triple banded, with the third band on the foot. For additional artisanal complications, the cigar has a twisted tail cap, a closed foot and is box pressed. For aromas, I picked up on raisin, mild mustiness, mild wood, with nothing else from the foot likely as a result of the closed design. The combination of band presentation along with artisanal complications makes this the most impressive TAA release I have reviewed to date.
Jiunn: The Kristoff 685 Woodlawn Box Pressed Toro TAA 2021 has a maduro wrapper shade. Veins are well pressed, seams tight, bunch and roll even and head well wrapped. Aromas from the wrapper give faint cedar and flowers. Nosing the foot gives the same with added red pepper spice. Cold draw tells of dry cocoa and cedar. 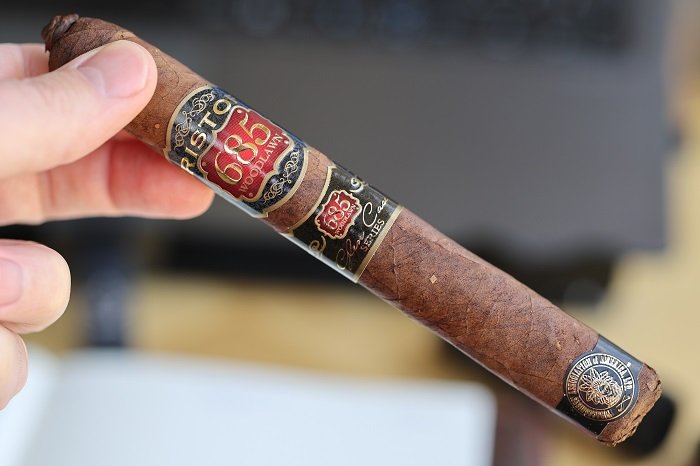 Aaron: The cigar begins with a mix of wood, black pepper and light creaminess. At a half inch in, some heavily roasted coffee joins the profile. The retrohale brings toasted wood and a mid-level black pepper zing. As the third comes to a close, the profile is toasted wood, heavily roasted coffee, black pepper and light creaminess. The strength in this third was slightly above medium.
Seth: The first third begins by delivering notes of cocoa, coffee beans, rich earth and damp wood. There are some tobacco notes present, but they are faint overall. In terms of strength and body, medium overall. Terrible burn and construction.
John: The first third begins with nuttiness, baking spices and intensified medium baking spices with wood through the retrohale. The post draw is defined with a sweet wood as the cigar progresses. Tobacco sweetness mixes with the baking spices as it settles in. Those baking spices continue to intensify, moving to full strength with a long, lingering finish. Some time later, a light-plus strength chocolate joins the retrohale.
Jiunn: The first third starts off with a blast of red pepper spice. The spice is fresh and punchy, sitting towards the rear palate and letting me know of its true strength through retrohaling. Aside from that, there’s also layers of dry cocoa and cedar. Strength and body is medium-full. 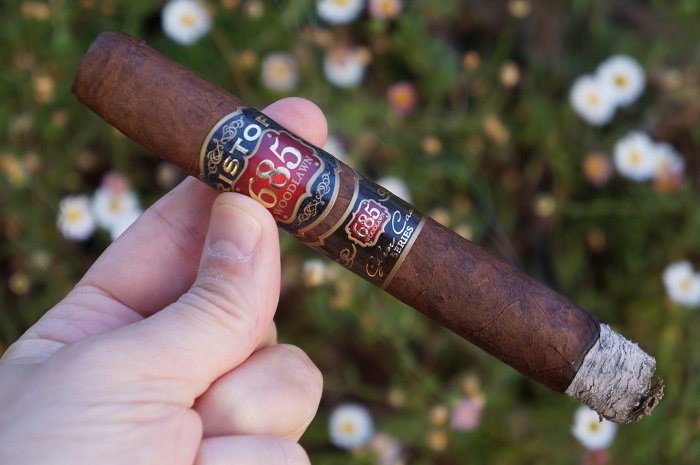 Aaron: As the second third begins, the toast level of the wood becomes very heavy and the creaminess has gone away. At a half inch in, the roasted coffee note transitions to dark earth. The retrohale remains toasted wood and black pepper. At an inch and a quarter, the dark earth now has a slight lead over the heavily toasted wood while the black pepper is a bit further behind. The strength remains at slightly above medium.
Seth: The second third was delivering a lot of the same notes from before, but I had to re-light the cigar several times and it was very soft as well. The cigar seemed soaked. Cocoa, coffee and earth. Medium body and strength.
John: The second third begins things with sweet baking spices, nuttiness and wood, with baking spices finishing into the post draw. All of the previous flavors settle into a balance of medium strength for the remainder of the second third, with no other notable changeups.
Jiunn: The second third seems to ramp up on the spices and a tad more on strength. What it unfortunately loses out on is the softer notes, such as the cocoa. What I end up with is still a nice viscous medium-full body with flavors of full red pepper, cedar and baking spices. 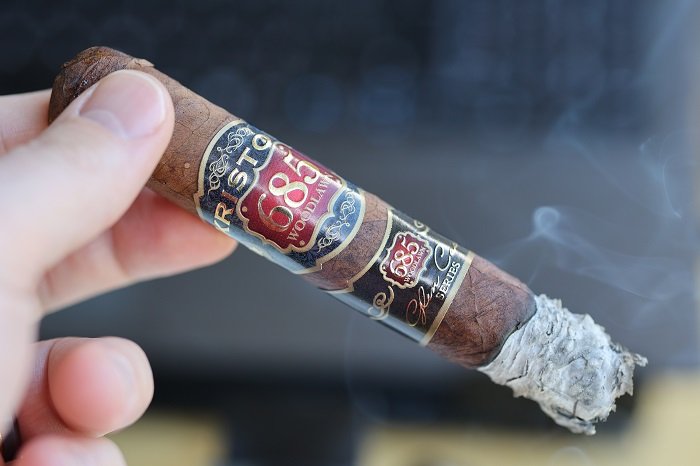 Aaron: As the final third begins, the dark earth gains a larger lead in the profile. At an inch in, the heavily toasted wood now becomes heavily charred wood. The retrohale remains toasted wood and black pepper. As the cigar wraps up, the heavily charred wood and dark earth are even up front with the black pepper in the background. The strength in this third bumped up to medium-full.
Seth: The final third was so wet, I could not finish the cigar. I could not keep the cigar lit. The little notes I got were right in line with that of the first and second.
John: Sweet nuttiness and hay move the flavor profile into the last third. Some mildly tannic cedar finishes into the post draw. Creamy baking spices, mixed with wood settle into the middle of the profile.
Jiunn: The final third becomes less spicy, leaving me with cedar and minerals with a good amount of body. Strength remains the same overall medium-full. 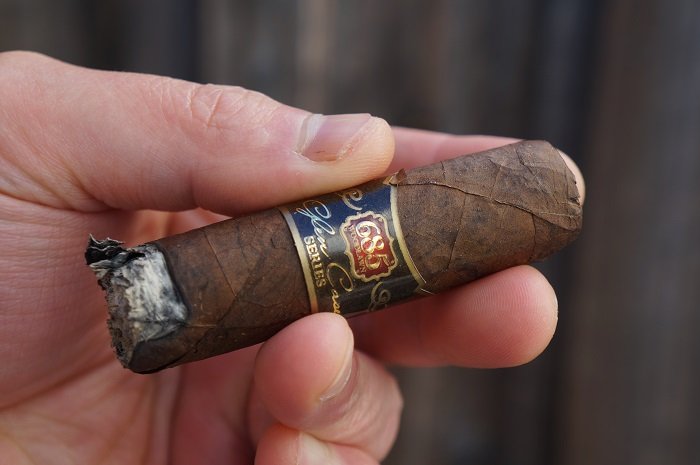 Aaron: The burn was fairly wavy throughout and the cigar went out twice, requiring re-lights.
Seth: Terrible burn throughout. Poor construction.
John: The burn became uneven by the halfway point, with sections of the wrapper not burning. That uneven burn required a single touch-up. Examining the cigar, there was some softness in the cigar near the cap.
Jiunn: Burn was great aside from very flaky ashes that fell everywhere for the entire smoking time. 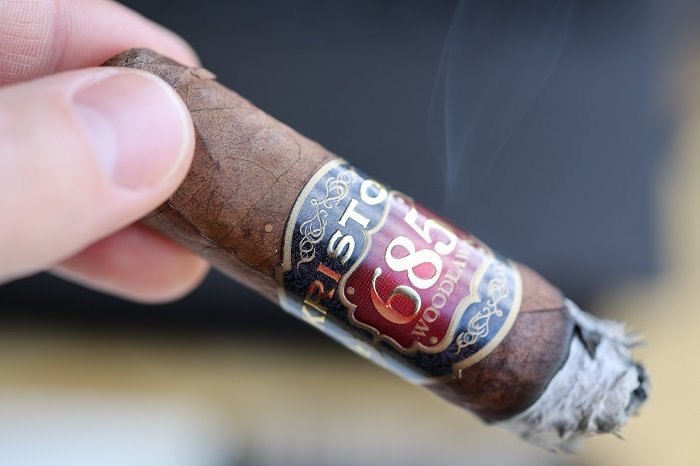