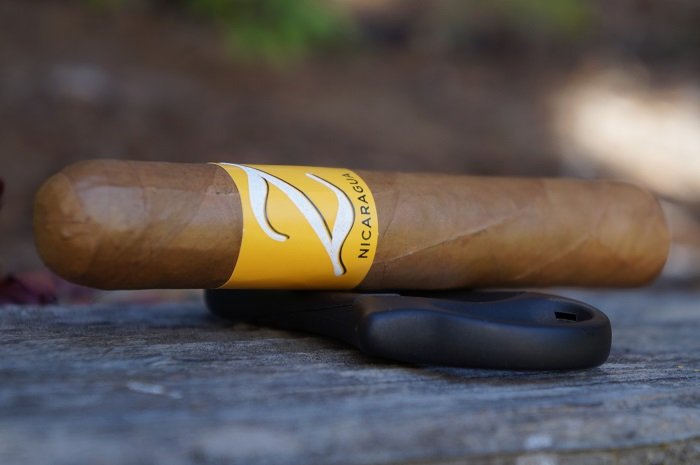 Aaron: The wrapper on the Zino Nicaragua Robusto is medium tan and has a few lightly raised veins present. The seams are smooth and the caps are well applied. The cigar is a bit heavy and seems pretty packed with tobacco. The band is yellow, white and black and has a large Z on the front above the word Nicaragua and then the brand name vertically on the back. The aroma from the wrapper is lightly sweet, dry hay while the foot brings hay, earth and mid-level spiciness. The pre-light draw brings a mix of musty hay and musty cedar along with a mild spiciness on my lips.
Seth: Finished with a dark Natural and light Colorado colored wrapper, the Zino Nicaragua Robusto sports the classic qualities that come with an Ecuadorian Connecticut. Few veins present, they are small and not noticeable. Silky in texture, I am picking up aromas of cedar and tobacco on the wrapper with cocoa, stone fruit, earth and spices on the foot.
John: The Zino Nicaragua Robusto comes in cellophane with a UPC sticker that tears in half when the cellophane is opened. The band is underwhelming and gives the impression of a bundle cigar. For aromas from the wrapper, I picked up on sweet, creamy bread and mild, fresh wood. From the foot, there was sweet raisin, and a light-plus strength tobacco.
Jiunn: The Zino Nicaragua Robusto has an even, light caramel, Colorado Claro wrapper shade. Veins are well pressed, seams tight, bunch and roll even and head well wrapped. Aromas from the wrapper give abundant barnyard and trailing cedar. Aromas from the foot tell of rich, sweet nuttiness and assertive white pepper spice. Cold draw gives plums and roasted nuts. 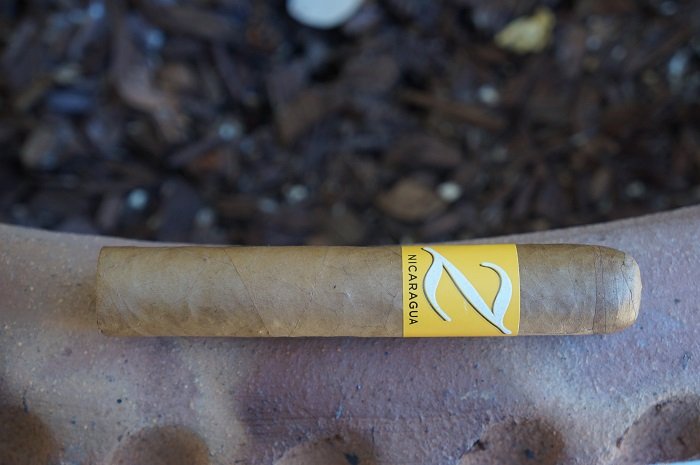 Aaron: The cigar begins with musty cedar, lightly sweet hay, earth and mild black pepper. At a half inch in, the profile is a bit dry. The retrohale is a mix of musty cedar and dry hay. As the third wraps up, the light sweetness of the hay is still hanging on as it’s even with the musty cedar. The dry earth is a little behind and the black pepper is mild in the background. The strength in this third was mild-medium.
Seth: The first third opens with some lovely spice notes that are paired with some herbal and earthy qualities. There is a dry quality to the cigar, and I am picking up some pepper as well. There are also some creamy aspects. In terms of strength and body, I would classify the cigar as a solid medium.
John: The first third starts with some mustiness, mushroom and wood with light hay finishing the draw. A light-plus strength mushroom and baking spices combine through the retrohale. As the cigar progresses, hay pushes into the main profile and leads each draw. Some time later, a mild chocolate joins the retrohale.
Jiunn: The first third has all soft notes until I retrohale. Sweet hay is front and center, with other flavors of bread, soft synthetic candy and cedar close behind. Only on the retrohale is when spice shows up, in the form of a light baking spice and black pepper mixture. The finish is the only pitfall (but a major one), as it’s incredibly drying on the palate. Strength and body is medium. 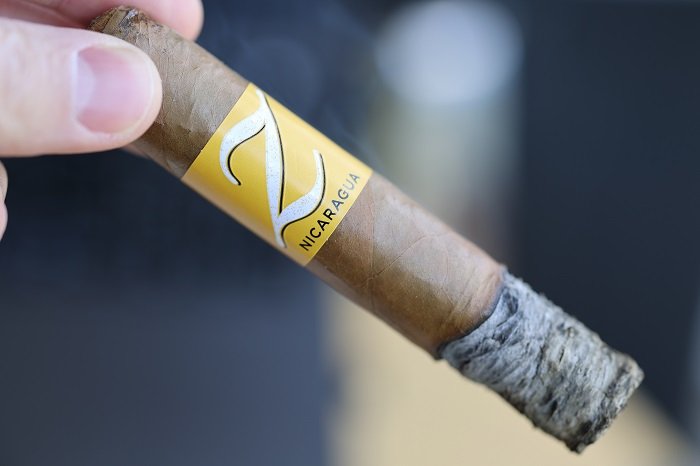 Aaron: As the second third begins, the cedar loses the mustiness and gains a toasted note. At a half inch in, the toast becomes heavier and the toasted cedar is now the lead in the profile. The retrohale is now toasted cedar and dry earth. At an inch in, the toasted cedar, hay and dry earth are all even with the black pepper mild in the background. As the third wraps up the toast note has become very heavy. The strength in this third bumped up to slightly below medium.
Seth: The second third is fairly in line with that of the first third. I am picking up some earth and cedar notes, and that is paired with some creamy qualities. There are some spice, pepper and herbal qualities present as well, and I would classify the cigar as medium in strength and body.
John: Hay and wood lead the profile into the second third, with a trailing sweet baking spice carrying into the post draw. A mild chocolate develops through the retrohale as it settles in. As the second third progresses, hay takes on some tannic quality through the finish of each draw. Light strength chocolate moves to the front of the profile in the bottom half, with hay and wood still finishing the draw.
Jiunn: The second third has no changes from the first third. It’s still medium strength and body with plenty of sweetness (sweet hay, soft synthetic candy) and following bread and cedar. The culprit is still that dominating dry finish. 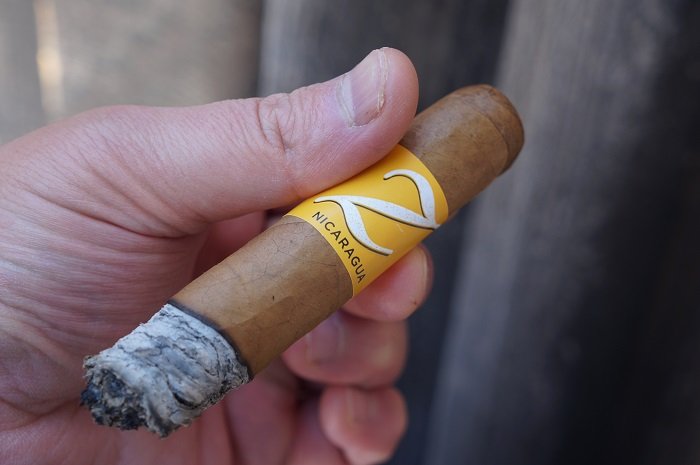 Aaron: As the final third begins, some sweetness return to the hay. The heavily toasted cedar moves back in to the lead with the lightly sweet hay and dry earth even right behind and the black pepper mild in the background. The retrohale remains toasted cedar and dry earth. At an inch in, a light mustiness rejoins the profile. As the cigar comes to a close, the profile is heavily toasted and light musty cedar up front, with lightly sweet hay and dry earth right behind and mild black pepper in the background. The strength in this third bumped up to medium.
Seth: The final third shows a continuation of the second third. I am picking up some earth, cedar, cream, pepper and herbal qualities. There is this faint lemon quality, and I would say it is medium in strength and body.
John: Hay, mixed with a mild chocolate take the Zino Nicaragua Robusto into the last third, with dry hay finishing and lingering on the post draw. As the last third settles in, hay moves up to medium strength and is driving the profile. The hay on the post draw is dominant on the palate and takes over between draws.
Jiunn: Nothing new to discuss for the final third. The overly drying finish still is the major factor. The flavors by themselves are still nice, with the same sweet hay, soft synthetic candy, bread and cedar. Strength and body finishes medium. 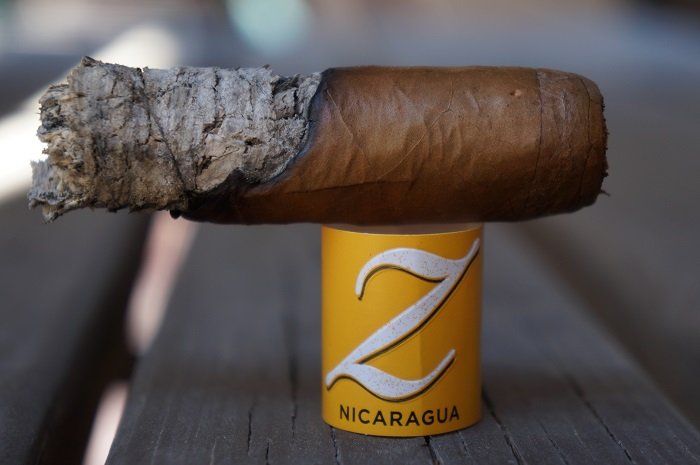 Aaron: The burn was slightly wavy at times, but never needed any attention. The ash held on to the halfway point and then again until the end.
Seth: Nice burn from start to finish. Well-constructed cigar.
John: The burn was straight throughout the review, with no attention required.
Jiunn: Burn performance was flawless. Even burn, tight ashes, cool burning temperature and ample smoke production. 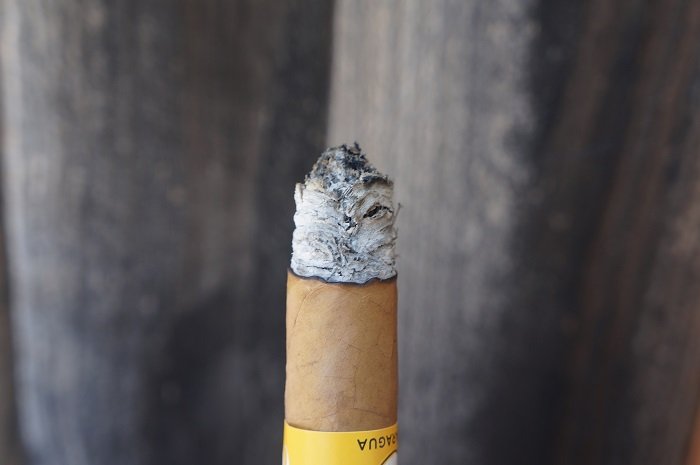 Aaron: The draw was slightly tighter than I prefer, but didn’t cause any issues with the smoking experience.
Seth: Nice draw throughout.
John: One of the worst draws on a cigar I’ve reviewed in a long time. The draw was extremely resistant, roughly 4-1/2 to 5 notches. Although you could still puff and get smoke, it was a significant distraction and impacted the overall experience.
Jiunn: The draw was also flawless, giving the ideal air flow and resistance.

Aaron: The flavor profile was fairly average throughout as it was focused around musty, toasted cedar, lightly sweet hay, dry earth and mild black pepper. Construction was very good throughout. There was nothing intriguing and nothing bad about the Zino Nicaragua Robusto. It delivered an average experience, about what I expected, based on the blend and price point. It brought a fairly typical profile for an Ecuadorian Connecticut wrapped cigar and I think this is actually a good value offering for the brand. It can definitely attract new smokers to the brand, those that like lower priced cigars and those that like lower strength offerings. I don’t necessarily see myself coming back to it, but I can see it doing quite well in the market.
Seth: Well priced, the Zino Nicaragua Robusto delivers a solid profile. The cigar is not overly complex, but there are solid flavors, and it smokes very well for the price of the cigar. It is not what comes to mind when I think of Zino, but it is a great budget friendly cigar. I understand why they are using the name Nicaragua in the cigar, helps attract modern smokers, but it is not very Nicaraguan. It is a nice multi-national blend that is wallet friendly. A very good morning cigar with coffee. Of course, I typically go for a Davidoff with coffee in the morning if I am going to have a cigar, and I don’t see that changing despite the price.
John: The Zino Nicaragua Robusto was overall a fairly average experience, delivering flavors that reminded me of Connecticut blends from decades past. I think what will attract Connecticut smokers to this line is the aggressive price point. Overall, construction was a mixed bag with a flawless burn, but a very resistant draw. Total smoking time was 1 hour and 49 minutes.
Jiunn: On paper, I was excited to review this cigar. A Zino that is at a great budget price of $6.50 can have a good amount of upside. But then again, there are quite a few Connecticut shades in the market at an attractive price, so I was wondering if Zino can come up with a finesse blend of it. After smoking the Zino Nicaragua Robusto, I was let down. The flavors by themselves were easy going and honestly quite enjoyable. But the major factor of how dry my palate felt was the stand-alone disappointment for me. I’d pass on this one and focus on the sea of other great ones out there.