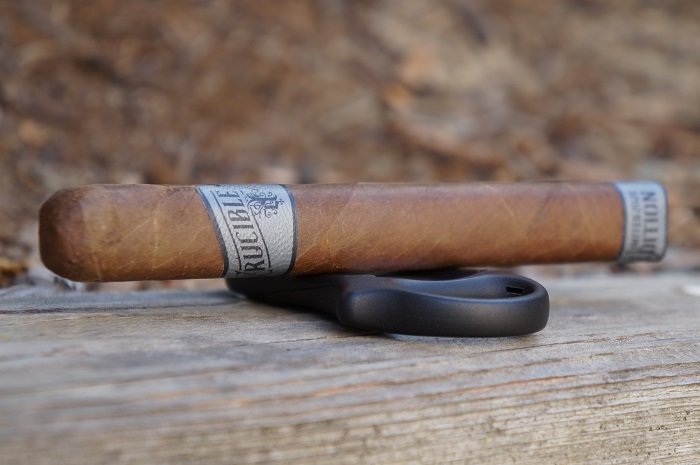 Aaron: The wrapper on the Diesel Crucible is medium brown and has some decently raised veins present. The seams are quite smooth while the head is finished fairly decently. There are two bands, both carrying some texturing and a gray and black color combination. The primary band denotes the brand and line while the foot denotes Limited Edition and the year. The aroma from the wrapper is a mix of earth and cocoa powder while the foot brings musty wood, tobacco sweetness and a bit of spice. The pre-light draw brings musty wood and light earth, along with a mild spiciness on my lips.
Seth: Oily and nicely pressed, the Diesel Crucible sports some tooth and medium sized veins scattered throughout. The coloring is that of classic Colorado, and it is very redwood in coloring. The foot is giving off aromas of strong tobacco, black pepper, barnyard and wood, while the wrapper is giving off notes of cinnamon, leather and dry earth.
John: The Diesel Crucible doesn’t hold back in the pre-light experience. The cigar is cellophaned, with a UPC sticker that tears but remains largely intact. For bands, there is a primary band, along with a foot band, and the cigar has a box pressed complication to it. Aromas from the wrapper included sweetness, spices, cedar and raisin. From the foot, there was wood, sweet mustiness and tobacco.
Jiunn: The Diesel Crucible has an even, almost Colorado Red tint to the smooth wrapper. Veins are well pressed, seams tight, bunch and roll even and head well wrapped. Aromas from the wrapper tell black tea, cedar and hay. Aromas from the foot give aggressive white pepper and cedar shavings. Cold draw reveals cardboard and dried nuts. 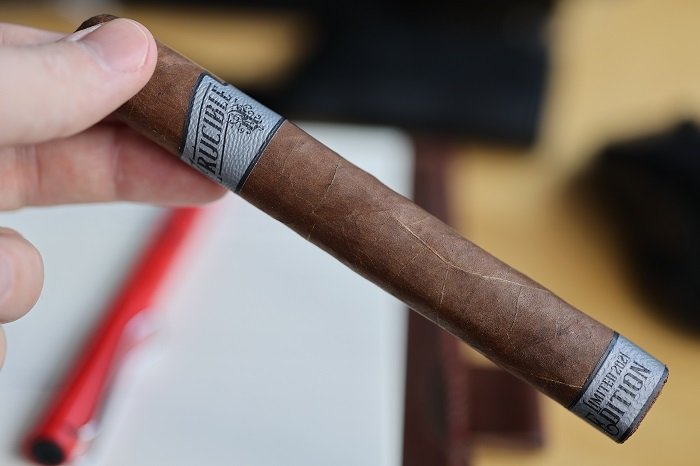 Aaron: The cigar begins with toasted wood and a bit of a bright pepper note. At a half inch in, there’s a light bitterness that has become present. The retrohale is toasted wood and black pepper. As the third comes to a close, a light mustiness joins the profile of toasted wood, bright pepper and light bitterness. The strength in this third was right at medium.
Seth: The first third opens with some lovely pepper notes, and there is this sweet Asian spice quality present as well. I am picking up some cinnamon flavor and it is paired with dry earth, coffee and leather. There are some soft cream and oak notes, and they are on the finish. I would classify this cigar as medium-full.
John: The first third gets things going with earth, leather and a medium-plus blast of black pepper. The finish is largely composed of a dry, leather and earth combination. I find the main profile muted, lacking depth. Some creaminess pushes into the profile as it settles. Light sweetness comes through the retrohale as the cigar progresses. Some time later, lingering black pepper at medium strength sits on the post draw. Some light chocolate attempts to add an interesting note by the 15 minute mark.
Jiunn: The first third gives plenty of spice and earth. An abundance of white pepper seems to build the more I smoke the cigar. Further, Chinese five spice and cedar. Retrohaling gives more depth in white pepper and shows baking spices. The finish is very long, having the white pepper and cedar layering the entire tongue. Strength is medium-full, body is medium. 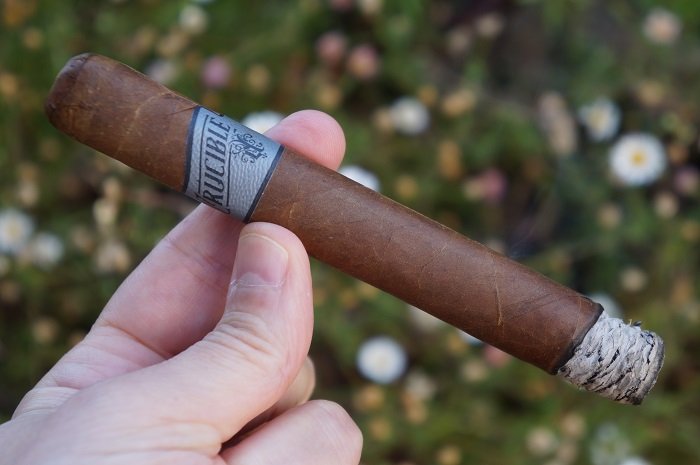 Aaron: The second third is a continuation of the toasted wood, bright pepper and light bitterness and mustiness. At a half inch in, the brightness of the pepper has departed and it is now a mild black pepper in the background. The retrohale is now toasted wood, mustiness and light black pepper. At an inch in, the profile has become a bit dry. The third wraps up with toasted, musty wood with light black pepper and bitterness in the background. The strength remained at medium.
Seth: The second third delivers a flavor profile of dry earth, peppery spices, cinnamon, leather and mineral notes. There is this faint metallic quality on the finish. In terms of strength and body, I would classify the cigar as medium-full.
John: Light-plus strength leather and wood moves the cigar into the second third. The black pepper that was so intense through the first third retreats down light. The retrohale is composed of light plus syrupy sweetness, along with baking spices. As the second third settles in, a mild, dry wood takes up the post draw. Mild earth joins the post draw not long after.
Jiunn: The second third settles down a bit. There’s still plenty of white pepper, cedar and Chinese five spice, but it’s melding better. There is an oily texture to the spice levels now, which is a nice welcoming change. Strength and body remains medium-full and medium, respectively. 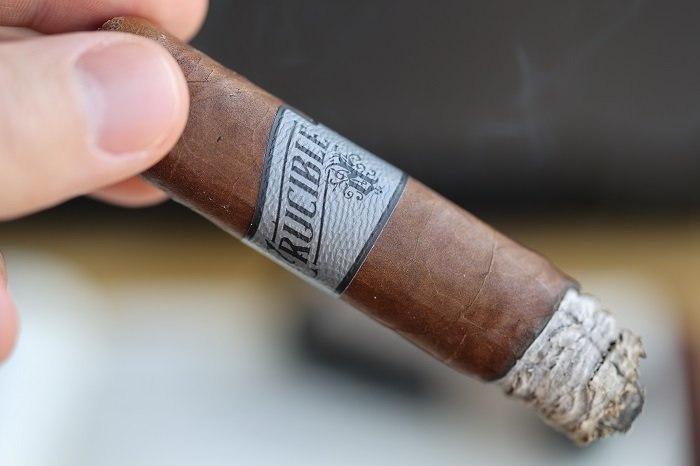 Aaron: As the final third begins, the bitterness picks up a bit to move into the middle of the profile between the toasted, musty wood and light black pepper. The retrohale remains toasted wood, mustiness and light black pepper. At an inch and a quarter, the toast becomes pretty heavy for the musty wood while the bitterness remains a bit behind and the light black pepper is in the background. The strength in this third bumped up to slightly above medium.
Seth: The final third has a strong profile, and I am picking up peppery notes with dry earth and metallic qualities. There are some leather qualities present as well, and the finish is that of cocoa powder and coffee bean. Full in strength and body.
John: Dry wood, along with mild mustiness takes the review into the last third. Earth settles into the post draw. As the last third progresses, earth pushes into the middle of the flavor profile.
Jiunn: The final third continues to blend better with the mixture of white pepper, cedar and Chinese five spice. What really pulls it away in this third is having more softer notes in the form of roasted nuts. Strength and body is unchanged at medium-full and medium. 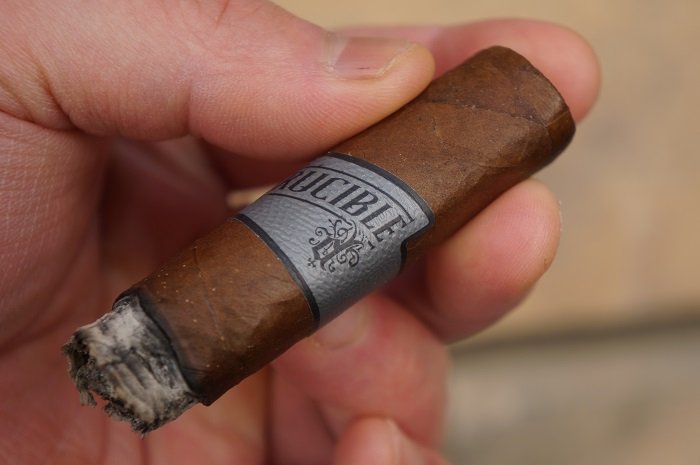 Aaron: The burn was slightly wavy at times, but never needed any attention. The ash held on in inch and a half increments.
Seth: Great construction from beginning to end.
John: Two cigars were smoked for review, and both cigars had consistent burn experience with no intervention required.
Jiunn: Superb burn performance. Even burn, tight ashes, cool burning temperature and ample smoke production. 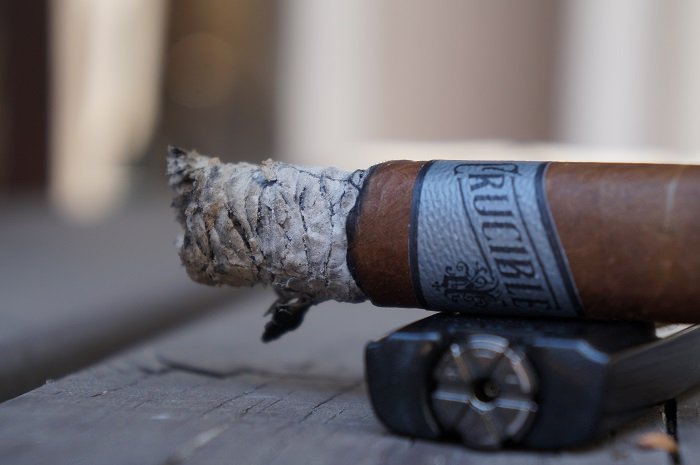 Aaron: The draw was perfect, with just the right amount of resistance that I prefer.
Seth: Perfect draw.
John: Two cigars were smoked for review, and both cigars had a consistent draw experience at 1-1/2 to 2 notches into the resistant spectrum.
Jiunn: Superb draw as well. The best balance of air flow and resistance.

Aaron: The cigar seemed a bit young as the pepper started bright along with a light bitterness that ran through the profile and built up in the final third. Construction was great and allowed me to just focus on flavor. The Diesel Crucible was fairly average throughout and then dropped down a level in the final third as the bitterness and toast levels increased. Not a great experience and I doubt that I would return to this one.
Seth: The Diesel Crucible is a solid cigar and a strong one at that. It is not my cup of tea, due to the strength, but it is right in line with the Diesel brand and a cigar I could enjoy from time to time. This is an evening cigar for me. I did enjoy enjoy the dryer qualities and spices that came with that, and the cinnamon notes were enjoyable. The construction and draw were fantastic throughout.
John: Two Diesel Crucible cigars were smoked for review and I found both to be very consistent in the average flavors presented. The largely leather and earth forward flavors didn’t interest or engage me, and after smoking two Crucibles, I think there are a number of other Diesel offerings I’d reach for first. The construction was also very consistent, with no construction issues and only some mild resistance to the draw. The average smoking time was 1 hour and 35 minutes.
Jiunn: I don’t exactly recall what the original Diesel Crucible was like back in April 2012, but of the little I remember, it was a stronger cigar with a good amount of spices. Although not a fair comparison, after the review, I lit up an original Crucible, and it tasted fairly mellow. But any cigar aged for 9 years will become more mellow. For the new release Diesel Crucible, it packed a good punch of rich spice and earth. It tasted like your classic AJ style of blends but with elevated spice and strength. If that’s your thing, this is it.