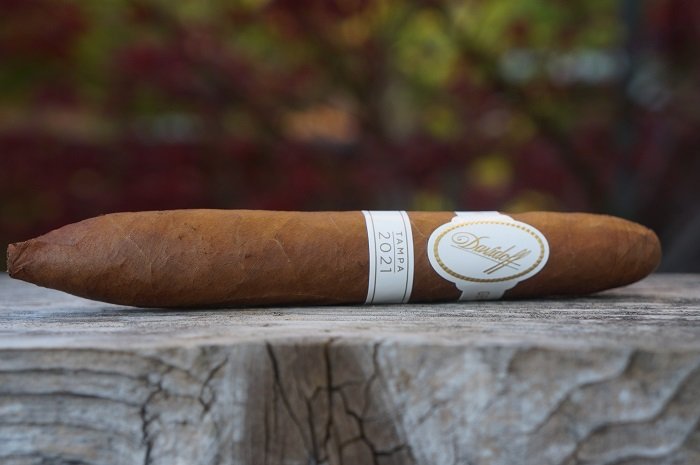 Aaron: The wrapper on the Davidoff Tampa Exclusive 2021 is light brown and has a fine lumpiness to it along with a couple of slightly raised veins. The seams are hard to see but are slightly raised and the caps are decently applied. The cigar seems very light for its size. There are two bands, with the primary being the traditional white label and the secondary strip band carries the same color combination and designates Tampa 2021. The aroma from the wrapper is a very musty hay and the foot has such a small opening, that there’s nothing additional to report from there. The pre-light draw brings a raw cedar note along with a sweetness that is hard to place. There’s also a bit of spiciness on my lips and tongue.
Seth: A nice figurado, the Davidoff Tampa Exclusive 2021 sports a wrapper that is Colorado in coloring. Antique furniture wood coloring. It has some small to medium sized veins throughout and the wrapper is silky in texture. There is a nice firmness, and the wrapper is giving off an aroma of mushrooms, barnyard, barbeque and spice.
John: The Davidoff Tampa Exclusive 2021 is cellophaned and has a UPC sticker with a tear point that leaves the UPC code intact when opened. The cigar is double banded, with the secondary band indicating simply “Tampa 2021”. It is also in a perfecto shape, which adds a nice limited vitola nature to the release. For aromas from the cigar, I was able to pick up on bread, sweet wood and tobacco. Due to the perfecto shape, only a very small part of the foot was open, making it difficult to pick out any specific aromas.
Jiunn: The Davidoff Tampa Exclusive 2021 has an exquisite and classy look. Even shade of Colorado Claro, bunch and roll uniform, veins well pressed and seams tight. Aromas from the wrapper give jammy prunes and hay. Cold draw gives hay, nuts and bread. 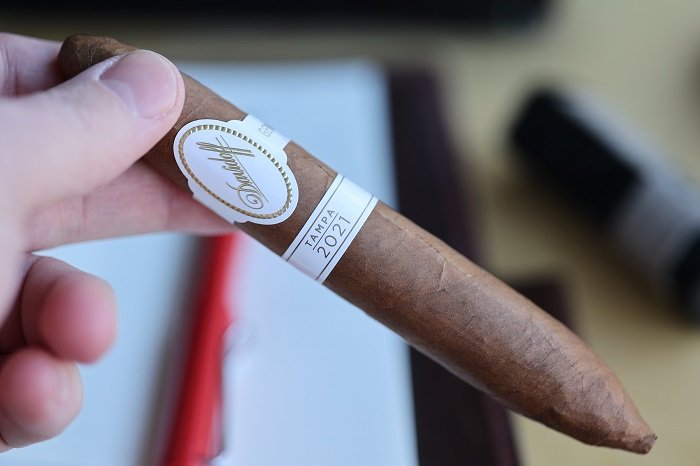 Aaron: The cigar begins with cedar, mushroom mustiness and mild black pepper. At a half inch in, the cedar gains a slight toast. The retrohale is a light mix of mushroom mustiness and cedar. At an inch and a quarter, the toast picks up a bit more as the black pepper has faded away. The strength in this third was mild-medium.
Seth: Right out of the gate, the Tampa Exclusive 2021 deliver flavors of toast and black pepper. There is some hay, barnyard, dry clay, and cedar as well. Lots of spice present with the cigar, and the focus is that of red and black pepper. There are creamy and coffee notes as well, and the cigar smokes at a medium-full level for strength and body. It is showing some Davidoff qualities at a super high strength and body; and not just for a Davidoff.
John: The first third opened with bread, cedar and faint sweetness. There are enjoyable baking spices that join after a few puffs on the retrohale. By the halfway point, creamy graham cracker has joined the profile.
Jiunn: The first third is about nuances. I realized if I don’t slow down my draws and pay attention, I miss out on the nuances. There’s baking spices, bread and dried sweet cherries. Retrohaling brings white pepper spice into the fold. The finish is soft but lingers for a decent amount, giving a bready character. Strength and body is medium. 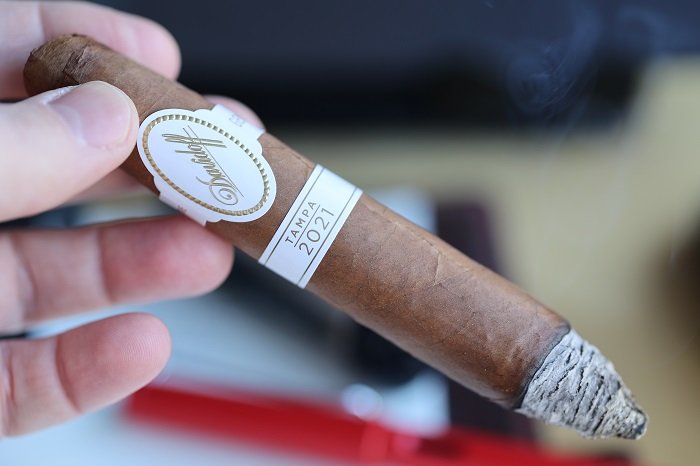 Aaron: As the second third begins, the profile of toasted wood is flirting with being described as stale while the mushroom mustiness is slightly behind it. The retrohale has become a fuller mix of mushroom mustiness and cedar. At an inch and a half in, the toasted cedar has tipped the scale into stale territory. The strength in this third remained mild-medium.
Seth: The second third shows some transitioning from the first. The woody note has become more prominent, and it is paired with some hay and nutty traits. There is this peanut butter flavor present, the finish is of coffee and cream. There are touches of pepper spices, but they are on the finish. Unlike the first third, this is more medium in strength and body.
John: Graham cracker and cedar move the cigar into the second third. There is lingering light cedar on the post draw. By the halfway point, mild citrus takes up home in the middle of the profile.
Jiunn: The second third’s flavors become fuller, but the complexities take a downturn. At this point, it’s mainly about baking spices and cedar. The dried sweet cherries and bread notes are entirely gone. Retrohaling stands to be the best part, as it’s a nice pepper blast. Strength and body remains medium. 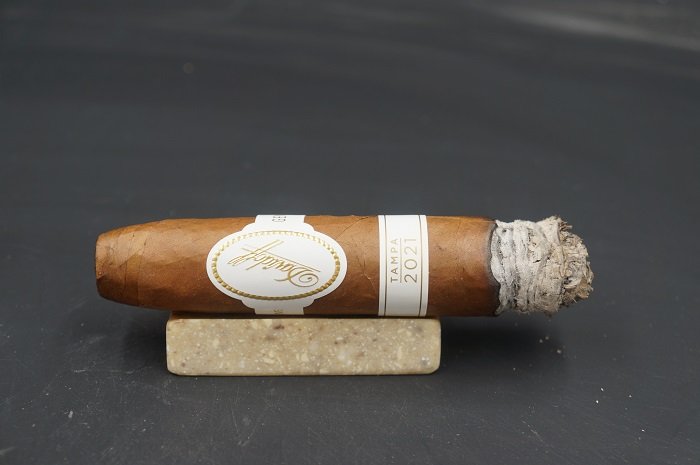 Aaron: As the final third begins, the mushroom mustiness has become very faint while the toast level on the cedar has become a bit fuller and lost the stale component. At a half inch in, a slight bitterness joins the profile. The retrohale is now just a heavily toasted cedar. At an inch in, the toast has transitioned to a light char and the bitterness has increased. The strength in this third bumped up to slightly below medium.
Seth: The final third delivers more transitioning, and I am picking up some Chinese Five Spice with cream and coffee notes. There are anise and cinnamon notes, and they are paired with black pepper qualities. I am getting some dry wood notes as well, and the finish is smooth with tobacco and leather. Like before, medium in strength and body.
John: Chocolate and graham cracker through the retrohale for the first few puffs of the last third. There is still mild cedar on the post draw. As the cigar progresses, bread notes join the retrohale.
Jiunn: The final third gives the same experience as the second third. Medium body and strength with flavors of baking spices and cedar. 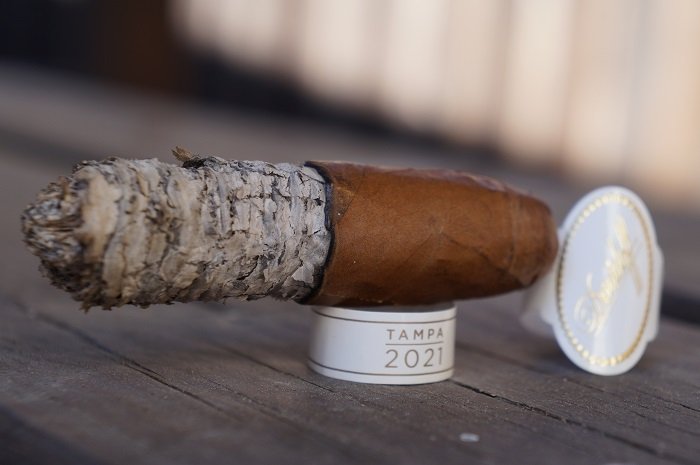 Aaron: The burn line was straight the entire way and the ash held on in near two inch increments.
Seth: Great burn from beginning to end. Well made perfecto.
John: The burn was straight through the review, with the ash holding on up to 1-1/2 inch increments. I did observe that the cigar was burning very quickly.
Jiunn: Flawless burn performance. Even burn, tight ashes, good smoke production and cool burning temperature. 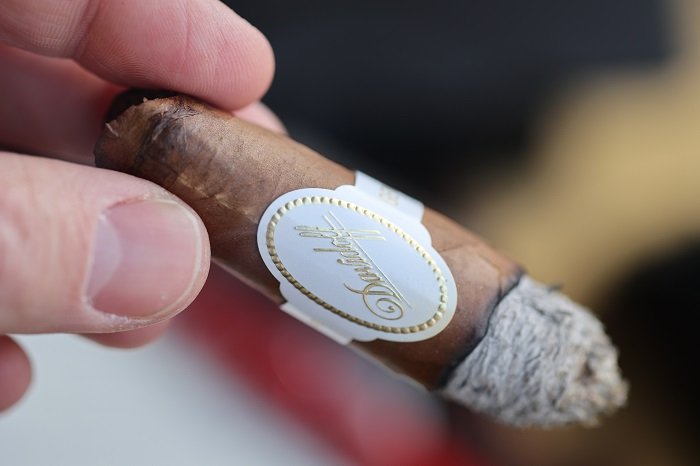 Aaron: The draw was fairly loose, likely due to being underfilled, and I had to temper my draws to prevent overheating the cigar.
Seth: Almost perfect. One of the best, consistent draws I have had on a figurado.
John: The draw was initially about 1 notch resistant, but landed right in the ideal zone of resistance once the cigar got going.
Jiunn: Perfect draw performance. The best air flow and resistance.

Aaron: From the moment I pulled the cigar from the humidor and felt how light it was, I had a feeling on what the experience would be like. What that experience was, was a good, traditional Davidoff flavor profile that was going to struggle with a fast burn and loose draw and that’s pretty much how the Davidoff Tampa Exclusive 2021 can be summed up. The first third was good, but as the cigar progressed, the loose draw and fast burn took their toll and produced a degrading flavor profile. While the experience I had, likely would be satisfactory or above to an occasional smoker looking to splurge, it was a bit disappointing for me. I’d be very interested in seeing what the experience would be like in a properly filled cigar and I’m hoping the others can report on that experience. While the high price point would temper me revisiting this, if others can report a good flavor profile with proper construction, I may come back to it.
Seth: I was really pleased with the Davidoff Tampa Exclusive 2021. A very good cigar from start to finish. I think the only thing I would like to see different is the vitola. Nothing against the figurado, but I would have loved to see this in something different. The flavors of cedar, cream, coffee and spice throughout were fantastic. It delivered those classic Davidoff flavors that you would get in the Anniversario or Signature, but with a lot more strength. It made me think of a lighter version of the Davidoff Chef’s Edition 50th Anniversary.
John: Overall, I reviewed the Davidoff Tampa Exclusive 2021 as average but I am thoroughly disappointed. The flavor profile was quite mild, even for a Davidoff, with the first third providing the most complexity and flavor engagement. This cigar smoked faster than any perfecto I’ve ever reviewed in this size, at last 30 – 40 minutes faster than it should have. Given the premium price point, and exclusive nature of the release, I expect more from Davidoff. Both the burn and draw were excellent, fitting a premium Davidoff release. Total smoking time made me think I was one with the SpeedForce at 1 hour and 29 minutes.
Jiunn: The Davidoff Tampa Exclusive 2021 is the type of cigar that borderlines between nuance and tasty or one dimensional. The first third was nuance and tasty, delivering balance of sweet, spice and earth. But the majority of the cigar was one dimensional in earth and spice, being average and at times passable. While the burn and draw was perfect, it’s hard to stomach a near $30 cigar that tastes overall one dimensional.