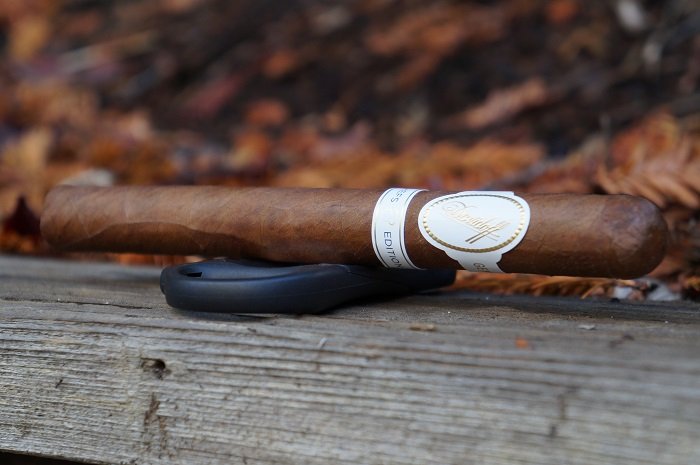 Aaron: The wrapper on the Davidoff Chefs Edition 2021 is medium brown and has a few decently raised veins and a network of fine veins. The seams are very smooth and the caps are decently applied. There are two bands, both carrying a white and gold color combination. The primary is the traditional white label design and the secondary strip band denotes the line. The aroma from the wrapper is musty, toasted, slightly sweet hay while the foot brings musty wood and mild pepper. The pre-light draw brings a very musty cedar along with a mild spiciness on my lips.
Seth: I find that the white and gold band is not enough anymore. I need a pretty wrapper with my Davidoff. Nice Colorado coloring, antique brown, with small to medium sizes veins located throughout the Davidoff Chefs Edition 2021. Firm to the touch, the cigar has a fine grit texture. Aromas of raisins, earth, tobacco, spices and wood.
John: The Davidoff Chefs Edition 2021 comes in cellophane, and has a UPC sticker with an integrated tear point that leaves it intact when the cellophane is opened. The cigar is double banded, with a ‘The Chefs Edition’ as the secondary band. For aromas, I was picking up on sweet bread, and some very aromatic wood. From the foot, there was sweet hay and wood.
Jiunn: The Davidoff Chefs Edition 2021 looks per usual, classy and refined. Oily Colorado Maduro wrapper with well pressed veins, tight seams, even bunch and roll and head well wrapped. Aromas from the wrapper give barnyard, black tea and cedar. Aromas from the foot tells strong white pepper and rubber. Cold draw gives dried nuts, black pepper and cedar. 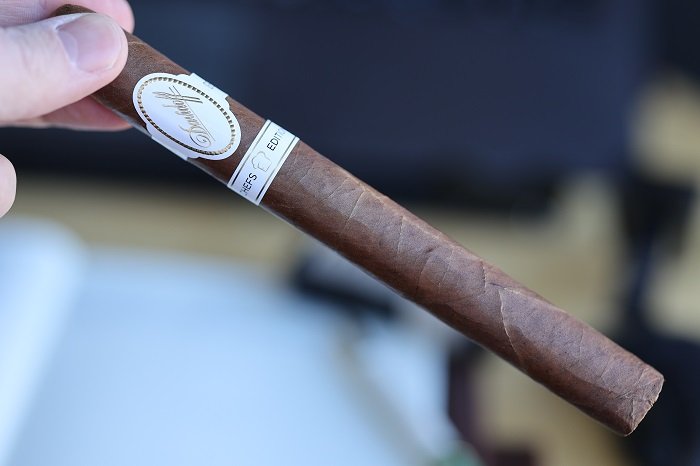 Aaron: The cigar begins with musty cedar and a sharp baking spice/black pepper combination. At a half inch in, the spice/pepper combo loses its sharpness, but it is still bold. At an inch in, the baking spice drops out as the black pepper is what teams up with the musty cedar which has now gained a light toast. The retrohale is musty, toasted cedar with mild black pepper. At an inch and a half in, the black pepper has lightened up quite a bit. As the third comes to a close, the profile is musty, toasted cedar and mild black pepper. The strength was right at medium.
Seth: The first third starts out with a dry wood and earth profile that is paired with some red pepper spices, cream and leather. Balanced overall with a strength and body just above medium.
John: My first few puffs are flavors of subdued sweet wood, medium-full strength baking spices and lingering wood with red pepper flake into the post draw. By the 20 minute mark, some light bread moves into the retrohale. There is a creaminess on the retrohale developing that I would describe as a white sauce if it had no pepper and salt seasoning. As the cigar progresses, some mild citrus peel comes through on the retrohale. Dry cedar is present on the post draw in the bottom half.
Jiunn: The first third presents a savory profile that has a good medium plus heft to the body. Flavors consist of celery seeds, cedar, leather, dry dirt and nuts. Retrohaling intensifies the celery seeds and highlights black pepper spice. The finish is short, with cedar. Strength is medium-full. 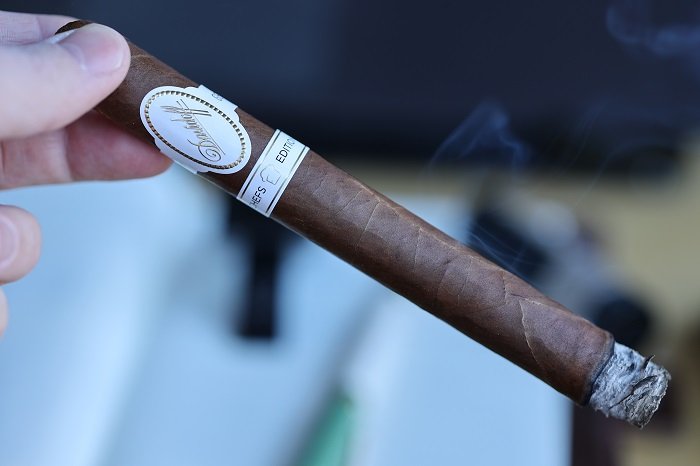 Aaron: As the second third begins, the mustiness picks up in fullness. At an inch in, the profile is musty, toasted cedar with mild black pepper. The retrohale is a mirror image. At an inch and a half in, the black pepper picks up. At an inch and three quarters, the toast level becomes pretty heavy. The third wraps up with musty, heavily toasted cedar with black pepper right behind, The strength bumped up to slightly above medium.
Seth: The second third delivered this dry wood and Café au lait qualities. Touches of cream, coffee and even some nutmeg. Like before, earth notes with leather and tobacco. Just above medium in strength and body.
John: Bread and mild wood on the retrohale going into the second third. Mild citrus takes hold in the center of the profile as it progresses. Some time later, mild, dry wood develops on the post draw. In the bottom half, baking spices and earth combine as it heads towards the last third.
Jiunn: The second third introduces an astringent leather, which creates a lower enjoyment level. No more celery seeds, but plenty of earthiness in cedar and dry dirt. Strength and body remains medium-full. 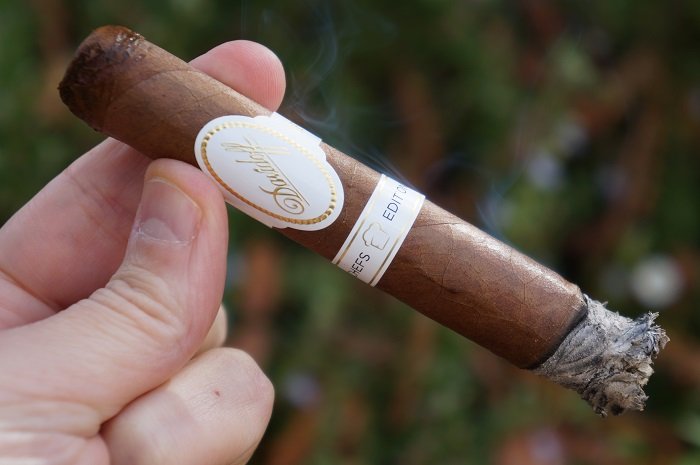 Aaron: As the final third begins, the overall profile is a bit dry and a light vegetal note joins the profile. At a quarter inch in, some dry earth joins the profile. The retrohale is musty, toasted cedar and a vegetal note. The cigar wraps up with musty, heavily toasted cedar, with dry earth and black pepper right behind and light vegetal note in the background. The strength remained at slightly above medium.
Seth: The final third delivered that nutmeg, pepper, wood, leather and earth profile. Fairly dry, but balanced. Not a wowing finish, and I am missing the cream qualities. Like before, medium in strength and body.
John: Bread, citrus, earth and wood all combine in the last third, with a lingering dry earth on the post draw. Medium strength baking spices and earth combine into the center of the profile as it settles in. Dry cedar mixes with the earth on the post draw as it progresses. By the halfway point, earth is driving the profile.
Jiunn: The final third still holds the same astringent leather and also introduces a spicy raw cedar. Still the same enjoyment level as the second third though. Strength and body finishes the same medium-full. 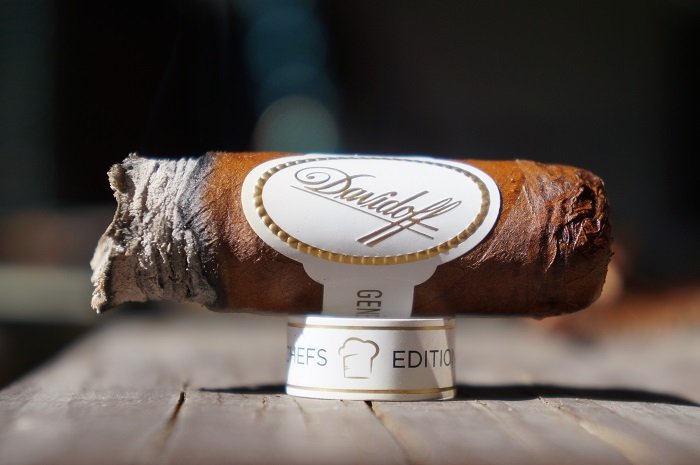 Aaron: The burn line was straight throughout, but the cigar did go out once in the second third, requiring a re-light. The ash held on in one inch increments.
Seth: Nice burn from start to finish. Not perfect, but well done.
John: The burn was fairly flawless, with occasional sections of wrapper slow to burn, that self corrected. Ash drops at 3/4 inch increments.
Jiunn: Great burn performance. Even burn, solid ashes, cool burning temperature and ample smoke production. 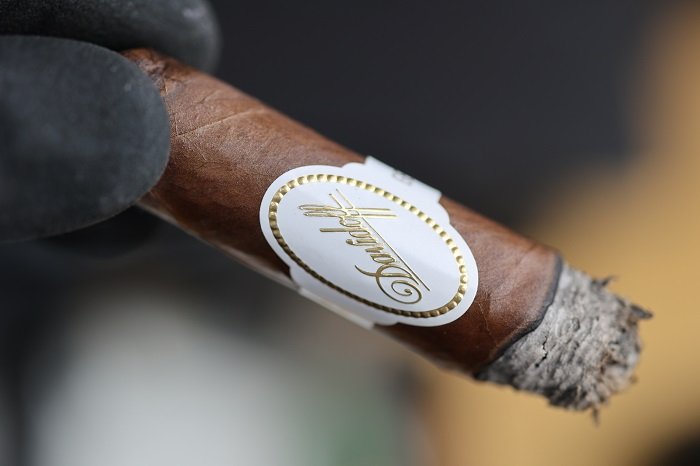 Aaron: The cigar began with musty cedar and a baking spice/black pepper combination that settled into just black pepper a bit later. The cedar gained a toast note which built up as the cigar went along. Some dry earth and a vegetal joined in the final third. The Davidoff Chefs Edition 2021 was a bit of a disappointment as the flavor profile wasn’t all that interesting. I was expecting a lot more from the group that was involved in putting this together. Couple that with the extremely high price point and this is an easy pass.
Seth: I love Chef Boyardee; but if you charge me a high premium for a can of Chef Boyardee I may have to pass. I am not saying the Davidoff Chefs Edition 2021 is in that category, but with a cigar priced at $39.00, you need to do a lot more than this to score well. I enjoyed the flavor profile, and and I love the Churchill vitola, but I have problems with where this cigar is and what it was priced at. There was little transitioning and overall complexity. You can’t do that with a Churchill. Davidoff could make legitimate arguments that I do not know what I am talking about, and that the palates of Michelin chefs from around the world would disagree with my assessment. That would be more than than fair. But, I would ask them if they have ever spent $2.00 on a can of Chef Boyardee Beefaroni and a single Honey Berry Backwoods. Money well spent.
John: The Davidoff Chefs Edition 2021 was my first time smoking a Chefs Edition from Davidoff, and I’ve come away puzzled at the flavors presented in this project. Based on the detailed pageantry underneath this cigar, I was hoping for at least a reasonably complex medley of flavor delivery, if not a candidate for top 10 cigar of the year. While the first third was certainly interesting, I was certainly expecting it to perform above a ‘Good’ rating. The rest of the cigar was a pleasant combination of flavors that fell short for a $39 MSRP cigar. While it come across as overly critical, I think that if you’re going to put out a cigar with a super premium price point, the expectation in my mind is a cigar with a minimum flavor performance of “Good”, with a hope of achieving “Amazing”. This cigar was not that. The burn performance was fairly flawless, the draw was a bit on the resistant side, although it didn’t appear to negatively impact the review experience. I find myself repeating this so often I might have to copy and paste it in the future; While the cigar was pleasant to review, this isn’t something I would return to based on the MSRP. Total smoking time was 2 hours and 20 minutes exactly.
Jiunn: For being high priced at $39 and especially bearing the Davidoff brand name, the Davidoff Chefs Edition 2021 was a disappointment. The astringent leather stayed on my palate hours after smoking the cigar. Not even food helped the matter. I know Davidoff can and should do better than this. I will not be back for more.