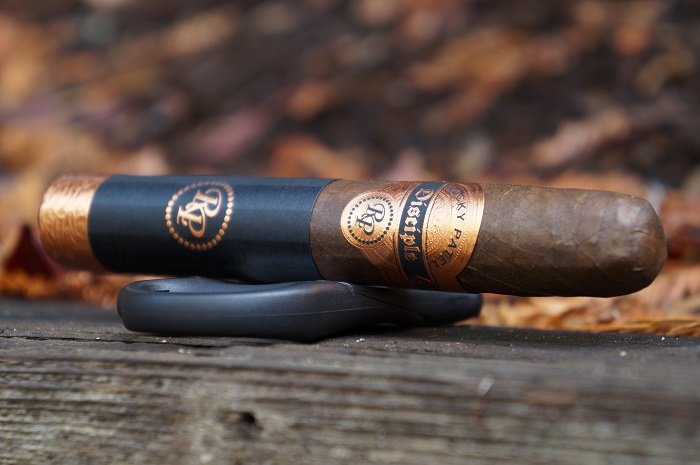 Aaron: Initially what you see are the copper and black bands as they cover more than half of the Rocky Patel Disciple Bala. The primary band denotes the company and line while the sleeve below has the company logo. The sleeve actually hides the unique shape of this vitola as the ring gauge increases from the head to the foot and is finished with a closed bulb. The wrapper is dark brown and has some decently raised veins present. The seams are a bit raised, but the caps on the head and foot are very well applied. The aroma from the wrapper is a mix of wood, earth and lightly roasted coffee. No pre-light draw as the foot is sealed, but there is a mild spiciness on my lips from the wrapper.
Seth: This is a funky vitola. I’m not sure what to make of the foot/head. The punch just confuses me. Wrapper is not impressive, faded maduro coloring. It has a marbled chocolate color. Smooth in texture, the Rocky Patel Disciple Bala sports small veins throughout. Aromas of rich earth, sweet spices and pepper.
John: The Rocky Patel Disciple Bala has all the characteristics of a high end premium cigar. The cigar is cellophaned, with a UPC sticker and integrated tear point to leave it intact. It has a primary band, and a paper wrap with the Rocky Patel logo. Additional complications included a semi-closed foot, leaving what appeared to be a punch sized hole. Aromas from the cigar included barnyard and cedar. From the foot, despite the semi-closed nature, I was able to pick up on sweet tobacco, barnyard and mild wood.
Jiunn: The Rocky Patel Disciple Bala unique shape makes it balla. Wrapper has an oily Colorado Maduro shade. Veins are well pressed, seams tight and bunch and roll even. Aromas from the wrapper tell peat and campfire. The foot gives assertive white pepper spice. Cold draw reveals cedar and chocolate shavings. 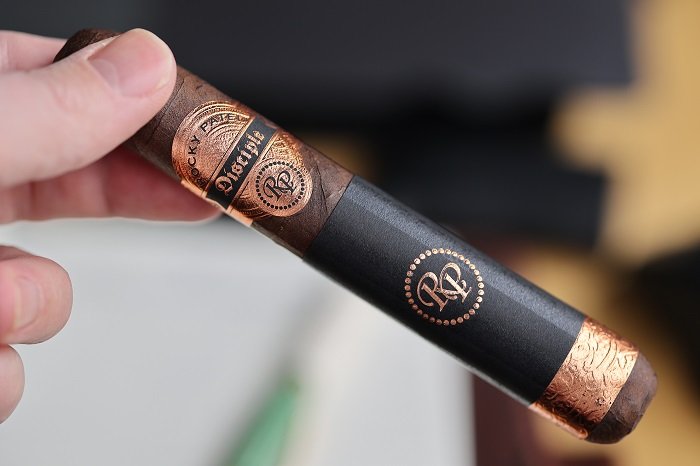 Aaron: The cigar begins with lightly musty oak, earth and potent baking spice. At a half inch in, the baking spice transitions to black pepper. At three quarters of an inch in, a toasted cedar note appears on random draws. The retrohale is musty oak, toasted cedar and black pepper. At an inch in, the black pepper has lightened up a fair amount. As the third comes to a close, the lightly musty oak and toasted cedar are up front with earth in the middle and black pepper in the background. The strength in this third was right at medium.
Seth: The first third opens with a rich earth profile that is paired with espresso beans. There are touches of cocoa and leather present as well, and a slight bit of lemon pepper on the finish. Very earthy and chewy. Medium-full in body and strength.
John: The first third gets the profile started with a musty sweetness, baking spices that immediately build in intensity and a combination of earth and baking spices through the retrohale to finish into the post draw. As the cigar progresses, chocolate joins the retrohale, as the profile becomes dark and roasty with elements of espresso. Powdered cocoa moves into the middle of the profile, as the intensity of the earth on the post draw increases.
Jiunn: The first third is insanely creamy. A medium plus body that is almost whole milk consistency. With this milkiness also comes baking spices. The flavor combination is actually quite odd, because it doesn’t pair well together. Retrohaling brings a much needed hint of spice (black pepper). The finish has that same milk coming through. Strength is medium. 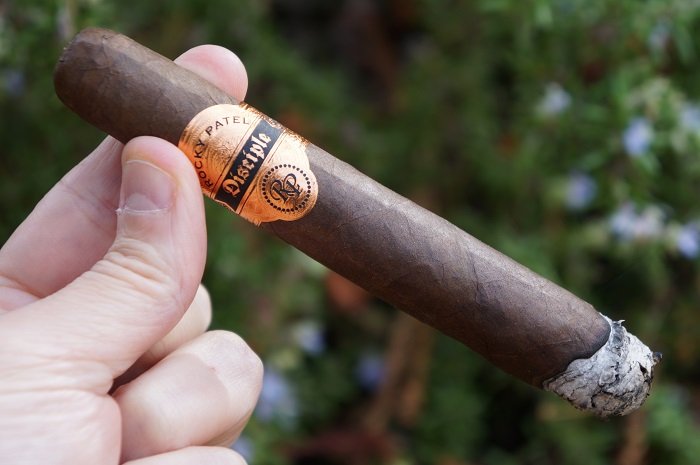 Aaron: As the second third begins, the earth is even with the oak and cedar. At a half inch in, the overall profile has become a bit dry while the black pepper has increased a bit. The retrohale is a mirror image of the mouth draws. As the third wraps up, the mustiness increases as the musty oak, toasted cedar and dry earth are even, with the black pepper being a bit dull and not too far behind. The strength in this third remained at medium.
Seth: The second third delivers a rough earth profile that is fairly rich. I am also getting mineral notes with that though. There are espresso beans present, and I am getting a finish of leather, dark cocoa, black pepper and tobacco. Medium-full in strength and body.
John: Sweet earth to start as lingering earth and medium strength baking spices carry through the post draw. A light strength cocoa tries to push through on the post draw after a few puffs. As the second third settles, earth is driving the profile.
Jiunn: The second third drastically improves from the first third. The profile is now doing a good job of cutting away from the overtly milky nature. There’s now cedar and more baking spices involved. This makes it taste like a more cohesive profile. Strength and body is still medium and medium plus, respectively. 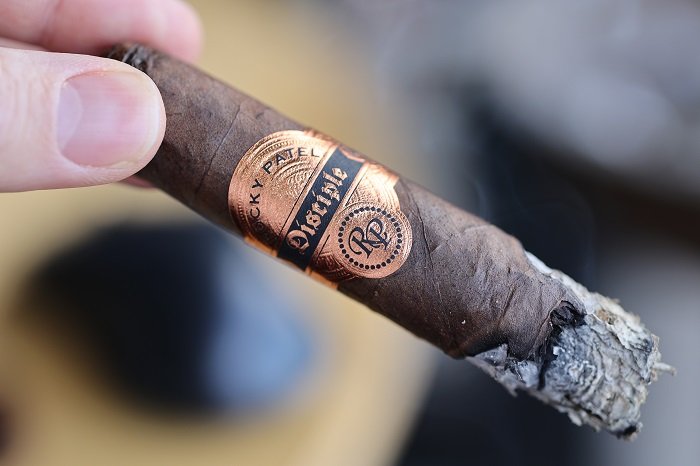 Aaron: As the final third begins, the toasted cedar has a slight lead over the musty oak and dry earth. The retrohale is now just musty oak, toasted cedar and dry earth. At an inch in, the dry earth takes the lead with the musty oak and toasted cedar right behind and mild, dull black pepper in the background. As the cigar wraps up, all of the components were even aside from the dull black pepper being light in the background. The strength remained at medium.
Seth: The final third delivers that rough earth, dark cocoa, mineral, pepper and sweet spice quality. It is in line with the first and second thirds without that lemon quality. Chewy, earthy, long finish. Medium-full in strength and body.
John: The last third hits my taste buds with cocoa and earth in equal measure. Some wood comes through the profile as it begins to settle. As it progresses, a heavy loamy earth sits on the post draw at medium-full strength. I find the post draw flavors overwhelmed my palate through the last third.
Jiunn: The final third yet again transitions. I now get bitterness off the cedar wood as well as shiny metallic minerals. These two notes mixed with the existing milk reverts back to an unpleasant profile. Strength and body is unchanged at medium and medium plus. 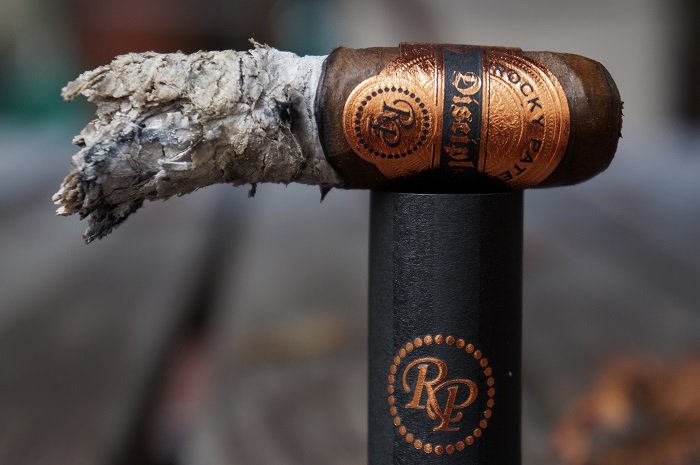 Aaron: The burn was straight most of the way but saw half of the wrapper not want to burn in the second third. I let it ride and the burn corrected itself and was straight the rest of the way. The ash held on in inch and a half increments.
Seth: Nice burn throughout. Weird light up.
John: As is typically my experience with Rocky Patel cigars, the burn was fairly flawless. At times there were some small sections of wrapper not burning, but they always self corrected. Ash held on in 3/4 inch increments before I knocked it off to avoid wearing it.
Jiunn: Burn performance was nearly perfect. The only downside was a couple quick touch-ups within the first third and flowery ashes. 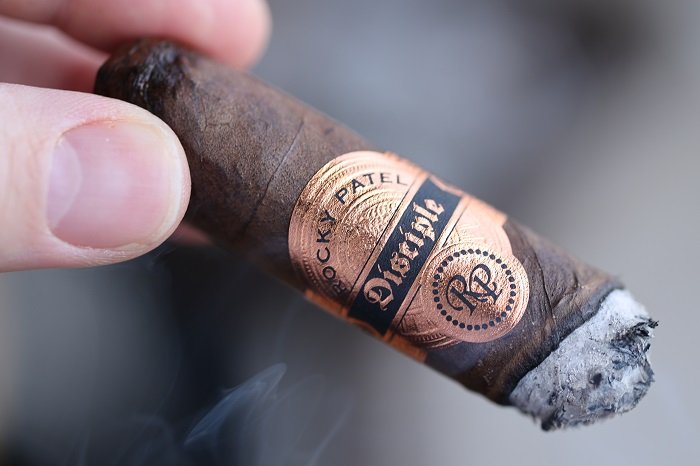 Aaron: The cigar started with musty oak, earth and baking spice which later morphed into black pepper. Some toasted cedar joined in not long after. The profile maintained these components but became a bit muddled in the second third and carried that along the rest of the way. The Rocky Patel Disciple Bala started well as the flavors were precise and defined, but the profile fell down a bit from the second third on as they lost some of that definition. This was a fun size to smoke. The price point is about on par with the experience, but I’m not sure I’d come back to it all that often as I’d like to see the profile from the first third last longer.
Seth: If you are looking for an average Mexican San Andres offering by Rocky Patel that is overpriced, this Rocky Patel Disciple Bala is for you. It’s not just right for you, it’s perfect. Maybe we’re paying more for the unique vitola and packaging? Maybe we’re paying for them to punch the foot of the cigar for us? I don’t know. You probably shouldn’t ask me. A basic Nicaraguan blend that is covered in a lacking Mexican San Andres wrapper, designed to capture mediocrity. Unlike the 12 Disciples/Apostles, this Disciple will not face a painful death but will linger in cigar shops for many years to come and have me wondering why it is still in production in the year 2031.
John: The Rocky Patel Disciple Bala delivers quite the visual spectacle for the pre-light, and there is a time through the first third where the cigar shows promise, unfortunately the dark and earthy nature of the profile just becomes palate fatiguing for the remainder of the review. No surprise with a Rocky Patel cigar that the draw and burn were flawless. The Disciple comes in a few different sizes, I would be curious how the other vitolas hold up, specifically the Robusto. Although I do really enjoy full bodied cigars, the Bala seemed to provide strength at the expense of flavor complexity. Total smoking time was 1 hour and 50 minutes.
Jiunn: The Rocky Patel Disciple Bala took me on a journey with many twists and turns. But it’s a not a journey I’m interested in taking again. The cigar started off with an unpleasant milk and baking spices, then it surprisingly shifted to a well melded profile, and then it went off the cliff. Engaging to smoke through, but not a pleasant overall profile.