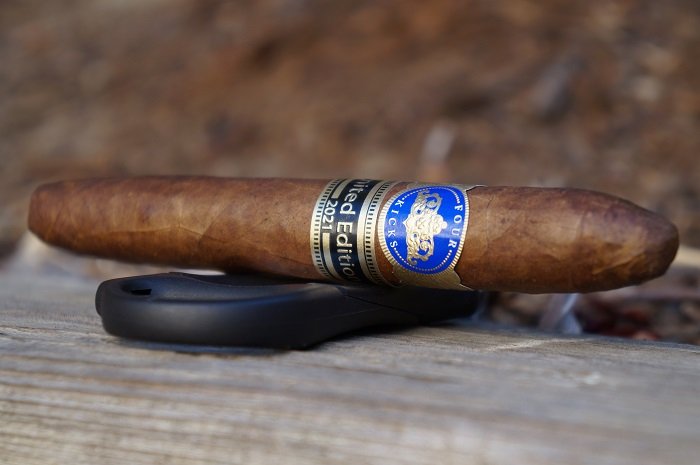 Aaron: The wrapper on the Crowned Heads Four Kicks Capa Especial Águilas LE 2021 is a marbled medium brown and has a network of small, lightly raised veins present. The seams are smooth and the tapered head is well finished. There are two bands, with the primary carrying the traditional design for the line but with a blue and gold color combination. The secondary band is the Limited Edition style they use on multiple lines. The aroma from the wrapper and foot is a mix of lightly sweet wood and some light earthiness. The pre-light draw is a mix of black tea and cedar.
Seth: Very cool vitola. I love it. But, if you are going to release a vitola of this nature it must be in better condition. The Crowned Heads Four Kicks Capa Especial Águilas LE 2021 wasn’t rolled well and the wrapper was cracked at the foot. Massive vein around the 109 style cap. Colorado in coloring. Marbled brown with some tooth. Silky in texture with aromas of spices, tobacco, leather and wood.
John: The Crowned Heads Four Kicks Capa Especial Águilas LE 2021 is cellophaned, and has a UPC sticker that tears in half when the cellophane is opened. The cigar is a Perfecto vitola, and is double banded with the secondary band reading ‘Limited Edition 2021’. Nosing the wrapper, I picked up on light, fresh cut wood and cereal. From the slightly open foot, I picked up on hay, dry wood and light tobacco.
Jiunn: The Crowned Heads Four Kicks Capa Especial Águilas LE 2021 has a Colorado claro wrapper shade. Veins are well pressed, seams tight, bunch and roll even and head well wrapped. Aromas from the wrapper gives pungent stinky barnyard and cedar. Aromas from the foot give rich red pepper spice and nuts. Cold draw gives nuts, sweet bread and hay. 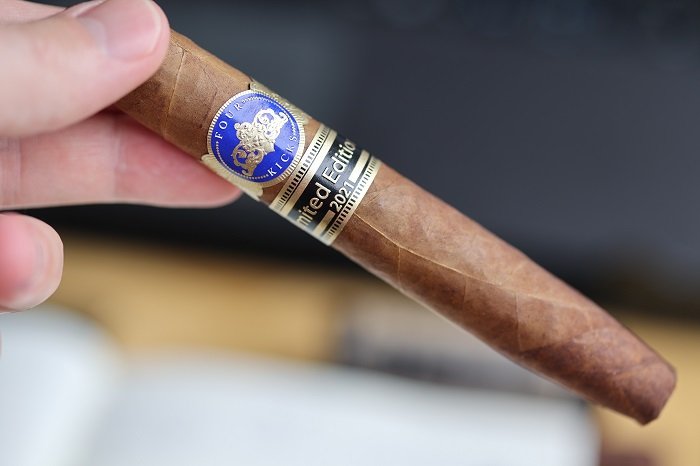 Aaron: The cigar begins with toasted cedar and light mustiness. At a quarter inch in, some black pepper joins the profile. At a half inch in, the toasted cedar, mustiness and black pepper are all even. The retrohale is toasted cedar and mild black pepper. As the third comes to a close, the musty, toasted cedar is up front and very detailed while the black pepper is now a bit further behind. The strength in this third was right at medium.
Seth: The first third opens with spice notes, and I am picking up cinnamon, nutmeg and white pepper. There are some meat, herbal and leather qualities as well, and the finish is that of earth. In terms of strength and body, I would classify the cigar as a solid medium.
John: The first third opens with creamy baking spices and wood, with all those notes at medium-plus strength through the retrohale. Additional notes on the retrohale include bread and a graham cracker sweetness. There’s a pleasant chocolate undercurrent to the entire profile. As the cigar progressed, mild hay moves into the center of the draw.
Jiunn: The first third is full flavored with a great combination of sweetened buttery bread, roasted nuts and a citrus twang. Retrohaling highlights a good amount of red pepper spice, but it doesn’t take away from the sweetness of bread and roasted nuts. The finish is on the shorter end with lingering red pepper on the back palate. Strength is medium-full, body is medium. 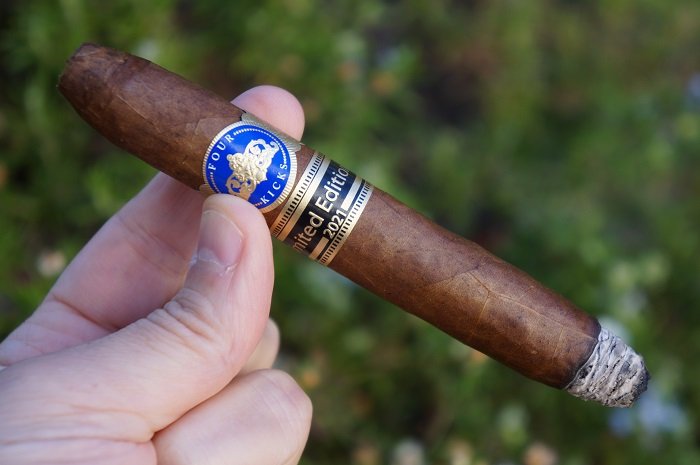 Aaron: As the second third begins, a light bitterness joins the profile. At a half inch in, the toast level has increased. The retrohale is toasted cedar with light mustiness and black pepper. At an inch in, some dry earth joins the profile and the overall profile has become a bit dry. As the third comes to a close, the profile is toasted cedar with dry earth in the middle along with mustiness and black pepper in the background. The strength in this third remained at medium.
Seth: The second third delivers a dry earth profile that is paired with some wood and faint spice and mineral notes. Not wowing, quite basic, but not bad. In terms of strength and body, solid medium.
John: The second third keeps me interested with lingering graham cracker and wood. It settles back into a milder version of the first third with sweet bread, baking spices and graham cracker. In the bottom half of the cigar, there’s an interesting citrus finish. As the bottom half progresses, some dry cedar leads into the post draw.
Jiunn: The second third continues to be full flavored. It’s every bit sweet and nutty as well as spicy, which is a change from the second third where the spice wasn’t there as much. Further, the citrus note is now more of a stone fruit note of tart plums. Strength and body is still medium-full and medium. 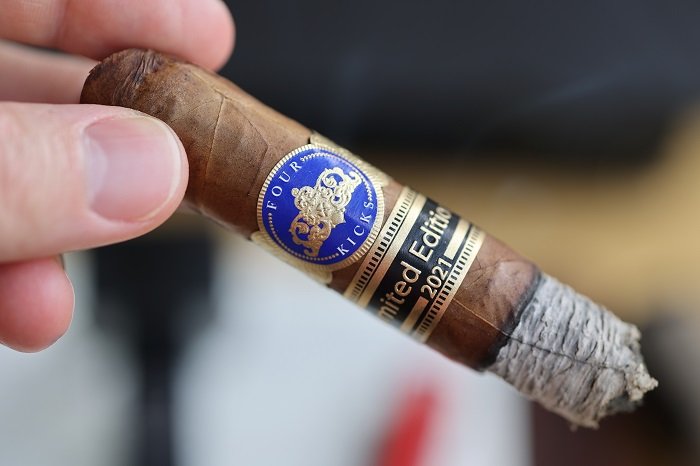 Aaron: As the final third begins, the toast increases to become fairly heavy. The retrohale is now just toasted cedar and dry earth. At three quarters of an inch in, the profile is heavily toasted cedar and dry earth up front with light mustiness and black pepper in the background. The cigar maintains this profile through to the end. The strength remained at medium.
Seth: The final third was right in line with the second. I am picking up dry earth and wood notes with some subtle cinnamon, cocoa and white pepper. Again, it is a lacking third. Medium in strength and body.
John: Dry cedar and hay mix with bread to lead into the last third. Some light-plus strength earthiness moves into the center of the profile as it progresses. I was still picking up some dry cedar on the post draw, but it was quite mild.
Jiunn: No changes to the final third. Still a mouthful of deep flavors centered around sweet buttered bread, roasted nuts and tart plums. Strength and body finishes the same medium-full and medium, respectively. 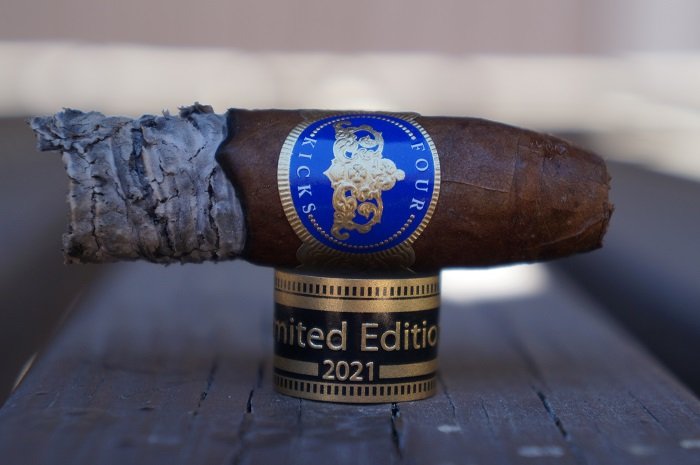 Aaron: The burn line was slightly wavy at times, but never required any attention. The ash held on in inch and a quarter increments.
Seth: Good burn throughout.
John: The burn was quite straight for the review, with a slightly gray ash. The ash held on up to two inches before I tapped it off, for lap safety.
Jiunn: Flawless burn. Even burn, tight ashes, ample smoke production and cool burning temperature. 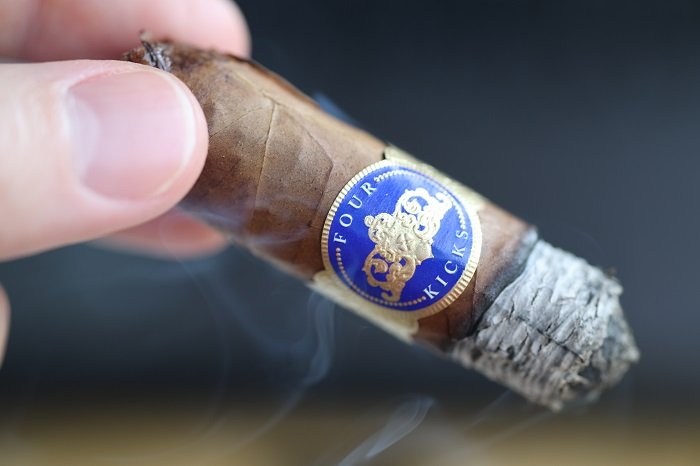 Aaron: The draw was slightly tighter than I prefer, but didn’t cause any issues with the smoking experience.
Seth: Nice draw.
John: The draw had some minor resistance to it, roughly 1-1/2 notches into the resistant spectrum, but each draw produced substantial amounts of smoke.
Jiunn: The draw was also perfect, giving the ideal air flow.

Aaron: The cigar started with a nice profile of toasted cedar, mustiness and black pepper. The second third gained some dry earth which caused the overall profile to become a bit dry and knocked the enjoyment level down a bit and maintained that level through to the end. The Crowned Heads Four Kicks Capa Especial Águilas LE 2021 was fairly average overall, and with it being a limited edition, didn’t really deliver on what I envision one to be. I’d be more inclined to go back to a standard Four Kicks and don’t really see myself coming back to this cigar.
Seth: This Crowned Heads Four Kicks Capa Especial Águilas LE 2021 was what I expected and disappointing at the same time. I am a big fan of Ecuadorian Sumatra offerings, and I believe Huber and EPC have had some tremendous Ecuadorian Sumatra offerings in the past, but this cigar was not one of them. The cigar was lacking from beginning to end. The wrapper seemed weak, lacking those high-quality Ecuadorian Sumatra flavors, and the cigar never took off. Medium in strength and body. Borderline average cigar.
John: I thoroughly enjoyed reviewing the Crowned Heads Four Kicks Capa Especial Águilas LE 2021. Outside of the extremely long name, the only downside was a slightly underperforming last third. The burn was perfect, and the draw had a mild amount of resistance to it. I would happily smoke another Four Kicks LE 2021 if I had the opportunity. Total smoking time was 1 hour and 22 minutes.
Jiunn: It’s about time I had a legit, tasty review cigar. It’s been months! I’d like to take this opportunity to thank Jon Huber and God. The Crowned Heads Four Kicks Capa Especial Águilas LE 2021 is how a cigar should taste. Full in flavors and engaging from initial light to nub. Will this trend continue? Probably not.