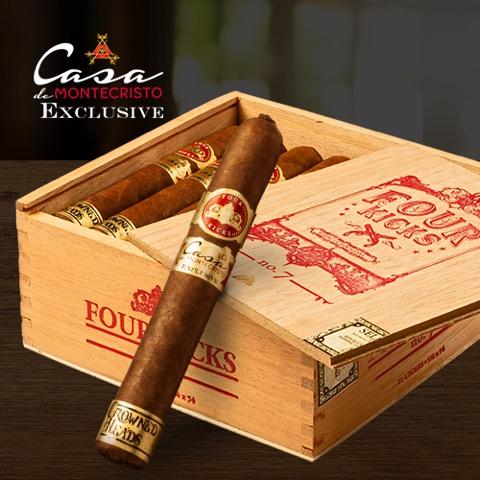 The Four Kicks – No. 7 -Casa de Montecristo Exclusive, uses the original Four Kicks blend which has earned 90+ ratings. Crafted in Ernesto Perez-Carrillo’s Dominican factory, the cigar is comprised of Nicaraguan long-fillers and a silky-smooth Ecuadorian Habano wrapper. It is a premium, medium-bodied smoke whose full-flavored profile opens-up big and bold, and then follows with complexity and richness, including flavors of toffee, cedar, and black pepper finish.

The Four Kicks brand was originally influenced by lyrics from the band, Sons of Leon, and is about sticking to your guns, and remaining loyal to those whom you love, and where you came from.

“I am excited to partner with both Jon and Mike on Four Kicks No.7. The cigar has the flavor profile of the original Four Kicks, but we were able to add a different look and feel to the cigar. Anytime you can team-up with great people and the outcome is an exclusive offering into your store, it’s a win!, says Casa de Montecristo CEO, Brad Winstead.

The Crowned Heads Cigars Four Kicks – No. 7 Casa de Montecristo Exclusive will come in one size 5.25 x 54. The cigars will be offered in 21-count boxes and are priced at an MSRP of $9.50 per cigar. Limited quantities will be available for purchase starting June 24,2020, exclusively at Casa de Montecristo retail stores.