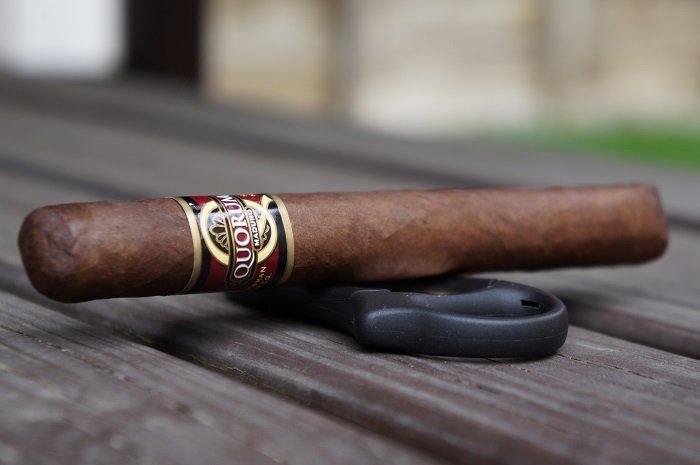 The wrapper on the Quorum Maduro Toro is medium brown, has a couple of raised veins present as well as some general lumpiness to the roll. The seams are easily visible as they are slightly raised and the head is finished off with a decently applied double cap. The cigar length actually measure out to 6.25 inches rather than the advertised 6 inches. The band is burgundy, black and gold with a large Q and then the brand name as well as the Maduro designation. The aroma from the wrapper is a mix of slightly damp wood and dry earth while the foot brings wood, tobacco sweetness and light ammonia. The pre-light draw shows that the head is a bit spongy, but brings a mix of cedar and graham cracker along with a decent level of spiciness on my lips that lasts for quite a while. 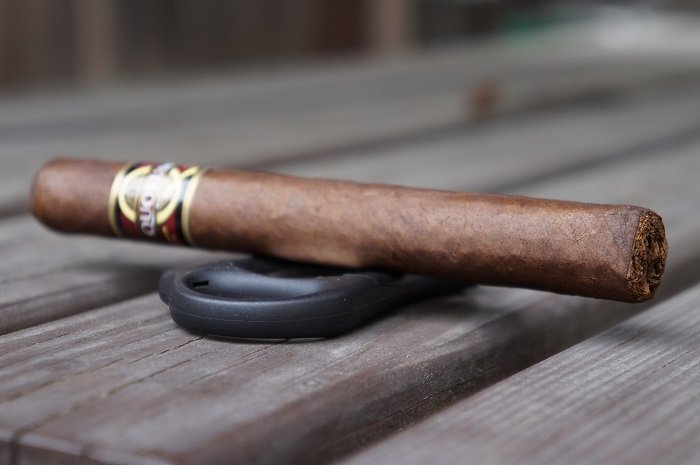 The Quorum Maduro Toro has a UPC design that leaves it intact when the cellophane is opened. The cigar itself has a rustic, lumpy appearance, with a dark colored wrapper. Nosing the cigar, I was able to pick up aromas of sweetness, spices and fresh cedar. From the foot, there was sweet plum. 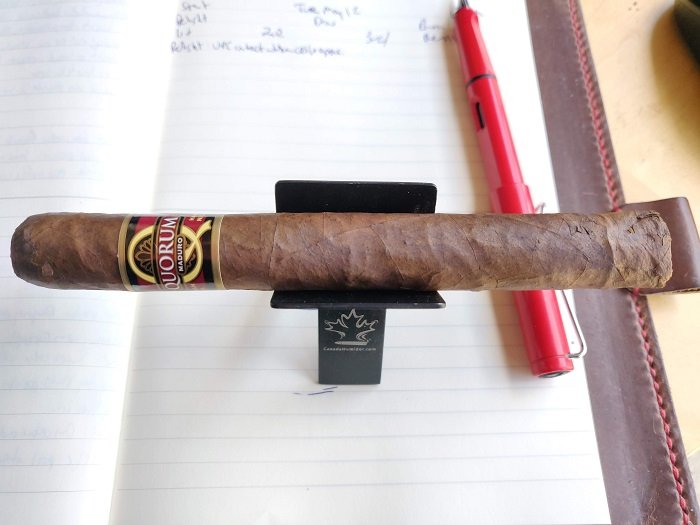 The Quorum Maduro Toro has a Colorado Maduro wrapper shade showing a nice oily texture. Veins are well pressed, seams tight, bunch and roll even but slightly lumpy and head with a deep wrapped cap. Nosing the wrapper gives generic dry wood and roasted nuts. Aromas from the foot give similar but with a baking spice showing. Cold draw tells airy cedar, hay and slight tingly black pepper on the lips. 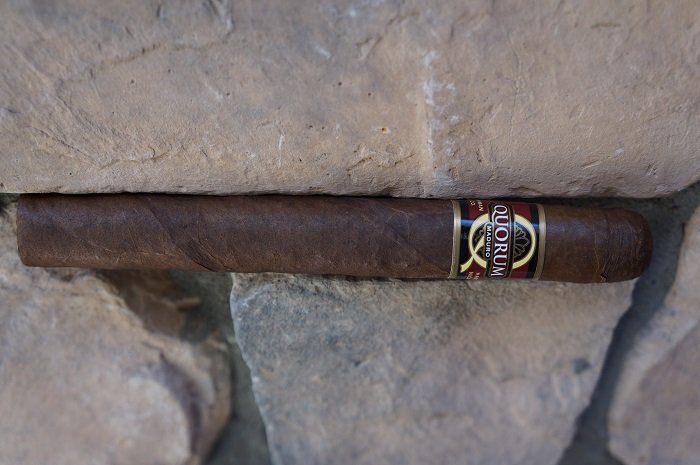 The cigar begins with spicy cedar and a light cocoa powder. At a half inch in, the spicy cedar is up front as some dry earth has joined and is even with the light cocoa powder in the background. At three quarters of an inch in, the dry earth has increased and is in between the cedar and cocoa powder. The retrohale is just a general wood note and dry earth. At an inch and a quarter, some mustiness joins the profile as the cocoa powder has departed. At an inch and a half, the dry earth and mustiness are even, right behind the cedar. The profile becomes a bit drying as it reached the end of the third. The strength was right at medium. 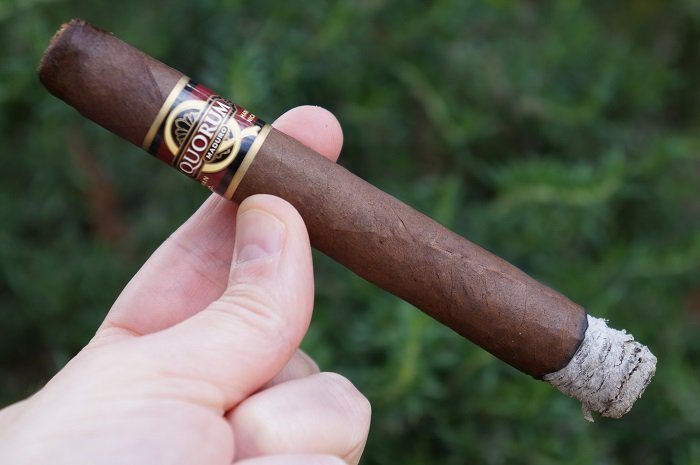 The first third opens with flavors of spicy cedar, finishing with that cedar and some leather. Creaminess takes up the retrohale. As the cigar progresses, slightly dry cedar moves into the middle of the profile. Baking spices start to linger with the leather on the post draw. Some mid profile earth comes through once the first third is established. Some time later, the spices fall off, leaving only the leather on the post draw. Nearing the end of the first third, mild chocolate starts to come through at the end of each draw. 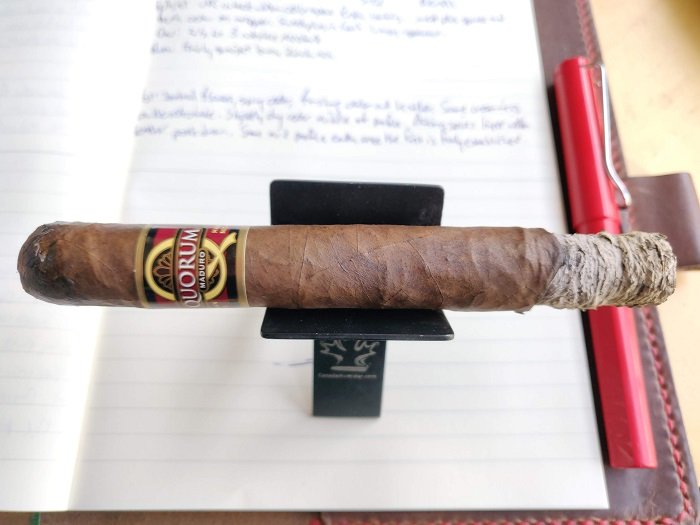 The first third shows milk chocolate, dried nuts and light cedar. There’s no trace of spice until I retrohale, in which there’s a spicier cedar that forms. The finish is incredibly short with maybe just a hint of cedar. Strength and body is medium. 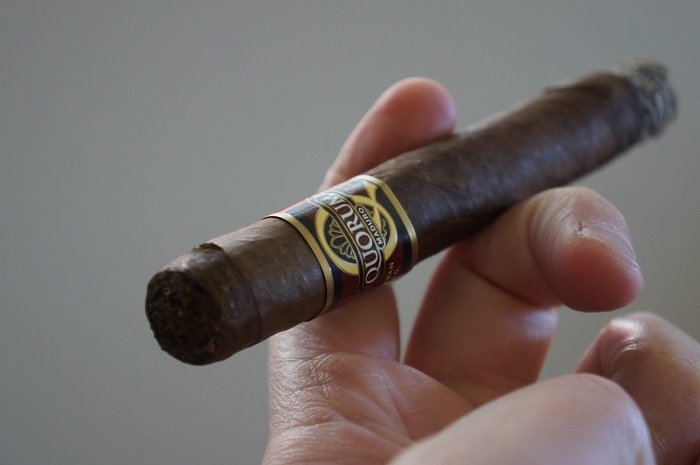 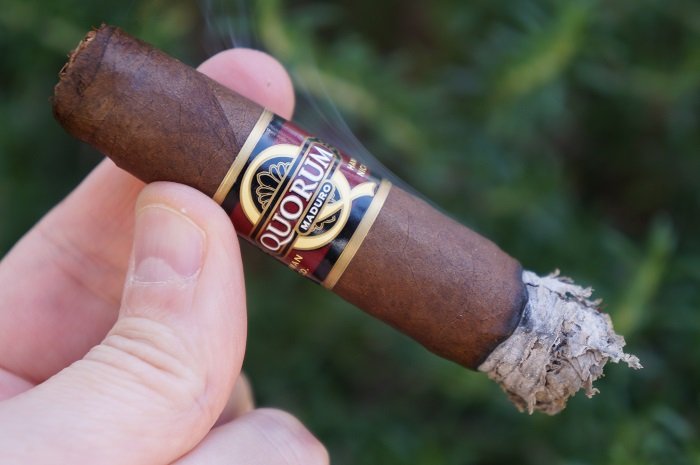 Sweet cedar takes up the retrohale, finishing with mild cocoa and cedar. Mild pepper starts to come through at the end of each draw as it settles in. There’s a general sweetness on the profile as the cigar progresses. By the halfway point, cedar is the primary flavor driver. Some dry tannins join the cedar by the bottom half. Some time later, mild charred earth takes up the post draw. 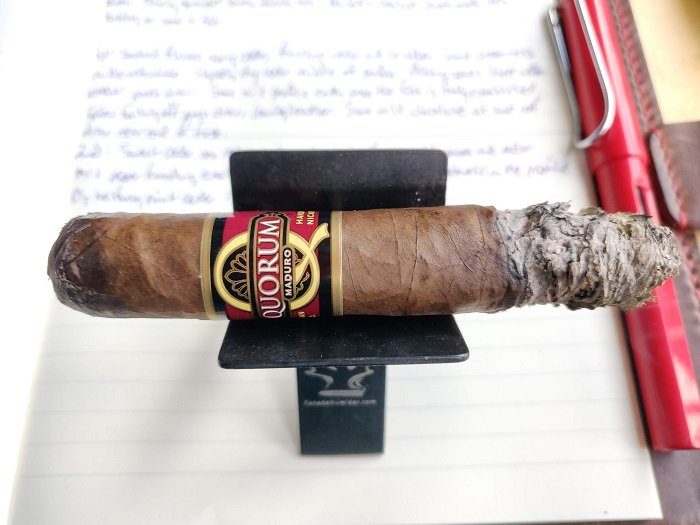 The second third becomes slightly dry on the palate. Aside from that, the flavor feels more linear, mainly highlighting a milk and soft chocolate combination. Strength and body is still medium. 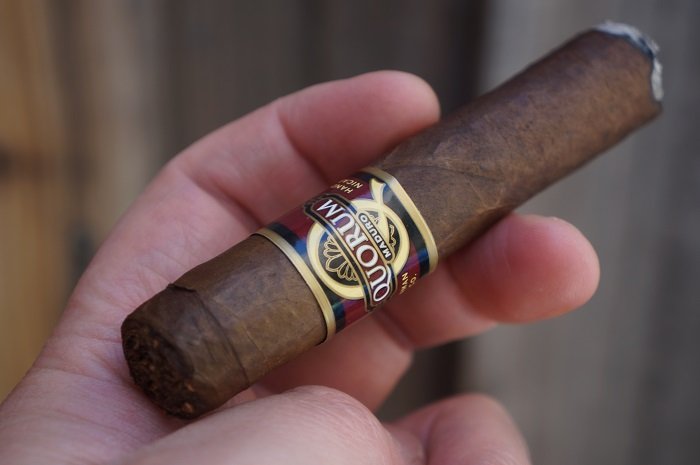 The final third continues on with the slightly charred cedar, mustiness and dry earth all even. The profile remains fairly dry. At a half inch in, the cedar takes on a bit of a young note. At three quarters of an inch in, the char picks up a fair amount. The retrohale remains musty cedar and dry earth. At an inch and a half, the profile is slightly charred young cedar, mustiness and dry earth. The profile maintains itself through the end of the cigar. The strength in this third remained at medium. 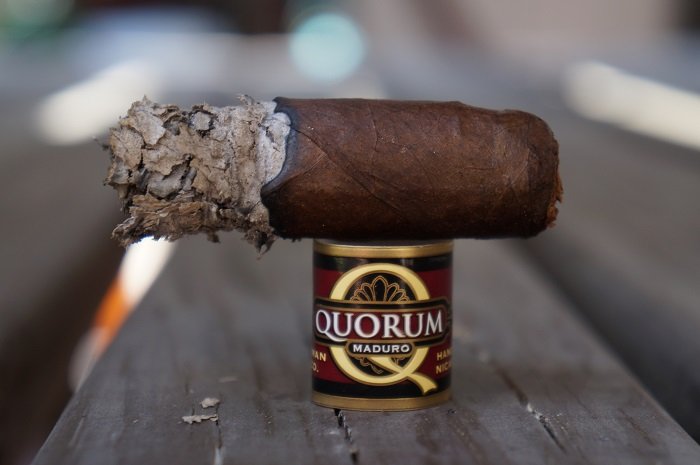 Earth and dry cedar combine going into the last third. Mild sweetness takes up the middle of the profile. Tannins join the cedar as the cigar settles in. Mild char and earth take up the post draw and build in intensity as the cigar progresses. 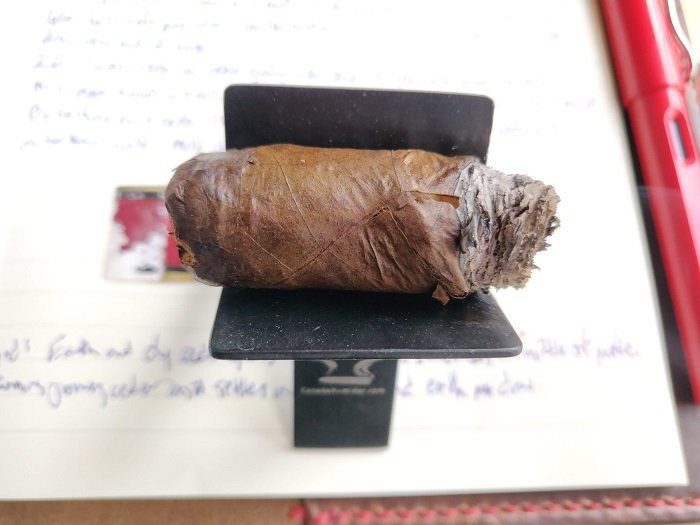 The final third brings a very similar profile as the second third. Slightly drying on the palate with milk, soft chocolate and now a subtle baking spice. Strength and body finishes medium. 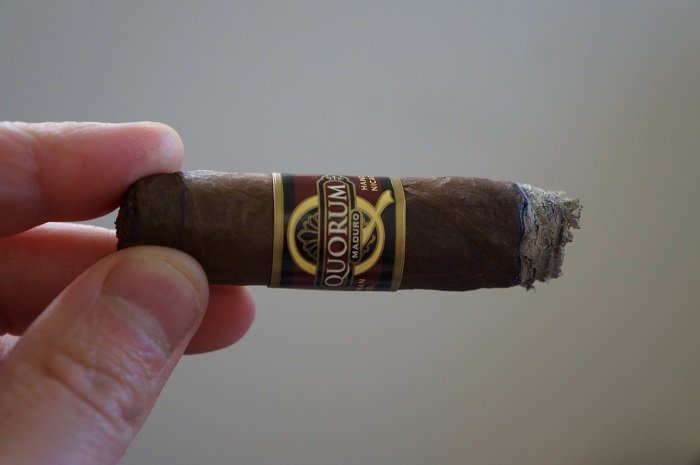 The burn line was slightly wavy throughout, but never needed any attention. The ash held on in inch and a quarter increments but was a bit flaky. 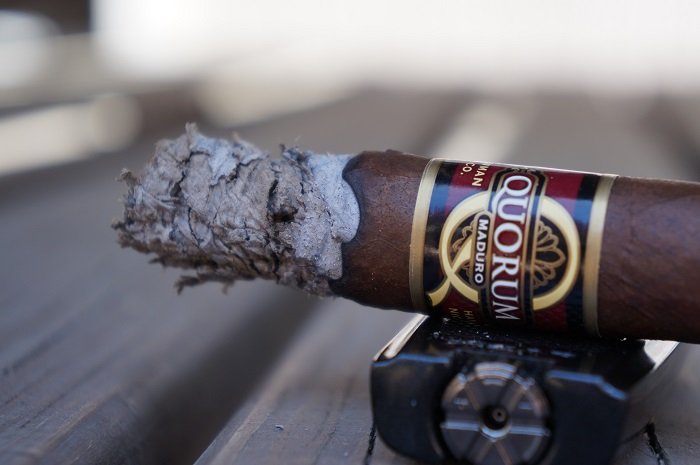 The burn outperformed cigars many times more expensive. Ash held on well, at times up to 2 inches, falling off cleanly each time. There was some mild wrapper damage as I took off the band, it appeared to be from too much glue. 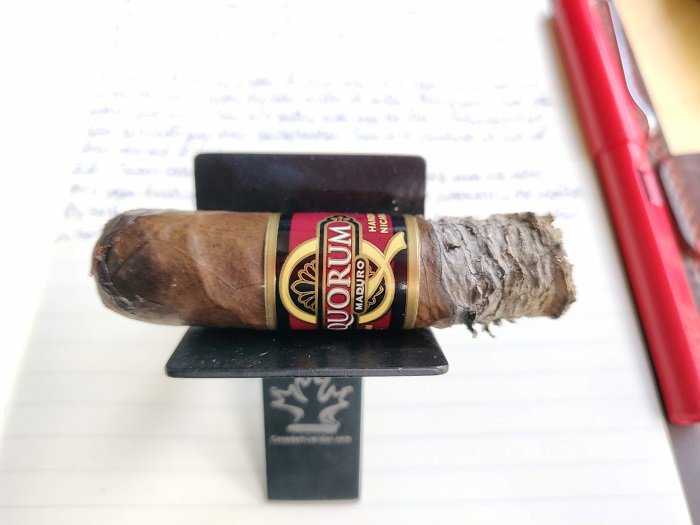 Aside from a couple quick touch-ups to get the burn line in order, there were no issues. Cool burning temperature and fairly solid ashes. 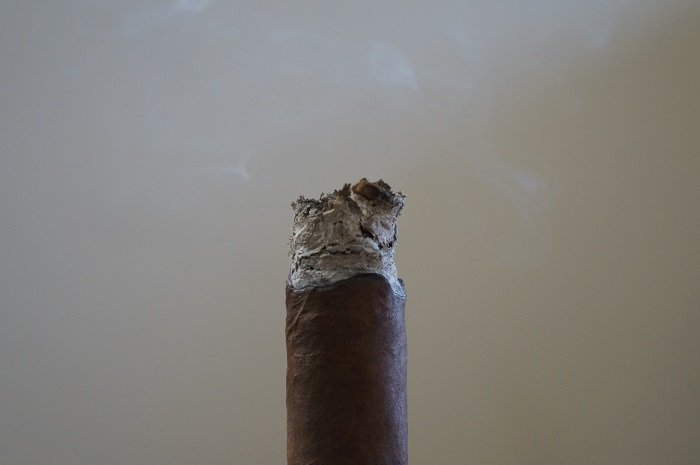 The cigar began with spicy cedar and a light cocoa powder. Some mustiness and dry earth joined as the cocoa powder dropped out. The second third saw some char join in. In the final third, the char increased for a time and the cedar took on a young note. Construction was very good and strength was medium the whole way. The Quorum Maduro Toro started with a fairly average flavor profile, but by the second third, when the char joined, the profile became subpar and maintained that level the rest of the way. This is about what you can expect from a sub $3 cigar most times. A subpar flavor profile, but the great construction helps out a bit. The very definition of a yard gar that you can smoke while doing other things and not worry about it. Be aware of the flaky ash, as it will get all over. Not the type of cigar that I gravitate towards, but there’s a time and place for it.

The Quorum Maduro Toro had some good flavors in the first third, was fairly average in the second third and the char and earth in the last third let to a subpar experience. Overall, an average experience which quite frankly at this price point I consider to be a significant win. I have a fair amount of experience with the brand as they sell quite well up in Canada. If you’re looking for a budget cigar, or you’re a new smoker, you’d be hard pressed to find a better performing cigar in the sub $4 category.

The draw was perfect, giving the right resistance and pull.

When I see a near $3 mixed short filler cigar, my main question is if it’s worth the money based on taste and technical performance. The answer is a resounding yes. The Quorum Maduro Toro is one of the better cheap cigars I’ve had. Price aside, if I now ask whether the cigar was an overall good cigar, the answer is not quite. The cigar lacks density and complexity of flavors. It needed to break away from the primary milk and soft chocolate notes. More spice, earth, something to further open up the profile. But given the performance based on price, for sure a recommend.