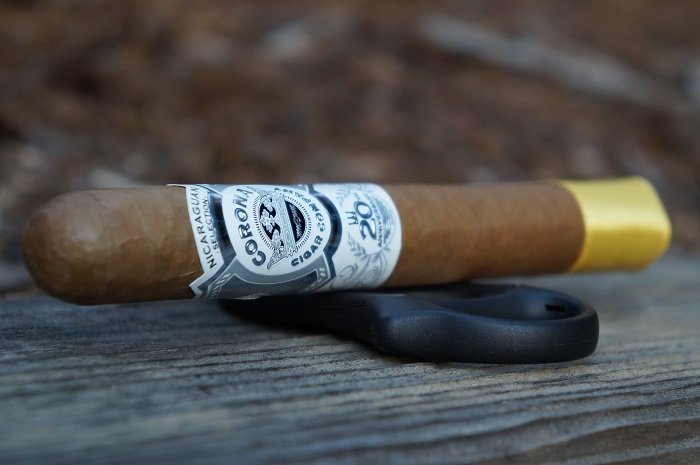 The wrapper color is a light, dull looking tan with a couple of slightly raised veins running the length of the back of the cigar. The seams are smooth and slightly visible while the head is finished off with a well applied triple cap. The cigar has two bands with the primary being white, silver and black with the shops logo and line name. The foot band is a yellow ribbon. The aroma from the wrapper is a light barnyard that is hay forward while the foot brings a mix of wood, tobacco sweetness and light white pepper. The pre-light draw is a mix of hay and leather with a medium level spiciness on my lips. 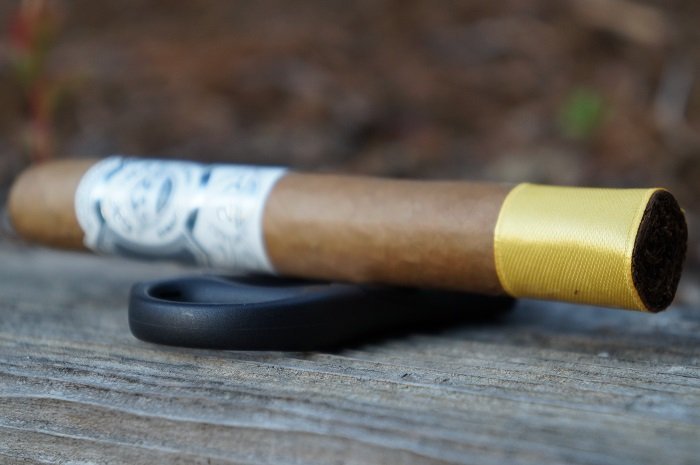 The Corona Cigar Nicaraguan 20th Anniversary FSG Corona Gordo has a large primary band and a yellow foot band of ribbon. The primary band has silver letters and silver accents, on a white background. The wrapper is a tan brown color and has aromas of barnyard, cedar and a deep sweetness. In the foot, I was able to pick up very sweet raisin and tobacco. 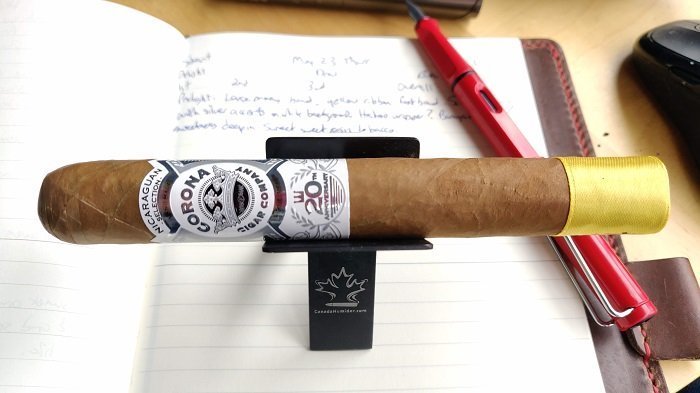 The Corona Cigar Nicaraguan 20th Anniversary FSG Corona Gordo has an unattractive claro wrapper with traces of pale green. The feel of the wrapper however is nice with a semi-slick oiliness. Bunch and roll is firm, veins well pressed, seams tight and head finished off with a well adhered multi-wrapped cap. Aromas from the wrapper give pungent barnyard and cedar. Aromas from the foot tell a mix of spicy cedar and rich nuttiness. Cold draw tells hay and shaved wood pieces. 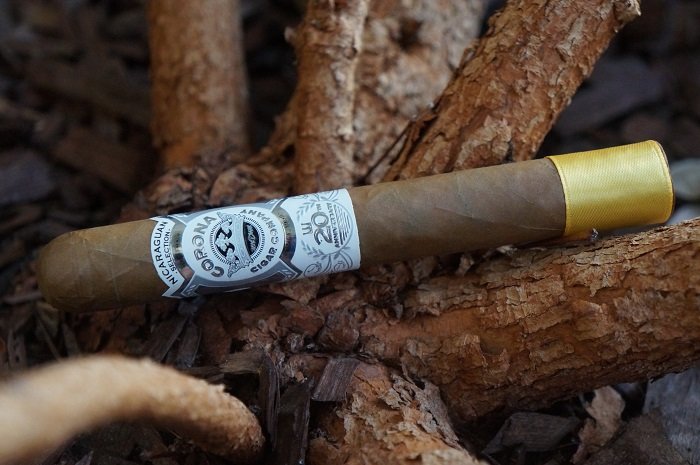 The cigar begins with a creamy and spicy cinnamon. At a quarter inch in, a general wood note joins the profile. At three quarters of an inch in, the wood and creaminess are up front while the cinnamon is now mellow in the background. The retrohale shows a bit more cinnamon but does have the creamy wood up front. At an inch and a quarter, the wood gains a toasted note. As the third comes to a close, the cinnamon is quite faint. The strength in this third was mild-medium. 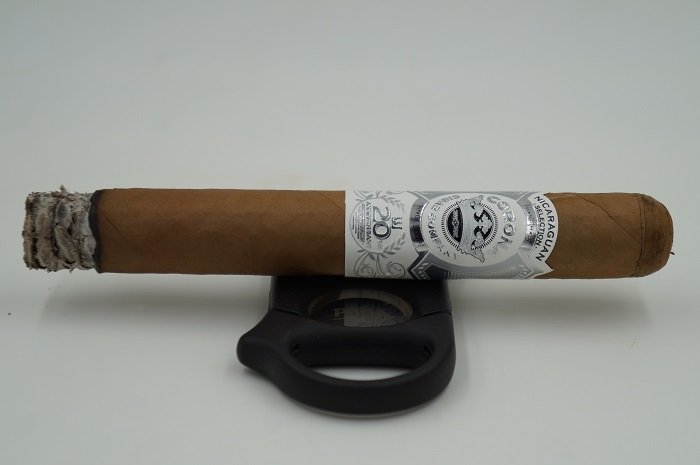 My first few puffs begin with powerful notes of spices, sweetness and cedar. That spice quickly evolves to chili pepper on the lips and at the center of my tongue on the post draw. As the cigar begins to settle in, graham cracker joins the retrohale, with subdued chili pepper to finish. Minutes later, some Connecticut Shade like bitter hay rounds out the profile. Medium plus spice and pepper through the retrohale, as the chili pepper backs off, replaced with some creaminess. Bitterness comes through at the end of the draw and carries into the retrohale. At the halfway point, the creaminess begins to linger into the post draw, as the graham cracker becomes richer and more intense. A dry mouthfeel starts at the bottom half of the third, as cocoa works into the profile. Almond paste is detectable at the 33 minute mark, as the chili and pepper intensity has continued to fall to just over light plus. 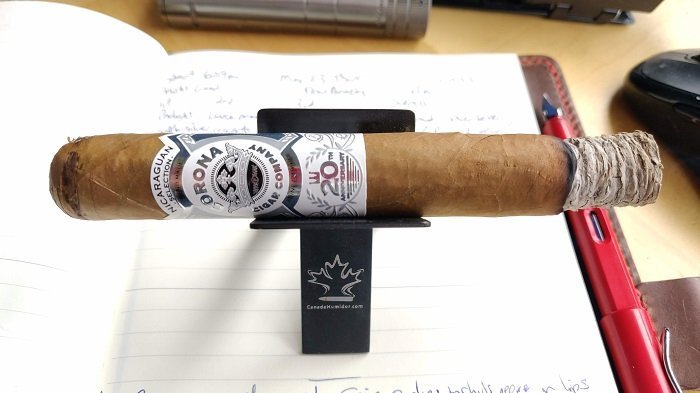 The first third has toasted bread and roasted nuts core flavor profile also with cedar and minerals. The retrohale brings out a pretty heavy dose of spicy cedar and roasted nuts. The finish is namely cedar driven and is very long and lingering. Strength takes no time to reach near medium-full while body is medium. 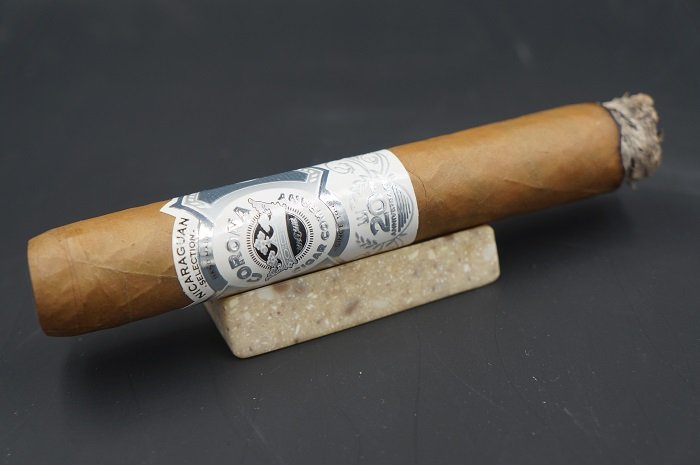 As the second third begins, the cinnamon has completely left and the cream has transitioned to a mustiness. The retrohale is toasted wood with a slight mustiness. As the third comes to a close, the profile is maintaining the toasted and musty wood. The strength in this third remained at mild-medium. 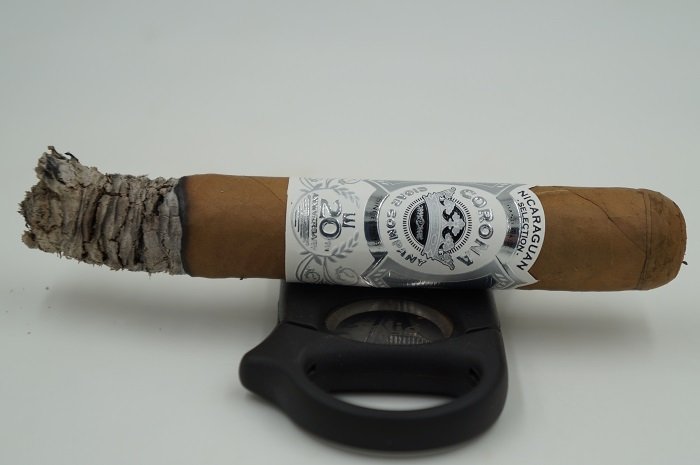 The drying mouthfeel steps up during the transition into the middle third, mixing in with cedar. There is some mild cocoa on the mid palate and I would describe the profile initially as a Connecticut Shade toasted hybrid. The graham cracker from the first third returns at light plus on the retrohale. At the halfway point, bright green cedar hits at the end of the draw at medium minus, with mild bitterness on the tip of my tongue. 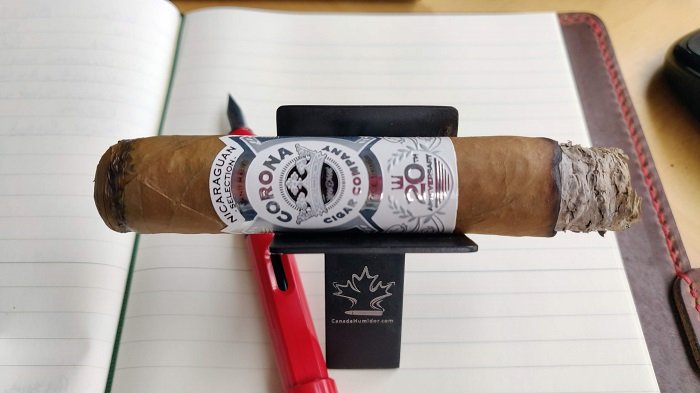 The second third has a couple key transitions. For one, a noticeable dryness forms on especially the tongue. Second, there is a greater presence of spicy/raw cut cedar which slightly overshadows the toasted bread and roasted nuttiness. Strength ramps to medium-full and body remains medium. 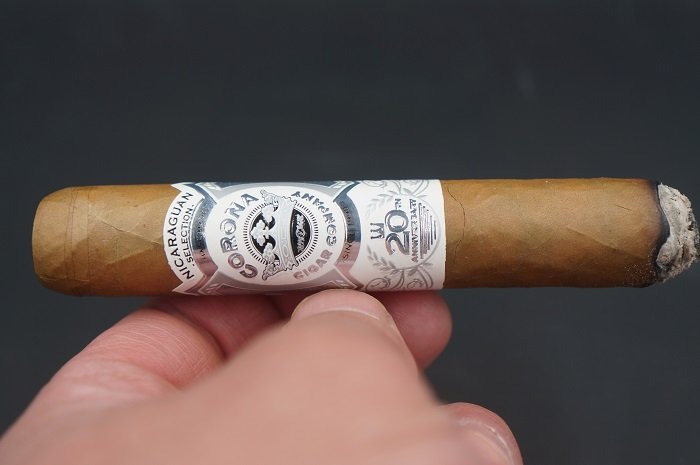 The final third is a continuation of the toasted and musty wood. At a quarter inch in, a faint char joins the profile. At an inch in, the char has built up a bit more. The retrohale is now just musty wood. As the cigar comes to a close, it begins to heat up which brings a vegetal note to the profile. The strength in this third bumped up to slightly below medium. 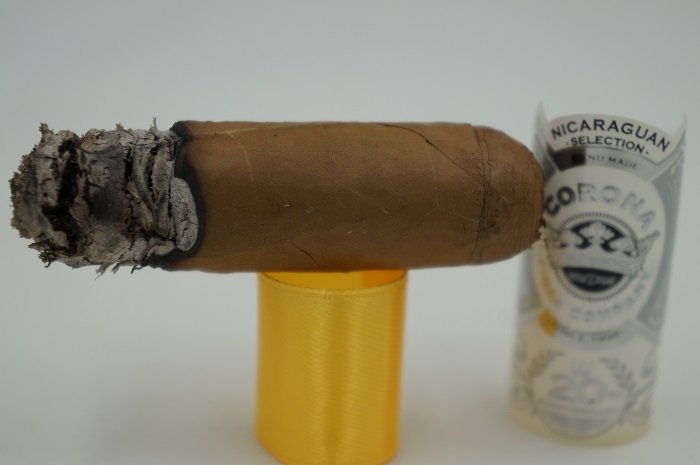 Hay and cedar carries into the last third. Mild graham cracker still maintains in the retrohale, finishing with tannic cedar, and loamy earth post draw. Once the cigar settles in, green cedar returns at the end of the draw at light plus. 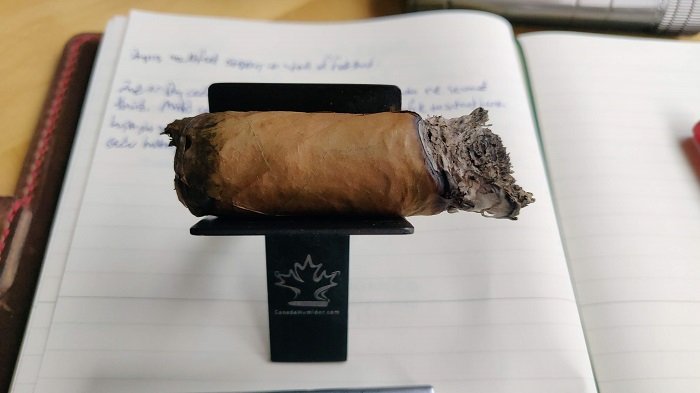 The last third continues to lose out on the softer notes of toasted bread and roasted nuts. The profile is dominantly medium-full strength, medium body with sharp cedar and minerals that is quite drying on the palate. 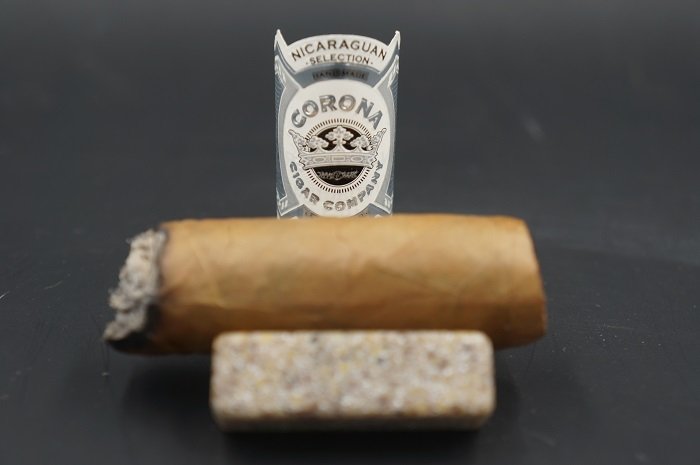 The burn was a bit wavy at times but never needed any attention. The ash held on in one inch increments. 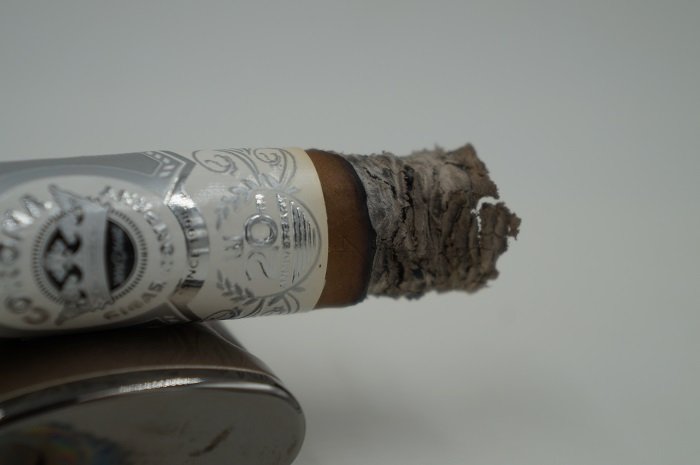 The burn is straight through the first third, slightly uneven in the middle, eventually requiring a touch-up. Burn is even through the final third. Ash held on well, up to 2 inch increments. 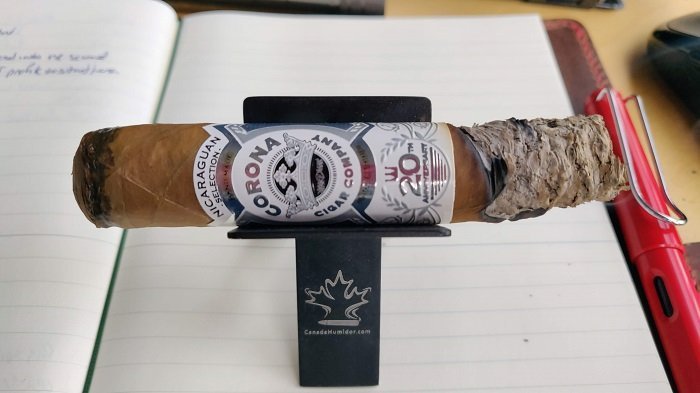 Aside from some flaky ashes, the burn was perfect. Straight burn, good ash retention and cool burning temperature. 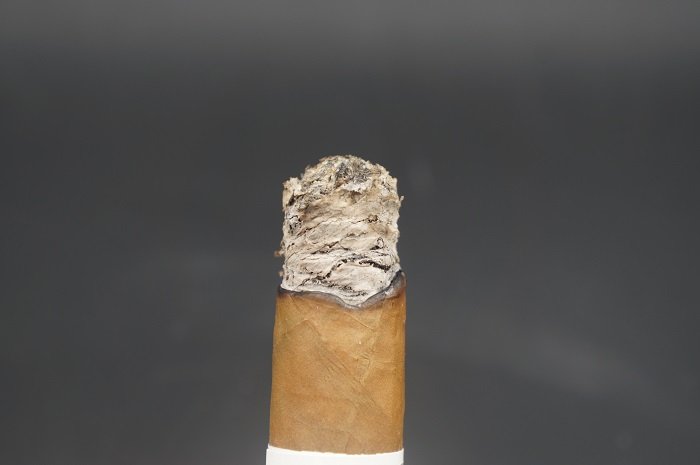 The flavor profile and complexity in the first third was pretty good. The profile from the second third on was pretty average though. This cigar provided a much mellower strength and body than the regular FSG line and I think will make the tobacco more appealing to a broader range of smokers. The price point is also very attractive as it’s sub $10 for a Toro which provides a lengthy smoking time. I’d have no problem smoking more of these and would be interested in trying it in a shorter vitola.

The draw is flawless, right in the ideal zone of resistance.

The Corona Cigar Nicaraguan 20th Anniversary FSG Corona Gordo has a rich medley of flavors ranging from spices, cedar, chili pepper, graham cracker, cocoa, bitter hay, creaminess, earth, almond paste and green cedar. At times I would describe the profile as an amp’d up Connecticut Shade, but throughout the experience was complex and enjoyable. There are elements of the ‘TABSA fingerprint’ I’ve come to recognize and appreciate. The cigar is medium-full and might be overwhelming to the palate of a mild cigar smoker. I would happily smoke more of the Corona Cigar Nicaraguan 20th Anniversary FSG Corona Gordo and I think it is a great example of a celebratory cigar release done well.

The draw was ideal giving the perfect resistance.

I overall enjoyed the Corona Cigar Nicaraguan 20th Anniversary FSG Corona Gordo. For me, it was more Aganorsa than FSG as the toasted bread, roasted nuttiness and drying palate (but at times too much of it) were some of the key identifiers. But honestly, it’s tough to tell without doing component tasting. The nuttiness and earthiness did remind me of smoking puros of FSG with Jeff Borysiewicz at IPCPR 2018, but again, difficult to really tell. Regardless, this was a profile led by a good set of soft notes (bread, nuts) and spicier notes (cedar, minerals). This wrapped up with amped up medium-full strength gave way to a cigar that was delicious. Just make sure you have a big cup of water nearby as the palate does get progressively drier, especially within the final third.