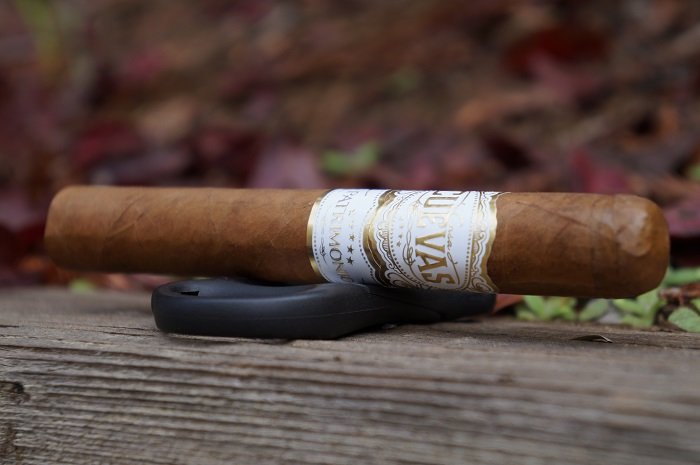 Aaron: The wrapper on the Casa Cuevas Patrimonio Toro is light brown and has a few decently raised veins along with a network of fine veins. The seams are smooth and the caps well applied. There are two bands, both carrying a white and gold color combination. The primary band has the traditional design for the brand while the secondary band denotes the line. The aroma from the wrapper is musty, young/green wood while the foot brings a combination of graham cracker and wood. The pre-light draw brings a mix of wood and apple sweetness along with a mild spiciness on my lips.
Seth: Firm in hand, the Casa Cuevas Patrimonio Toro sports a Natural wrapper that has a very light brown coloring. There are few veins present, and those are small throughout. The cigar is smooth, slightly silky in texture. Aromas of hay, cedar, honey and light tobacco.
John: The Casa Cuevas Patrimonio Toro comes in cellophane, and has a UPC sticker with an integrated tear point to leave the UPC sticker intact when the cellophane is opened. The cigar is double banded with the secondary band indicating “Hecho a mano Patrimonio”. Aromas from the wrapper included sweet cotton candy, bread and raisin. From the foot, I picked up on hay, bread and mild wood.
Jiunn: The Casa Cuevas Patrimonio Toro has a caramel Colorado Claro wrapper shade. Veins are well pressed, seams tight, bunch and roll even and head well wrapped. Aromas from the wrapper tell abundant cedar and a touch of white pepper. Aromas from the foot give intensified wrapper aromas. Cold draw gives subtle cedar and dehydrated stone fruits. 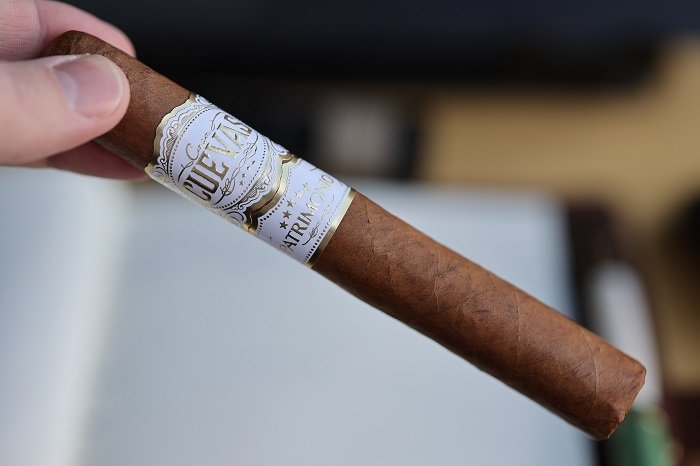 Aaron: The cigar begins with lightly toasted wood and mild baking spice. At a quarter inch in, a light mustiness joins the profile. At a half inch in, a light floral note joins in and the wood becomes more defined as cedar. The retrohale is toasted cedar with light amounts of mustiness and floral notes while a mid-level black pepper comes through on the backend. At an inch in, the mustiness is now up front with the toasted cedar. At an inch and a half in, the baking spice has transitioned to a dull black pepper that remains in the background but has a long finish. As the third wraps up, it is musty, toasted cedar up front with light floral notes and black pepper in the background. The strength in this third was right at medium.
Seth: The first third opens with sweet spices that are paired with cream, leather and hay. I am picking up earth and tobacco notes as well, and the cigar is balanced. There is this coffee, citrus, pepper finish as well. I would classify the cigar as medium in strength and body.
John: The first third opened with sweet hay, with a hay and wood combination to finish. Bread and baking spices quickly establish themselves in the center of the profile. Some mild, sweet wood joins the center as the first third settles in. Approaching the halfway point, baking spices begin to finish the draw. In the bottom half, the profile is driven largely by a baking spice and wood combination.
Jiunn: The first third has a good mix of sweet, toasty and woody. There’s two kinds of bread at play; one is a Hawaiian sweet bread (think King’s Hawaiian bread), and another is your typical burnt toast. With these notes is cedar wood. Retrohaling is where spice shows up in the form of black pepper. There’s also some tart plums. The finish shows a burnt toast and cedar combination. Strength and body is medium. 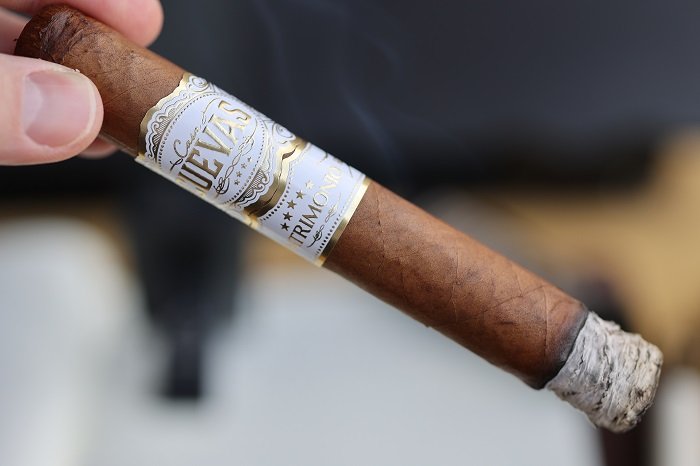 Aaron: As the second third begins, the toast level becomes a bit heavier. At a half inch in, a light chalkiness joins the profile. At three quarters of an inch in, the floral note increases a bit and the chalkiness is now very faint. The retrohale is musty, toasted cedar with light floral and black pepper. At an inch and a quarter, the black pepper is very faint. At an inch and a half in, the chalkiness picks back up a bit. The strength remained at medium.
Seth: The second third was fairly in line with the first third. I was picking up those cream, leather and hay notes, and the finish was that of tobacco, earth and sweet spices. I would classify the cigar as being between medium and medium-full in strength and body.
John: The second third started wood forward, with baking spices in the middle and a baking spice and wood finish at medium strength. The wood almost moves into the center of the profile as it settles in. As the cigar progresses towards the halfway point, bread returns to the retrohale. The profile is primarily wood focused in the bottom half of the second third.
Jiunn: The second third’s flavor profile becomes deeper in the sweeter Hawaiian bread notes and tapers down on the burnt aspects. There’s some increased general spice (baking spices). Strength and body is still medium. 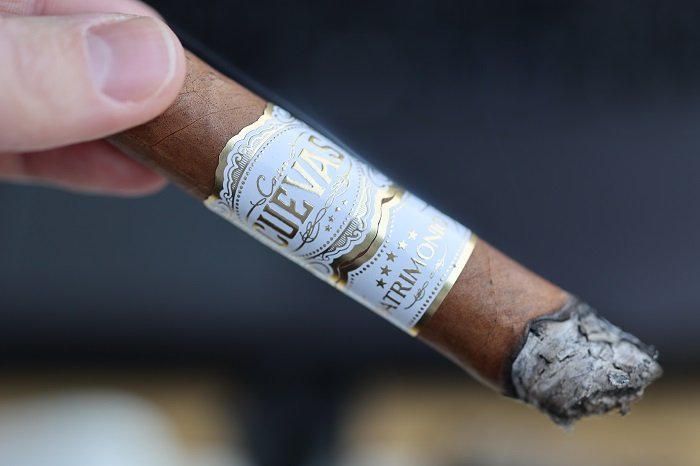 Aaron: The final third begins with the musty, toasted cedar just ahead of the chalkiness while faint floral and black pepper notes are in the background. The retrohale is now musty, toasted cedar with light chalkiness. At an inch in, the cigar begins to warm up and a vegetal note joins the profile. The cigar wraps up with musty, toasted cedar up front with the vegetal and chalky notes in the middle and light floral and black pepper notes in the background. The strength remained at medium.
Seth: The final third delivered a flavor profile that was more pepper, cedar and earth than anything else. I was not getting those cream notes from before, but there were some leather and hay aspects on the finish. Medium-full in strength and body.
John: A wood and bread combination took the cigar into the last third. The finish is a combination of wood and baking spices again, but the strength is up to medium. The center becomes bread focused as it progressed.
Jiunn: The final third gets a bit sharp. A bit of a charred baking spice. But I still get plenty of the sweet bread and cedar notes. Strength and body finish the same medium. 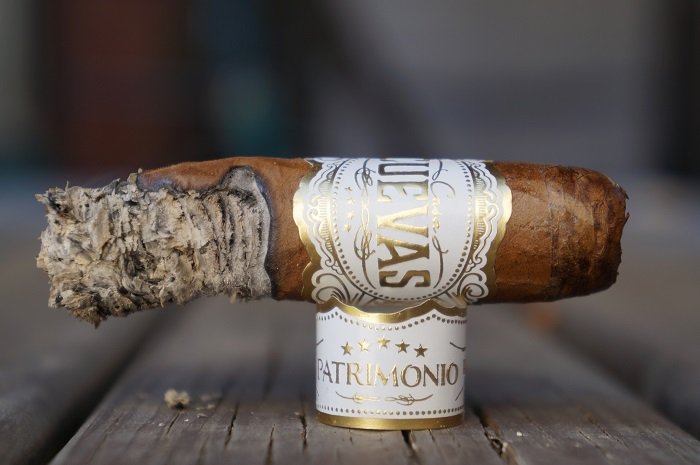 Aaron: The burn was perfect through the first half and then became a bit wavy the rest of the way. The ash held on in inch and a half increments.
Seth: Great burn throughout.
John: The burn started straight with a respectable two inches of ash before I tapped it off to avoid wearing it. The burn became uneven through the second third, eventually requiring a touch-up. The burn was uneven again in the last third requiring a second touch-up.
Jiunn: A couple minor issues with the burn. Slightly flowery ashes and the wrapper is quite fragile, which causes a little uneven burn. 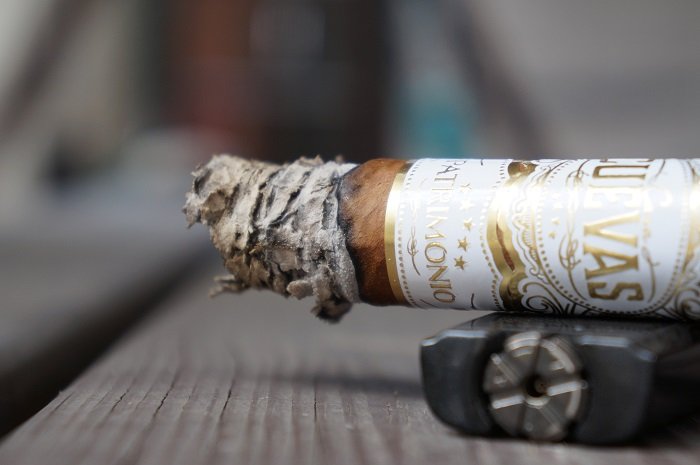 Aaron: The draw was a bit tight to start and then got a bit tighter in the final third.
Seth: Perfect draw from start to finish.
John: The draw had some resistance to it, roughly 2-1/2 – 3 notches towards the resistant spectrum.
Jiunn: The draw was slightly snug. Just shy of perfection.

Aaron: The cigar had quite a few transitions through the first third and then settled in during the second third. The final third warmed up and gained a vegetal note as the draw tightening did have an effect on flavor. Overall, the Casa Cuevas Patrimonio Toro started well, but the chalkiness in the second third brought the profile down a bit. The nuanced components through the first half were quite nice and showed off the blend. I’d be interested in revisiting this, along with another vitola to see how it would do and in hopes of a better draw.
Seth: I am not sold on this Casa Cuevas Patrimonio Toro, and I think I need to come back to a couple more down the road. I feel like it has some youth to it, and it has not fully opened up. There is a potential for potential. I could be completely wrong too. I did enjoy the cream, leather and sweet spice notes throughout, and the increase in strength and body was enjoyable. I would love to see how this cigar is in six months, has a smaller ring gauge and a more open draw. A Lonsdale offering with a fantail cap would help with appearance points.
John: The Casa Cuevas Patrimonio Toro was pleasant and enjoyable for the review with the greatest amount of complexity coming through with the first third. Although the second third still had similar flavor components, they weren’t quite as well integrated as the first third. The draw had some resistance to it, and there were two touch-ups required through the review. I would smoke the Patrimonio Toro again, it was a pleasant cigar on the milder side of medium. Total smoking time was a very respectable 2 hours and 16 minutes.
Jiunn: Overall, delicious. I liked how the cigar touched the major areas to be qualified as a good cigar (sweet, spice, earth). This is really no different than all the Casa Cuevas offerings I’ve had, ie balanced and focused on flavors instead of strength. If you’re a fan of other offerings from the brand, this will no doubt please you too.