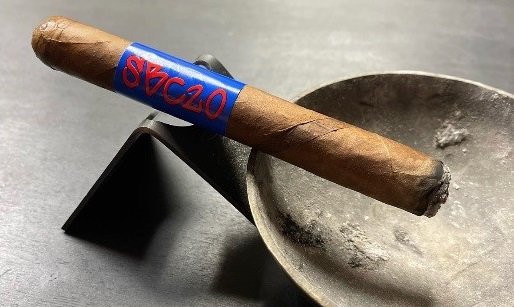 6 years ago, We entered the limited edition cigar arena with SBC 16, a barber pole design with a distinct look and bold band. After a year off, the cigar returned with the fitting name change to SBC 18, as well as a change to the primary wrapper, but kept pretty much everything else the same as the original. Now another two years has passed and we present the SBC 20! That means another 5 1/2 x 46 corona gorda vitola with the primary wrapper now an Ecuadorian Habano and Brazilian Mata Fina barber pole while the binder and filler both hail from Nicaragua.

As for the name, SBC stands for Surrounded by Champions. Champions like Mike Palmer and Chet Atwell amongst many others that make the brand possible.

A description inside the box of the original explains the meaning:
This truly limited cigar has a production of only 250 boxes (20 Count). It’s important to recognize that great accomplishments require the team to be successful. Too often we see success only as a face of a single man. Surrounded by Champions is a cigar that pays homage to the people that made Powstanie possible. The main ingredient of greatness is the rest of the team.

SBC20 should begin to ship to retailers next week. MSRP is $18 per cigar.