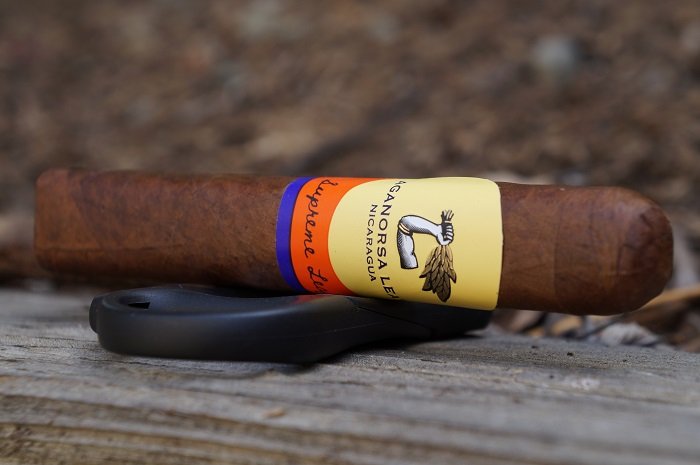 Aaron: The wrapper on the rectangle pressed Aganorsa Leaf Supreme Leaf Robusto 54 is a marbled medium brown and has a couple of decently raised veins present. The foot is covered with folded over wrapper leaf. The seams are smooth and the caps well applied. The band is a pastel yellow, orange and purple that carries the company name, logo and line name. The aroma from the wrapper and covered foot is damp earth and hay. The pre-light draw gives me an interesting chocolate covered cherry note along with some cedar and a mild spiciness on my lips.
Seth: The Aganorsa Leaf Supreme Leaf Robusto 54 is attractive, and I find the wrapper to have this lovely Colorado Maduro to Maduro coloring. Nice coffee bean to chocolate bar coloring. There are small to medium sized veins present throughout, and the cigar is rolled well and firm throughout. Aromas of sweet earth, damp wood, tobacco and spices on the foot and wrapper.
John: The Aganorsa Leaf Supreme Leaf Robusto 54 comes in cellophane, and has a UPC sticker with an integrated tear point so it remains intact when the cellophane is opened. The cigar is single banded, and has an additional artisanal complication of a closed foot. On closer examination, it also looks like the foot has a very subtle soft box press to it as well. For aromas, I was smelling sweet bread and wood from the wrapper. From the closed foot, I couldn’t get anything beyond tobacco.
Jiunn: The Aganorsa Leaf Supreme Leaf Robusto 54 has a nice, near Colorado Maduro, oily wrapper. Veins are neatly pressed, seams tight, bunch and roll slightly lumpy and head well wrapped. Aromas from the wrapper and foot tell abundant barnyard and toasted nuts. Cold draw give plums, cedar and barnyard. 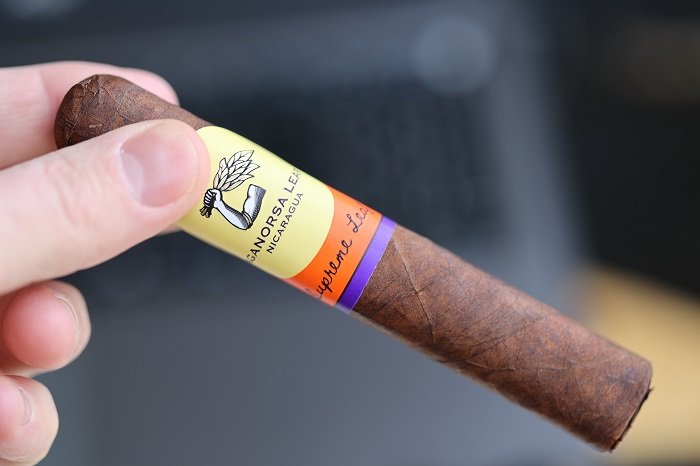 Aaron: The cigar begins with toasted cedar and a slightly punchy baking spice. At a quarter inch in, the baking spice has transitioned to a bold black pepper. At a half inch in, a light, dry earth joins in and the pepper mellows in fullness. The retrohale is toasted cedar, mild black pepper and light, dry earth. As the third comes to a close, the toasted cedar is a bit ahead of the dry earth, with the black pepper just a bit further behind. The strength was right at medium.
Seth: The first third starts out by delivering some peppery spice qualities, and is paired with some dry earth, leather, cedar, mineral and soft lemon notes. It is mostly earthy with some dry cedar and a finish of mineral qualities. Medium in strength and body.
John: My first few puffs are flavors of sweet wood giving way to lingering earth and a solid punch of medium-minus strength red pepper flake on the post draw. Creamy spices, wood and pepper flake make up the retrohale in an interesting combination. As the first third settles in, some dark chocolate works its way into the retrohale. By the halfway mark, wood combines with lingering earth. Dark chocolate has transitioned to powdered cocoa, and brings with it tannic wood as accents at light-plus.
Jiunn: The first third is spice (red pepper and cinnamon) and mineral heavy, with the softer side of bread and toasted nuts less evident. The spiciness is matched pretty much immediately by a noggin jarring medium-full strength (medium body). Retrohaling is intense with minerals and dry red pepper spice. The finish is a bit lacking, with only a rear palate cedar coming through. 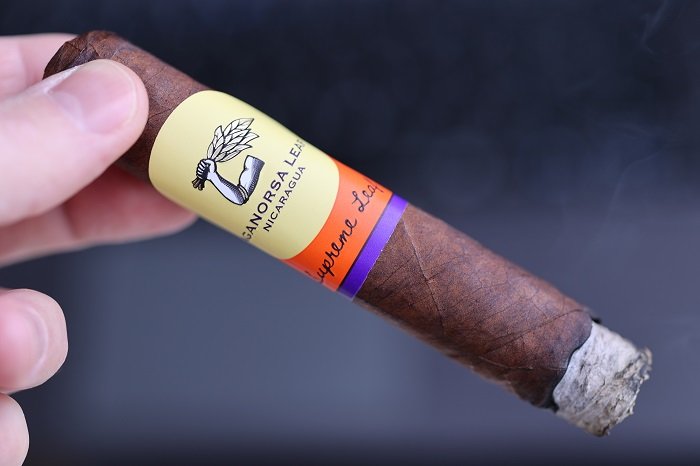 Aaron: As the second third begins, a faint creaminess becomes present. At a half inch in, the dry earth is now right behind the toasted cedar. The retrohale is now toasted cedar and dry earth. At an inch and a quarter, the toasted cedar and dry earth are now even. As the third wraps up, the toasted cedar and dry earth are even with black pepper and faint creaminess in the background. The strength has bumped up to slightly above medium.
Seth: The second third is less spicy than the first third, and I am picking up more earth, leather and cedar qualities. It is smoother, creamier, and I am not getting any mineral or citrus qualities from the first third. Again, medium in strength and body.
John: Creamy baking spices carry the start of the second third, as spice and wood finish the draw and a delayed earth comes into the post draw. That earth starts to define the post draw as the second third settles in. Moving towards the halfway point, sweet bread and spicy wood define the retrohale.
Jiunn: The second third’s profile softens up such that the spice and mineral levels are less demanding. But the softer notes of bread and toasted nuts is somehow still taking a seat in the second row. Strength is still overall medium-full and body medium. 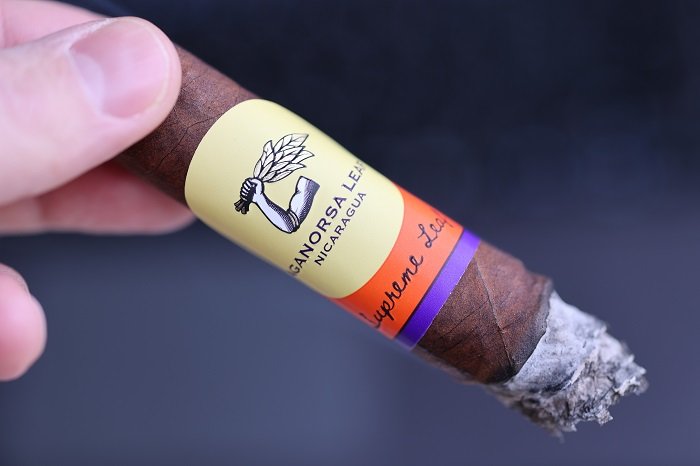 Aaron: As the final third begins, the black pepper picks up a bit. At a half inch in, the toast level increases. The retrohale is an even mix of toasted cedar and dry earth with light amounts of black pepper and creaminess. At an inch in, the black pepper departs from the profile. As the cigar wraps up, the profile is an even mix of toasted cedar and dry earth with light creaminess in the background. The strength remained at slightly above medium.
Seth: The final third delivers that profile of cedar and earth. Soft spice with some nutty and creamy qualities. Leather as well. Medium in strength and body. Still solid, but lacking from the second third.
John: The last third starts things with tannic wood, as wood and earth combine into the post draw. Medium, almost medium-plus baking spices return to the retrohale after just a puff or two. As the last third progresses, earth moves to the front of the profile. Bread comes back by the halfway mark, but it’s being overpowered by both the earth and the wood notes.
Jiunn: The final third picks up a sharper dried vegetal note. The overall flavor profile has the same vibe as the second third. Upfront dry red pepper spice, minerals, followed by bread and toasted nuts. Strength and body is unchanged. 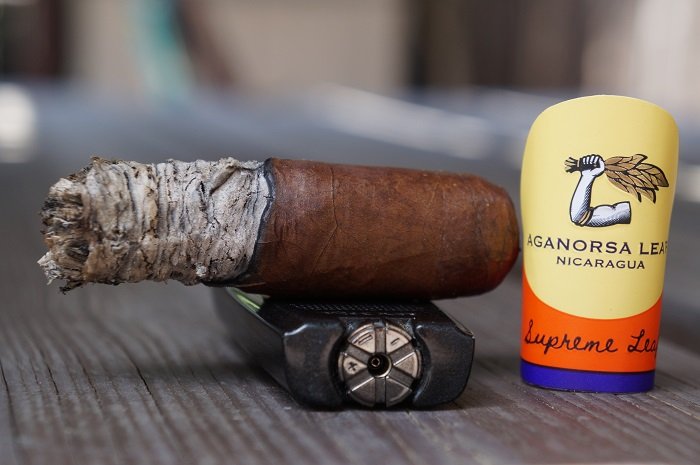 Aaron: The burn line was slightly wavy, but never needed any attention. The ash held on to the halfway point and then again until the end.
Seth: Burn was solid in the beginning, but it got a little wavy in the final third.
John: The burn started straight, becoming mildly uneven by the halfway point of the first third. A touch-up was required at that point. Some time into the second third, part of the wrapper wasn’t burning and a second touch-up was required.
Jiunn: Burn performance was respectable but had it’s faults. The main negatives being a complete re-light within the second third and a few touch-ups. 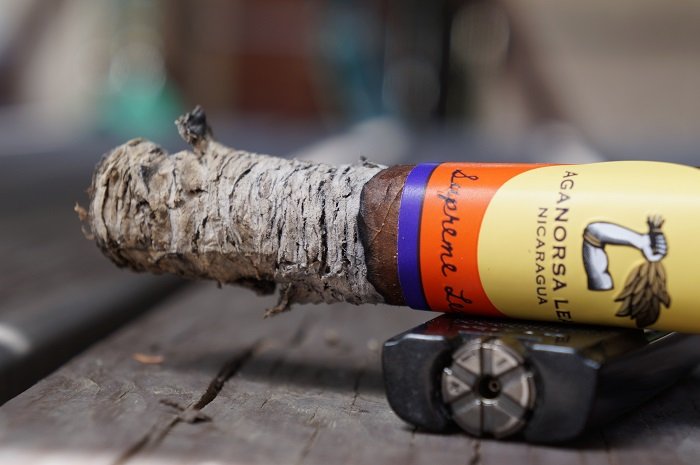 Aaron: The cigar began with toasted cedar and a slightly punchy baking spice. The baking spice transitioned to black pepper fairly quickly and some dry earth joined a bit later. The second third saw a faint creaminess join in and the final third saw the black pepper depart. The construction was great, aside from a slightly wavy burn. The Aganorsa Leaf Supreme Leaf Robusto 54 started with a nice flavor profile and then dropped a level in the second third as the dry earth built up and maintained that level the rest of the way. The flavor profile was on par with the 52 ring gauge Robusto we reviewed previously, but the construction was much better. I don’t really see myself coming back to this often, but it is one of the better Aganorsa offerings recently.
Seth: I have never been blown away by the Supreme Leaf offerings, and that is the case for the Aganorsa Leaf Supreme Leaf Robusto 54. I did not find it to be unpleasant, but there was nothing memorable about the cigar. There was nothing supreme. The profile seemed lacking, and almost blended to be softer as to not offend anyone. It felt like they were holding something back. Draw and burn were good throughout, and in some ways an improvement compared with other releases from the company.
John: The Aganorsa Leaf Supreme Leaf Robusto 54 delivered some tasty and at times slight over medium intense flavor combinations. I don’t recall the previous size we reviewed having this much intensity, but it was enjoyable. The burn and draw were good, with two touch-ups required to intervene and some resistance on the draw. Typically I don’t find the larger ring gauges land in my wheelhouse, but the Robusto 54 Supreme Leaf delivered. Total smoking time was 2 hours and 1 minute.
Jiunn: I’m not liking the general trend of TABSA cigars within the last 2 – 3 years. There’s an overall shift of the flavor profile trending to spice and mineral, with less softer notes. It used to be the opposite of that, where the profile had plenty of soft notes, and the spice and mineral levels only helped with making the profile more enjoyable and balanced. The Aganorsa Leaf Supreme Leaf Robusto 54 is less raw with spice and minerals (especially on the latter two thirds), but the profile is far from being cohesive. I still hold hope and wait for the great days of TABSA again.