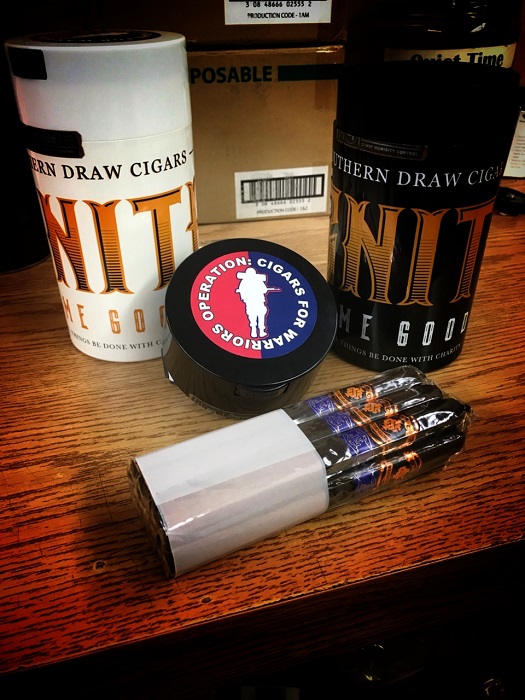 Austin, TX. – Born from the new charitable strategy, IGNITE some good and produced at the A.J. Fernandez Cigar Co. in Esteli, Nicaragua, the Jacobs Ladder Lancero makes its debut in an exclusive box pressed format known as the TOP RUNG at Casa de Montecristo which coincides with the Texas Cigar Festival. The box pressed lancero in this award winning premium cigar blend is a limited exclusive release and will be available in a number of Casa de Montecristo retail locations.

Southern Draw Cigars arrives in Houston for the Texas Cigar Festival with an announcement of this limited release. With rarity comes quality and consumers will certainly want to burn a few of these beautiful lanceros and experience the complexity and craftsmanship while they directly support the charitable cause, Operation Cigar for Warriors through generous financial and cigar contributions. Available only in the 10 count humidified jars under the IGNITE brand, the TOP RUNG is the first of five special releases scheduled for 2018.

“We are excited to partner with Robert and Sharon Holt and the Southern Draw family on the release of the IGNITE project. As the largest brick and mortar cigar lounge chain in the country and the first retailer to receive and offer these for purchase, we feel that our customers will be just as excited as we are to try these exclusive items. The IGNITE jars will be first available at our Texas Cigar Festival in Houston, TX on April 14th 2018. Shortly after, you’ll be able to purchase these at many of our 20 retail locations, including our newest additions in Tampa, FL. until our limited supply is gone,” stated Ernie R. Watson, Sr. Merchandise Manager, Casa de Montecristo Inc. Ernie also added an important note “We believe this is just the first of many steps in aligning Casa de Montecristo with trends and exciting projects that make this industry so unique.”

Southern Draw Cigars remains committed to providing the highest quality products to the market and just as its done with all cigars in their line, each IGNITE jar will contain a donated 69 – percent RH pack from Boveda. “Boveda is proud to be part of this exciting and innovative IGNITE project that Southern Draw Cigars has orchestrated. Boveda believes in supporting initiatives like these that serve our US military and its veterans, grass roots charities and premium cigar rights. Each of these unique jars will be packaged with Boveda’s 2-way humidity control from the factory, ensuring the customer is provided the best smoking experience by delivering the cigars in ideal smoking condition” added Tim Swail, Executive Vice President of Sales for Boveda, Inc. an IGNITE project sponsor and the global leader in 2-way humidity control.

Southern Draw Cigars, Casa De Montecristo and Boveda Inc. have selected Operation Cigars for Warriors as the initial beneficiary of the IGNITE project.