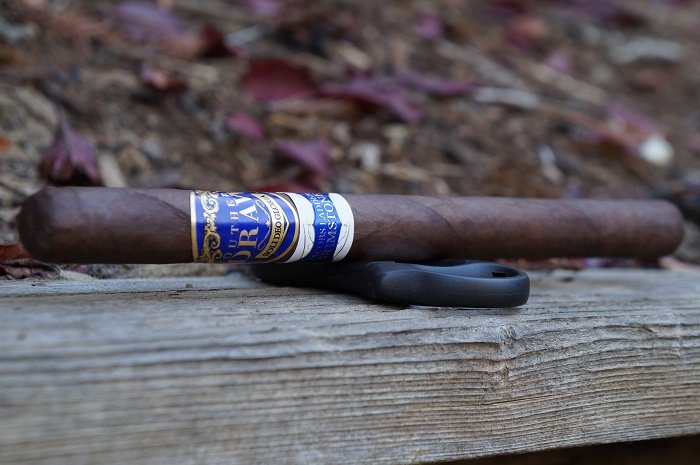 Aaron: The immense length is the first thing that catches your eye of this dark brown wrapped Southern Draw Jacobs Ladder Brimstone Un Presidente. The veins are all well pressed and there is some fine tooth present. The seams are easily visible as they are slightly raised, the head is well finished and the foot is covered with excess wrapper folded over. The cigar has two bands, with the primary carrying the traditional company design but with a bluish purple and gold for this line. The secondary band is white, bluish purple and gold and designates the line. The aroma from the wrapper and closed foot are a complex combination of musty, damp wood, dark earth, smokiness and light cocoa. The pre-light draw brings airy cedar with a mid level spiciness on my lips.
Seth: The Southern Draw Jacobs Ladder Brimstone Un Presidente is a little wavy, but firm in hand and finished with a nice cap. The wrapper has a texture between fine grit and leather, and there is some tooth throughout. There are shiny specks throughout the wrapper, and it adds some pop to the maduro coloring. The foot is closed, but I am picking up an aroma of rich earth, baking spices, chocolate and tobacco.
John: The Southern Draw Jacobs Ladder Brimstone Un Presidente is double banded, a closed foot and has a tear point on the cigar sticker that leaves the UPC intact on the cellophane. Aromas from the cigar included aged wood, tobacco and barn wood. From the foot, light raisin and hay which surprised me given that the foot was closed.
Jiunn: The Southern Draw Jacobs Ladder Brimstone Un Presidente has an oily and uniform maduro wrapper shade. Veins are well pressed, seams tight, bunch and roll even and head well wrapped. Aromas from the wrapper gives wet earth, barnyard and cedar. Cold draw gives black tea and hay. 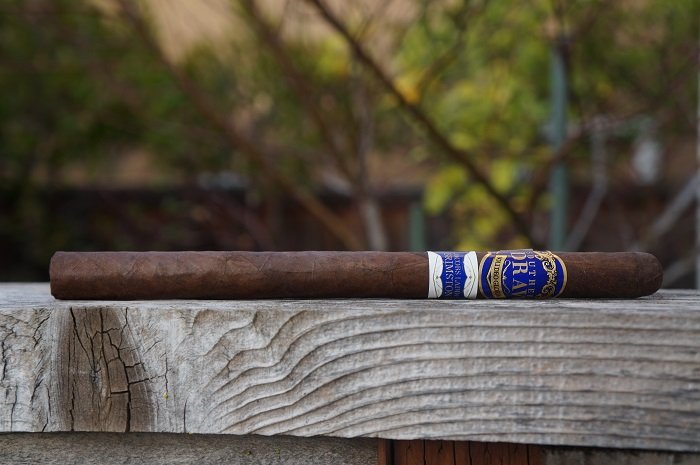 Aaron: The cigar begins with dark wood, earth and cinnamon. At a quarter inch in, some mustiness joins the profile. At an inch in, the cinnamon has transitioned to a more general baking spice as light cocoa powder has joined. The retrohale brings a mirror image of the mouth draws aside from the baking spice that brings a bit of a zing. At two inches in, the dark wood, earth and baking spice are all even with the mustiness and cocoa powder a bit behind. The strength in this third was slightly above medium.
Seth: The first third opens up by delivering rich earth notes that are paired with some stone fruit qualities. There are baking spice notes present as well, and the finish is of damp earth and seasoned wood. In terms of strength and body, the cigar smokes at a level between medium and medium-full.
John: The cigar opens with sweet cedar and trailing light pepper. Creamy wood is present on the retrohale. Raising sweetness joins the retrohale as it settles in. My initial impression is that it’s quite mild and subdued for a Jacobs Ladder release. As the cigar progresses, cedar moves into the middle of the profile. Light plus baking spices join the retrohale in the bottom half of the first third. Shortly after, a light plus stone fruit sweetness comes through.
Jiunn: The first third has notes of damp earth, hay, cedar and a tingling sensation on the tongue from a zippy red pepper spice. Retrohaling boosts greater red pepper spice, coffee beans and minor honey. Strength is medium-full and body is medium. 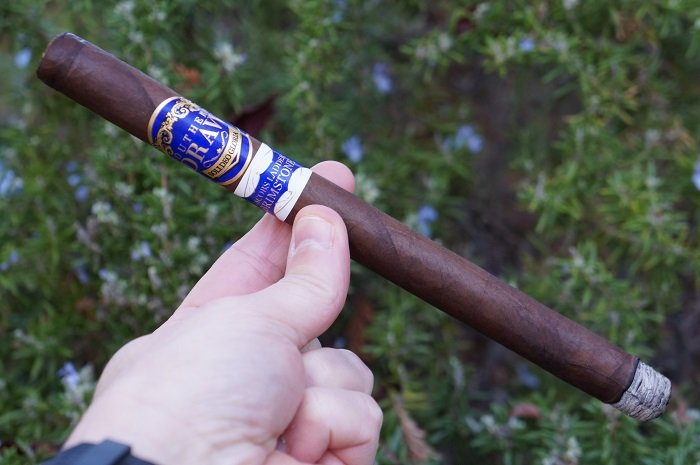 Aaron: As the second third begins, the wood doesn’t seem as dark and the earth is a bit dryer. At three quarters of an inch in, the baking spice has transitioned to black pepper and the cocoa powder has left. The retrohale is musty wood and dry earth. As the third comes to a close, the wood gains a light char while the earth is fairly dry. The black pepper remains even with the components up front and some mustiness remains in the background. The strength remains and slightly above medium.
Seth: The second third shows some improvement and I am picking up some coffee bean notes that are pairing lovely with the chocolate, rich earth and spice notes from before. There are some wood notes present as well, and it is smoking at that level between medium and medium-full.
John: Baking spices at medium strength take the cigar into the second third along with chocolate. Baking spices are present on the post draw almost immediately at light plus strength, along with some cedar. Light bread tries to break through on the retrohale as the sweetness joins the post draw.
Jiunn: The second third has a couple minor changes. First, the hint of honey within the first third is entirely gone. Second, the profile picks up a chalkiness to the profile, most realized on the finish. And finally, the spice levels are mainly on the retrohale. Other than that, it’s still lots of damp earth and cedar. Strength and body is still medium plus and medium. 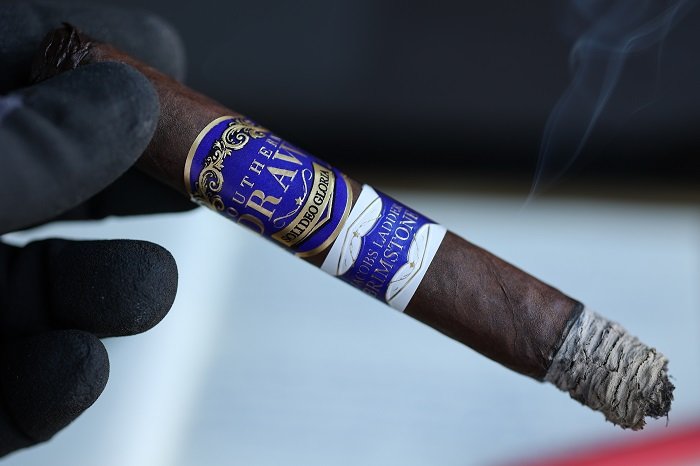 Aaron: The final third continues with the even mix of lightly charred wood, dry earth and black pepper with mustiness in the background. At three quarters of an inch in, the char picks up a bit. At an inch in, a slight bitterness joins the profile. The retrohale remains musty wood and dry earth. At an inch and a half in, the black pepper has departed. The cigar wraps up with the charred wood, dry earth and light bitterness. The strength in this third bumped up to medium-full.
Seth: The final third delivered a flavor profile of rich spices, earth, chocolate and wood. It is fairly in line with how the cigar has been throughout. In terms of strength and body, the cigar is smoking between medium and medium-full.
John: Bread, baking spices and a sweet wood finishing as the last third kicks off. Light cedar settles into the middle of the profile as the cigar settles in. Tannins join cedar on the post draw as it progresses. Light earth joins some time later at the end of the draw, and eventually pushes into the post draw. That earth continues to evolve, pushing into the middle of the profile approaching the halfway point. Some bitterness forms on my lips in the bottom half.
Jiunn: The final third shows some astringencies to the profile, casting a cloud of sharpness and metallic combination to the overall damp earth and cedar profile. Strength and body finishes the same medium-full and medium. 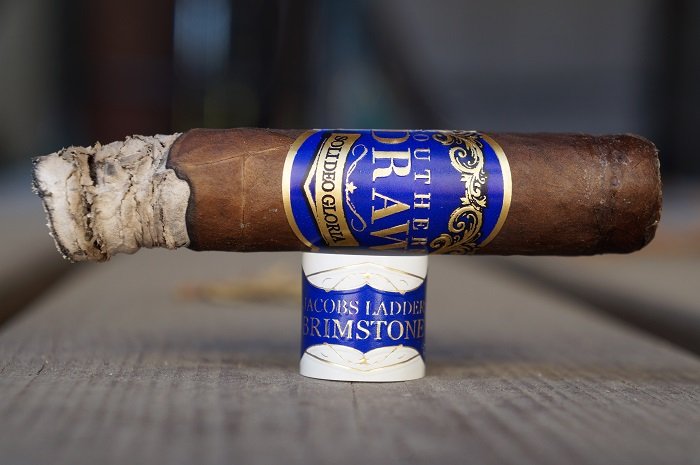 Aaron: The burn was straight until the final third when it got a bit wavy but didn’t need any attention. The ash held on in inch and a half increments.
Seth: A well constructed cigar, a nice burn line was delivered throughout.
John: Given the stupendously large nature of this cigar, the burn was quite straight throughout the entire review, quite an accomplishment. Ash held on in almost exactly 1-1/2″ increments, falling in my lap the first few times before I became wise.
Jiunn: Burn performance was solid aside from a few instances of flowery ashes. Other than that, even burn, ample smoke production and cool burning temperature. 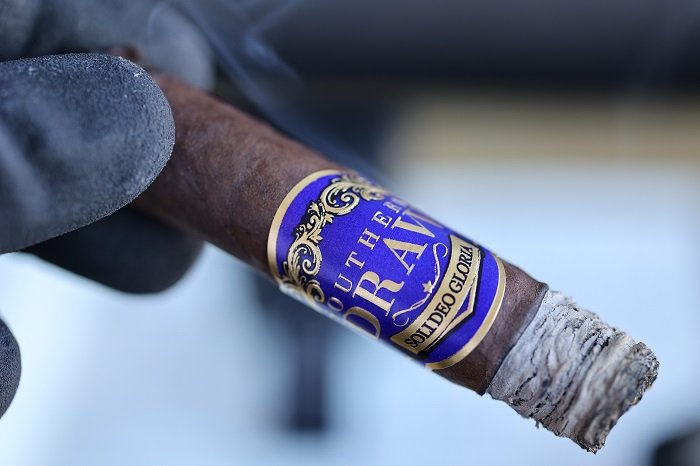 Aaron: The draw was slightly tighter than I prefer, but didn’t cause any issues with the smoking experience.
Seth: Very good draw throughout. Well constructed cigar.
John: The draw started out resistant, roughly 3-1/2 to 4 notches into the resistant spectrum. The draw opened to 3 to 3-1/2 notches as it settled in, and then eventually 2-1/2 to 3 notches for the majority of the smoking experience.
Jiunn: The draw was great, giving the ideal air flow and resistance.

Aaron: For a cigar of this size, it’s difficult to maintain a blend that can maintain a profile that engages your palate the entire time, and the Southern Draw Jacobs Ladder Brimstone Un Presidente had that same struggle. It started well, but lost complexity as it went along. The final third was a bit monotonous and I would have been fine with just the first two thirds. I’m sure people that are fans of the line will find this enjoyable, but for me, it’s just a bit too much cigar. I probably won’t come back to this due to the time commitment and the profile of the final third, but would go back to the original size for this line.
Seth: A little bit bigger than a Giant Corona, the Southern Draw Jacobs Ladder Brimstone Un Presidente is a cigar that is too big for what is delivered. Whenever a cigar of this size is produced, it is going to be challenging to deliver a flavor profile that is complex throughout. The Brimstone Presidente is a solid cigar, but it does not show much complexity or transitioning throughout. Some might say it is a great cigar to smoke while watching a game, but I disagree. For a flavor profile like this, I would rather have it be in a Corona offering. But, you have to be able to condense and deliver complexity. Also, I don’t know why you would release a cigar of this size in the winter.
John: The Southern Draw Jacobs Ladder Brimstone Un Presidente is one of the better large format cigars that I’ve ever reviewed. Even though large format cigars aren’t usually my preferred format, the flavors here are interesting enough to keep me engaged for the first two thirds, but not so intense that my palate was burned out from the intensity. The blend seems to be tweaked down in strength from the other Brimstone offerings, and I think that was a good decision. Construction was excellent, with a razor sharp burn throughout and a good draw. Total smoking time was 3 hours and 2 minutes.
Jiunn: Almost four hours of smoking this behemoth on a Friday night. My overall impression is, it is an average cigar. For cigars commanding this long of a smoking time, it first needs to grab my attention from the get go. Once it successfully does that, it needs to keep my attention by having some nice transitions and/or build ups. The Southern Draw Jacobs Ladder Brimstone Un Presidente did not grab my attention from the get go, but did provide some good transitions within the second third. It broke away from just damp earth and cedar, giving a chalky consistency and good levels of spice on the retrohales. Purely based on size of the cigar, this isn’t something I’d reach for very often, especially due to how average the cigar started out. But a nice option to have for a marathon smoking session.