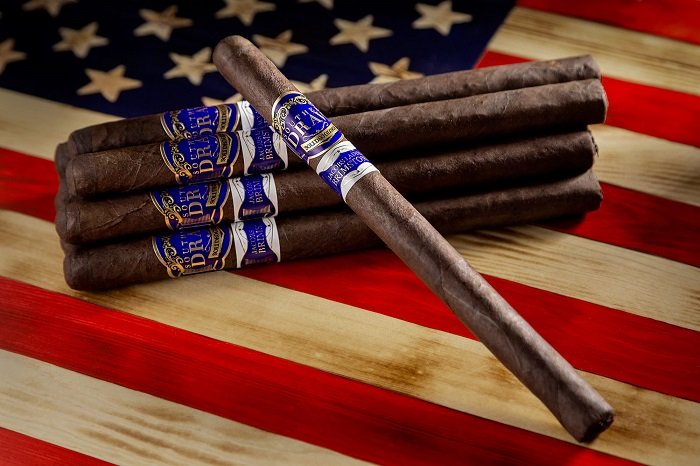 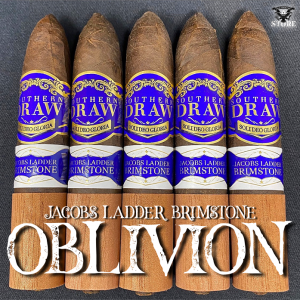 “Consumers have now been enjoying the bold but approachable Jacobs Ladder blend for years, but we have developed two new ways of celebrating the triple-ligero Brimstone version after a gracious reception of the 2019 Brimstone release,” said Ethan “Jacob” Holt, the namesake of the blend. “We decided we should make those looking for an “overproof” or stronger than normal smoking experience, a size that truly demonstrates the predominantly bold flavors and aromas of this blend. Joining our great friends at Cigar Federation, the king of the limited releases, we introduce a Perfecto 5.0×58, where we have substituted the filler combination with stronger than the original ligero tobaccos, a truly full bodied blend for those demanding palates. A Cigar Federation exclusive version we have dubbed, OBLIVION, for those that smoke this cigar, the name will almost certainly be justified.” Ethan continues, “for those, myself among them, that enjoy the original Jacobs Ladder Brimstone blend but have a desire for a thinner ring gauge and the ability to prolong their smoking enjoyment (without the necessity of cutting and lighting another cigar), we are introducing a Gran Corona 9.0×48 size. This cigar is regal looking and offers a delicious flavor combination and a subtler full body that is unique to this blend, AKA Un Presidente in honor of some of the classic Cuban cigars that have utilized these special size 9.0×48 cigar molds.”

Cigar Federation is releasing only 4,000 cigars initially, and these will go very fast. “Our friends at Southern Draw have been creating some of our favorite cigars over the last few years. Frankly, some of the best in the industry. So, the bar was set exceedingly high for the new Oblivion release. But I gotta tell you, when we first lit it up, it more than exceeded our high expectations…it blew them into oblivion!” -Chris Kelly, co-owner Cigar Federation, Ezra Zion Cigars, Nomad Cigars.

“Oblivion is a cigar for the experienced boutique smoker. Novices need not apply! This is some of the fullest bodied, most delicious ligero tobaccos I have tasted. An absolute must smoke!” —Kyle Hoover, co-owner Cigar Federation, Ezra Zion Cigars, Nomad Cigars. Pricing has been set at $49.95 per 5 pack, with options for 10 and 20 count purchases for Cigar Federations loyal consumers to be made available on October 19, 2020.

The second new release, Un Presidente, is not a political statement by any means as it is purely a coincidence that it is being released on the eve of major U.S. elections, but rather a respect to some phenomenal Cuban classic cigars of similar or the same size. Un Presidente is a full-production release of Southern Draw, scheduled in four annual releases of 16,000 cigars. Each Un Presidente cigar has been nestled in a handmade “petaca” or wooden cigar box and then packaged in complementary colored five count wooden tray that was designed to display the eye-catching “Jacobs Ladder blue” boxes which are accented with gold clichés. The cigars have been aged for 10 months, delivering the desired, slight “mellowing” of the otherwise bold blend. The resulting flavor is well balanced for such a large sized cigar.

Un Presidente is available to all valued retail partners of Southern Draw, on a first-come, first served basis, MSRP is $15.00 per cigar, $75.00 for a five-count display tray, prices will vary based on related taxes and shipping charges. A limited amount of ten-count bundle refills will be made available for $150.00. Shipping approximately November 1, 2020.

Jacobs Ladder is the popular cigar blend named in part for Ethan Jacob, the son of Founders, Robert & Sharon Holt.