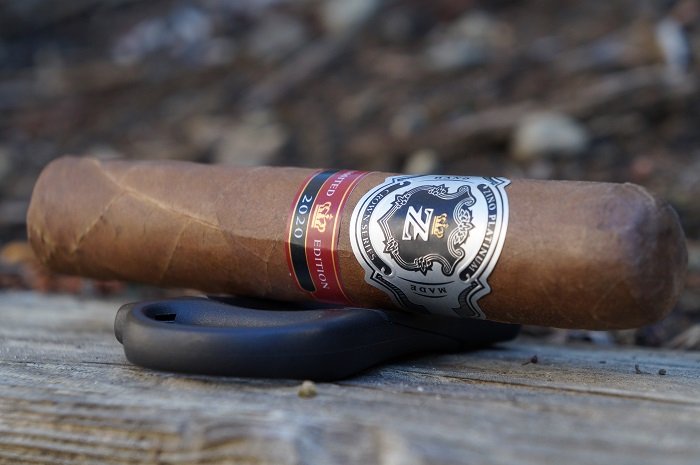 Aaron: The wrapper on the Zino Platinum Crown Series Limited Edition 2020 is light brown with a network of decently raised veins that carry a lighter color to them. The seams are easily visible as they are a bit raised while the head is finished off with a well applied double cap. There are two bands, with the primary being the traditional silver, black and gold band for the brand while the secondary band is dark red, black and gold and designates that it is a limited edition for 2020. The aroma from the wrapper is quite light and brings sweet cedar and a very subtle spice. The foot on the other hand is a full mix of honey graham cracker, cedar and trailing crushed red pepper. The pre-light draw brings a mix of honey sweetness and cedar and there is a pretty full spiciness on my lips.
Seth: Silky in texture, the Zino Platinum Crown Series Limited Edition 2020 delivers aromas of spices, leather, wood, tobacco and cream. The wrapper has a lovely Colorado coloring with medium sized veins present throughout. It is firm in texture and there is a lovely cool draw that delivers many of the notes from the aroma.
John: The Zino Platinum Crown Series Limited Edition 2020 has a UPC sticker on the cellophane that tears in half when the cellophane is opened. The cigar itself is double banded, and the wrapper is smooth, and chocolate brown in color. For aromas, I was able to pick up saltine crackers, bread, with the saltiness really coming through on careful examination. Hay and faint raisin were present from the foot.
Jiunn: The Zino Platinum Crown Series Limited Edition 2020 has a stout Colorado Claro wrapper shade. Veins are fairly well pressed, seams tight, bunch and roll even and head well wrapped. Aromas from the wrapper give ample barnyard and some cedar. Aromas from the foot tell pungent white pepper and cedar. Cold draw reveals dried nuts and cedar. 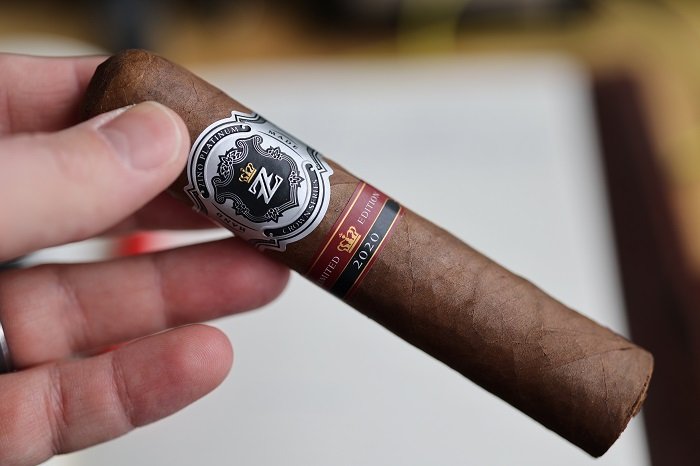 Aaron: The cigar begins with a toasted, young cedar, cinnamon and mustiness. At a quarter inch in, the cedar loses the youngness. At a half inch in, the cinnamon is gone and the profile is lightly toasted cedar, mustiness and some dry earth in the background. The retrohale brings a heavier toasted cedar and mustiness. As the third comes to a close, the dry earth is now right behind the toasted and musty cedar. The strength in this third was slightly below medium.
Seth: The first third begins with some cedar and cream notes. I am picking up some sweet spice notes, touches of cinnamon and it is paired with leather and lightly roasted coffee beans. There is this mushroom barnyard quality, and it is medium in strength and body.
John: Hay and mild cocoa, both at a very light intensity to kick off the first third. Light wood sits on the palate between draws. Baking spices at medium strength, with a pepper finish come through as the cigar progresses. Some musty notes are present on the retrohale a short time later. In the bottom half, a citrus note serves to accent the flavor medley.
Jiunn: The first third provides flavors of stale cedar, burning paper and dried nuts. Retrohaling gives red pepper spice and baking spices. The finish holds some grit in minerals and stale cedar. Strength and body is medium. 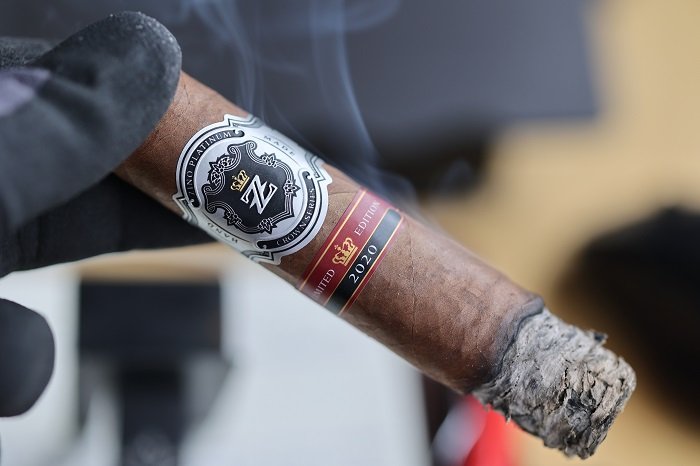 Aaron: The second third continues with the toasted cedar up front while the mustiness has dropped the mushroom note and the dry earth is right behind. At a half inch in, all of the components are even. The retrohale is a mirror image of what I get on the mouth draws. At an inch in, the toasted note becomes pretty heavy. The third wraps up with heavily toasted cedar, dry earth and light mustiness. The strength in this third bumped up to medium.
Seth: The second third delivers more baking spice notes and I am getting some cream and coffee with that. There are touches of leather, cedar and earth, and the finish has this mocha quality. Nice change from the first third while delivering enjoyable flavors. In terms of strength and body, I would say the cigar was around a medium level.
John: Mild baking spices, cedar and bread lead the cigar into the second third. A light plus cedar consistently sits on the post draw palate. As the cigar settles in, a mild sourness accents the cedar. Overall, the second third was pleasant, but mild.
Jiunn: The second third picks up a bitterness to the already staleness in cedar and burning paper. The combination of bitterness and staleness seeps through on the finish the most, making it quite drawn out. Strength moves up to medium plus and body remains medium. 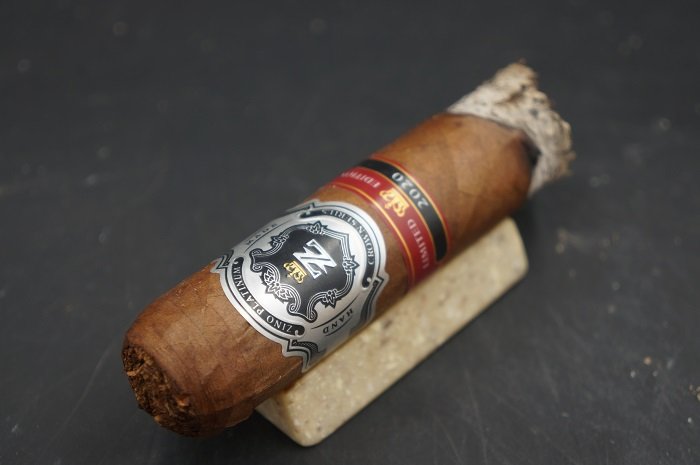 Aaron: The final third continues on with the heavily toasted cedar, dry earth and light mustiness. At a half inch in, the heavy toast has transitioned to char and the overall profile is now fairly dry. The retrohale remains toasted cedar, mustiness and dry earth. At an inch in, the char has built up as the cigar warms up and there is a slight pine bitterness appearing. The cigar wraps up with heavily charred cedar, dry earth and light mustiness and pine bitterness. The strength in this third bumped up to slightly above medium.
Seth: The final third delivered some herbal, floral, coffee and baking spice notes. The cream and mocha qualities were not as present, and the leather was gone entirely. Like before, medium in strength and body. Not as complex as the first or second third, but a solid finish.
John: Mild cedar and bread take the Platinum Crown Series Limited Edition 2020 into the final third. Baking spices at light plus strength finish each draw. Sour citrus begins to hit in the middle of the profile, serving to accent other flavors. As the last third progressed, a toasted quality joined, increasing in intensity. By the bottom half, a bitterness has joined as well.
Jiunn: The final third is unchanged from the second third. Still medium plus strength, medium body, with flavors of bitter nuts, stale cedar and burning paper. These flavors are still long and lingering on the palate. 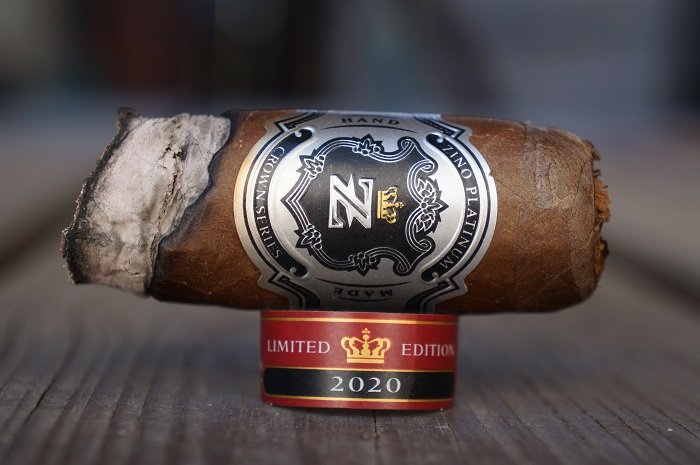 Aaron: The burn was fairly wavy throughout and required two touch-ups to keep things in line. The cigar also went out once in the second third, requiring a re-light.
Seth: Decent construction and burn. I would except more from Davidoff and Zino, but overall not a problem on the cigar.
John: The burn was consistently amazing throughout. At several points the ash built up to 1-1/2 inches and resisted being knocked off.
Jiunn: Burn performance definitely could have used some help. A good quarter of the cigar refused to burn, causing a few major touch-ups. The cigar did provide a cool burning temperature and ample smoke production. 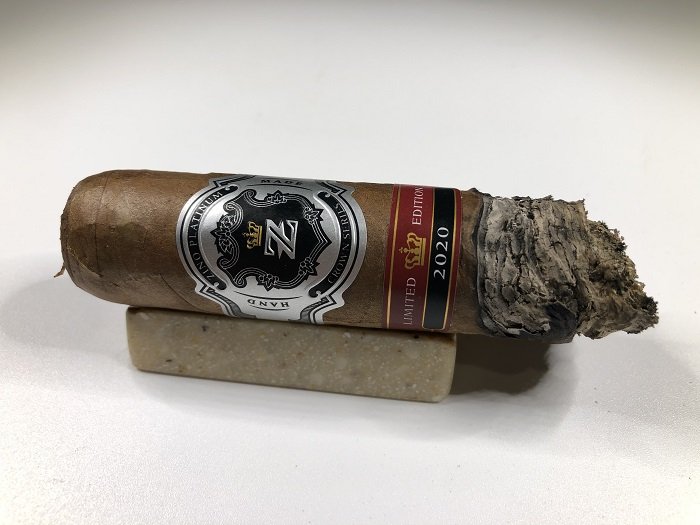 Aaron: The draw was perfect, with just the right amount of resistance that I prefer.
Seth: Very nice draw from beginning to end.
John: The initial draw had a fair amount of resistance to it, roughly 3-1/2 to 4 notches into the resistant spectrum. As the first third progressed, it opened up to 2-1/2 notches into the resistant spectrum, and remained there.
Jiunn: Draw performance was top notch, giving the ideal air flow and resistance.

Aaron: The cigar was pretty average overall as it had a basic profile around toasted cedar, mustiness and dry earth. The dryness was a bit of a detractor and I would have liked to see something else in the profile to try to combat that and give the profile a little pop. The burn issues were also a bit out of the ordinary. I was definitely expecting a more enjoyable experience from the Zino Platinum Crown Series Limited Edition 2020, so that, combined with the very high price point, wouldn’t really lead to me recommending this one or even really revisiting this cigar.
Seth: The Zino Platinum Crown Series Limited Edition 2020 was a nice cigar and another solid Zino release. It is not the best Zino I have smoked, but still a really good cigar. It is better than most, but slightly lacking when you look at Zino overall. The price on this cigar was surprisingly welcome and I would smoke this more often than the limited Davidoff releases based off the price. With that being said, these are not as available as Davidoff releases in some cases. Very nice flavors with good construction. I really liked the body and strength that came with the flavors.
John: The Zino Platinum Crown Series Limited Edition 2020 was overall an average experience, with a good first third that was engaging and interesting, declining with each third. The initial flavors included a tasty medley of baking spices, pepper, mustiness and citrus. The burn was amazing, and the draw had some significant initial resistance, opening up once the first third settled in. Given the overall experience and price of the cigar, I am unlikely to try this one again. Total smoking time was 2 hours and 11 minutes.
Jiunn: A pricey miss for me. The Zino Platinum Crown Series Limited Edition 2020 had exactly the type of profile that I’m not a fan of. With mainly a combination of bitter nuts, stale cedar and burning paper, I found it unenjoyable but nothing off-putting. It needs to really widen the breadth of flavors, adding sweetness, more spices and fruit tones to make it enjoyable. I will pass on this and see what the next iteration brings.