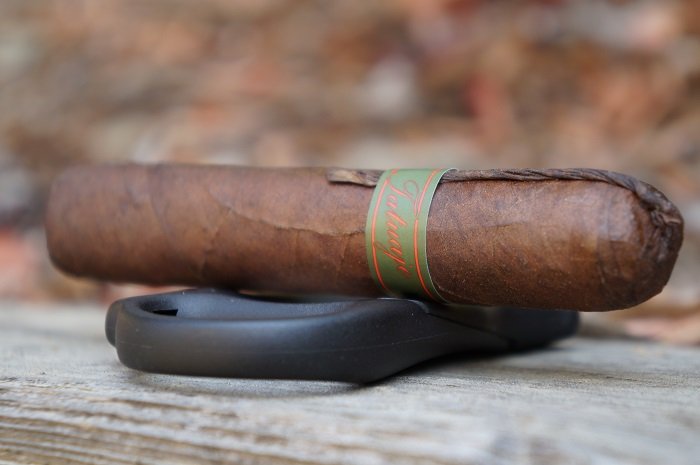 Aaron: The wrapper on the Tatuaje MBS FK is medium brown and has some raised veins present. The seams are easily visible as they are raised a fair amount in some places. The head is finished with a long fuse that tucks underneath the band while the foot is covered with excess wrapper. The band is army green with some red and black text and accents. The aroma from the wrapper is wood along with dry earth while the covered foot brings a sweet wood. The pre-light draw brings a gritty cedar along with a mild spiciness on my lips.
John: The Tatuaje MBS FK has a good number of artisanal complications going on. The cigar is not presented in cellophane, but it has a long string of tobacco coming off the cap and under the band. Additionally it has a closed foot. I was able to pick up on aromas of sweet bread, and at most hay from the foot. 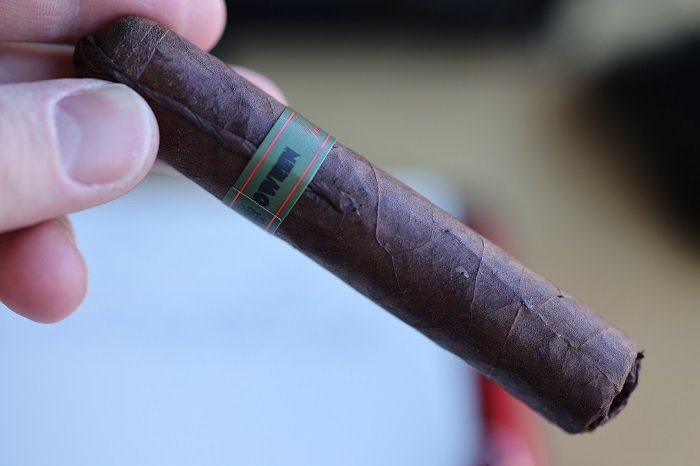 Aaron: The cigar begins with wood and intense freshly ground black pepper. At a half inch in, some mustiness joins the profile as the pepper mellows a bit. The retrohale is musty wood with a black pepper zing that comes sweeping in. As the third comes to a close, the wood and black pepper are even with the mustiness right behind. The strength in this third was slightly above medium.
John: The first third opened with chocolate and pepper. Mild earth and leather joined a few puffs in. The retrohale consisted of sweetness, and lingering pepper sits on my lips and the back of my throat not far into the first third. A dark fruit sweetness finds a home in the middle of the profile. The pepper manages to settle down to a light strength level, and is supplemented by creaminess at roughly the 20 minute mark. 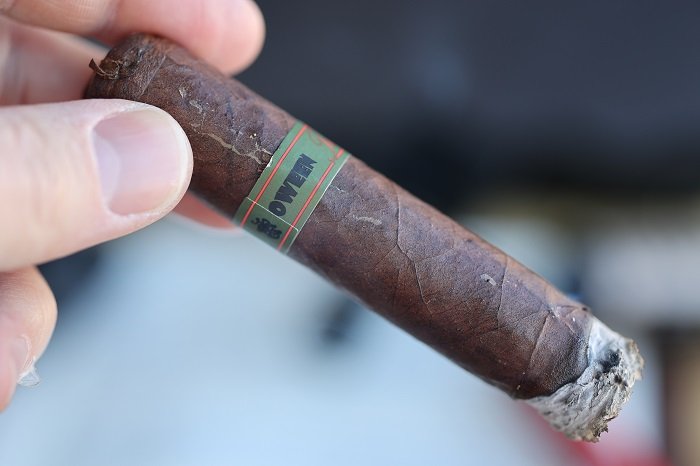 Aaron: As the second third begins, the black pepper lightens up a bit more. At a half inch in, the wood gains a toasted note. The retrohale is musty wood with a lighter black pepper in the background. As the third comes to a close, the toasted note transitions to char while the mustiness is right behind and the black pepper is a little further behind. The strength in this third remained at slightly above medium.
John: The profile moved towards chocolate and cedar in the second third, with light leather providing accents. Dry earth made up the post draw. Creaminess joined the retrohale, with tannins settling into the middle of the profile. As the cigar progressed, post draw earth moved up to medium strength, pushing into the main profile. The earth reduced to light plus by the halfway point. 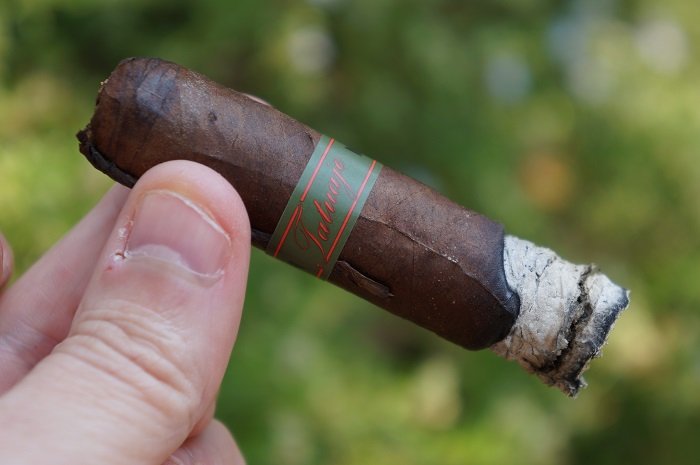 Aaron: As the final third begins, the lightly charred wood and mustiness are up front with the black pepper mellow in the background and some dry earth has joined in. The retrohale is musty and charred wood. The cigar wraps up with the charred and musty wood with black pepper and dry earth in the background. The strength remained at slightly above medium.
John: The last third greeted me with dark earth and wood that settled into the middle of the profile. The earth moved into the post draw, and brought some bitterness with it. Creamy citrus joined the retrohale by the halfway point. 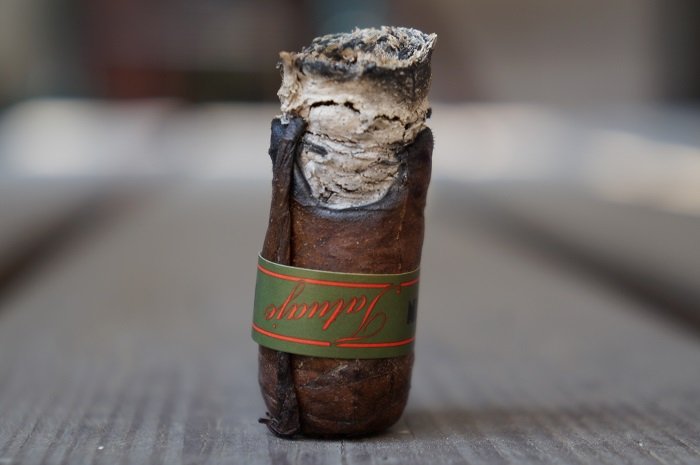 Aaron: The burn was a bit wavy throughout and the cigar went out twice, requiring re-lights. The ash held on in inch and a quarter increments.
John: The burn started out straight, and struggled to stay lit in the second third. The cigar eventually went out in the last third, requiring a re-light. Ash held on well, just under an inch. 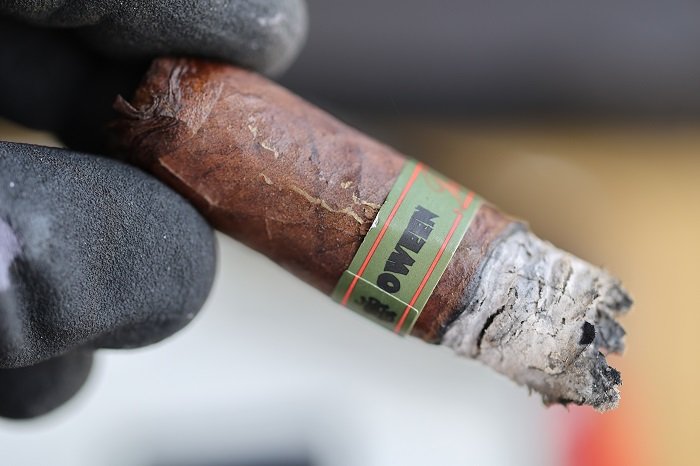 Aaron: The draw was fairly snug, but didn’t seem to cause any issues with the smoking experience.
John: The draw was perfect, right in the ideal zone of resistance between open and snug.

Aaron: The cigar was fairly average throughout as the profile was wood and black pepper dominant with an above average strength level. Knowing that this is a bit of a competitor to the Firecracker series, the strength level makes sense, but the enjoyment level just wasn’t there for me. The Tatuaje MBS FK fits well in the company portfolio and fans of the brand will likely find something they like here, but with the limited nature of the release, there’s not enough here to make me want to track down more.
John: The Tatuaje MBS FK had a just above average flavor profile that delivered for me the best experience through the first third. The format is small and approachable, and provided some interesting complications on the cigar. I might smoke this cigar again if I had the opportunity, but there are a lot of other really great Tatuaje options to choose from. The draw was perfect, and the burn required a re-light in the last third. Total smoking time was 1 hour and 11 minutes.