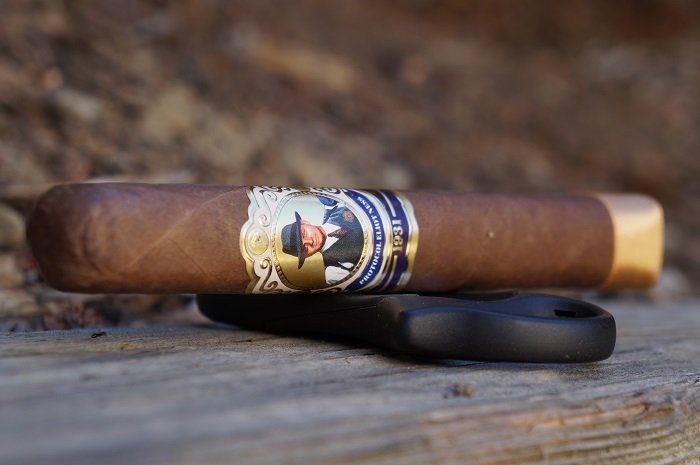 Aaron: The pressed Protocol Eliot Ness Natural has a medium brown wrapper with a few lightly raised veins. The seams are raised in some areas and the caps are decently applied. There are three bands, with the primary being gold, white and blue with a portrait of Eliot Ness and this band sits over the secondary which is burgundy and gold and designates 1931. The foot band is a creamy gold ribbon. The aroma from the wrapper is a mix of cedar and teething cookie while the foot brings sweet cedar and some trailing, nose tingling spice. The pre-light draw is a sweet and musty cedar along with a mild spiciness on my lips.
Seth: Softly pressed, which I enjoy, the Protocol Eliot Ness Natural sports a lovely Colorado wrapper. It has this dark antique wood coloring. The cigar is silky in texture and sports few veins throughout. The cigar is soft in some areas, and I am picking up aromas of rich earth, tobacco, spices and raisins.
John: The Protocol Eliot Ness Natural comes in cellophane but does not have a UPC sticker. The cigar has a primary band and a secondary gold ribbon on the foot. An additional complication on the cigar is that it is square pressed. Aromas from the cigar that stood out were sweet baking spices, mild mustiness, with some faint sweet tobacco underneath. From the foot, I could pick out sweet hay and some wood.
Jiunn: The Protocol Eliot Ness Natural has an even shade of Colorado Maduro. Veins are well pressed, seams tight, bunch and roll on the loose end and head well wrapped. Aromas from the wrapper give cedar and pungent wet barnyard. Aromas from the foot give the same thing but with some added minerals. Cold draw tells nuts and paint thinner. 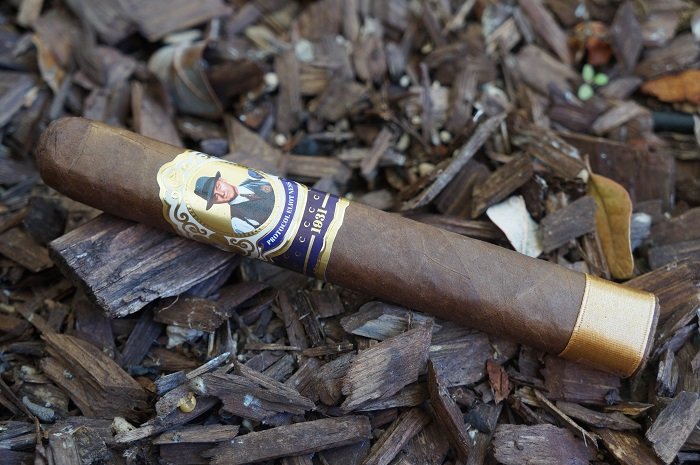 Aaron: The cigar begins with a super detailed toasted cedar along with a baking spice/black pepper mixture that has a lot of pop. At a half inch in, some dry earth joins the profile. At an inch in, a light mustiness joins as the baking spice has relented to the black pepper. The retrohale is toasted cedar, dry earth and light black pepper. At an inch and a half in, the flavors aren’t as full as the cigar started with, but the flavors have melded a bit better as it has mellowed. The strength in this third was slightly below medium.
Seth: The first third opens with strong bitter qualities that are paired with leather and baguette notes. I am picking up some red pepper and earth notes as well, and I would classify the cigar as medium in strength and body. It is quite harsh in the first third.
John: Light wood and baking spices open up the first third. The baking spices moved up to medium-full after only a few puffs. Citrus and cocoa join the retrohale, as the cocoa mixes with the wood through the post draw. As the first third settles in, post draw dry wood takes home, at medium strength with spices accenting. In the bottom half of the first third, citrus intensifies to just under medium strength.
Jiunn: The first third has a dominant red pepper spice that seeps through on all facets. It’s on the mouth draws, and even more so on the retrohale and finish. Fierce on the retro and tongue sticking on the finish, lasting for minutes. Aside from the pepper, there’s baking spices and minerals but no sweetness at all. Strength is medium-full, body is medium. 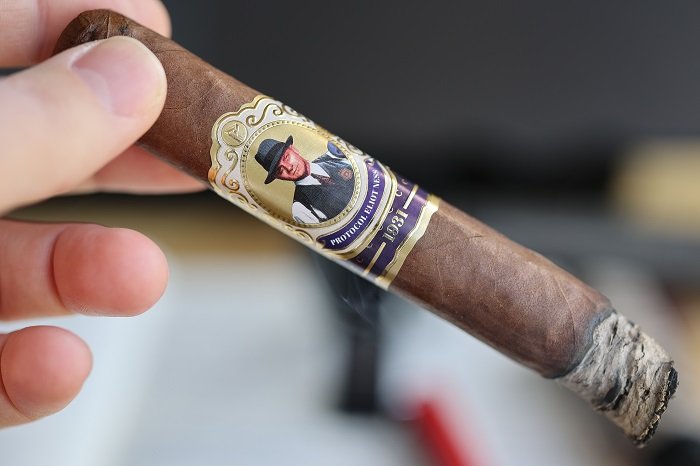 Aaron: As the second third begins, the musty, toasted cedar is slightly ahead of the dry earth while the black pepper is a little further behind. At a half inch in, the dry earth becomes even with the musty, toasted cedar. The retrohale remains toasted cedar, dry earth and light black pepper. At an inch and a quarter, a light leather joins the profile. As the third comes to a close, the musty, toasted cedar and dry earth remain even with light amounts of black pepper and leather in the background. The strength in this third bumped up to medium.
Seth: The second third delivers sharp earth notes with this bitter coffee profile. There are some leather and wood notes present as well, and the finish is that of bread and red pepper. Like before, medium in strength and body.
John: Citrus and wood lead the profile into the second third. The flavors settle into a combination of mild cocoa and wood, with that wood finishing through the post draw. Approaching the halfway point, medium baking spices, citrus and wood define the center of the profile.
Jiunn: The second third picks up a dryness on the finish. Also, starting to get leather to the existing red pepper spice, baking spices and minerals. Strength and body stays consistent at medium plus and medium. 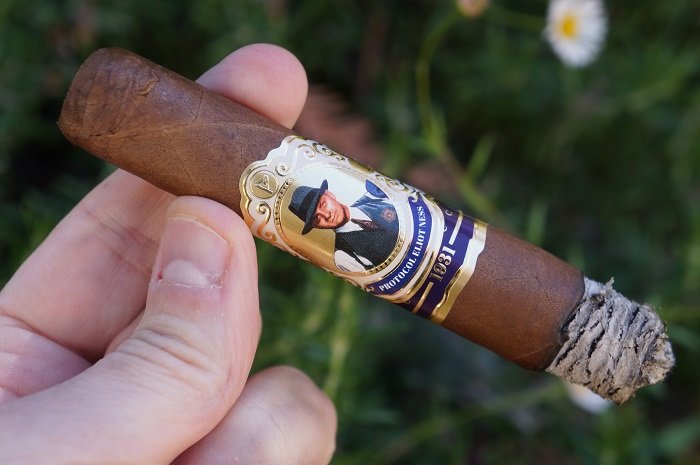 Aaron: As the final third begins, the overall profile is fairly dry. At a half inch in, the black pepper and leather have departed. The retrohale is musty, toasted cedar and dry earth. At an inch in, the toast becomes pretty heavy and a light bitterness joins the profile. The cigar wraps up with the even mix of musty, toasted cedar and dry earth with a light bitterness in the background. The strength in this third remained at medium.
Seth: The final third delivered a profile that was an improvement from the second third, but still lacking. It had notes of coffee, leather, earth and wood. Like before, medium in strength and body.
John: Wood and baking spices greet me in the last third, with a tannic wood finish into the post draw. As the last third settles in, medium strength cocoa comes into the retrohale. As the last third progresses, a medium strength earth finishes each draw.
Jiunn: The final thirds general feel is the same as the second third. But the profile is becoming a bit sharper/rough around the edges with the same flavors of red pepper, baking spices and dry leather. Strength and body finishes the same medium plus and medium. 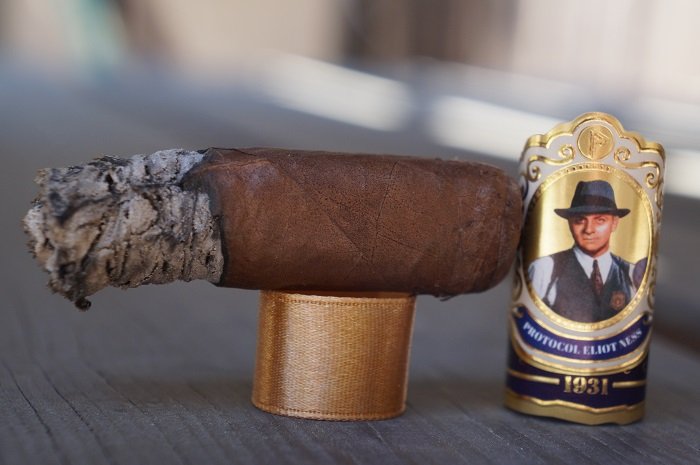 Aaron: The burn was a bit wavy at times, but always maintained itself. The ash held on in inch and a quarter increments.
Seth: Burn was nice throughout.
John: Two cigars were smoked for review. The first cigar was slightly uneven in the first third, eventually going out which required a re-light. Some minor tunneling occured in the last third, eventually going out, requiring a re-light. The second cigar was perfect through the review with no burn issues and no attention required. The average between these two scores is a good rating for burn.
Jiunn: What type of burn do I expect out of an AJ factory? Perfect burn. What did I get? A perfect burn. 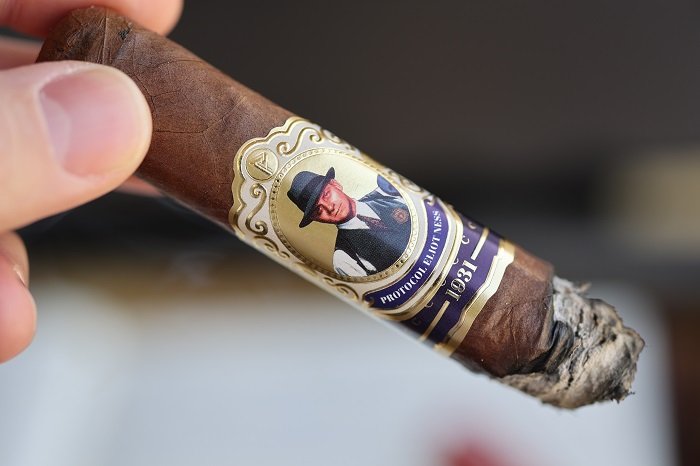 Aaron: The draw was perfect, with just the right amount of resistance that I prefer.
Seth: Solid draw throughout. A little loose for my liking, but still solid.
John: Two cigars were smoked for review. The first cigar was 2 to 2-1/2 notches into the open spectrum. The second cigar was 1/2 to 1 notch into the resistant spectrum. The average between these two draw scores was very good.
Jiunn: What type of draw do I expect out of an AJ factory? Perfect draw. What did I get? A perfect draw.

Aaron: It’s been a while since I’ve experienced a cigar that delivered the fullness of flavors that this one did through the first third, and it was welcome. Unfortunately, the cigar ran out of steam at about the halfway point and the overall dryness of the profile was a bit of a detriment. I do prefer the Protocol Eliot Ness Natural over the Sir Robert Peel Natural, so that was nice to see for the Lawmen Series. I probably don’t see myself coming back to this all that often, but I am looking forward to seeing how the Maduro version performs.
Seth: Do you remember that scene in The Untouchables when Costner thinks he is pulling a bottle of fine Canadian whiskey out of the crate, but it is a handle for a silk umbrella? His facial expression when the photographer took the photo was right in line with my facial expression when I first lit the Protocol Eliot Ness Natural. Very rough start with strong bitter notes. While that bitter note faded, the flavor profile just never took off and the sharp earth notes were rather unpleasant. The cigar improved in the final third, but it still was not stellar, and it was not worth smoking the first two thirds. I am going to have to go with Capone on this one.
John: The Protocol Eliot Ness Natural was overall a good cigar, with intense baking spices at times accented with cocoa and citrus components. Construction suffered in the first cigar with re-lights and a bit of an open draw, while the second cigar was flawless in both categories. I would smoke this cigar again, although I am very interested to see how the Maduro release stacks up against the Natural. Total smoking time was 2 hours and 7 minutes on the first cigar, and 1 hour and 29 minutes on the second cigar.
Jiunn: The Protocol Eliot Ness Natural is the third lawmen series cigar I smoked (first two being Sir Robert Peel Natural and Maduro), and thus far, it’s not living up to what I know the Cubariqueño Cigar Co. guys can do. The overall vibe of these Lawmen Series is sharpness, unstructured and unbalanced. I’ll have to look forward to the Maduro version of Eliot Ness and pass on this Natural version.