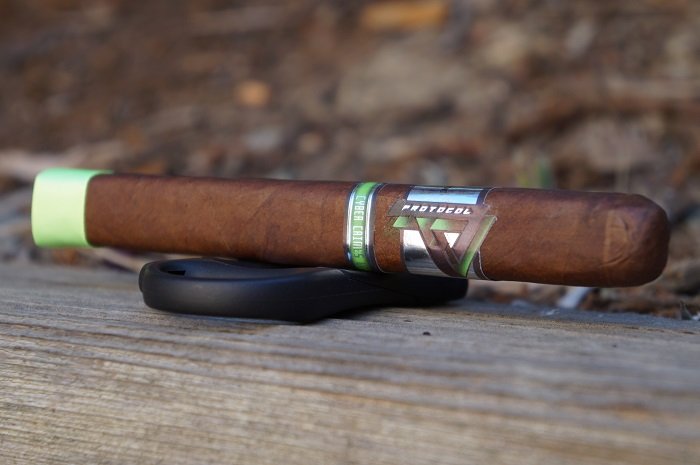 Aaron: The Protocol Cyber Crimes Unit has a rectangle press with a wrapper that is medium brown with some lightly raised veins running down the back of the cigar. The seams are very smooth and hard to detect while the caps are well applied. There are three bands, with the primary being the traditional design for the core lines and carrying a green, black and chrome color combination for this line. The secondary band has the same color combination and denotes the line while the foot band is a pale neon green ribbon. The aroma from the wrapper is a mix of wood, hay and earth while the foot brings wood and tobacco sweetness. The pre-light draw is musty and slightly sweet cedar along with a mild spiciness on my lips.
Seth: Nicely pressed, the Protocol Cyber Crimes Unit sports a milk chocolate colored wrapper. There are some veins present throughout, but they are small to medium in size. It has a dark Colorado-Maduro/Maduro wrapper, and I am picking up aromas of tobacco, earth, spices and mineral notes. It is silky and oily in texture. The wrapper was dark on one and lighter on another.
John: The Protocol Cyber Crimes Unit from Cubariqueno comes with the same consistent packaging theme as the other core releases. The cigar is cellophaned, and the color scheme is an 80’s style DayGlo green secondary band, along with a green foot band ribbon. The cigar is box pressed as well. For aromas, I could pick up on barnyard and sweet wood. From the foot, I picked up quite a bit more, which is unusual, with scents of chocolate, molasses, hay and wood.
Jiunn: The Protocol Cyber Crimes Unit has a Colorado maduro wrapper shade. Veins are neatly pressed, seams tight, bunch and roll even and head well wrapped. Aromas from the wrapper give chocolate and barnyard stank. Aromas from the foot tell of sweet chocolate and white pepper. Cold draw gives semi-sweet chocolate and hay. 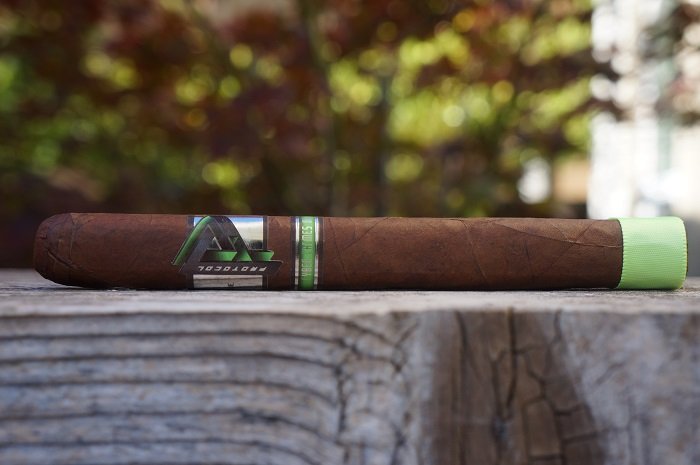 Aaron: The cigar begins with lightly musty and toasted cedar along with a good dose of black pepper. At three quarters of an inch in, a light earthiness joins the profile. The retrohale carries the same profile but dials back the black pepper. At an inch and a quarter, the mustiness has picked up a bit. As the third comes to a close, the musty, toasted cedar is up front with the black pepper and earth even in the background. The strength in this third was right at medium.
Seth: The first third opens with some earth, mineral and spice notes. There are some pepper qualities present as well, and the finish is that of cocoa powder. I would classify the cigar as medium in strength and body.
John: The first third opens with sharp pepper, wood, chocolate and a wood finish. The pepper is an aggressive white pepper as I continued to puff. A lovely cocoa comes through on the retrohale, but is being run over by the aforementioned pepper. Some cherry sweetness comes through as the first third progressed. Both cigars I smoked were consistent through the first third with their flavor profiles.
Jiunn: The first third delivers a punchy experience. It is medium-full in strength (medium body), with a rustic flavor profile centered around intense white pepper spice and minerals backed by over-roasted nuts. On the retrohale, fierce white pepper spice. The finish is long and lingering with cedar and minerals. 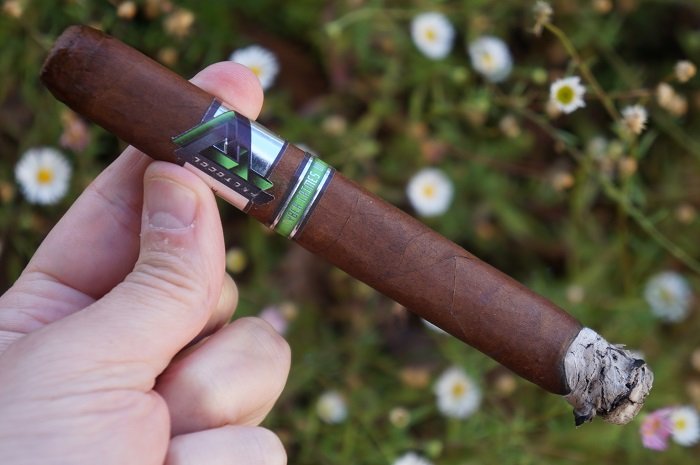 Aaron: As the second third begins, the gap between the musty, toasted cedar and even mix of earth and black pepper increases. The retrohale is musty, toasted cedar and dry earth. The cigar maintained the same profile throughout the third and finishes with the musty, toasted cedar up front and even mix of earth and black pepper in the background. The strength remained at medium.
Seth: The second third delivers a profile that is right in line with that of the first. I am picking up some mineral, pepper and spice notes, and there is a finish of earth and cocoa powder. Hint of coconut, but just a hint. In terms of strength and body, just above medium.
John: The pepper falls in intensity, allowing a layered chocolate and mildly musty wood to take the lead. Wood establishes in the post draw again. That cocoa continues to build in intensity as the cigar progressed through the middle third.
Jiunn: The second third calms down a slight bit in terms of rawness and punch of flavors. But the profile does get stronger, almost reaching full. The flavors are still pretty consistent with intense white pepper spice, minerals and over roasted dried nuts. 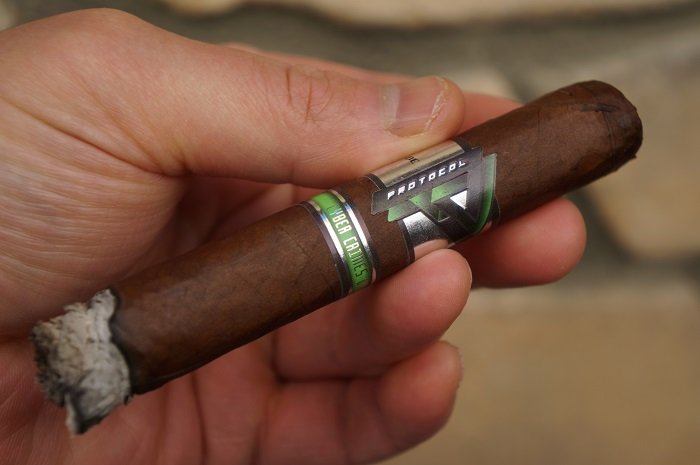 Aaron: The final third begins with the dry earth picking up a bit and the black pepper being very mild. The retrohale remains musty, toasted wood and dry earth. As the cigar wraps up, the toast becomes pretty heavy with the dry earth right behind and the black pepper mild in the background. The strength in this third bumped up to slightly above medium.
Seth: The final third is right in line with the second. I was picking up mineral and earth notes that were paired with pepper and spices. Bits of cocoa and earth on the finish. Like before, just above medium in strength and body.
John: Cocoa mixes with baking spices as a medium strength wood finishes the draw. Some bitter earth and cedar lead the profile in the bottom half.
Jiunn: The final third is actually really subdued. I’m mainly getting a slight semi-sweet chocolate note with minimal minerals. Strength is still medium-full (and same medium body). 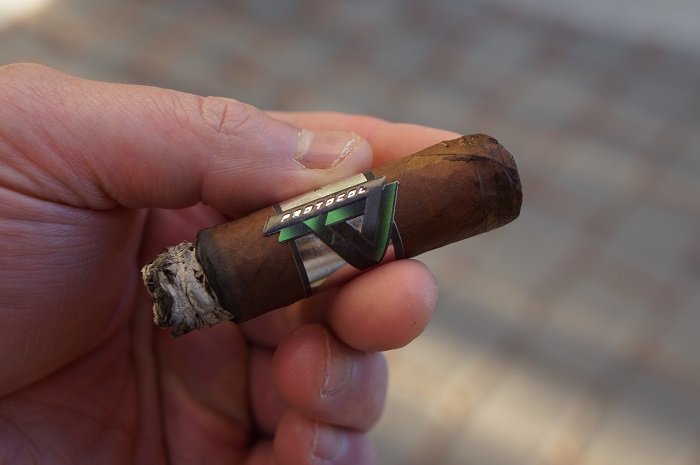 Aaron: The burn was a bit wavy and needed a couple of touch-ups to keep things burning in unison. The cigar also went out twice, requiring re-lights,
Seth: Had to touch up the cigar a couple times, but no real problems.
John: Both cigars smoked seemed to have some burn issues. The first cigar was offset in the first third, going out which required a re-light. The cigar went out again at the halfway point, requiring another re-light. The second cigar went out at the exact same place as the first cigar, requiring a re-light. From there, a touch-up was required in the second third as the burn became offset. No other intervention was required.
Jiunn: Based on two cigars I smoked, both had burn issues. One was definitely worse than the other, with tunneling issues, and two re-lights. The other mainly had issues with uneven burn, requiring a few touch-ups. 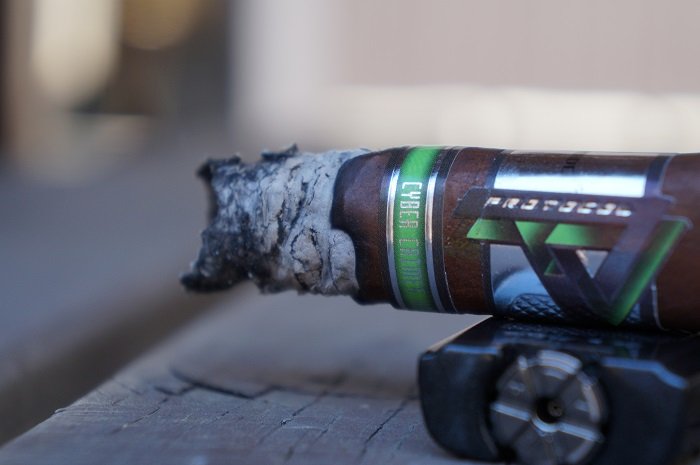 Aaron: The draw was perfect, with just the right amount of resistance that I prefer.
Seth: Nice draw from beginning to end.
John: Both cigars performed the same on the draw, roughly 1-1/2 to 2 notches into the resistant spectrum.
Jiunn: The draw on both samples was great. The right amount of air flow and resistance.

Aaron: The cigar started well and took me back to how well the brands core lines perform, but unfortunately from the second third on, the profile was average as it maintained a mix of musty, toasted wood, dry earth and black pepper. The burn issues continue to be a factor for the brands releases out of La Zona. The Protocol Cyber Crimes Unit is probably my least favorite of the core lines, but still performs at a decent level. If you’re a fan of the brand, give this a try to see how it stacks up for you.
Seth: I believe the Russians would claim this Cyber Crimes Unit an improvement compared with that of Colonial Pipeline, but overall an average cigar. It had a nice core profile, but that was about it. With that, I do not believe it was a strong enough core to deliver “good” traits in either third. The core flavors lacked that “good” quality. The samples I smoked were very inconsistent as well. This review may come out being higher than the actual average of the two, but still the Protocol Cyber Crimes Unit needed more to have a better experience regardless.
John: The Protocol Cyber Crimes Unit performed fairly well, with aggressive white pepper in the first third, and a more nuanced chocolate forward flavor in the second third. I wasn’t quite sure what to make of the profile, and in the end it seemed as if there was a teleport chamber, and the Protocol Red and Blue stepped in at the same time and came out the other side as a chimera. The draw was consistently very good on both, with re-lights and some burn issues on both as well. I would smoke the Cyber Crimes Unit again. I failed to record the smoking time on the second cigar smoked, however the first cigar had a smoking time of 1 hour and 42 minutes.
Jiunn: If you’re paying attention to my ratings of the first, second and last third, you should be wondering why I’m giving the overall experience a “good” rating. Reason being, I smoked two cigars for review and both came out drastically different. The first one I smoked represented the flavors I denoted within the first, second and last third of this write up. ie overall raw, punchy, harsh. The second one I smoked had way less punch and mineral, and was actually quite nice with a lot of chocolate undertones. So, lets just chop it in half(ish) and call the overall “good.”