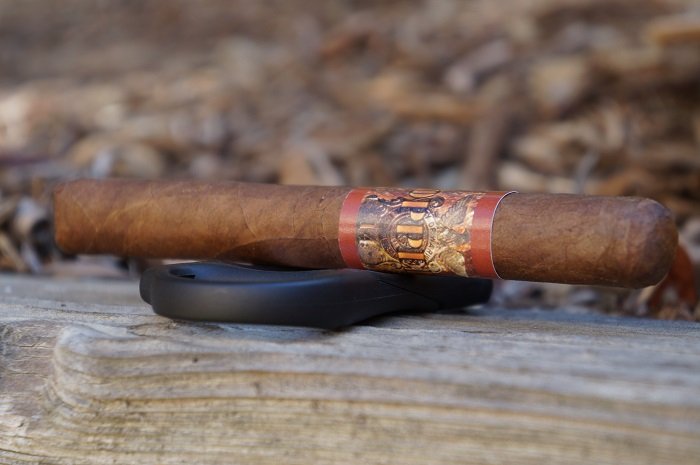 Aaron: The wrapper on the Protocol Coppers is a marbled medium brown and has a few decently raised veins present. The seams are smooth and the caps are very well applied. The band has the line name and a badge from the area where the cigar is a store exclusive. The aroma from the wrapper is subtle and brings slightly sweet wood while the foot brings a mix of musty wood and wheat bread. The pre-light draw brings musty cedar and a faint note of anise. There is also a mild spiciness on my lips.
Seth: You take off this band and you have a beautiful cigar. The Protocol Coppers is finished with a lovely triple cap and the cigar sports a wrapper that has a lovely Colorado coloring. Great red clay colored wrapper. The cigar is firm throughout, small sized veins and oily in texture. Aromas of tobacco, hazelnuts, rich earth and spices.
John: The Protocol Coppers comes in cellophane and does not have a UPC sticker or code. I find the copper ‘Coppers’ on the band difficult to make out against the background. For aromas, I was able to pick up on spices, cedar and light bread notes. From the foot, there was sweet tobacco and hay. 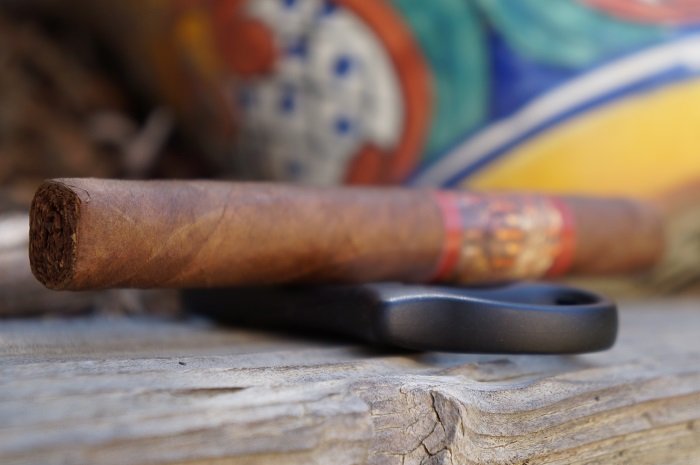 Aaron: The cigar begins with an even mix of lightly musty cedar and baking spice. At a half inch in, the mustiness becomes a bit fuller. At three quarters of an inch in, some creaminess joins the profile. The retrohale is an even mix of musty cedar and baking spice. At an inch in, the flavor profile is quite full as the musty, creamy cedar is quite chewy and the baking spice is pretty potent. The strength in this third was slightly above medium.
Seth: The first third starts out with some strong black pepper notes that are paired with oak, citrus, coffee and earth qualities. It is very filling and there is a nice bit of balance between the flavors, strength and body. I would classify the cigar as medium-full in strength and body.
John: The first third starts with medium baking spices, wood and chocolate that carries through the retrohale. There is sweetness between each draw. On the post draw, wood and chocolate develops. The profile doesn’t undergo any other changes during the rest of the first third. 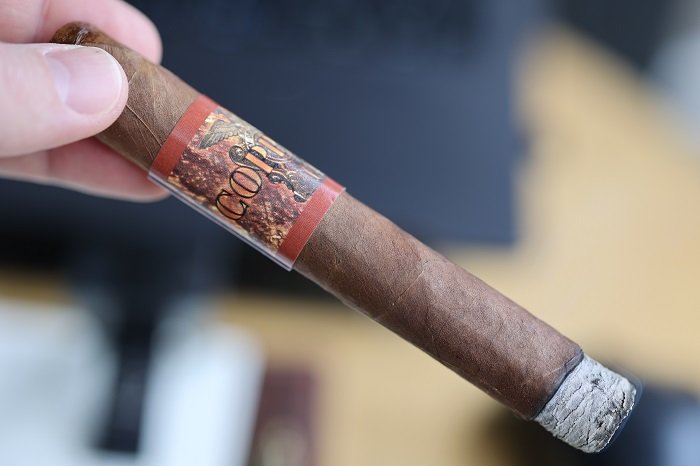 Aaron: As the second third begins, the baking spice mellows and drops a bit behind the musty, creamy cedar. At a half inch in, the creaminess drops from the profile. The retrohale is musty cedar with baking spice right behind. As the third comes to a close, some dry earth joins the profile, about even with the baking spice while the musty cedar remains up front. The strength remained at slightly above medium.
Seth: The second third delivered a flavor profile of pepper spices, citrus peel and hay qualities. I picked up some barnyard notes as well which were delivering earth and wood qualities. In terms of strength and body, i would still consider this cigar medium-full.
John: The second third is chocolate forward, with some earth in the middle. Each puff finishes with wood and earth that lingers into the post draw, along with some dryness. As the second third progresses, dry cedar takes home in the middle of the profile. 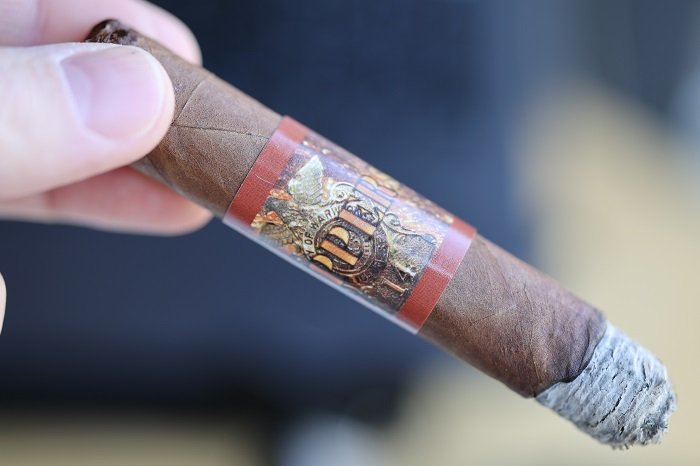 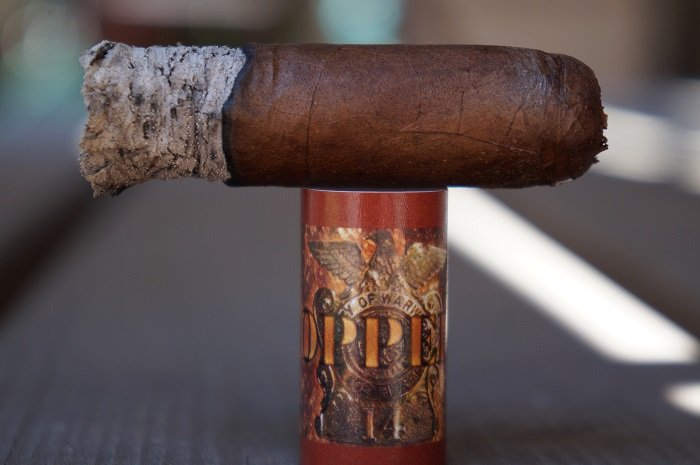 Aaron: The burn line was straight throughout, but the cigar did go out twice, requiring re-lights.
Seth: Solid burn from start to finish.
John: I smoked two cigars for review. Both cigars had a straight burn, and a bright white ash. The first cigar went out spontaneously at the halfway point, requiring a re-light. The second cigar had no burn interventions. 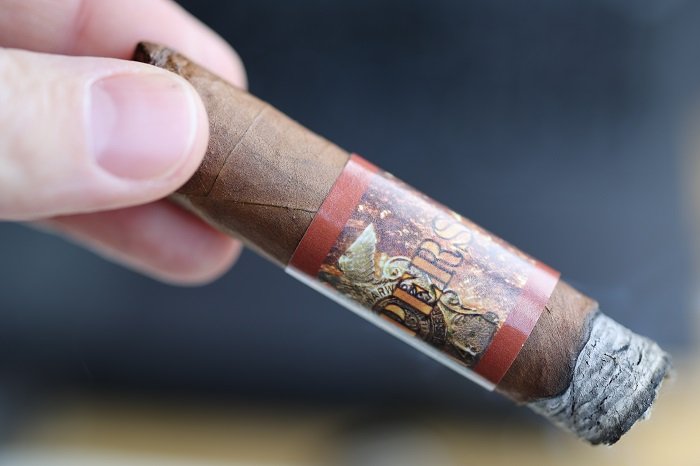 Aaron: The draw was perfect, with just the right amount of resistance that I prefer.
Seth: Nice draw throughout.
John: I smoked two cigars for review. The first cigar had some resistance to the draw, roughly 2-1/2 to 3 notches. The second cigar was right in the ideal zone of resistant and open.

Aaron: The cigar started with a lot of body and a full flavor profile, but unfortunately, it let off the gas going into the second third and remained that way the rest of the cigar. While the Protocol Coppers isn’t bad, it just couldn’t maintain what was delivered in the first third. I think this is a slightly better offering than most of the other special/single store releases from the brand and I might come back to it from time to time, but it isn’t something that I see myself going back to all that regularly. It’s worth trying one to see what you think.
Seth: The Protocol Coppers was not a bad cigar. I liked the flavor profile, strength and body. It’s a cigar I would smoke at any time. However, I am not a fan of the price and the packaging. There was a heavy pepper spice that I enjoyed with the cigar, and they did a good job of balancing everything out. Would be curious to smoke a similar blend in a different vitola.
John: The Protocol Coppers had its best foot forward in the first third, offering some complexity and engagement. The second and last third were like a forty degree day, so I didn’t come away with much of an impression. As far as exclusives go, it’s not a bad offering, but I would be hard pressed to choose it over the strong offerings of the Official Misconduct, Probable Cause or Themis. The first cigar reviewed struggled somewhat in the draw and burn category, with the second cigar having no issues. Total smoking time averaged 1 hour and 47 minutes.