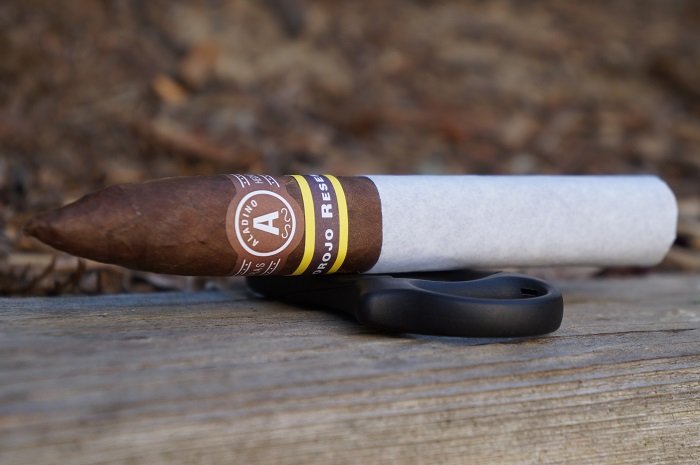 Aaron: The wrapper on the JRE Aladino Corojo Reserva Figurado is medium brown, but has a turtle shell effect as the network of veins carries a light color around them. The seams are a bit raised while the tapered head is very well finished. There are two bands that are the traditional design for this line and just under the second band is a tissue sleeve that covers the rest of the cigar. The aroma from the wrapper is a light mix of musty and sweet cedar while the foot brings the sweet cedar aroma of opening a brand new humidor. The pre-light draw brings a musty and stale cedar along with a mild spiciness on my lips.
Seth: This is a massive figurado. It is firmly pressed and silky in texture with medium sized veins present in visibility and texture. Dark Colorado wrapper, Colorado Maduro in some areas, the wrapper has a nice marbling to it. Sharply tapered, the JRE Aladino Corojo Reserva Figurado has aromas of rich earth, spices and herbal qualities.
John: The JRE Aladino Corojo Reserva Figurado has a lot going on for the pre-light experience. The cigar is double banded, with a tissue paper that covers roughly two-thirds of the wrapper. On the back of the paper is a UPC code. In addition, there is a soft box press complication. Aromas off the wrapper included cereal and fresh cut wood. From the foot, light hay and wood.
Jiunn: The JRE Aladino Corojo Reserva Figurado has a Colorado claro wrapper shade. Veins are well pressed, seams tight, bunch and roll firm and even and Torpedo style head is well wrapped. Wrapper aroma gives wet barnyard and pungent white pepper. Foot aromas gives strong doses of white pepper. Cold draw has that same powerful white pepper with added herbal tea. 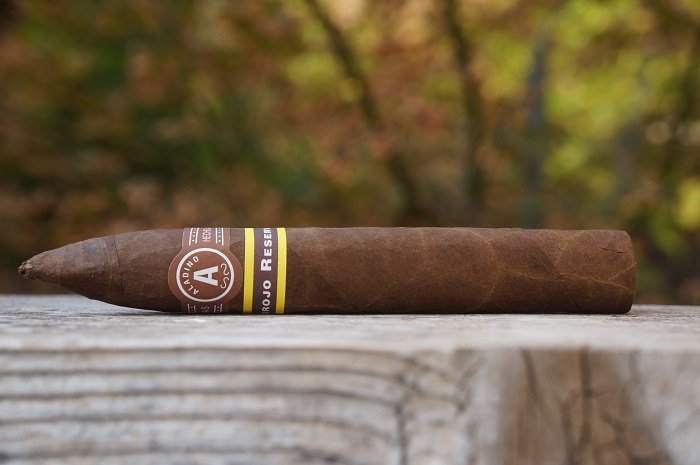 Aaron: The cigar begins with musty cedar and baking spice. At a quarter inch in, some dry earth joins the profile. At a half inch in, a faint creaminess becomes present. The retrohale is musty cedar, dry earth and a very mild black pepper. At an inch in, the faint creaminess departs and is replaced by a light chalkiness. At an inch and a half in, the profile gains a meatiness to it to go along with the musty cedar, dry earth, light baking spice and chalkiness. The strength in this third was slightly below medium.
Seth: The first third begins with herbal spices. There is this red pepper and rosemary quality. I am picking up cedar notes as well, and the finish is that of leather, coffee and earth. I would classify the cigar as medium-full to full in strength and body.
John: The first third opens with dry, musty wood, baking spices, with a combined sweetness and spices into the post draw. Creamy, musty wood makes up the retrohale, with a citrus finish. There’s some sort of background pepper lingering on the palate after each draw. Some cocoa joins the retrohale as the cigar settles in. As the first third progresses, dry wood moves into the middle of the profile and carries into the post draw.
Jiunn: The first third has dominant tinny and slick white pepper spice. Along with this note comes faint tart cherries. Retrohaling gives more of the white pepper and tart cherries along with subtle maple syrup sweetness. The finish is soft and lingering with the same tinny white pepper spice. Strength is medium-full and body is medium. 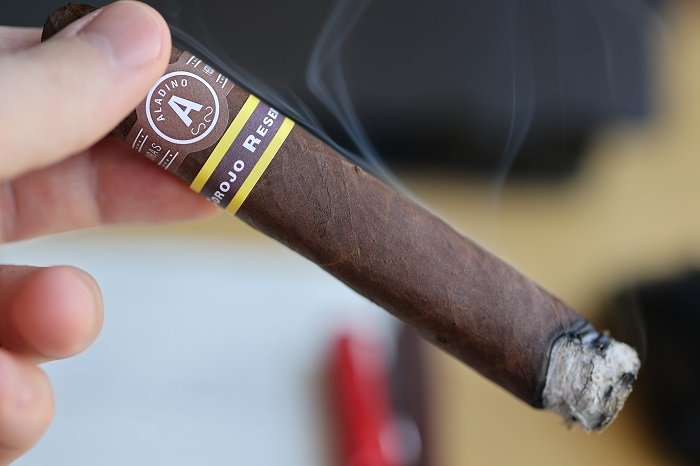 Aaron: The second third begins with the musty cedar and dry earth even while the baking spice, chalkiness and meatiness are in the background. At a half inch in, the meatiness has departed. The retrohale remains musty cedar, dry earth and a very mild black pepper. At an inch and a quarter, the baking spice and chalkiness depart and a barbecue smokiness joins in. As the third comes to a close, the profile is musty cedar and dry earth up front with the barbecue smokiness in the background. The strength in this third bumped up to medium.
Seth: The second third delivers similar qualities to that of the first third and I am getting this herbal and cream cedar profile. There are some earthy qualities present, but they are dryer, and I am picking up some roasted nut and pepper spice qualities as well. It is smoking at a medium level in this third for strength and body.
John: On the first few puffs, creamy wood and muted mustiness get things going, as the wood carries into the post draw. The profile is largely unchanged through the second third, with an overall lighter intensity than the first third.
Jiunn: The second third’s flavor profile complexities and enjoyment decreases. It’s pretty mundane with just a lasting slick white pepper spice. Strength and body is still medium-full and medium, respectively. 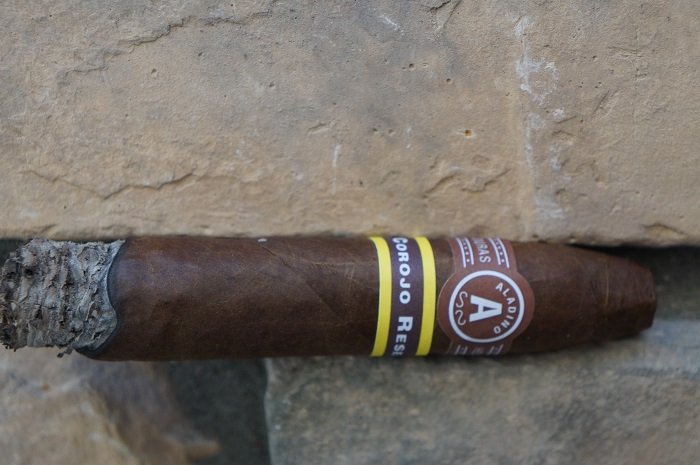 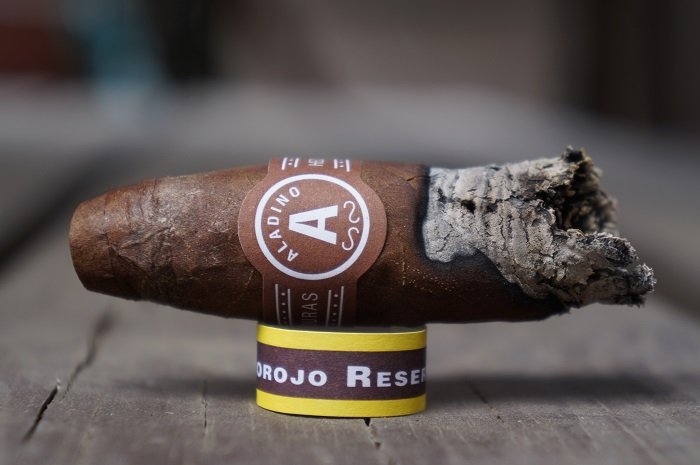 Aaron: The burn was a bit wavy throughout and there were a couple of times where the smoke production became very low and I brought the lighter out to get things going again.
Seth: Great burn throughout.
John: The burn is slow and straight in the first third. The burn is uneven in the second, self-correcting. The burn is uneven again in the third, requiring a touch-up. At times, the cigar felt like it struggled to stay lit in the last third, but I was smoking quite slowly. The ash had some flakiness to it throughout the review.
Jiunn: Burn performance was nearly perfect. Just a couple quick touch-ups required due to an uneven burn throughout the entire smoking experience. 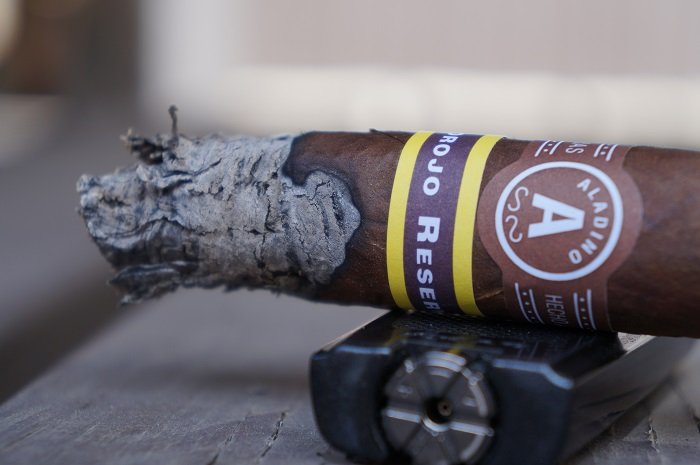 Aaron: The draw was a bit tight through the first third, but a second cut of the tapered head brought it to the right amount of resistance that I prefer.
Seth: Perfect draw.
John: The draw had some resistance to it, roughly 2-1/2 to 3 notches into the resistant spectrum.
Jiunn: The draw was perfect, giving the ideal air flow.

Aaron: The cigar started well as it was doing some transitioning, but by the time I got to the second third, the profile became a bit mundane. I know a fair number of people really like this line, but it has never really hit for me and this JRE Aladino Corojo Reserva Figurado stayed in line with my previous experiences. It’s just not a cigar I’d come back to, and with the high price point, there’s just another detractor for me.
Seth: I really enjoyed the JRE Aladino Corojo Reserva Figurado. It is a great blend that produces lovely flavors from beginning to end. Wonderful balance and nice strength and body. With that being said, I hate the vitola. There are four vitolas in the lines, and the two vitolas I would typically go for do not perform as well as the other two. This is a blend that does significantly better with a large ring gauge. For those of you who hate large ring gauges, you will not mind the larger ring gauge with the Toro or the Figurado. It is a line, that when it’s in the right vitola, produces an amazing Honduran puro.
John: The JRE Aladino Corojo Reserva Figurado was overall an average flavor experience, with some interesting complexity coming through in the first third. The burn required a single touch-up in the last third, with some resistance to the draw. Having smoked a number of Aladino Corojo Reservas, I didn’t feel like this vitola was the ideal representation for the blend. I’d be inclined to smoke this is another vitola offering. Total smoking time was 2 hours and 13 minutes.
Jiunn: Boring and monotonous is how I would categorize the overall experience of the JRE Aladino Corojo Reserva Figurado. In general, there’s way too much of the tinny and slick white pepper spice note. This is by far my least favorite vitola in the lineup. My recommendation is to smoke the more traditional sizes of this series.