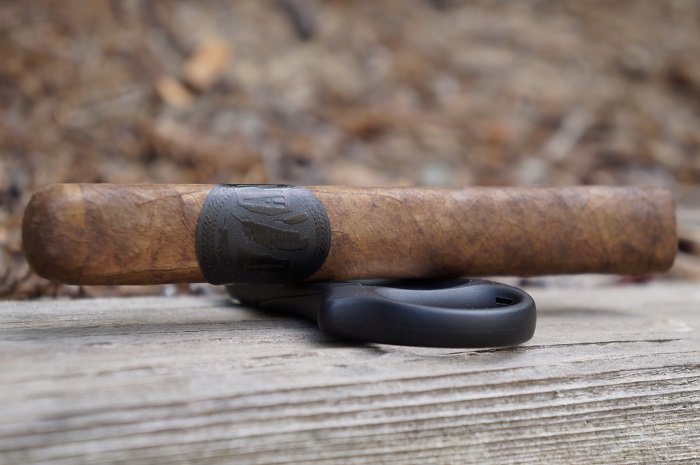 Aaron: The wrapper on the Crowned Heads The Lost Angel TAA 2021 has a lot of color variation and goes from light brown to dark brown and there is a network of lightly raised veins. The seams are fairly smooth and the caps are very well applied. The band is black on black and has the line name across the front and the company logo on the back. The aroma from the wrapper is a lightly smoky wood and earth while the foot brings a sweet bread, almost pastry like note. The pre-light draw brings a mix of musty wood and sweet bread.
Seth: The Crowned Heads The Lost Angel TAA 2021 has a beautiful light brown wrapper that is near Natural in coloring. There are small veins throughout and tooth present as well. Lots of tooth. Silky and firm throughout, well-constructed cigar. Beautiful cap. Aroma of cherries, pipe tobacco, rich earth, sweet spices and cocoa on the foot with notes of mesquite barbecue and barnyard on the wrapper.
John: The Crowned Heads The Lost Angel TAA 2021 comes in cellophane, with a UPC sticker attached to the cellophane. Additional complications include a box press to the cigar. I was able to pick out aromas of bread, sweet and mild barnyard and a generic sweetness, all from the wrapper. Out of the foot, there was sweet tobacco and wood.
Jiunn: The Crowned Heads The Lost Angel TAA 2021 has a Colorado maduro wrapper shade, providing a leather textured consistency. Veins are well pressed, seams tight, bunch and roll even and head well wrapped. Aromas from the wrapper tell barnyard and milk chocolate. Aromas from the foot gives more barnyard and fermented vegetables. Cold draw gives cedar and black tea. 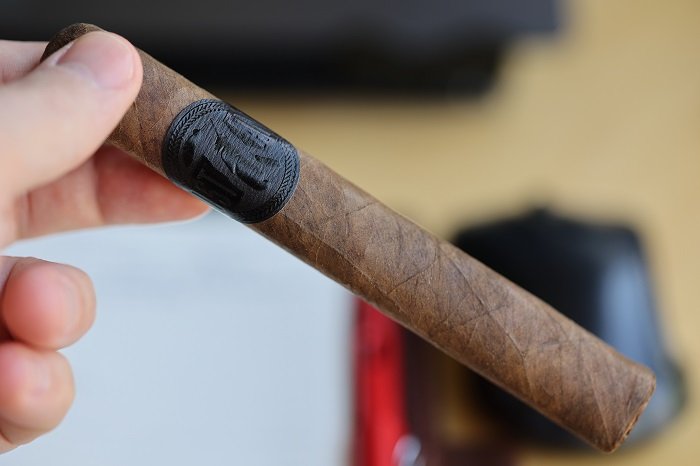 Aaron: The cigar begins with musty, lightly toasted wood and baking spice. At a quarter inch in, some dry earth joins the profile. At an inch in, there’s a bit of smoky wood on the finish. The retrohale is musty, lightly toasted wood and earth. As the third comes to a close, the profile is musty, toasted and smoky wood, dry earth and baking spice. The strength in this third was slightly below medium.
Seth: The first third starts off by delivering musty cedar and barnyard notes. There are herbal qualities present as well, and I am picking up flavors of earth, cocoa, black pepper and cinnamon. I am picking up some leather on the finish, and there are some additional red pepper notes. I would classify the cigar as medium to medium-full in strength and body.
John: The first few puffs I tasted sweet wood, light-plus strength baking spices, with bread and baking spices on the retrohale. Some light mustiness finished the draw and carried into the post draw. At the midway point, the profile settles into a sweet, musty baking spice and wood combination. The profile is fairly medium strength through the first third.
Jiunn: The first third’s main flavors center around dry cocoa and minor baking spices. On the retrohale, spice shows up in the form of a raw spicy cedar as well as black tea. Finish is medium in length with the same dry cocoa and baking spices. Strength and body is medium. 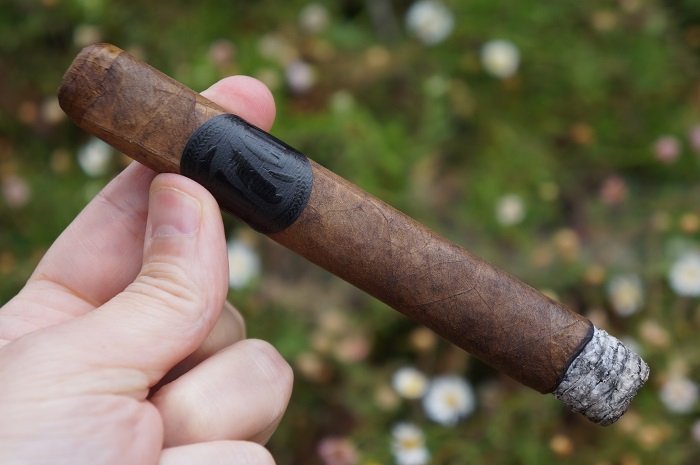 Aaron: The second third continues with the musty, toasted and smoky wood, dry earth and baking spice. The profile is slightly dry overall. The retrohale is a slightly mellower version of what I get from the mouth draws. At an inch and a quarter, the baking spice transitions to a light, dull black pepper. As the third comes to a close, the profile is musty, toasted and smoky wood, dry earth and light, dull black pepper. The overall profile is a bit more dry now. The strength in this third bumped up to medium.
Seth: The second third delivers a profile that has not shifted away too far from the first third. I am picking up those barnyard and cedar notes, and they are pairing with the earth and cocoa notes from before. There is this floral quality that has taken the place of the herbal notes from before, and the pepper spice notes have faded, but still present. I would classify this third as being medium in strength and body. Very approachable.
John: The second third has musty baking spices and wood leading into the second third, with a musty and wood combination in the post draw. Sweet wood takes up the middle of the profile as it progresses. Some lingering nuttiness adds to the complexity by the halfway point.
Jiunn: Within the beginning of the second third, there’s a greater sense of dryness, which seeps into the finish the most. The overall vibe is still the same though, with dry cocoa and cedar. Strength and body remains medium. 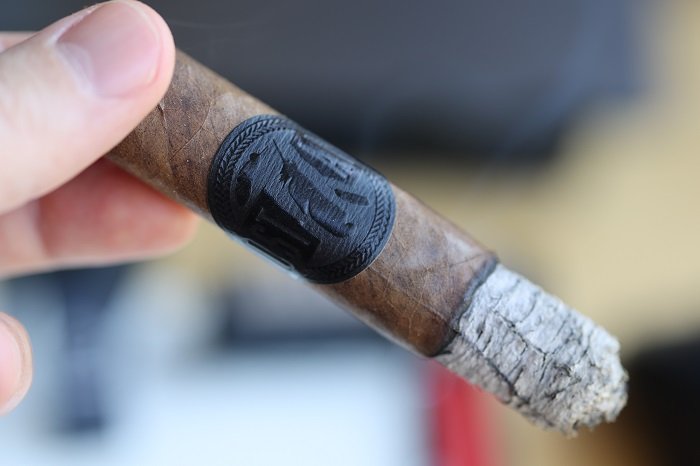 Aaron: As the final third begins, the smokiness picks up. At a quarter inch in, the toast level becomes fairly heavy. The retrohale is musty, toasted wood and dry earth. As the cigar comes to a close, the musty, heavily toasted and pretty smoky wood has the lead with the dry earth and dull black pepper a bit behind. The strength in this third remained at medium.
Seth: The final third delivered a profile of cocoa powder, cedar, earth, cinnamon, black and red pepper. The floral qualities remained, and some herbal aspects returned as well. There was this soft nuttiness present also, almost almond like, but it was subtle. Like before, medium in strength and body.
John: Dry, lingering wood to the draw that carries into the last third. Musty baking spices come through on the retrohale. As it progresses, some mild bitterness comes into the post draw. Toasted nuttiness moves into the middle of the profile as the last third continues.
Jiunn: There isn’t much to write about for the final third as it’s still dry cocoa and cedar focused. But this time around, the cedar note is highlighted just a tad more. Strength and body finishes the same medium. 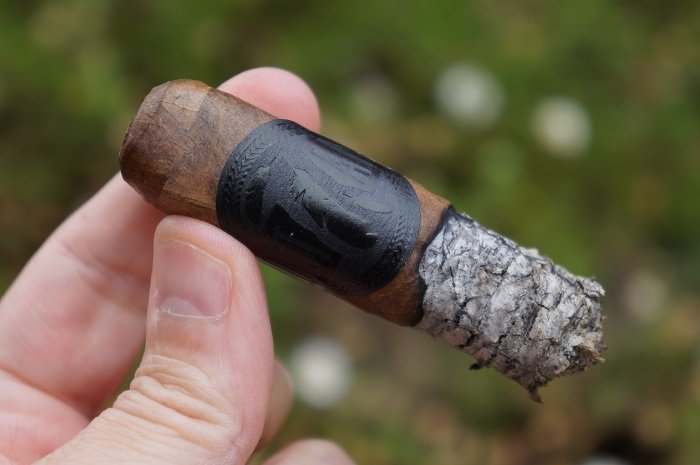 Aaron: The burn line was slightly wavy at times, but never required any intervention. The ash held on in inch and a half increments.
Seth: Great burn from start to finish.
John: The burn was straight through the review, with a bright, white ash. The ash held on up to two inch increments.
Jiunn: Burn performance was spot on. Tight ashes, even burn line, cool burning temperature and good smoke production. 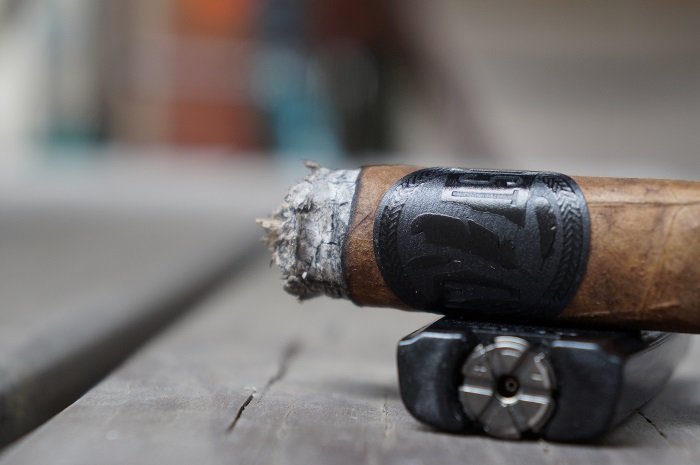 Aaron: The draw was perfect, with just the right amount of resistance that I prefer.
Seth: Perfect draw.
John: The draw had some minor resistance to it, roughly 1-1/2 to 2 notches towards the resistant spectrum.
Jiunn: The draw was also spot on, giving the ideal air flow.

Aaron: The cigar had a fairly average flavor profile that was pretty consistent throughout. The final third saw the toast and smokiness levels increase. Construction was great. Overall, the Crowned Heads The Lost Angel TAA 2021 was fairly linear and didn’t provide a flavor profile that really captured my attention. It’s very wood and earth driven. It’s not something I really see myself coming back to.
Seth: I have been pleased with almost every release coming out of Tabacalera Pichardo. Whether it is a release for Huber, or someone else, the factory has put out blends to my liking. In fact, I think the releases from Huber out of Pichardo are superior to My Father. The Crowned Heads The Lost Angel TAA 2021 did a good job of balancing out Mexican San Andres and Brazilian Mata Fina, while having them be the focus of the blend and delivering their positive qualities. The cigar had a nice balance between sweet and spicy, and the earth presence was perfect as well. With that, you can’t go wrong with a matte black band. It just looks awesome.
John: The Crowned Heads The Lost Angel TAA 2021 is a fairly consistent offering from Crowned Heads, providing a medium strength engaging flavor experience through the first and second thirds. Construction was excellent with only a mild amount of resistance to the draw. Even the price on this offering is reasonable, considering the TAA nature of the release. I would smoke another The Lost Angel TAA 2021 again if I had the opportunity. Total smoking time was 1 hour and 50 minutes on the nose.
Jiunn: Overall, the Crowned Heads The Lost Angel TAA 2021 didn’t provide me enough consistency to be deemed as a good cigar. If all three thirds tasted like the first third of dry cocoa, baking spices, a punchy cedar and black tea on the retrohale, I would have thoroughly enjoyed the entire cigar. But by the second third, there was too much dryness to the profile and the two notes of cedar and dry cocoa proved to be mundane.